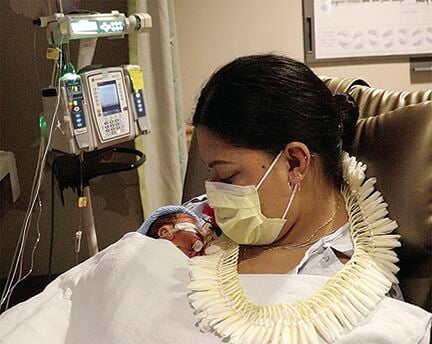 Lavinia “Lavi” Mounga gave birth to newborn son Raymond Mounga on the flight from Salt Lake City to Honolulu, Hawaii. Thanks to three North Kansas City Hospital nurses and a doctor from Hawaii, both mother and child are doing well. 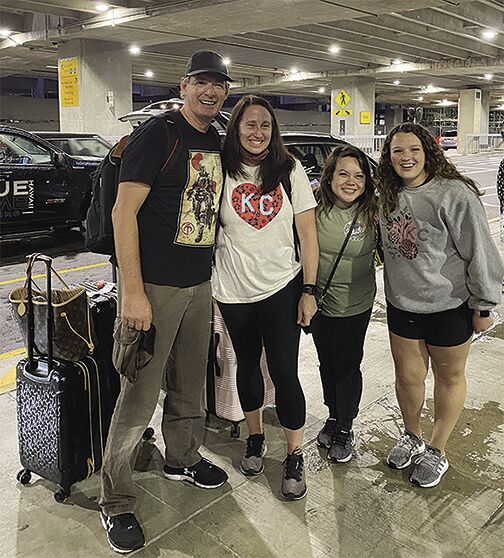 Dr. Dale Glenn and NICU nurses Amanda Beeding, Mimi Ho and Lani Bamfield pose for a picture after the four formed a medical team aboard a Delta flight to keep a pre-term baby and his mother stablized until they reached Honolulu and the hospital.

Lavinia “Lavi” Mounga gave birth to newborn son Raymond Mounga on the flight from Salt Lake City to Honolulu, Hawaii. Thanks to three North Kansas City Hospital nurses and a doctor from Hawaii, both mother and child are doing well.

Dr. Dale Glenn and NICU nurses Amanda Beeding, Mimi Ho and Lani Bamfield pose for a picture after the four formed a medical team aboard a Delta flight to keep a pre-term baby and his mother stablized until they reached Honolulu and the hospital.

What do you call three nurses and a doctor working hard to save a premature baby born on a plane to Hawaii, cruising at around 36,000 feet above the ocean?

For Lavinia “Lavi” Mounga and newborn son Raymond Mounga, the three Neonatal Intensive Care Unit nurses from North Kansas City Hospital and the family medicine doctor from Hawaii who happened to be on the same flight are guardian angels.

Mounga went into premature labor recently on a Delta Airlines flight from Salt Lake City, Utah to the Aloha State. Nurse Lani Bamfield was the first to reach Mounga.

“We thought that maybe an adult had passed out,” said fellow NKC nurse Mimi Ho, “until the words, ‘There’s a baby’ were spoken. Lani got back there to support the baby and Dr. Dale Glenn (Hawai‘i Pacific Health family medicine physician) was able to tie off the umbilical cord.”

Amanda Beeding, another NKC nurse who has been a NICU nurse for almost two decades, stayed with Mounga and support her.

“First, we were crowded around the bathroom so there wasn’t a lot of space to work,” she said. “I stayed with mom and she did great. I could tell she was in shock as she was really quiet, but I gave her some water and in about 15 minutes, she started talking. She was still sitting on the toilet. We got her out of the restroom. She’s a strong lady.”

Passengers on the flight started turning up needed items for the baby. A beach towel provided the first warmth and then a pair of socks was turned into a stocking cap.

“I started thinking we were going to have to do some resuscitation,” Bamfield said. “We found a stethoscope and got a heart rate. The adult masks that drop into case of a drop in altitude provided a mask for oxygen and did the trick. We even got him warmer with Delta bags wrapped around him. Mimi and Dr. Glenn were warming up water bottles to place around him. These steps were repeated often. Then we found a thermometer.”

Glenn’s Apple Smart Watch was placed on the baby boy to keep track of his pulse. The nurses, who were headed for vacation together aboard the flight, praise Glenn for sharing his expertise and support. As airplanes aren’t equipped to provide care for a premature baby, Glenn relied on previous wilderness medicine training.

“The adrenaline kicked in,” Bamfield said. “I kept thinking that this can’t be real.”

While Ho said the nurses are used to being part of deliveries, those deliveries do not typically include being on an airplane.

“We have such specialties and we know what we are best at,” Beeding said. “Collectively, it all works and that’s what we did. Honestly, I started thinking that sometimes we lose the miracle of what we do, but this is that extra pride that I have in my job.”

Once the plane landed, baby and mom headed straight for Kapi‘olani Medical Center.

Afterward, the local nurses were able to enjoy their Air B&B and the vacation they needed after their flight.

“We all have been receiving pictures of Raymond and updates on how well he is doing,” Ho said. “The plan is for all of us to head out to Utah for his first birthday next year.”

All three nurses said God was with them on that flight.

“It was a true miracle that he breathed on his own for three hours,” Beeding said.

The story of the nurses and their delivery of the miracle baby aboard a Delta flight has caught throngs of media attention. Ho said she didn’t realize how the story would be as impactful as it has become. She shared it with her colleagues, friends and family.

“We never expected this sort of exposure,” Bamfield said. “We were confident in our skills and that was most important.”