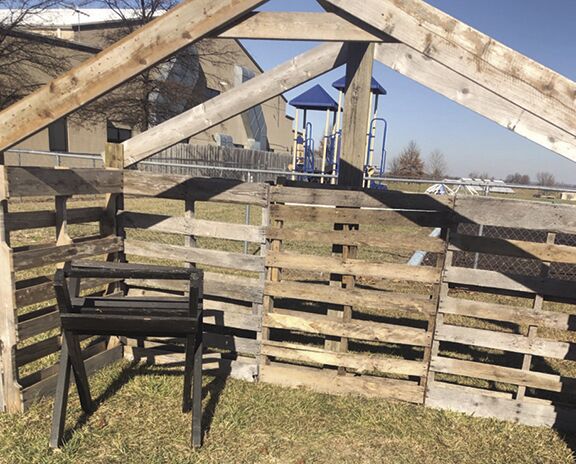 The building crew at Chandler Baptist Church, 11401 33 Highway, have constructed the basic frame for the manger scene for the church's living Nativity, slated for Sunday, Dec. 20. 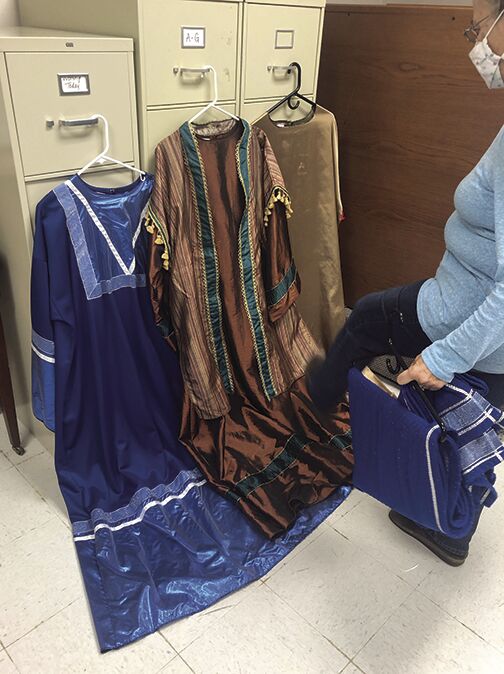 Some costumes for Chandler Baptist Church’s living Nativity has been repurposed from past events at the church as well as handmade by a team of about 30. 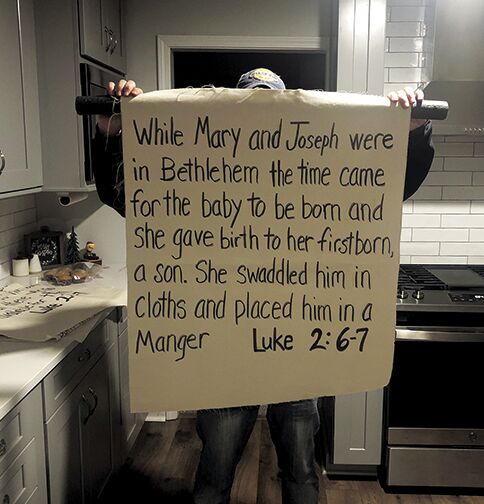 Along with the construction of the scenes, sewing of costumes and more, there is also an effort to make banners of the New Testament books of the Bible and the specific chapter and verses for passers-by.

The building crew at Chandler Baptist Church, 11401 33 Highway, have constructed the basic frame for the manger scene for the church's living Nativity, slated for Sunday, Dec. 20.

Some costumes for Chandler Baptist Church’s living Nativity has been repurposed from past events at the church as well as handmade by a team of about 30.

Along with the construction of the scenes, sewing of costumes and more, there is also an effort to make banners of the New Testament books of the Bible and the specific chapter and verses for passers-by.

LIBERTY — For about 90 minutes during the evening of Sunday, Dec. 20, the congregation of Chandler Baptist Church is hoping to transport visitors to ancient Bethlehem and to a Living Nativity. The church members will create six tableaus or scenes of those centered on the birth of Jesus.

Doug Chatham, who has been leading the charge and constructing the settings for the six scenes, said the scenes are those of Mary’s cottage when she receives the message from the angel Gabriel that she was highly favored and would bear Jesus. Chatham said there will also be the palace of Caesar, the inn where Mary and Joseph tried to get a room, the shepherds in the field and the manager scene.

“We will also have the wise men who come from afar,” he said. “We are fortunate to have the open land at the church and stage these scenes.”

Chatham and his wife, Kim, who is serving as one of the lead coordinators for the event, were part of a nativity about 20 years ago when they lived in Lathrop.

“We talked to our pastor, Sean Taylor, and Kim pitched the idea about a month and a half ago,” he said. “We had thought about it for some time. Everything normal during this time such as Christmas programs or other musical shows has been canceled. An event like this will help create memories for families.”

Kim, who is a nurse, said the event will be done as a drive-thru experience so families can stay in their cars and safe.

“Families will be warm and together in their cars,” she said. “They can see the story of Jesus’s birth.”

The church began work in early December. She said the congregation has pulled together.

“Next year, we will have time to build on this foundation and what we have created for this first experience,” she said. “The joy has been finding the talents in the church. We have people handling music and lights. We are putting these talents to use.”

To add another moment of authenticity, the Chathams also found animals from a group and will have one camel, two donkeys, two goats, two sheep and a cow. The sheep will be with the shepherds. The donkey will be at the inn with Mary and Joseph. Plus there will be animals with the holy couple in the stable, she explained.

“My husband will be portraying one of the wise men and will have the camel in the field,” she said. “I believe we have a lot logistics worked out down to parking attendants who will help with the flow of traffic. I will be running around helping with any issues that evening.”

One issue that isn’t a worry is costuming. Carole Rodgers and Susan Patton are taking the task on. On Monday, Dec. 14, Patton had made six costumes from scratch, but many of the team are taking existing costumes and repurposing them.

“There must have been a show or play many years ago because we have been fortunate,” Patton said. “One of the neater stories in all this, we have had some angel costumes appear, but nobody can tell me where they came from. I am chalking it up to a blessing.”

At the end of the Nativity experience, there will be a chance to donate canned food items or money for the church pantry.

“We started it when the pandemic began,” said Margaret Ann Black, one of the coordinators.

“We are here to help out our neighbors,” she said.

The Nativity provides an opportunity to feed that spiritual need at this time of the Christmas season as well as help to feed others, Kim said.

Cost: free, but a love offering for the food pantry or food donations accepted