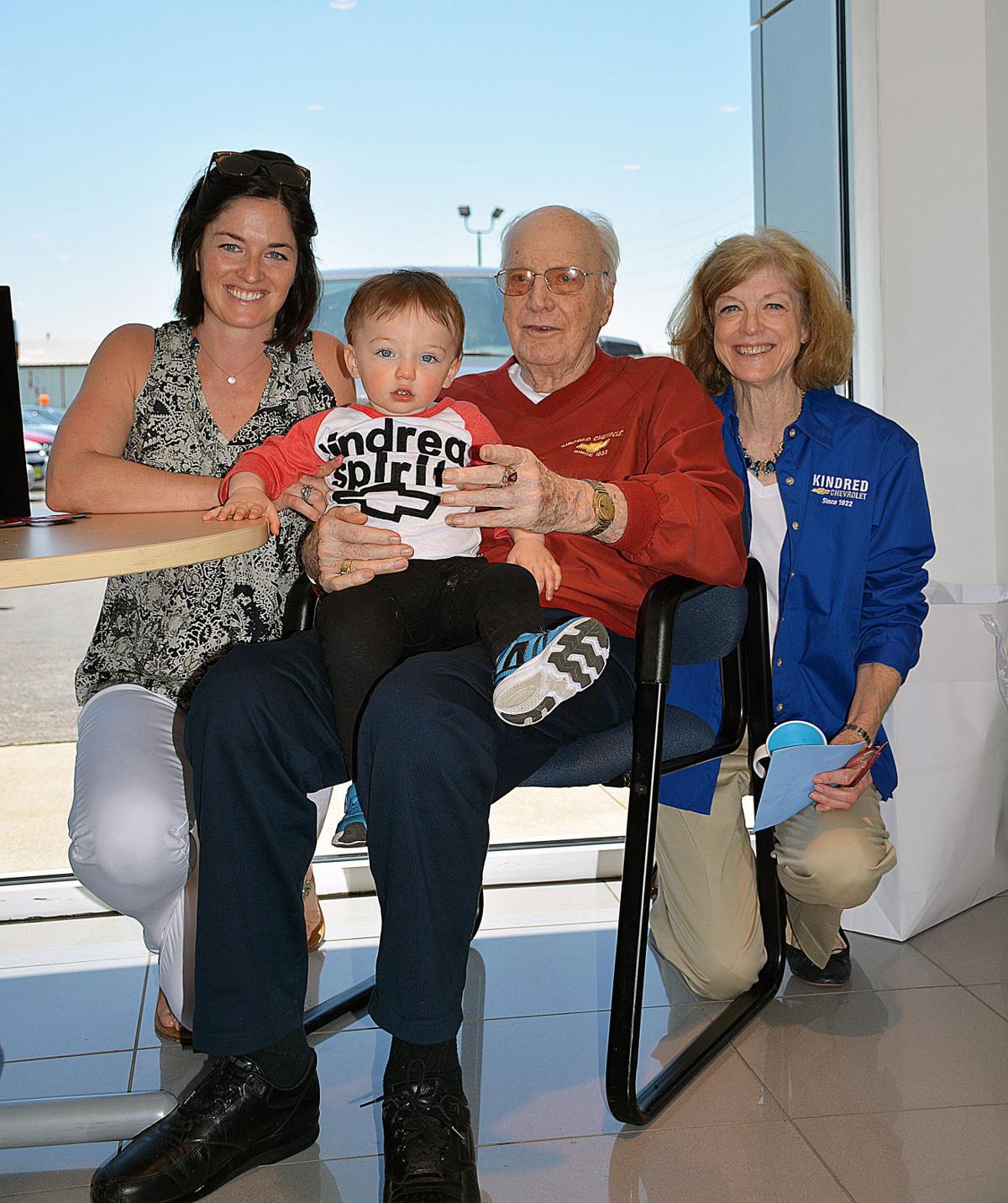 Four generations of the Kindred spirit were on hand at Kindred Chevrolet in 2018 in honor of the dealership’s 95th anniversary. Patriarch and businessman C.F. “Colonel” Kindred, center, passed away last week and is being mourned by those in Smithville. 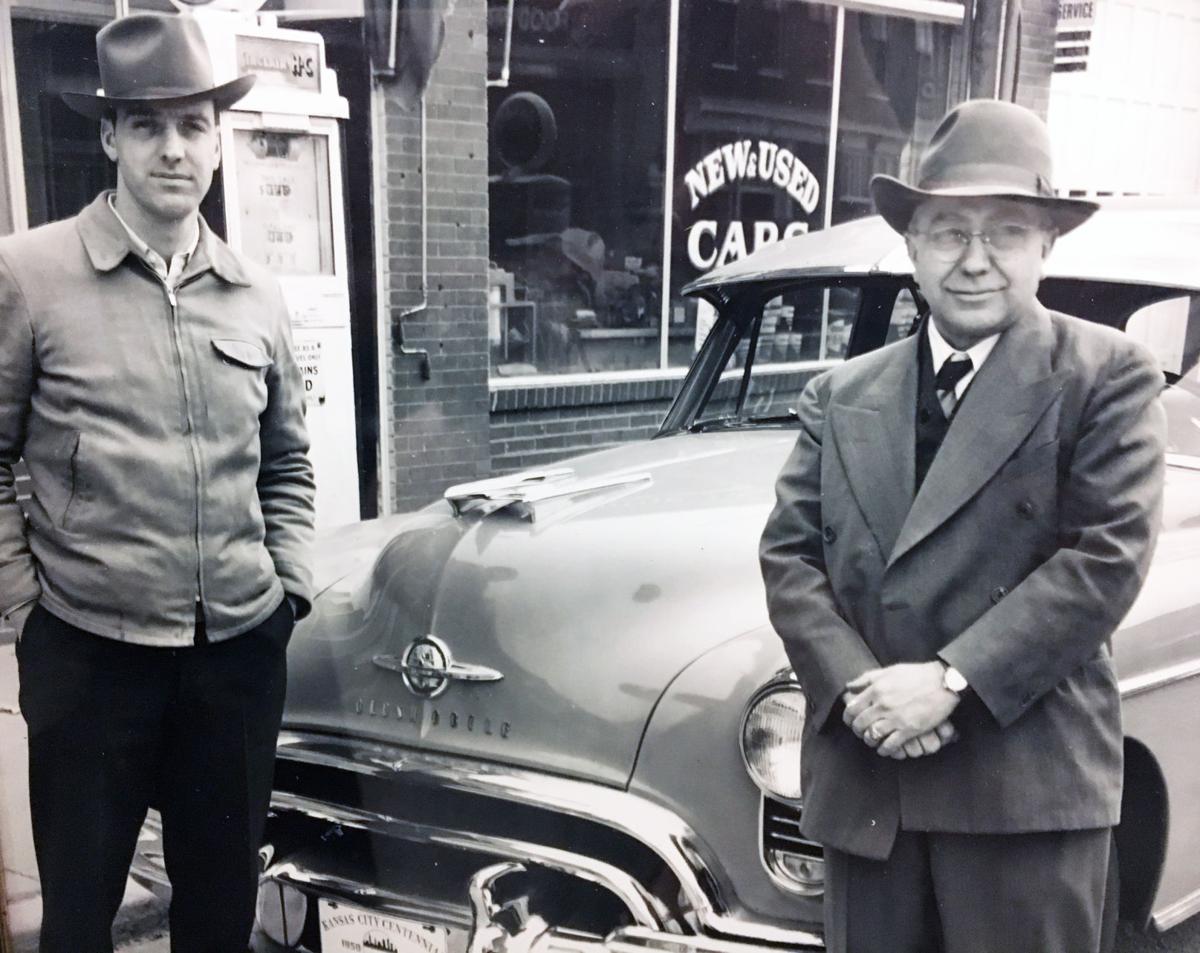 Collins F. Kindred stands with his father, C.C. Kindred in 1950. The family’s Chevrolet dealership, established in 1922, was the oldest family owned dealership in Missouri. It sold in 2019 to Eric Gentry. 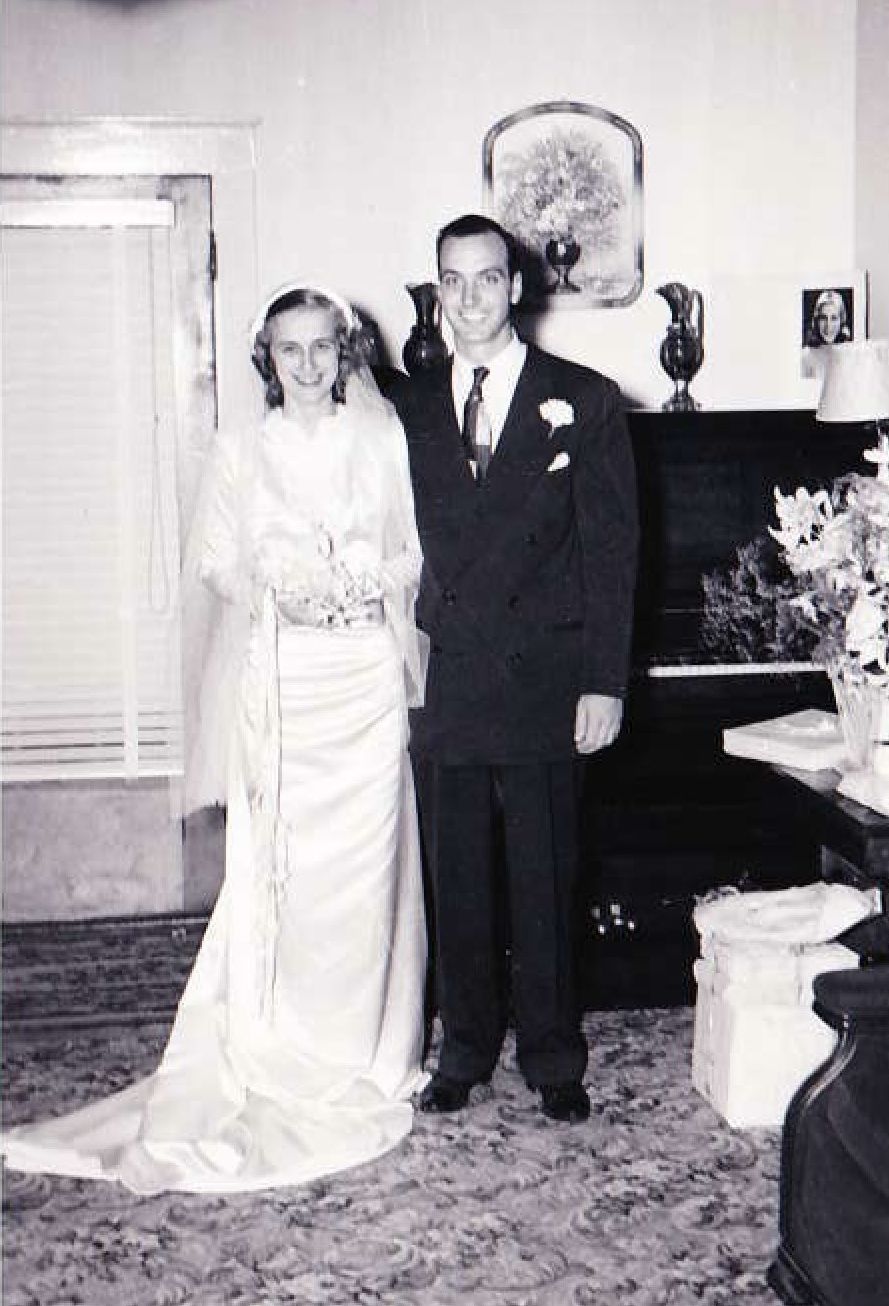 Lou and Collins Kindred, shown here on their wedding day seven decades ago, have lived in Smithville all their lives.

Four generations of the Kindred spirit were on hand at Kindred Chevrolet in 2018 in honor of the dealership’s 95th anniversary. Patriarch and businessman C.F. “Colonel” Kindred, center, passed away last week and is being mourned by those in Smithville.

Collins F. Kindred stands with his father, C.C. Kindred in 1950. The family’s Chevrolet dealership, established in 1922, was the oldest family owned dealership in Missouri. It sold in 2019 to Eric Gentry.

Lou and Collins Kindred, shown here on their wedding day seven decades ago, have lived in Smithville all their lives.

SMITHVILLE — The city of Smithville is mourning the passing of one of its most beloved natives, Collins F. Kindred, known to many as “Colonel,” who passed away in his sleep Wednesday, April 29.

After the initial news of Kindred’s passing was reported by the Courier-Tribune last week, an outpouring of support for Kindred and his family flooded social media.

“Thoughts and prayers to the Kindred family throughout this loss of such an amazing and astonishing man who many admired,” Tricia Edsall posted to Facebook. ”He demonstrated leadership in investing in the community he loved so much, resulting (in his being a) major contributor to the city’s success with many, many, many stories he was graciously willing to share. I’m grateful and blessed to have known (this) icon of Smithville. You will never be forgotten, Colonel.”

Born and raised in Smithville, Kindred grew up being civically-minded. He was active in Boy Scouts during his youth and achieved the rank of Eagle Scout, receiving his honor from then-Sen. Harry S. Truman. He graduated from Smithville High School in 1939. Collins later met his wife, Lou Kindred, a fellow Smithville local, in the late 1940s.

“After I graduated from college, I had only been home a day or two, my mom wanted me to go with her to the ice cream dinner at the Christian church,” Lou said. “Colonel was there at the ice cream dinner. He met me and was talking to me. Then he invited me to play mini golf.”

In addition to his wife, Colonel leaves behind daughters, Carolyn Major and Valerie McClellan; grandchildren; and great-grandchildren.

“One of my favorite memories with Pa was learning how to drive the red pickup truck out in the pasture. Mind you, (my sister and I) were probably 5 and 10ish, respectively,” granddaughter Erin Maconachy said. “I remember bouncing around like crazy and thinking that we were the luckiest kids in the world.”

Maconachy’s sister, Kelsey McClellan, said during the driving lessons, the girls would sit in Colonel’s lap. While he controlled the pedals, they would steer the wheel.

“We have many great holiday memories from their house together, too,” Maconachy added. “I’ll always associate fried okra with Lou and Pa’s house. It reminds me of summer and how many great days and nights we spent together or sleepovers we had at their house, climbing the trees in the backyard. … Pa was so liked and respected and that was easy to see in the dealership or events we attended together in town. He used his 99 years well building a business, a family; fostering ties in his community and telling stories.”

“(There was) joy-riding in the pasture and fishing for bluegill in the pond. Of all of the moments we’ve had together, those are some of the ones I carry closest,” Kelsey said.

Colonel liked miniature golf, having built a putt-putt business with his brother, Carolyn said, before Colonel took over the iconic Chevrolet dealership his father owned, Kindred Chevrolet. The family sold the dealership, now Victory Chevrolet, to Eric Gentry in 2019. At the time of the sale, it was the longest family-owned Chevy dealership in the state.

“He never got angry,” daughter Carolyn said. “I worked with him at the dealership and sometimes I would walk into his office and say, ‘We have a problem.’ He would then look up at me and say, ‘No, we don’t have a problem, we have a challenge.’”

“He was an entrepreneur,” Valerie added. “He was always wanting to explore new things.”

Working with Colonel at the dealership was comical at times, colleague Maria Looman said, adding Colonel never met a stranger.

“I would take him with me to the chamber lunch and after the meeting he would have me drive him around Smithville Lake. He really enjoyed that. He also enjoyed talking to customers, there was no stranger to him. He would strike up a conversation with anyone,” she said.

Colonel served as a volunteer firefighter in Smithville in the 1940s and 50s and served in military during World War II. Landing at Omaha Beach as a replacement shortly after D-Day, he served in the Army under Gen. George Patton, fighting across France and Germany in the infantry as a rifleman and mortarman. He was wounded in action and was awarded the Purple Heart. He later was active in the Smithville American Legion post, having served as commander for a number of years.

“He learned a lot from his father about being involved with the community,” Valerie said.

Former Mayor Brian Fullmer said he met Colonel while serving as an alderman years ago.

“I went to visit Colonel and his wife about the new library,” Fullmer said. “We talked about what they envisioned and when I left, I had agreed to support them. That is when I remember first meeting Colonel. He was very gracious. … He was intelligent, forward-thinking and a great asset to Smithville.”

Colonel was also active in the local Masonic Lodge and Kiwanis Club in addition to helping create the Smithville Area Chamber of Commerce.

”He was instrumental in developing the chamber,” Carolyn said. “They used to call it the Breakfast Club. Eventually it evolved into the Smithville Chamber of Commerce.”

“He was always friendly to me and very gracious,” chamber President Scott Pearson said.

Pearson said the chamber board made Colonel an honorary sergeant at arms years ago, a gesture Pearson said seemingly and deeply touched the veteran businessman.

“A true icon of our community is now gone,” Pearson said.

Valerie said Colonel was also vocal when it came to creation of Smithville Lake and its dam, which eased flooding of the area and allowed the city to develop as it stands today.

Prior to the lake, Smithville was prone to flooding, with one flood in 1965 nearly wiping the city from the map. During the flood, the family Chevy dealership was located downtown and nearly lost along with Colonel, a story the businessman and veteran retold several times to reporters and others. After the flood, the Kindred family moved their dealership to its current location along U.S. Highway 169.

Man of many interests

Described by many as generous, humble and patient, Colonel’s children and friends said he was also loving.

“He was a good friend. I knew him all my life,” Smithville resident Don Hanks said. “He went to school with my dad and they played football together.”

Hanks said Colonel was also an avid storyteller who liked to tell him about the good ol’ days.

“My dad had scored three touchdowns during this old game, so there were 18 points. Colonel had caught the ball a couple times and scored two points totaling 20 points during the game,” Hanks said. “... Colonel would tell me that he went around school telling everyone he and my dad scored all the points during the game themselves because he scored those two points. ... I always thought that was a really funny story.”

Colonel played many sports, his daughters said. He liked football, basketball and continued playing tennis until he was 86.

”He would play people my age,” Valerie said. “They would tell me later he beats them every time. He never told us, they would come up and tell us.”

Colonel also liked to sing, having trained at the Kansas City Music Conservatory honing a “beautiful” singing voice he shared in his church choir, his daughter said.

“If there’s an afterlife, he is up there cruising around way above the speed limit in his red Chevrolet pickup,” said Kelsey.

Family of Collins Kindred will have a private burial. After coronavirus recovery increases, the family will have a public memorial service. That date is yet to be determined.