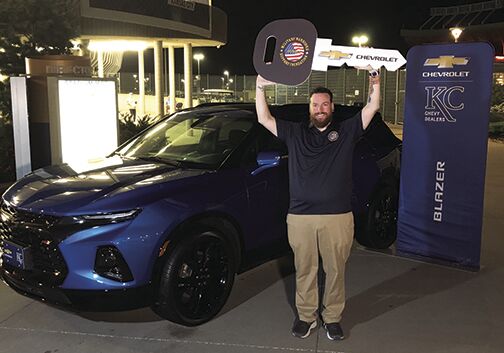 Army Sgt. Josh Peters holds a novelty car key for a Chevrolet Blazer outside Kauffman Stadium. He was gifted the vehicle during a Royals game Friday, Sept. 17, for his military service. 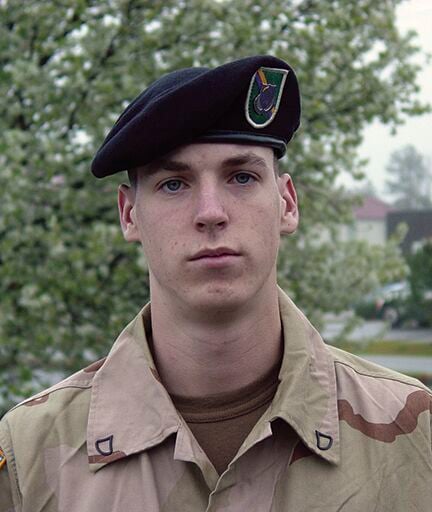 Army Sgt. Josh Peters as he looked during his early days in the U.S. Army. 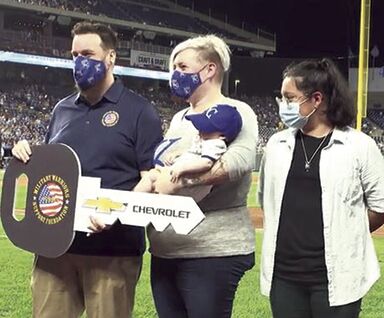 Josh Peters, his wife Kristin, son Ephraim and daughter Hannah stand on the field to honor Josh’s service during the Sept. 17 Royals game.

Army Sgt. Josh Peters holds a novelty car key for a Chevrolet Blazer outside Kauffman Stadium. He was gifted the vehicle during a Royals game Friday, Sept. 17, for his military service.

Army Sgt. Josh Peters as he looked during his early days in the U.S. Army.

Josh Peters, his wife Kristin, son Ephraim and daughter Hannah stand on the field to honor Josh’s service during the Sept. 17 Royals game.

When combat vet Josh Peters got an invitation to the Friday, Sept. 17 Kansas City Royals game, he thought it would be a wonderful gesture to receive a round of applause from the supportive crowd at the K.

“I haven’t been to a game in a while, but I do remember that almost every home game a veteran is honored,” Peters said. “This person always receives a big round of applause and some in the crowd remove their hats to recognize the service of this person. I figured that I would get some of that love and heartfelt appreciation for veterans.”

The game included more than just a salute. The Smithville-born, Northland-raised Peters was gifted a free vehicle.

“I signed up two years ago through the Military Warriors Foundation for a car,” he explained. “The foundation is known to give cars and houses away. I had applied, but didn’t get that one. I went on about my life. I saw another car and went through the vetting process and then there was radio silence. The vehicle was taken down from the website. I figured, once again I had not been chosen to receive the car.”

Then the call to attend the game came.

“We walked onto the field, but it is definitely hard to hear the public address system with the echoes and the applause,” he said. “I don’t believe we were on the field long.”

During the presentation, Peters was recognized as a Chevrolet “Everyday Hero” for his service and sacrifice to the country.

“It is important for us as local dealers to be active contributors in our local communities,” said Karl Kramer, president of Kansas City Chevy Dealers. “This presentation and event is about honoring one of our local heroes who has sacrificed so much to provide us our freedom. It takes great partners like the Military Warriors Support Foundation, the Kansas City Royals and our local Chevy dealerships to help take care of our brave heroes, tell their stories and promote the foundation so they can continue to help veterans in need.”

He served at Ft. Bragg in North Carolina and was deployed to Iraq.

Peters was awarded medals for his bravery and service including the Army Commendation Medal, Global War on Terrorism Expeditionary Medal and a Purple Heart for being wounded on the battlefield. He served until Oct. 15, 2005.

Peters said he has been invited to pick what sort of Chevrolet vehicle that will work best for his family, which includes wife, Kristin; daughter, Hannah, 18; and son, Ephraim, 4 months. He can be specific with what he needs and wants.

“I’m really just speechless,” said the veteran. “It was such a surprise. The vehicle is going to be a huge blessing. We won’t have that car payment and we will be able to save some money. I’ve never had a brand new vehicle. It’s a very big blessing. I’m just so thankful.”