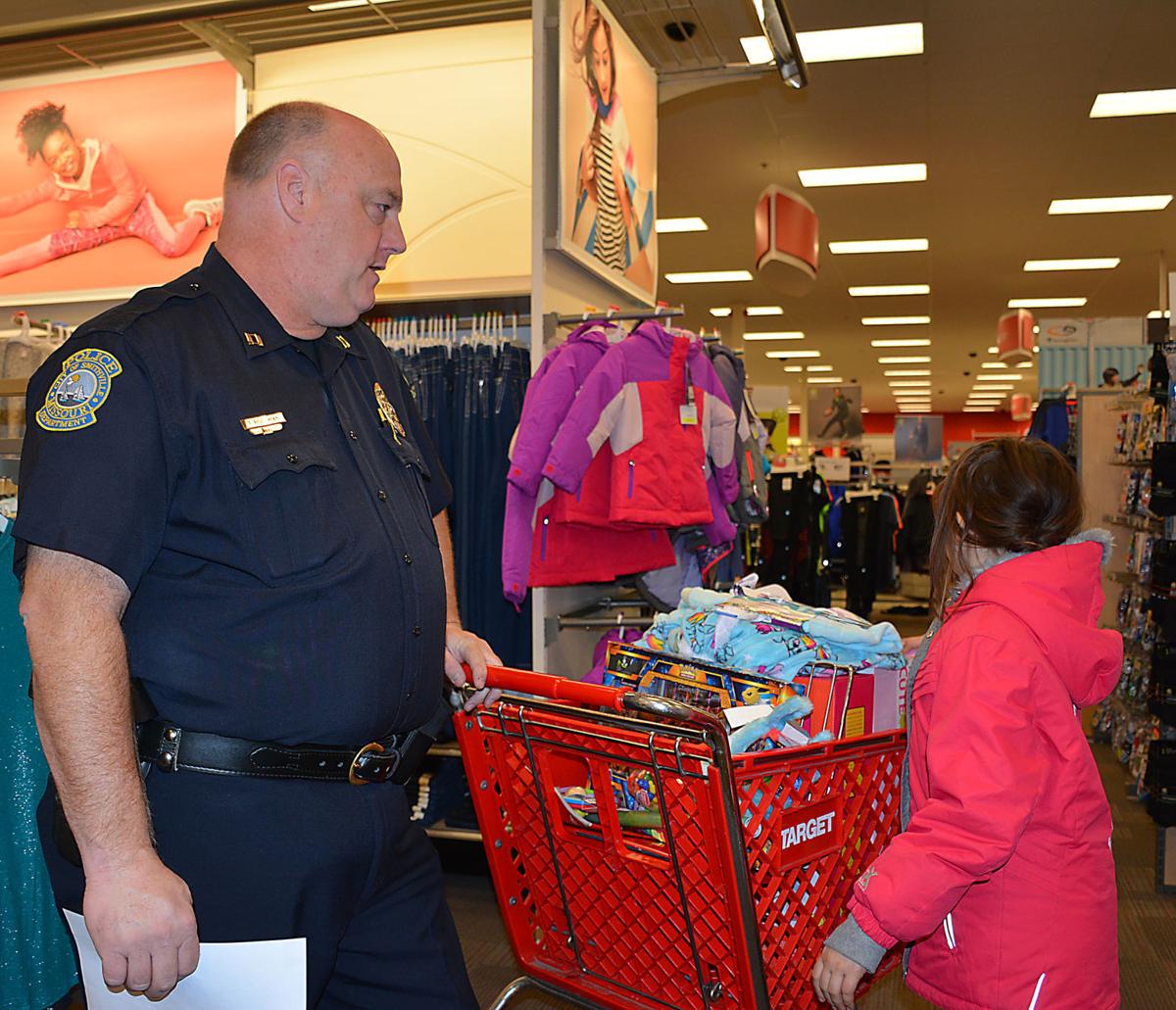 Sgt. Tony Roetman of Smithville Police Department shops with one girl, triple checking her list to make sure she gets everything on it during a previous Shop with a Cop event. 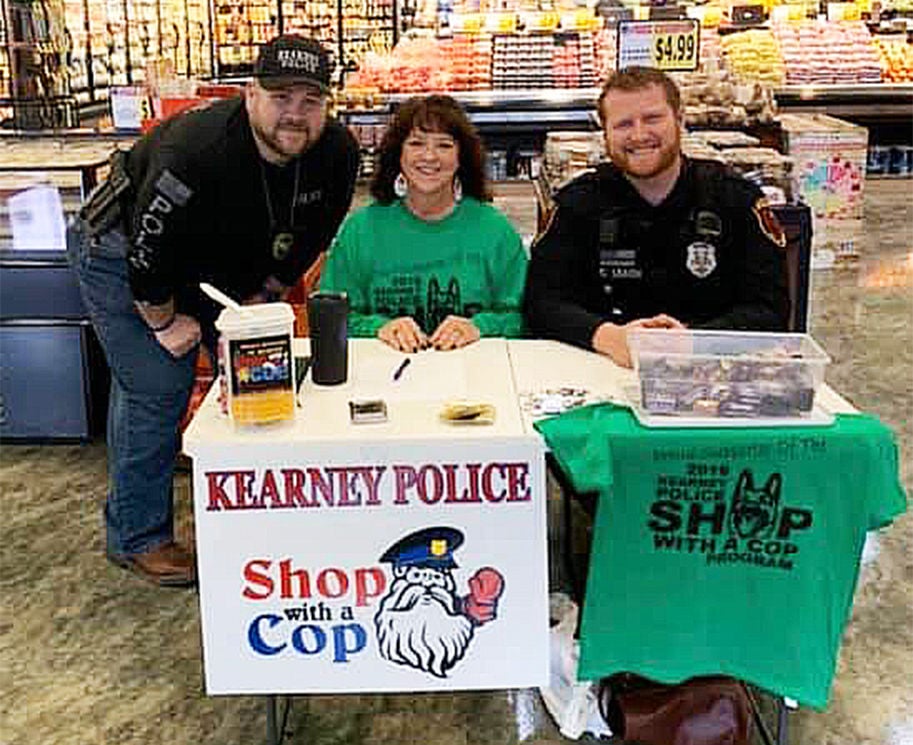 Each year, officers with Kearney Police Department raise funds for the Shop with a Cop program, which takes underserved children on a Christmas shopping spree. In Kearney, officers sells shirts at Price Chopper as well as hold collection events at restaurants.

Sgt. Tony Roetman of Smithville Police Department shops with one girl, triple checking her list to make sure she gets everything on it during a previous Shop with a Cop event.

Each year, officers with Kearney Police Department raise funds for the Shop with a Cop program, which takes underserved children on a Christmas shopping spree. In Kearney, officers sells shirts at Price Chopper as well as hold collection events at restaurants.

In an effort to make spirits brighter, police officers in Liberty, Kearney and Smithville and deputies with the Clay County Sheriff’s Office spend hours of their time each year fundraising for local Shop with a Cop programs. These programs provide thousands of dollars for Christmas gift shopping sprees to Clay County’s youth, making sure the area’s underprivileged children have something under their Christmas tree.

In addition to providing hundreds of dollars for each child in need, many Shop with a Cop programs also provide families with other needed items such as holiday meals and winter outerwear.

This year is no exception. On Saturday, Dec. 14, law enforcement officials and more than 100 children will take to the aisles of area Target and Walmart stores. During the shopping event, officers and deputies will escort children through stores as the youngsters pick out gifts for themselves and loved ones on their shopping lists.

“I do it every year. I love every second of it,” said Kearney officer Marnie Irsik.

There are 50 children signed up for Kearney’s Shop with a Cop this year, which has children identified for the program through Kearney School District counselors.

To raise funds needed, Kearney officers host events year-round at restaurants like D’Creamery and LaFuente as well as sell shirts at Price Chopper. In addition, donation boxes are set up at locations across the city including Mojo’s Coffeehouse, Dollar General and Casey’s General Store.

“All of that money stays here within the Kearney School District,” Irsik said.

In addition to providing Christmas joy to those in need, Shop with a Cop programs provide positive police interactions for those involved.

“It’s nice to let them know we’re not the bad guy,” said Irsik.

Liberty’s Shop with Cop begins at 8:30 a.m. Saturday, Dec. 14, at the Walmart across the Interstate 35 bridge.

Support Services Supervisor Lori Sutton said the numbers are still be finalized, but she expects there will be 17 to 20 kids to take shopping this year.

In its 14th year, Liberty Shop with a Cop started under retired Lt. Duane Davidson, who was directed by retired Chief Craig Knouse, who saw a similar program at another department and knew Liberty needed to join in. Davidson handed the reins over to Sutton.

Sutton said one of her favorite stories came from a shopping event either last year or the year before, when a visit from Santa prompted one of the kids to follow him around.

“It was the sweetest thing,” she said. “We have kids buy for everyone else for their family and they struggle to shop for themselves. That’s another part of this that is moving. It’s amazing that they are thinking about others in the family. Some of the kids don’t know where to start. This year, we are getting a list of their sizes, some of their needs and a few wants as well.”

Once Liberty kids and officers finish shopping, they return to the police squad room for pizza and a wrapping party officers call “organized and happy chaos.”

“We all look forward to this day,” Sutton said. “It’s good for us and for the kids. It builds a lot of relationships, not only for the kids, but also for the parents.”

So far, over $4,200 has been raised for the Shop With A Cop program this year. Donations are always needed, Sutton said.

“We like to keep some funds coming in throughout the year so we can have a nest egg for next year,” she said. “I love doing this, it means a lot to me.”

This year, 22 children have been identified for Shop with a Cop through the school district, Henry said, noting several of them are siblings. This number varies year-to-year, Henry added, with 22 being more than last year.

“We also have fundraising events throughout the year and have recently included a donate button on our Facebook page, Smithville Police Officer’s Shop with a Cop,” Henry said.

Though most children are identified through the school district counselors, Henry said Smithville’s Shop with a Cop program also takes referrals from community members. The roster is compiled before Thanksgiving, Henry continued, but if there were extenuating circumstances, they wouldn’t turn a child away.

To ensure there is enough money for the program every year, the team collects funds a year in advance.

“Based on previous years, we always try to raise between $5,000 and $6,000. ... The more we raise, the more families we can help,” Henry said. “This year we were very lucky to receive two larger corporate donations/grants, which put us far past our expectation for the year. ... Smithville just loves to give back and we couldn’t ask for a better support system.”

While many Shop with a Cop programs have received enough donations for this year's shopping trip, donations are accepted year-round with funds not used in one year saved for the following year.

In Kearney: Donations can be brought to the police station, 725 W. Missouri Highway 92; given to any officer in uniform; or dropped in donation boxes at businesses seen around the city. For more details, search "kearneyMOpolice" on Facebook.