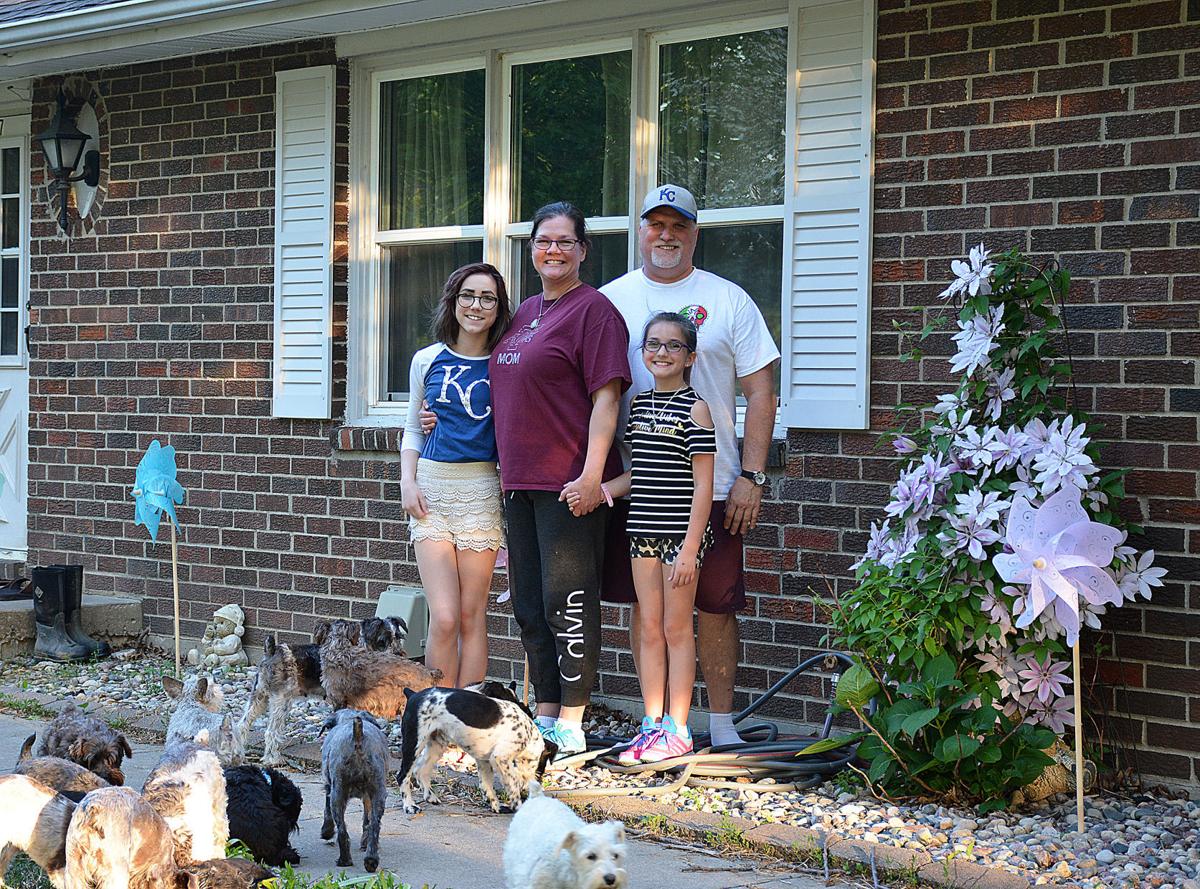 The Eberhardt family members most affected by the paranormal activity, from left, Heidi, Jennifer, Lance and Emi, say activity has calmed down at their house on Northeast 144th Street in Kearney since “The Dead Files” filmed at their home last year. 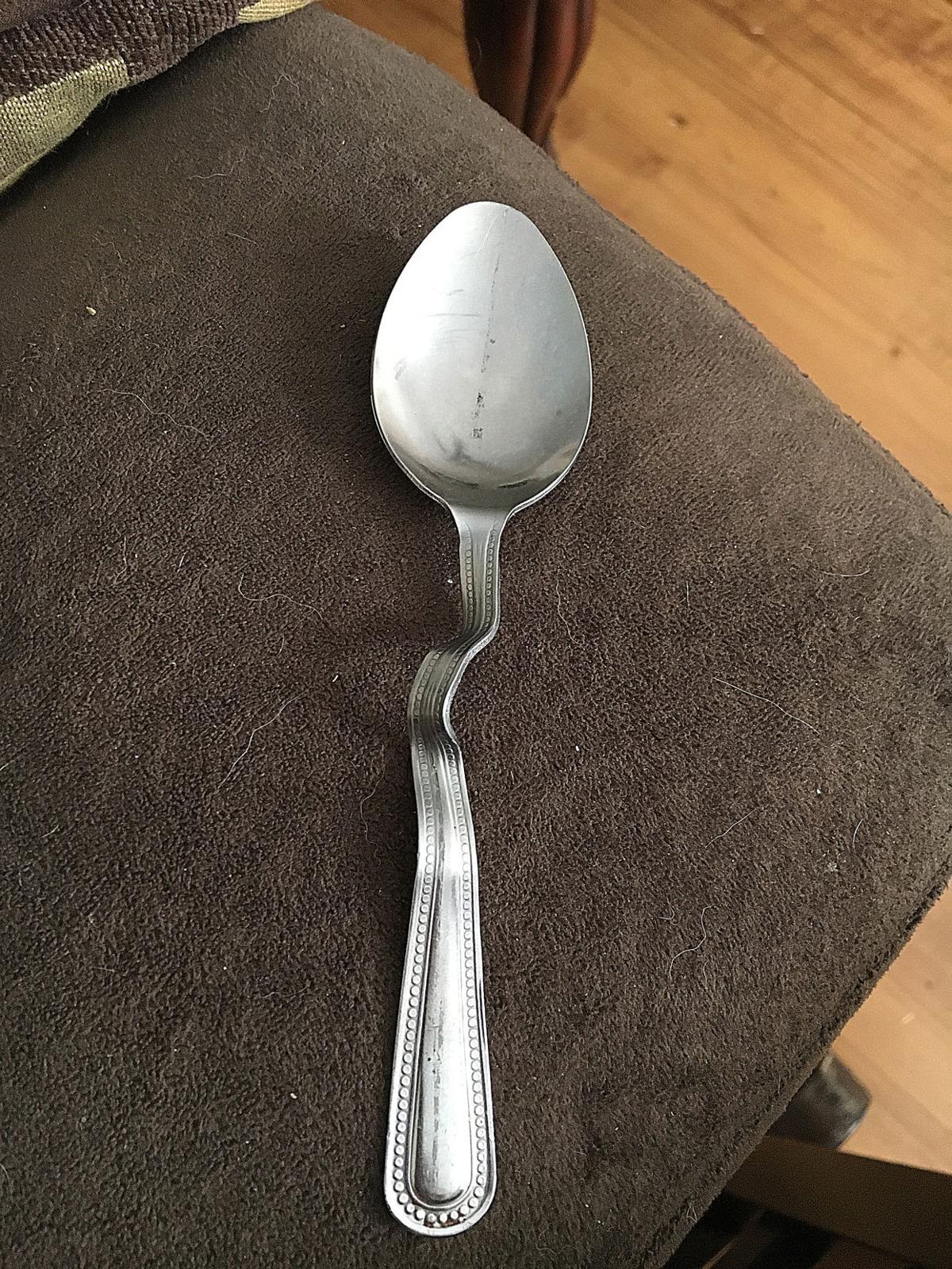 A mysterious spoon found by Lance Eberhardt in the yard has since been twisted and damaged from episodes of it moving on its own, the family says. 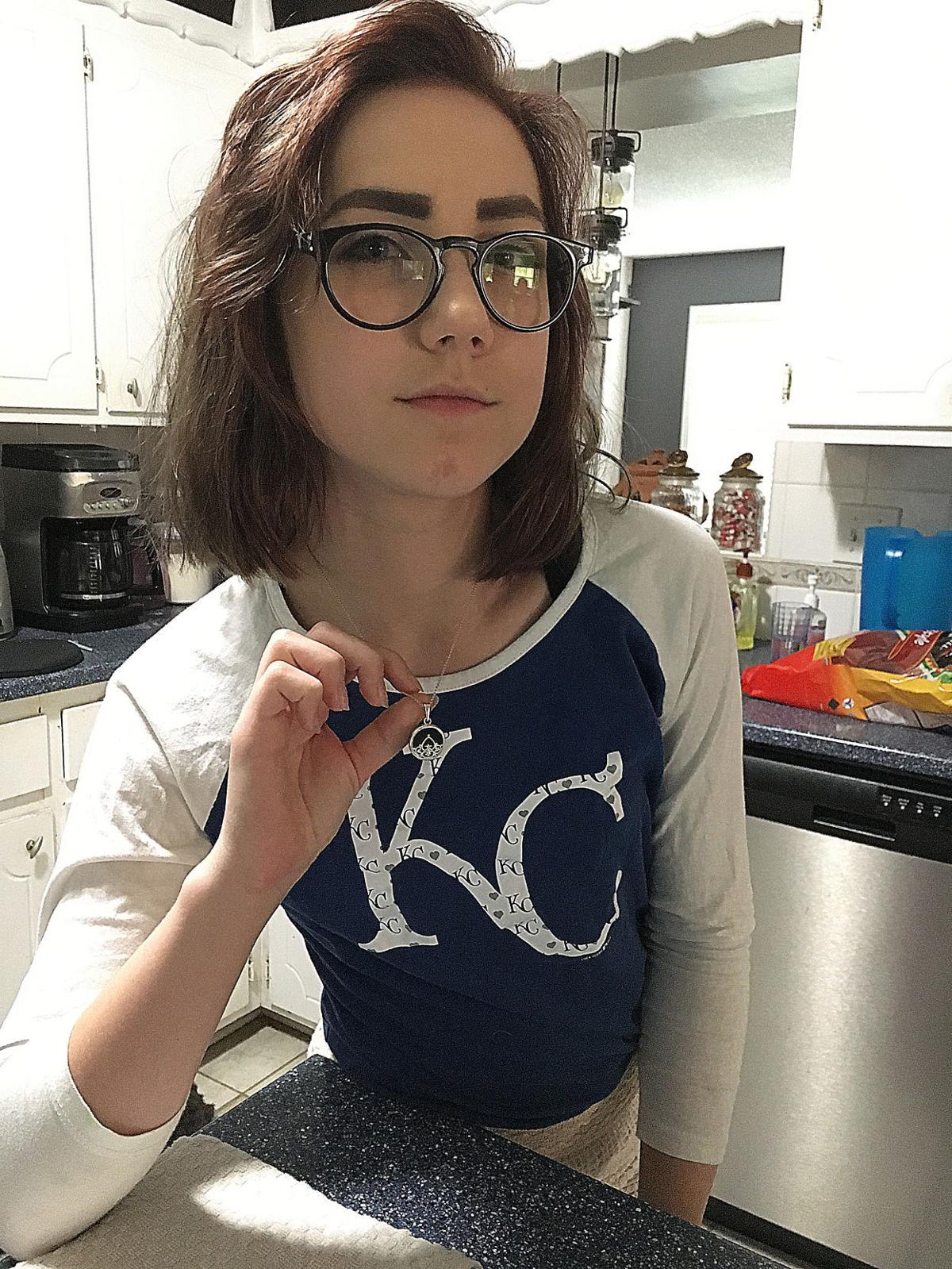 Heidi Eberhardt shows off her protection pendant. All members of the family purchased them under advisement of “The Dead Files” medium Amy Allan. 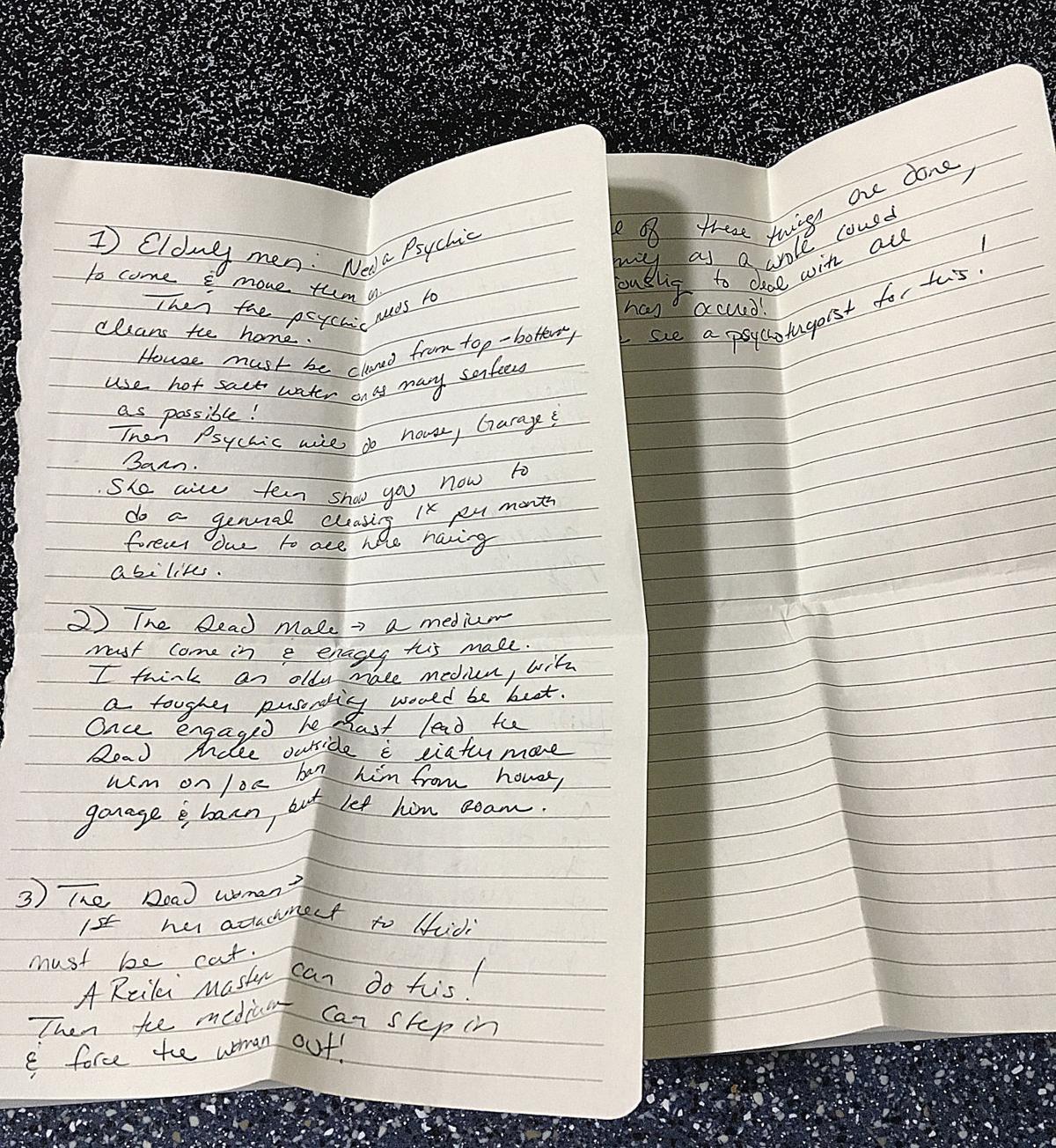 Amy Allan, medium from “The Dead Files” provided the family with notes about how to deal with dangerous spirits in their house. Advice included cleansing the house with salt water and having a Reiki master and medium severe the ties between the spirits and the family.

The Eberhardt family members most affected by the paranormal activity, from left, Heidi, Jennifer, Lance and Emi, say activity has calmed down at their house on Northeast 144th Street in Kearney since “The Dead Files” filmed at their home last year.

A mysterious spoon found by Lance Eberhardt in the yard has since been twisted and damaged from episodes of it moving on its own, the family says.

Heidi Eberhardt shows off her protection pendant. All members of the family purchased them under advisement of “The Dead Files” medium Amy Allan.

Amy Allan, medium from “The Dead Files” provided the family with notes about how to deal with dangerous spirits in their house. Advice included cleansing the house with salt water and having a Reiki master and medium severe the ties between the spirits and the family.

KEARNEY — How would you feel if your family suffered physical and emotional illness including severe stress, sleeplessness, miscarriage, exhaustion, depression, confused memory and unconsciousness after being tormented by an invisible presence at home?

For Lance Eberhardt, it meant living in a nightmarish hellscape of turmoil that left his wife considering leaving the area and moving away their children.

“It’s hell, plain old-fashioned hell,” the husband and father said of what his family had been experiencing at their home on Northeast 144th Street in Kearney. “My family is absolutely terrified. I’m terrified.”

Lance, wife Jennifer, and daughters Chloe, Emi and Heidi live on 15 acres of farm ground that, like many other properties in the area, have possible historical ties to the Civil War era. Also like claims made about several other properties, the Eberhardts say their property is haunted.

Unlike many others, however, the family said the hauntings became sinister in recent history, causing knives to fly across the kitchen cutting Lance; residents to feel like they are being choked in their sleep; and matriarch Jennifer to feel like her legs are being slammed into her bed, waking her and leaving her frightened.

“We’ve woken up with marks on us, scratches on our necks and arms, and had bruises we didn’t know how they got there,” Jennifer said.

Other unhinging incidents include shadowy and life-like figures being seen in mirrors, in rooms and throughout the property that vanish; hearing a disembodied woman’s screams; seeing a spoon and kitchen drawer repeatedly move on their own; and seeing ominous messages such as “Die, die, die” and “will kill him” scrawled on walls and etched into the back of silverware.

The spoon, Lance said, was found in the yard. After thinking it belonged to the family, he said he brought it in the house. Then it began to disappear, reappear and move on its own.

“One time it was left on the counter and our spoon was there, too. The next morning it was till there, but it was wrapped twice around our spoon,” Jennifer said. “It was tightly wound, and it’s not something you can just bend like that.”

“It was like somebody took it and was tying a knot,” Lance added.

There have also been disturbing occurrences while the children have had friends over. Those incidents, such as visitors hearing a woman’s panicked scream, meant the children stopped getting visitors often from those outside the family.

Emi said the incidents were scary, and that she told one friend, but not others for fear of scaring them.

There were even incidents, Jennifer said, of her husband being possessed that included him — unknowingly in his sleep — writing lengthy letters in different handwriting using different vocabulary and speech patterns.

“It really got bad when he was possessed four times in one day,” she said. The incident made Jennifer flee the home and call police.

“I just told them, ‘I know it sounds crazy but my husband is possessed,’” she said.

After owning the property for nine years, hearing the previous owners never had an issue, and experiencing months of repeated and escalating frequencies of occurrences, especially those terrorizing his young daughters, ages 12 and 8, Lance said he came to realization that logic couldn’t explain or remedy what was happening. So he sought out paranormal investigators to come to the property.

“It’s a really helpless feeling when your youngest daughter runs to you for protection and there’s nothing you can do,” he said.

As proof of what the family was describing as happening, a video recording of the spoon moving and hopping into a kitchen drawer that opened on its own along with other examples were submitted to what the family thought was the national TV show “The Dead Files.”

After submitting their evidence, Lance said the family was contacted by a paranormal team that came to the home but turned out to be unaffiliated with the TV show.

“They misrepresented themselves completely,” Lance said.

While the team was in the house filming, Lance and Jennifer said, Lance took the team into the basement while Jennifer watched on a monitor upstairs. During the event, Lance, a sizable man, was picked up by an invisible force and thrown against a wall, rendering him briefly unconscious.

“They came running up the stairs saying it wasn’t safe and they needed to get outta here, that it wasn’t safe,” Jennifer said. “... I said, ‘You can’t just come in here and stir this stuff and then leave.’”

After that, Lance said, the family was able to contact the true “The Dead Files,” which came out in May of last year, filming at the family home and other interview locations in the Kearney area, including Fat Boyz Grill & Bar on Washington Street.

In the season eight opener from May 6 titled “Hell in the Heartland,” one of the show’s hosts, Steve DiSchiavi, said the paranormal activity in the home was one of the worst cases he has seen.

The show’s Amy Allan, who claims to have contact with spirits, said the Eberhardts’ property is unlike others she has seen, calling their front yard a pathway for hundreds of spirits.

Inside the house, Allan said she could see three main spirits that are responsible for the family’s issues. One, Allan said, is a woman jealous of others who get attention from Lance. The spirit, Allan said, can physically assault the living and it is as if she feeds off the family, draining their brain power and mental state.

Another spirit is a tall man wearing a hat, which Lance said he has seen more than once. Allan said she believes the man, a menacing and dangerous figure, was trapped in a room by the previous paranormal team.

While “The Dead Files” crew was on the family’s property, Lance said they were respectful, professional and took the family’s concerns seriously.

“They were here for five days. They did shoot about 80 hours of footage. The reveal itself lasted about four hours, but that is only about a 10-minute segment of the show,” he said. “That was intense. We actually had to take a break because Jennifer had a breakdown. It got really emotional. ... It was eye-opening and it was revealing.”

To end the family’s torment, Lance and Jennifer said Allan wrote copious notes on things the family needed to do. Actions taken by the family include having the house cleansed by a Reiki master, an expert in the Japanese technique for stress reduction and relaxation; burning Frankincense; having everyone in the family wear protective pendants; and cleaning the house, especially all surfaces and windows, with salt water.

Since the show, the family says things have dramatically gotten better, with the “hat man” spirit and the jealous woman having gone on, meaning the harmful, terrifying incidents have stopped. All of the family’s related health issues have also subsided.

While the harmful occurrences have ceased, the family said they still have other-world visitors from their pathway property, including a Native American in full war regalia on horseback. Other spirits have moved pictures off walls.

Now, though, the family, which remains open, upbeat and optimistic about their experiences, isn’t frightened and takes it all in stride.

As for his family sharing their story in a national spotlight, Lance and Jennifer said they aren’t worried about backlash, and know many will think they are making up things, appearing on “The Dead Files” possibly for attention, fame or money.

“They didn’t pay us one cent,” Lance said.

“... I’m not worried about it because i just ignore them,” Lance said.

Jennifer had another suggestion.

“I would just say to anyone who doesn’t believe us: Come spend the night in our house.”

Northwest Editor Amanda Lubinski can be reached at amanda.lubinski@mycouriertribune.com or 903-6001.

On "The Dead Files," which airs on the Travel Channel, medium Amy Allan and retired New York Police Department homicide detective Steve DiSchiavi use their skills to solve unexplained paranormal phenomena across the United States.

In this series, Allan uses her abilities to communicate with the dead, often reliving their deaths, while DiSxhiavi uses his detective experience to search for physical evidence.

For more details on the show, go online to http://www.travelchannel.com/shows/the-dead-files.