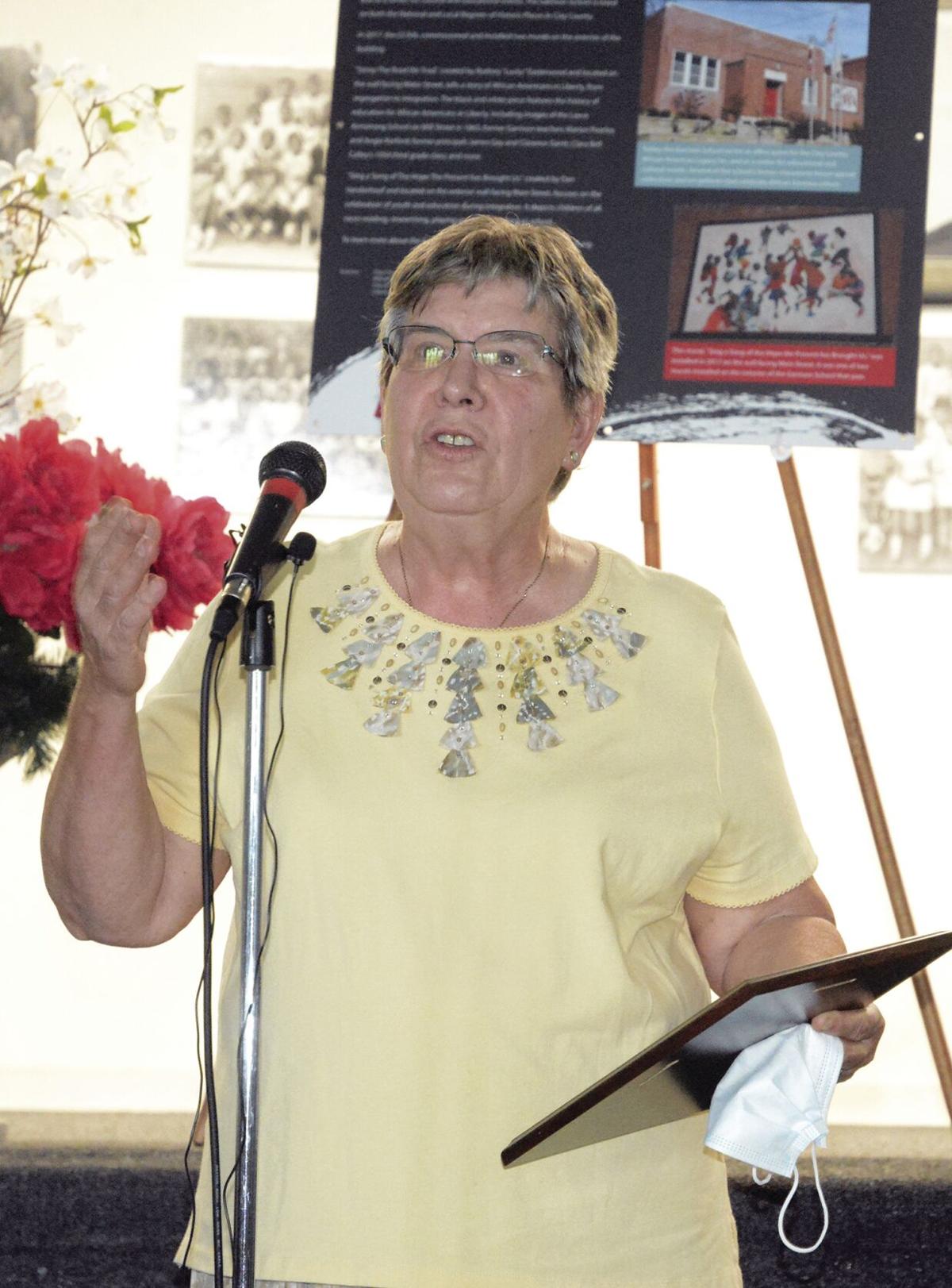 Mary Ann Pfeifer shares words at the Clay County African American Legacy Juneteenth celebration earlier this year. She recently received a 70 Over 70 award for her continuing efforts to feed senior citizens in her community. 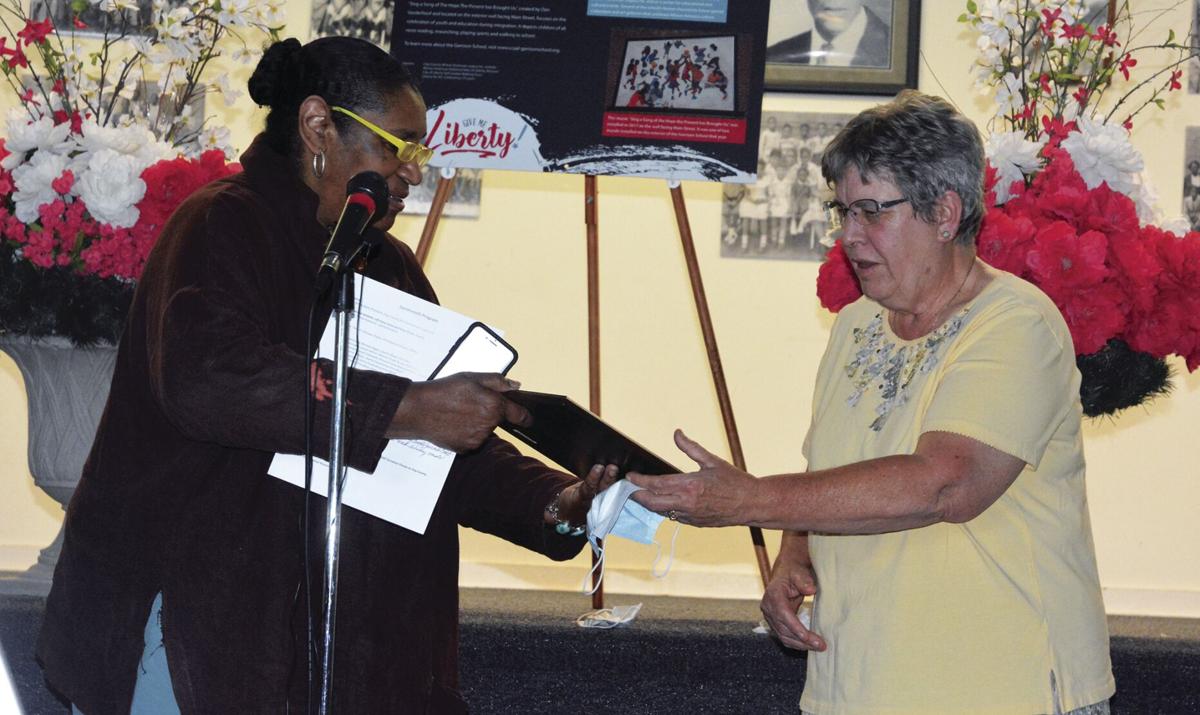 Mary Ann Pfeifer shares words at the Clay County African American Legacy Juneteenth celebration earlier this year. She recently received a 70 Over 70 award for her continuing efforts to feed senior citizens in her community.

LIBERTY — Mary Ann Pfeifer has received two awards this year. The first came from Clay County African American Legacy Inc. and the second arrived last month as part of the 70 Over 70 Awards from KC Shepherd’s Center. Pfeifer was the lone Clay Countian represented in the 70 Over 70 event.

Janet Carlson Baker, executive director of KC Shepherd’s Center, said honorees were nominated during an open process. Winners are selected by a committee of volunteers, the center’s board, staff and community members.

“It is one the most gratifying opportunities to be able to lift up 70 individuals in Kansas City who have made, and continue to make, Kansas City the special community it is through their service,” Baker said. “The breadth and depth of their volunteerism inspires all of us. It is such a joy in the middle of COVID and so many difficult issues we are facing in our country, to be able to just celebrate the positive work and contributions of all these talented Kansas Citians. Don’t we all need something just plain positive right about now?”

The 70 Over 70 Honorees named by KC Shepherd’s Center represent and reflect the diverse interests, accomplishments and lifestyles of older adults who live in the greater Kansas City Community. It celebrates adults who made significant contributions and achievements in their respective endeavors, states a release.

During the presentation, Pfeifer, who was born in Birmingham, Missouri, to a farming family, was also honored for her service of 38 years as a deputy juvenile officer for Clay County.

“I was happy to set up group homes for older teenagers,” she said. “They were set up in neighborhoods not far from the Liberty Square. Both the boys and girls group homes have been an asset.”

Pfeifer literally remodeled and built the group homes. She still fills in at the girls group home on occasion.

While not a woman who seeks out committee work or other roles, Pfeifer is one to dig in when and where she is needed. During her years as a juvenile officer, she began a catering business, Catered Elegance. That led to volunteering her culinary skills to her church, St. James Catholic Church in Liberty, for fundraisers and special event as well as cooking for the Mayor’s Annual Prayer Breakfast in Liberty.

“I joined St. James in 1981,” she said. ”I actually met Father Mike Roach’s sister in Nevada, Missouri. She ended up teaching my three daughters.”

In Nevada, Pfeifer attended Cottey College. Later she attended William Jewell, but according to one of her daughters, Anna Bailey, Pfeifer refused to join a campus sorority because, at the time, they wouldn’t allow women of color to be members.

Prior to COVID-10 hitting, she was hosting and preparing a weekly dinner on Thursday evenings for a group of about a dozen senior women, mostly widows, in her home for fun and fellowship in her large kitchen.

Since the beginning of the pandemic, Pfeifer has used her culinary skills to make a difference in her Liberty community by preparing meals for friends who are high-risk senior citizens. Many are dealing with cancer, heart disease, dementia, Parkinson’s and knee replacement surgery.

“I do what I do partially because of my faith,” she said. “I am 73 years old and I still cook. I have to have people eat it. I am glad to help out with others who are in their upper 80s and dealing with health issues. For good reason, they are afraid to get out.”

Pfeifer said searches for the best deals when shopping for meals to be delivered. Her routine is as follows: Monday’s meal is usually pork or beef; Wednesday, chicken or turkey; and on Friday, it’s meatless or fish.

“No one would make a big pot of ham and beans or stew for one or two,” she said. “I can do that and serve a dozen. It’s easier for me.”

Pfeifer gets referrals from friends or from her church.

“As much as I am providing a meal, I am also there to visit,” she said. “Dr. Cecelia Robinson (at CCAAL) had a medical issue and I took food to her. She was the motivation for both awards. I had COVID myself and my symptoms were mild. I know there are people who are frightened. I protect myself, go shop and make the purchases to help others. It gives me something to do and gives me structure. I have been blessed.”

“My mom, in a nutshell, has a heart of gold and when she sees a problem, she figures out a way to fix it. The most important lesson my mother instilled in me is the call to generosity and charity. She believes in giving back. As she would tell you, it’s not truly giving unless it hurts a little,” Bailey said.

"My mom, in a nutshell, has a heart of gold and when she sees a problem, she figures out a way to fix it. The most important lesson my mother instilled in me is the call to generosity and charity. She believes in giving back."