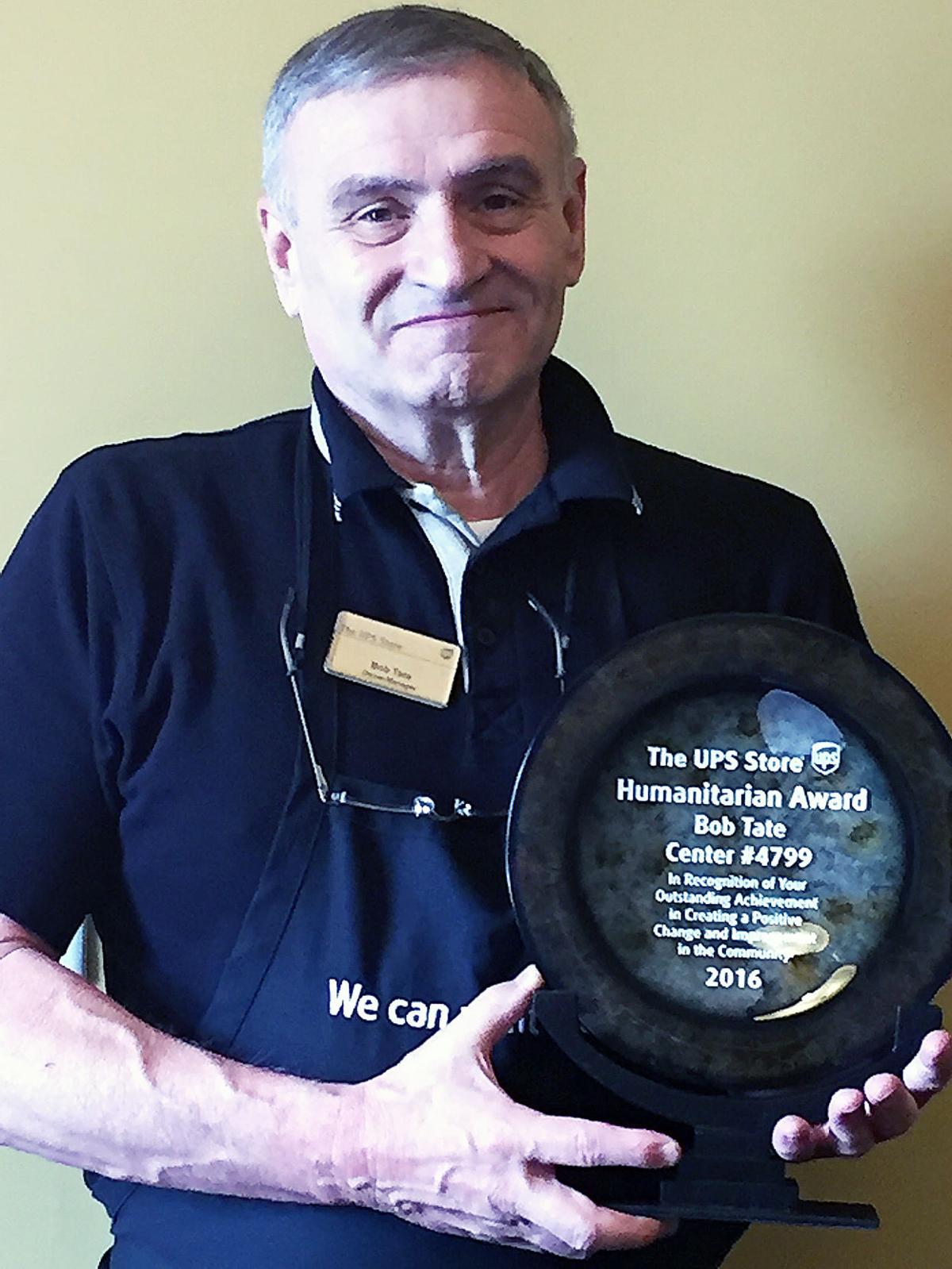 Bob Tate poses with The UPS Store’s Humanitarian of the Year award in 2016. 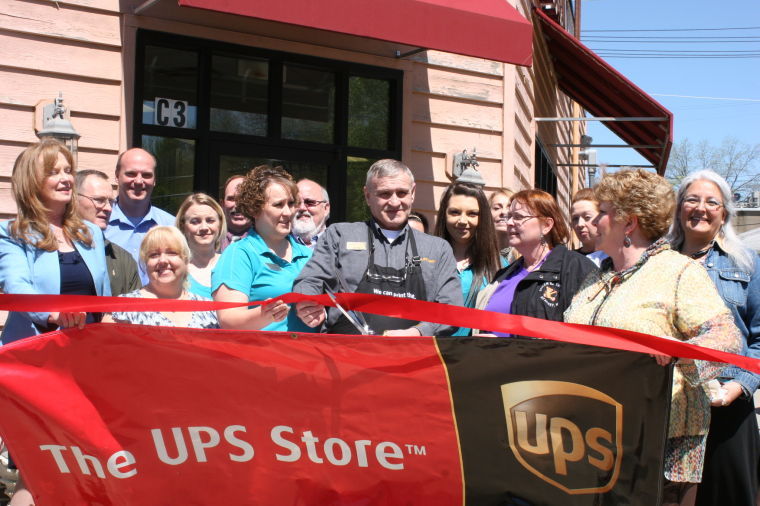 The UPS Store owner Bob Tate cuts a Kearney Chamber of Commerce ribbon in 2015, marking the expansion of his store to nearly twice the size. The Kearney community is now mourning Tate after he passed away last week. 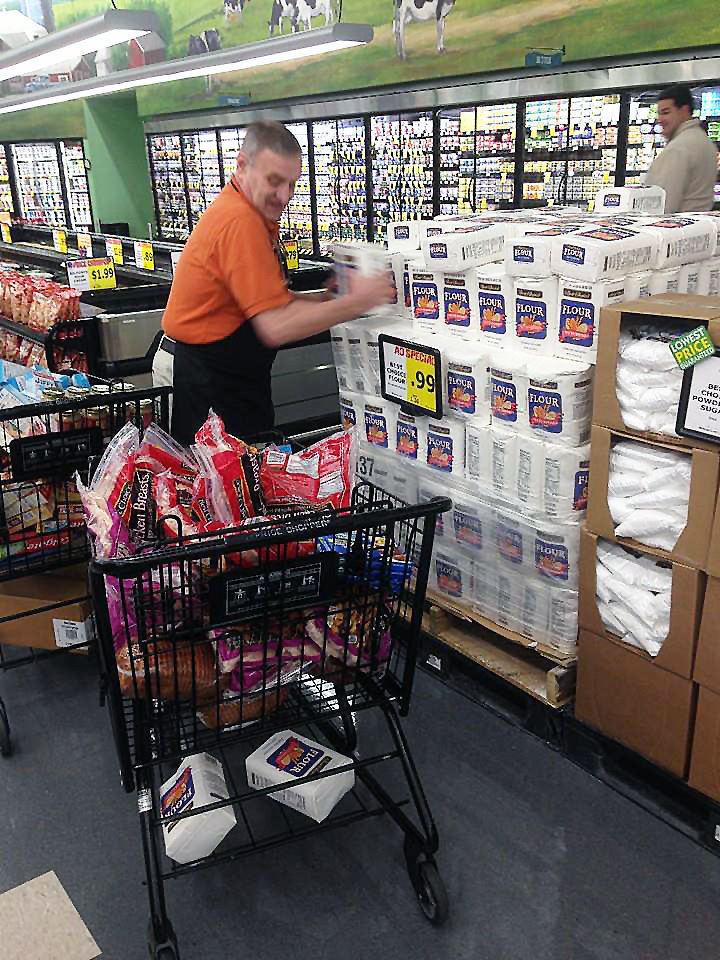 Bob Tate loads flour into one of his carts after winning a five-minute shopping spree in a drawing at Price Chopper, located on Watson Drive in Kearney. Tate donated all of his winnings to Kearney Food Pantry.

Bob Tate poses with The UPS Store’s Humanitarian of the Year award in 2016.

The UPS Store owner Bob Tate cuts a Kearney Chamber of Commerce ribbon in 2015, marking the expansion of his store to nearly twice the size. The Kearney community is now mourning Tate after he passed away last week.

Bob Tate loads flour into one of his carts after winning a five-minute shopping spree in a drawing at Price Chopper, located on Watson Drive in Kearney. Tate donated all of his winnings to Kearney Food Pantry.

KEARNEY — Bob Tate, a Kearney business owner known as much for being a kind-hearted philanthropist as owner and operator of The UPS Store, passed away.

After the announcement, which was also shared on the Courier-Tribune’s Facebook page, an outpouring of support for Tate’s family came from people around the community.

“So sorry to hear this. Bob was a good guy,” wrote Kathy Carlson on the Courier-Tribune’s Facebook page.

“So sad. He was a very nice gentleman,” wrote Cheryl Jones.

Tate bought property and built a house in Kearney in the early 90s after retiring from being a pilot, a career that began in the Marines and continued commercially for Pan Am. Before retiring as a Marine, Tate logged 5,000 hours in fighter jets like the A-6.

“I’ve been around 50,000 feet up, where the sky’s getting a little bit blue,” he once told the Courier-Tribune. “Low and fast, the A-6 was all-weather attack, so it was getting down low using the radar to keep from hitting the hills. It’s pretty intense.”

When Tate decided to plant stationary roots after more than two decades of traveling with the military and airline, he and his wife, Sharon, who also has since passed, settled in Kearney for the top-notch school district.

“Ever since we moved here, it’s been an exemplary school district,” Tate previously told the Courier-Tribune. “It gets high ratings all the time.”

The couple opened The UPS Store franchise in the early 2000s. Tate was a mainstay at the store, always happy to help behind the counter while wearing his UPS apron.

“Bob was The UPS Store,” said retired Chamber of Commerce Director and friend Siouxsan Eisen. “It will not be the same without Bob.”

Thanks to Tate’s business acumen, dedication to customer service and kind-hearted nature that impressed customers, the store became a success with much repeat business, allowing him to expand the operation to nearly double the size. A ribbon cutting for the expansion was in 2015.

“Bob knew how to throw a ribbon cutting. He always was upbeat, had a ton of food, prizes for everyone; my gosh, he threw a great event,” said Eisen.

Tate was also a mainstay in the Kearney Business Group and Kearney Chamber of Commerce, volunteering at many chamber events and serving as ambassador for a number of years. For many, Tate’s was the first face they would see at chamber events as he served as a door greeter for lunch meetings.

“He never missed a meeting. Bob was always there, smiling, looking to get into conversations and tell people stories,” said Eisen. “He was definitely a good one and will be missed.”

In addition to being a respected businessman, Tate was also respected for his generous nature and servant’s heart. Tate’s philanthropic endeavors were many, but often focused on those in need or the community’s youngsters.

Tate served as a leader of the Kearney School District Education Foundation, was the brain trust of the community’s downtown trick-or-treating event, made books free of charge for children beginning school to help ease their fears, was involved with Parents as Teachers and Toys for Tots and was an avid supporter of the Kearney Food Pantry.

In 2015, Tate used his servant’s heart and military-trained mind and body to benefit the food pantry during a five-minute shopping spree at the local Price Chopper. The grocery store was part of a fundraiser for the school district with the grand prize being the five-minute spree, which Tate won.

To maximize his time in the store, Tate scouted the location and completed six timed trials.

“Chance favors the prepared,” he told the Courier-Tribune. “That is the Boy Scouts motto, too — always be prepared. You can’t go into those kinds of things without a plan.”

Bob’s myriad of community service efforts earned him The UPS Store’s Humanitarian of the Year Award in 2016.

“Last year, he won the Excellence in Education award by the Northland Regional Chamber of Commerce for his support of early literacy, early education and the Parents as Teachers program,” UPS District Representative Jeanie Preston wrote in her nomination letter of Tate for The UPS Store award in 2016. “He has donated his time, products and funds in a variety of ways. He assists the school district by serving on the Kearney education foundation board, an organization that raises funds to provide grants to teachers for innovation in education. He is currently the chair of the Teachers Innovation Grant program and spends extensive amounts of time reviewing teacher grants, as well as helping fund the initiative. Bob also lends a hand during events like the Turkey Trot.”

“He also had this really cool presentation he did with the American flag. He would go through everything that it meant. It was really cool,” said fellow chamber member and friend Debbie Holt. “He always did so much behind the scenes.”

Retired Kearney School District Superintendent Bill Nicely said he will remember Tate as a kind and thoughtful local businessman who had a love for country and his community.

”He was the perfect choice to help the Kearney School District reinvigorate the district’s Education Foundation. As one of the first members on the board of directors in that organization, Bob lent his business sense and community contacts to give the foundation the quick start it needed. Bob’s work on the foundation was not for notoriety or to benefit his business, it was for the kids and it’s as simple as that,” said Nicely. “Bob had a soft place in his heart for children, especially those less fortunate. His work in the community, whether it be printing books for kindergarten students or facilitating grants for innovation in the classroom. Bob was all about helping people.”

With Tate’s passing, Nicely said there is now a void in Kearney that “won’t easily be filled.”

Eisen said Tate not only treated his employees, customers and fellow chamber members like family, but everyone in the community.

“Kearney won’t be the same. He was even an organ donor. After he died he is still helping make a difference,” she said.

Powell said her father’s last wish was to be an organ donor.

“We have been told he is helping three different people with this wish,” she said.

Managing Editor Amanda Lubinski can be reached at amanda.lubinski@mycouriertribune.com.

A visitation for Bob Tate will be from 3 to 7 p.m. Saturday, May 1, at Fry-Bross and Spidle Funeral Home in Kearney. Military honors will be at 6 p.m.

Bob is survived by his daughter, Heather Powell and her husband, Michael and their son, Caden; son, Robert and his wife Jennifer along with grandson, Trenton; and sister, Peggy Lush.

Donations in Tate's memory can be made to the Kearney Food Pantry at kearneyfoodpantry.com.