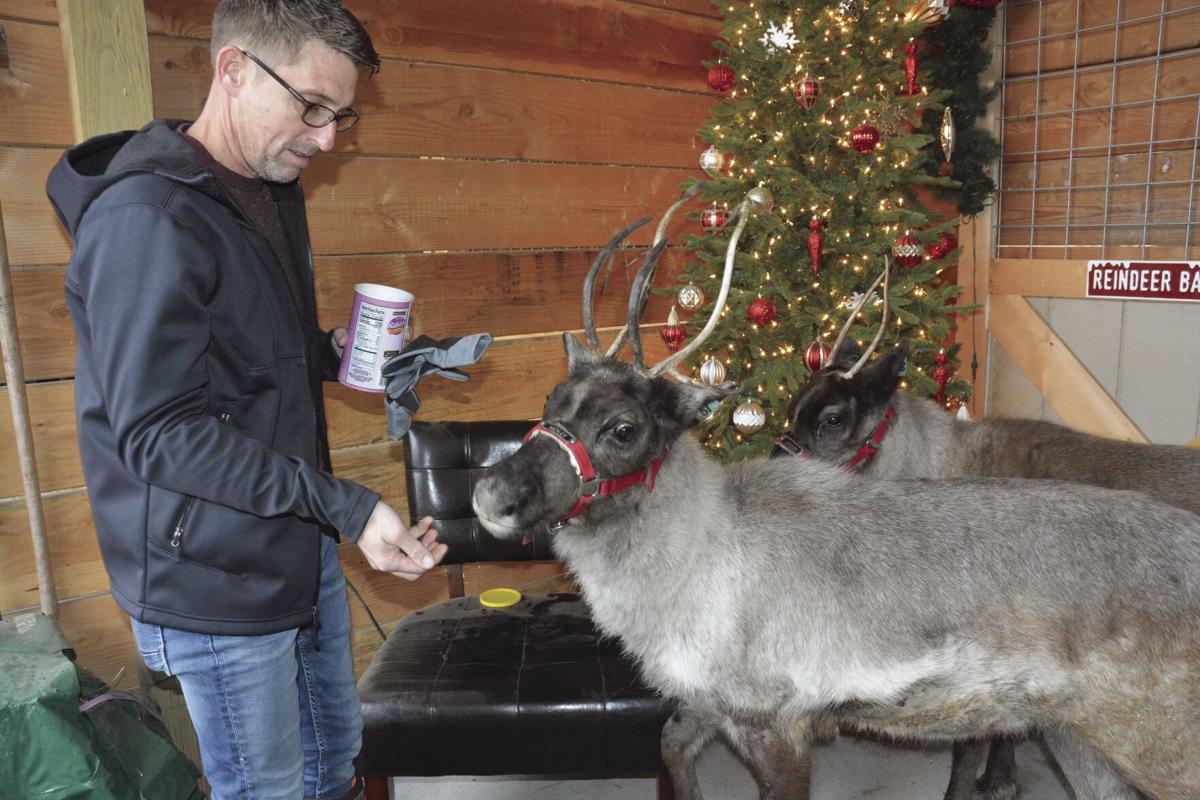 Brian Hamm, a Kearney veterinarian, offers raisins to Holly, one of his three reindeer. The three female reindeer came from Washington state to Kearney in early September. 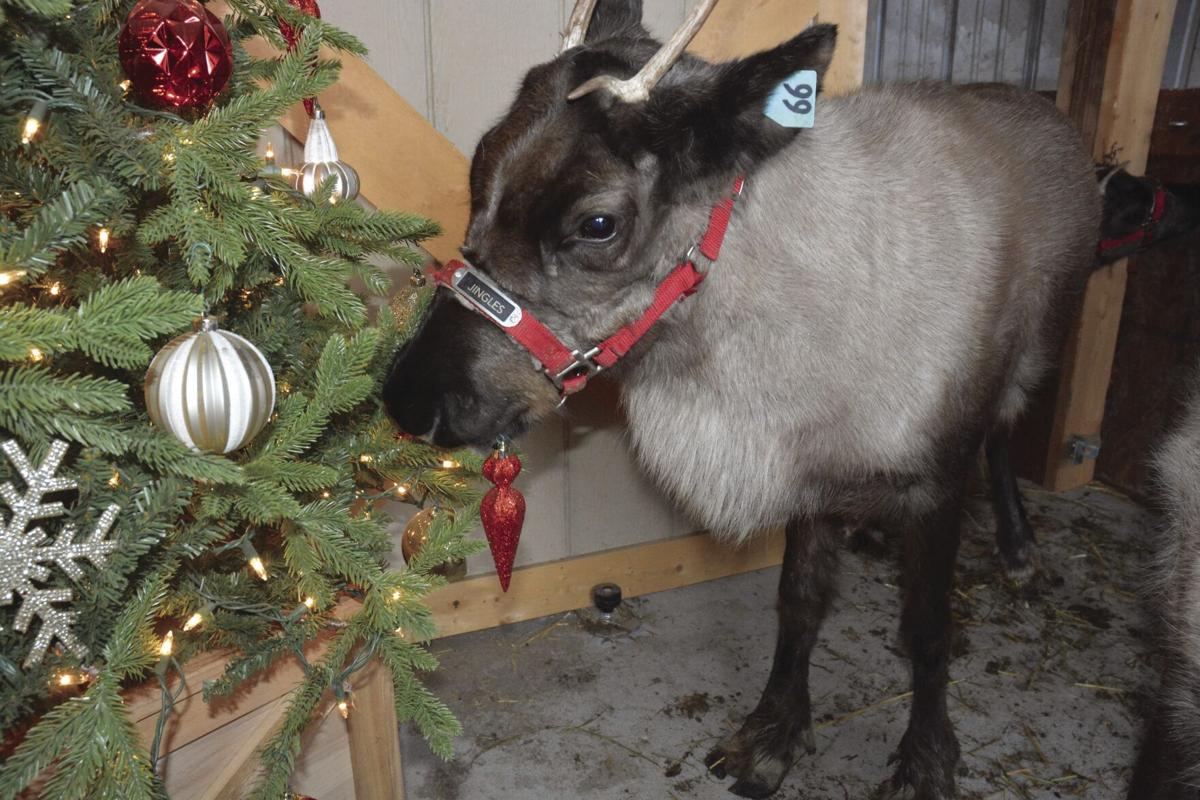 Jingles, one of the three reindeer owned by Brian Hamm, is inquisitive about the Christmas tree in the front area of their barn. The tree is artificial and the ornaments are plastic. 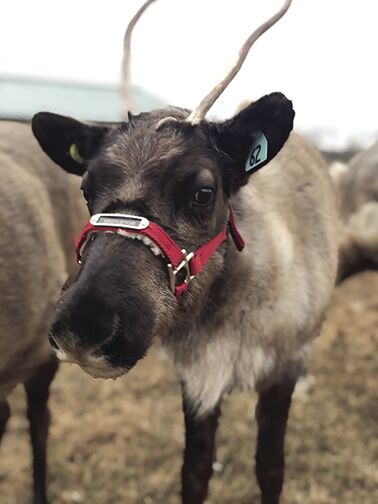 The third female reindeer, Mistletoe, stands out in the pasture at the Hamm farm.

Brian Hamm, a Kearney veterinarian, offers raisins to Holly, one of his three reindeer. The three female reindeer came from Washington state to Kearney in early September.

Jingles, one of the three reindeer owned by Brian Hamm, is inquisitive about the Christmas tree in the front area of their barn. The tree is artificial and the ornaments are plastic.

The third female reindeer, Mistletoe, stands out in the pasture at the Hamm farm.

KEARNEY — With names that arouse sweet holiday dreams and thoughts of Santa, reindeer Holly, Mistletoe and Jingles are making themselves at home in the barn behind local veterinarian Brian Hamm’s home. The trio came to the Kearney property Labor Day weekend from Washington state.

“We worked with them often,” said Hamm. “They came to me with their harnesses, which was a blessing, as I didn’t think it would be easy to put a lead on them as they were nervous. Now, they seem to be enjoying the attention.”

Ahead of Christmas, Santa paid the reindeer a visit earlier in December, taking pictures with the animals and Hamm’s children.

Hamm, who talks to the reindeer just as anyone talks to their beloved cat or dog, said he likens reindeer to a combination of a cow and deer with the disposition of a family dog. They are sweet-natured, curious about their environment and herd minded. Holly leads the trio with Jingles following and Mistletoe bringing up the rear.

The process to get the reindeer was not easy, said Hamm, who was on a waiting list as owning reindeer is highly regulated.

“I had to have the three girls registered with the (U.S. Department of Agriculture) as well as the state,” he said. “At the state level, they are kept track of as the reindeer can be affected by the chronic wasting disease that also hits deer in the state.”

Hamm said the reindeer have a few health issues, but they do enjoy cold weather. When summer rolls around, Hamm will have fans circulating cooler air for them. He will give them time in the pasture during the cooler evening hours.

While Hamm owns the Animal Clinic of Kearney and takes care of hundreds of the community’s pets, he is not allowed to be the reindeers’ vet due to the Animal Welfare Act.

The desire to own reindeer is not one that came impetuously. Hamm, more than 20 years ago, worked on a farm during his schooling, and that farm had reindeer.

“I have loved them ever since,” he said. “I put my name on that waiting list and hung in there. In January, I plan on getting a couple males from New York to join the small herd.”

Their names will also have a Christmas touch as well — Kringle, as in Kris Kringle; and Fraser after the Fraser fir tree.

When the two males arrive in January, Hamm said he wants to eventually have a herd of 10 to 15 reindeer.

“They are beyond my expectations,” he said.

The children also spent time trying to determine the reindeers’ favorite treats. It’s been trial and error with treats like peppermints, dried pineapple and raisins.

“The raisins are the biggest hit,” Charley said.

“They give us such great joy,” Brian said. “It’s also a constant learning experience with them. It’s learning to appreciate their quirks like their grunting or burping. I knew they would be herd dominant, but there are things I am still learning.”

While the reindeer are getting some public attention in time for Christmas this year, Brian said he hopes his new animal additions will bring even more cheer in the year to come.

“While I have been limiting viewings, we did take the girls out to Powell Gardens. They were viewed by a couple thousand people. Eventually, we want them to be part of parades and other events after COVID ends. We pushed hard in training during October to get them comfortable.”

Both male and female reindeer grow antlers. Males lose their antlers in winter or early spring, but females shed theirs in the summer.

Female antlers are significantly smaller than males, but are still sharp. A male's can grow up to 51 inches long and weigh up to 33 pounds, making them useful for fighting. A female's antlers can grow up to 20 inches, according to the San Diego Zoo.

Reindeer toes spread out wide to act like snowshoes, distributing the animal’s weight so that it can move over snow, ice and soft wetlands without sinking.

Reindeer are built for the cold. Their noses warm up air before it gets to their lungs and their bodies, including their hooves, are covered with fur.

Female reindeer have a gestation period of about 7.5 months and typically give birth to only one youth at a time, though they have been found to have up to four young at a time. At birth, a baby reindeer, called a calf, weighs 5 to 20 pounds