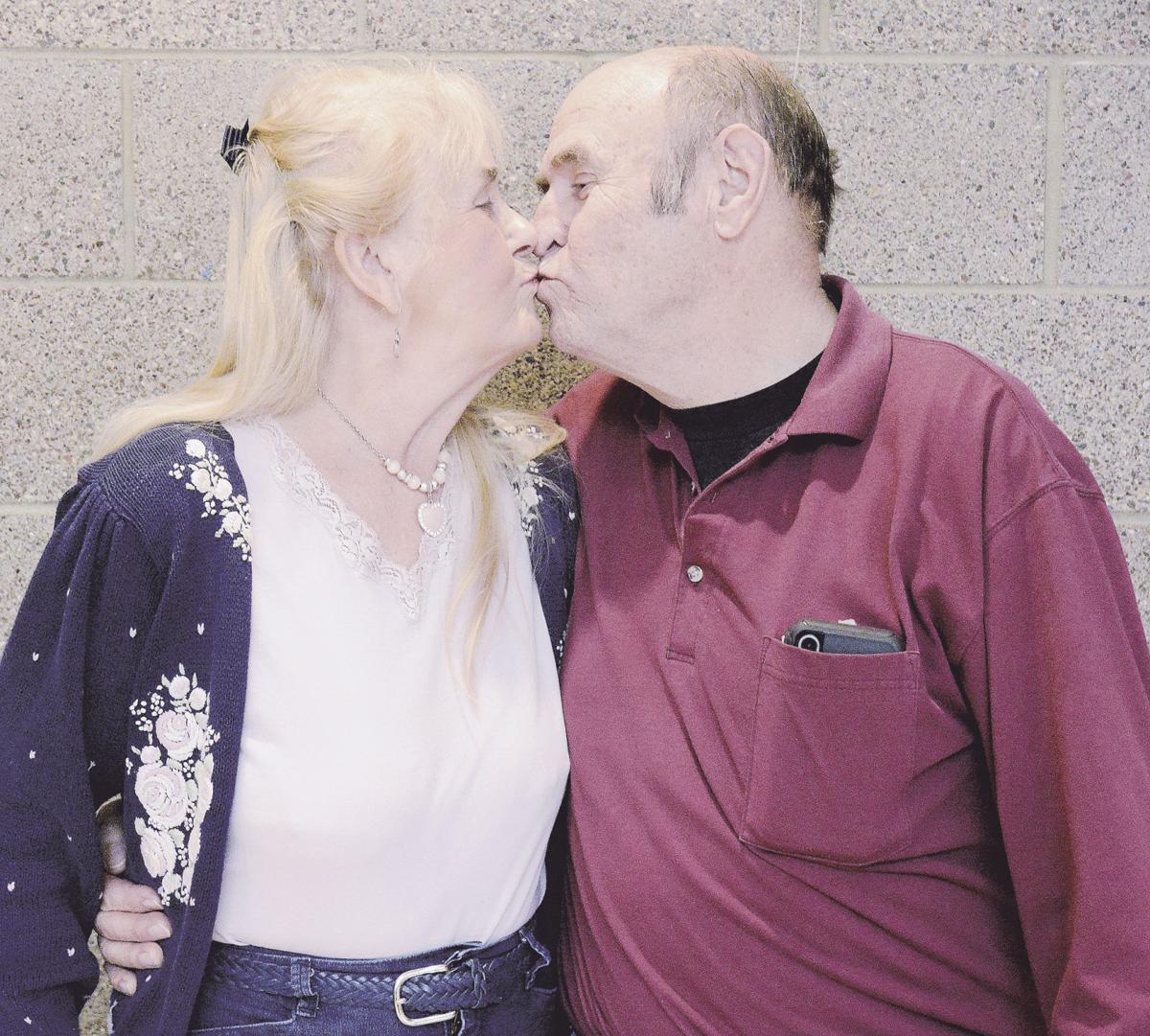 Lilas and Kenneth Scott kiss as the two talk about 56 years of marriage. 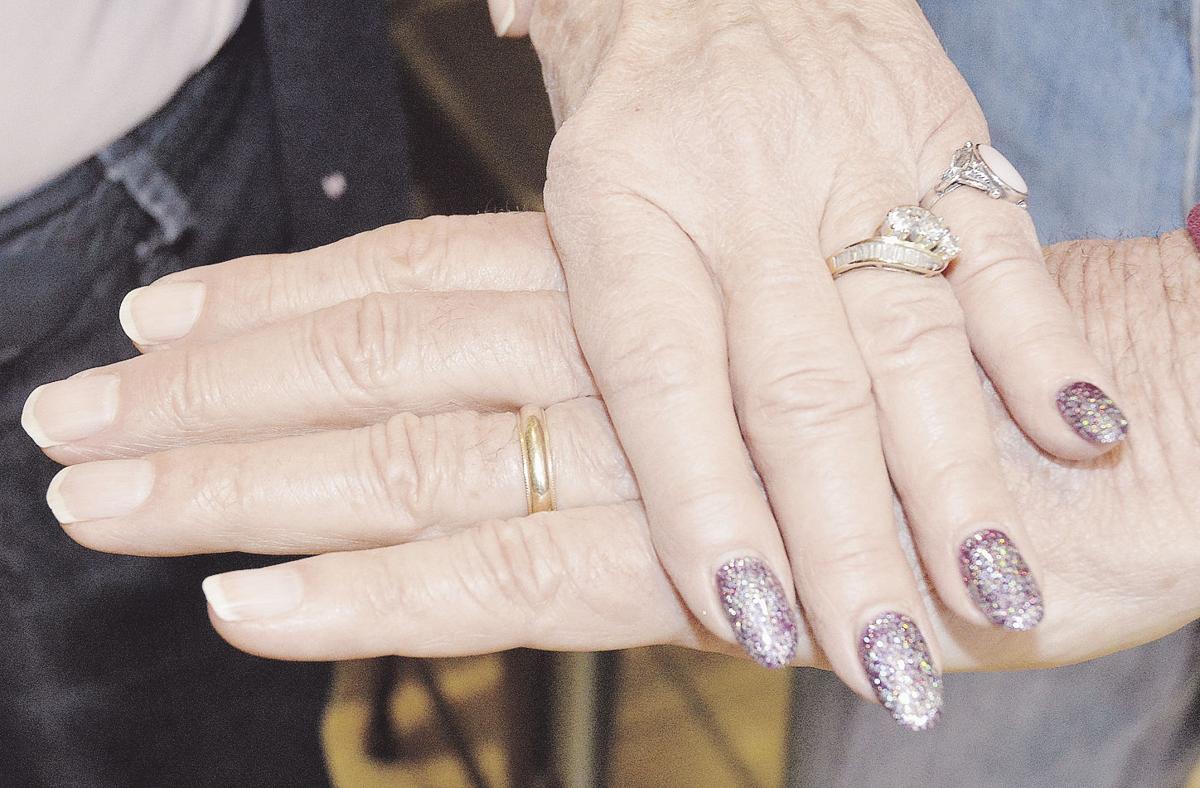 Wedding bands and memories are part of the Scotts' ring sets. The couple sometimes splurges on new rings to celebrate their union. 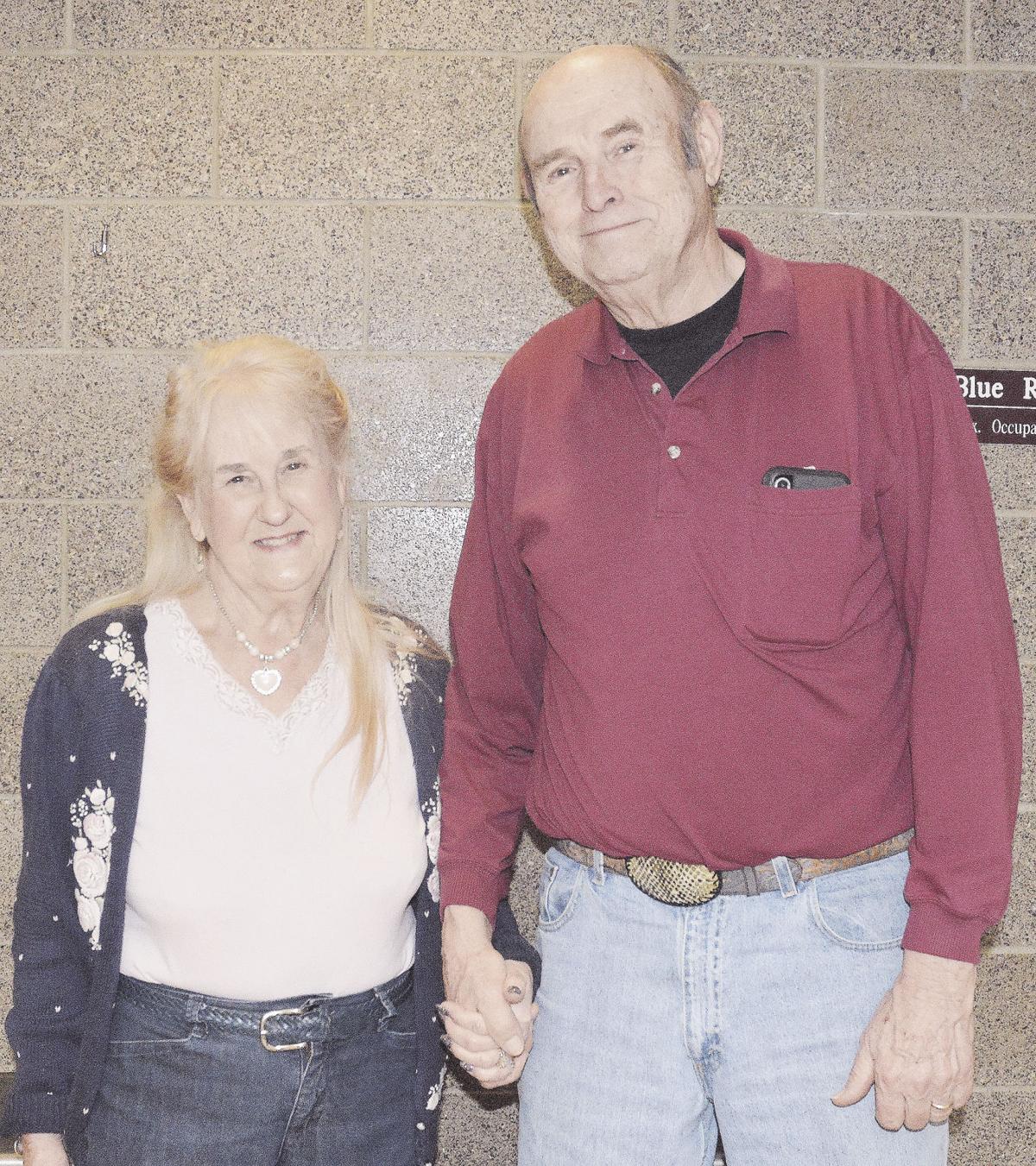 Lilas and Ken Scott also enjoy holding hands. The two attend meals at the Liberty Silver Center and work out at the community center at least three days per week.

Lilas and Kenneth Scott kiss as the two talk about 56 years of marriage.

Wedding bands and memories are part of the Scotts' ring sets. The couple sometimes splurges on new rings to celebrate their union.

Lilas and Ken Scott also enjoy holding hands. The two attend meals at the Liberty Silver Center and work out at the community center at least three days per week.

In honor of Valentine’s Day, we at the Courier-Tribune discussed marriage with three couples who have been married multiple decades. The following includes details on how they met and their secrets to a long and happy union.

Joyce and Fred Kinney of Kearney, married for 59 years, said their love story is one of love at first sight that began at Minnesota State University in Mankato, then a teachers college.

“We we’re playing a game where the girls sit up on top of the boy’s shoulders and you try to knock the other off. … We were 22 at the time. Anyway, he saw Joyce up on those shoulders and he thought I was cute,” said Joyce.

“Oh yeah, you were great,” Fred said to his wife. A year later the pair wed.

Kenneth and Lilas Scott have been in Liberty since 1966. However, the two met about 107 miles south in Nevada, Missouri. Like Liberty, the community had a bustling town square. Lilas worked at Kress, a five and dime on one side, and Ken worked on the other at Midwest Auto.

“I saw a cute little farm girl,” Ken said. “Farm life is tough and I knew she could handle anything that came along. You learn to do without things on the farm.”

Gene and Sharon Irsik of Kearney married 59 years ago after meeting in college, when a long-legged Gene sat behind Sharon in math class and would stretch out his limbs, putting his feet on the sides her desk.

“He had nice, shiny shoes,” said Sharon. “He had well taken care of shoes. They weren’t new, but they were taken care of. I thought that was nice because he cared about himself.”

“I had no place to put them,” Gene said, laughing about his shoe placement, adding he was happy it worked out.

For Joyce and Fred, two lovebirds who still can’t get enough of one another after nearly six decades of marriage, said a key to their happy marriage is togetherness.

“We do everything together. Even when we go out to eat, we share the same meal,” said Joyce.

“It’s also about respect and love and appreciation,” said Fred. “There’s a lot of things you can name.”

For the Scotts, it’s similar.

“We have always been interested in the same things,” Lilas said, adding the pair works well together.

Ken said he enjoys helping her prepare meals. The two even grocery shop together.

If they go out, the favorite destination is Texas Roadhouse. They invite fellow exercisers and those who use the Liberty Silver Center for a birthday meal.“It’s gone by so fast,” Lilas said. “We make sure to kiss and hug each other, especially at bedtime.”

In addition to both spouses having good senses of humor, for the Irsiks, the secret is “lots of pleases and thank yous,” said Gene.

“You also need to tell your spouse how you feel about them, tell them you love them at least once a day, never go to bed angry and avoid all arguments, if possible. Some arguments are impossible to avoid, but most of them aren’t,” he said.

Never going to bed angry, Sharon said, is something the couple is pretty successful at.

“Sometimes it is really quiet at bedtime,” she said with a smile.

“Especially when we both take our hearing aids out,” joked Gene.

With kidding aside, Sharon said she feels her marriage’s longevity is based on several things, including remembering all the things, like family, there are to be thankful for.

“There is commitment to going on and keeping on,” she said. “... You need to be content with what you have; your family, your children and extended family.”

Being committed to someone for a lifetime, the couples said, takes hard work and dedication.

Getting through hard times, Joyce said, takes planning where possible.

“Practically, planning things helps so that you are always ahead. Planning helps for when the bad things come, like financially. Planning your future so when you get as old as we are, you don’t have to worry about where you are going to be,” said the wife of the Kinney duo.“We are always talking things over,” Lilas said. “We buy things together. No one sneaks off to buy something. Decisions are made together. It’s been a successful plan as money is one of the things couples fight about most. Don’t buy something just to buy it. Think about if it’s really needed.”

Ken said he remembers the advice from his agriculture teacher in high school.Sharon said as a spouse, you need to be empathetic and sympathetic.

“You need to try and see it from the other person’s point of view,” she said.

In the end, Joyce said the most important thing for any couple to have is love for each other.

“I always think about this Bible verse that says there is faith, hope and love. You have all these things, and the greatest of things is what? Love.Have love for each other and all those other things work out together,” she said.

Wedding/engagement: simple, the two sat in his car at Radio Springs Park  in Nevada, Missouri and he proposed