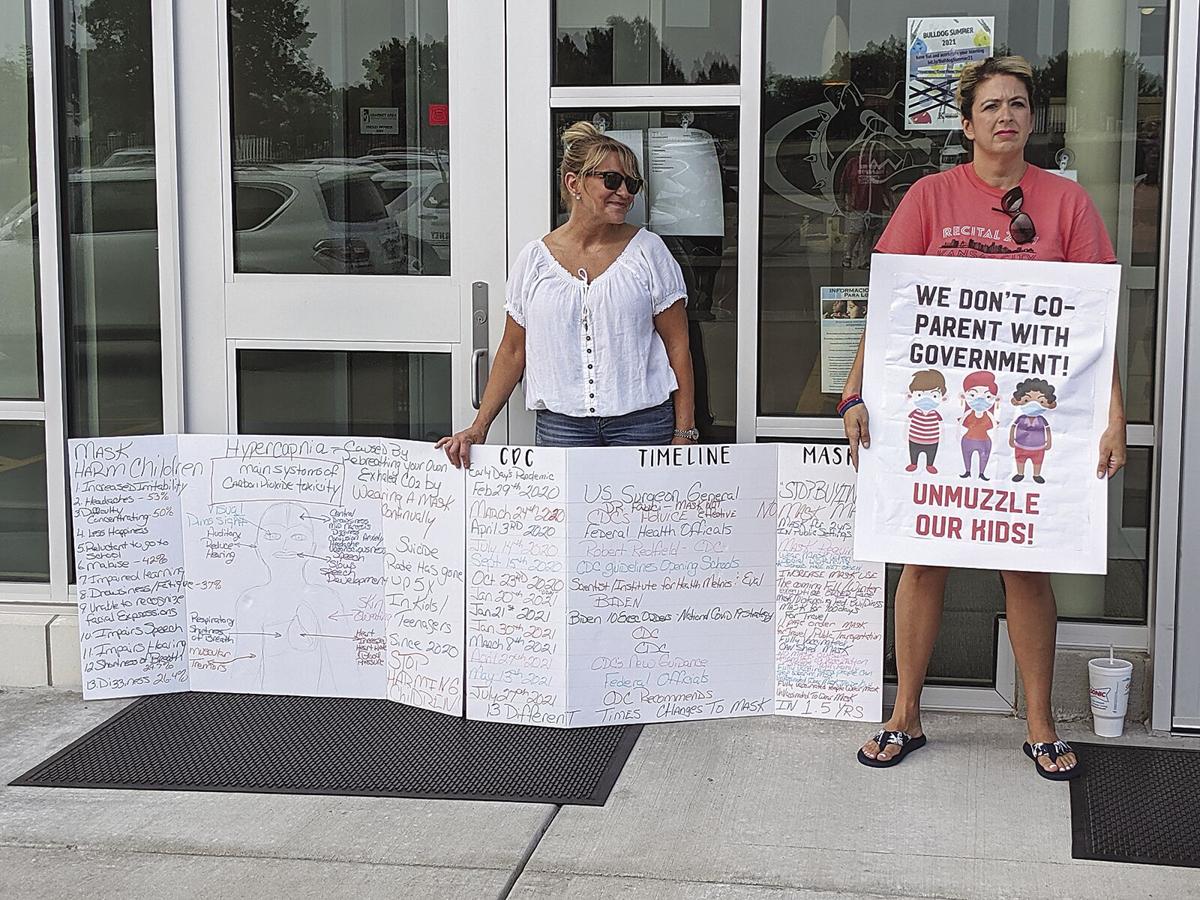 Ahead of the Kearney school board meeting Tuesday, Aug. 10, a handful of protesters stand outside the district administration building. The protesters oppose universal mask requirements in schools. 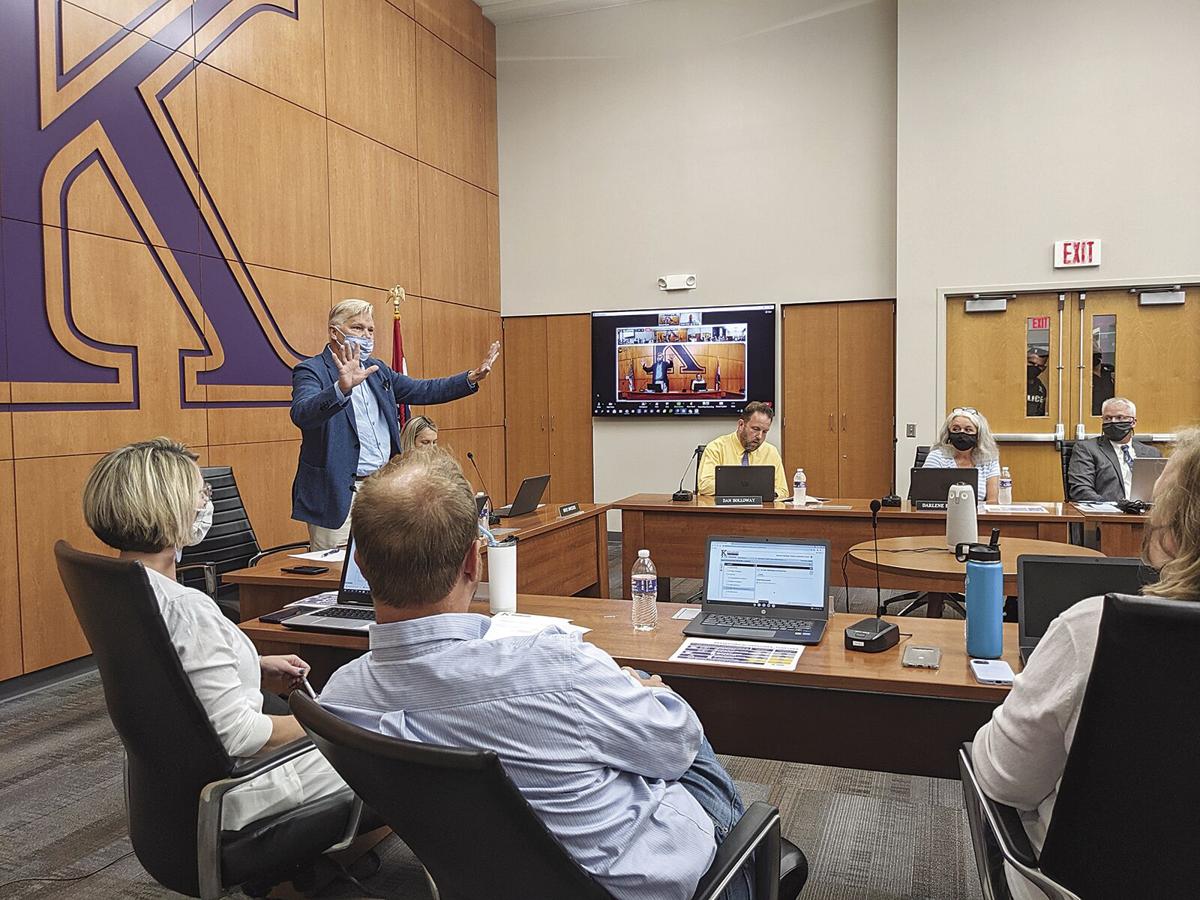 After multiple outbursts from the passionate crowd, Kearney School Board President Mark Kelly threatens to clear the room if board discussion on requiring masks in schools continued to be interrupted Tuesday, Aug. 10. 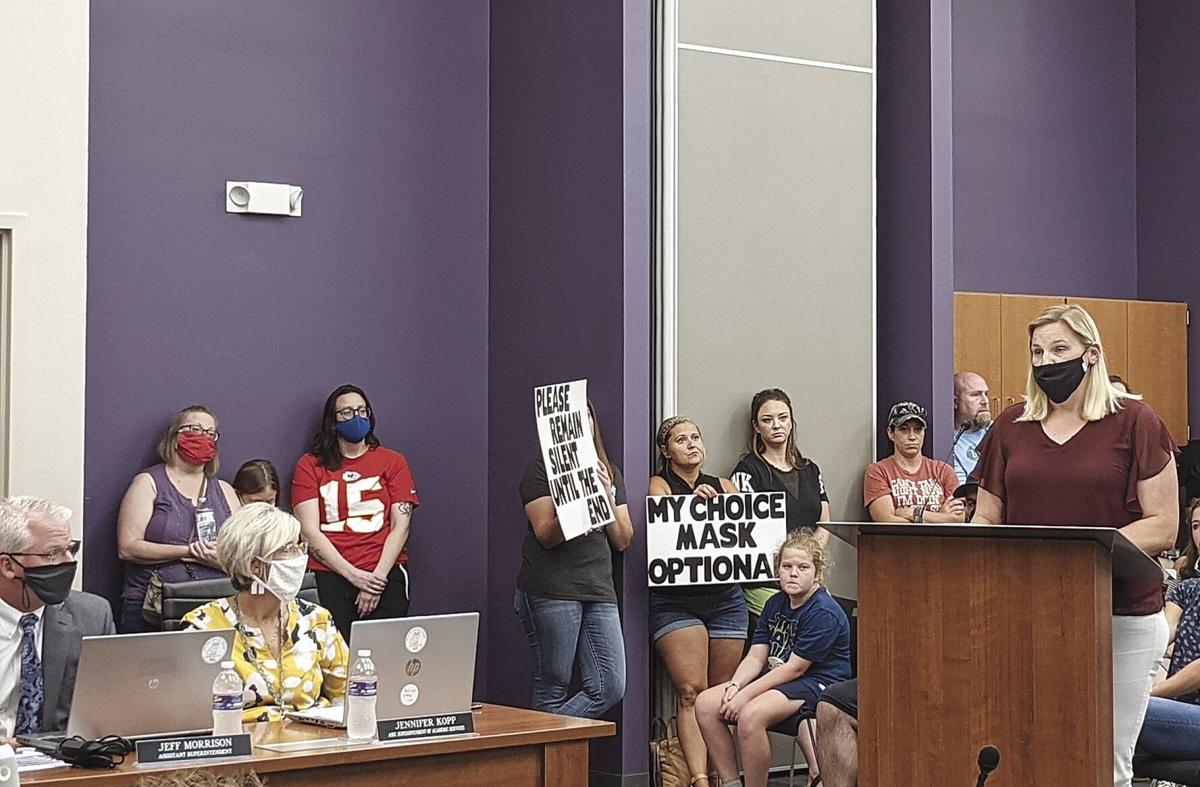 Three of the five speakers at Tuesday’s meeting were against mask mandates in schools. First to speak however, was Sarah Parrish, a mental health professional in favor of mask wearing. Parrish said scientific evidence clearly shows effectiveness of masks in helping slow the spread of COVID-19, and that the board has an obligation to put overall public health above personal choice. 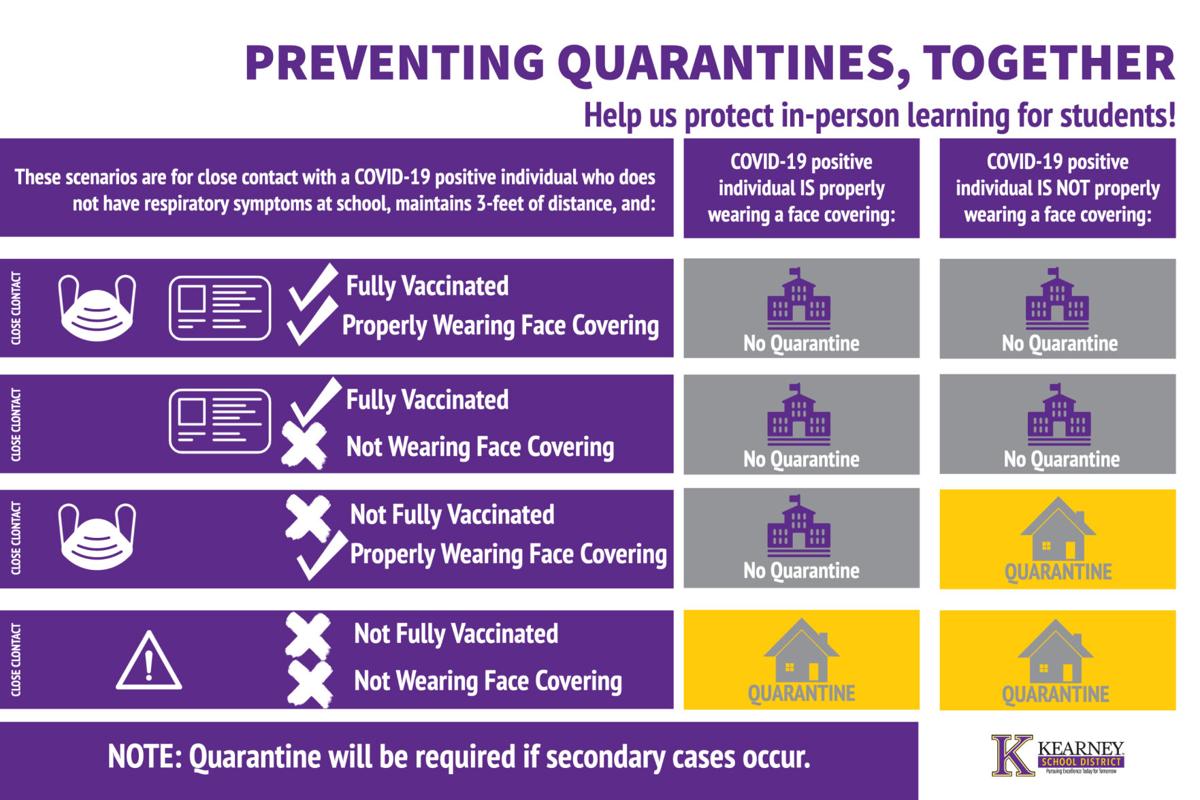 Ahead of the Kearney school board meeting Tuesday, Aug. 10, a handful of protesters stand outside the district administration building. The protesters oppose universal mask requirements in schools.

After multiple outbursts from the passionate crowd, Kearney School Board President Mark Kelly threatens to clear the room if board discussion on requiring masks in schools continued to be interrupted Tuesday, Aug. 10.

Three of the five speakers at Tuesday’s meeting were against mask mandates in schools. First to speak however, was Sarah Parrish, a mental health professional in favor of mask wearing. Parrish said scientific evidence clearly shows effectiveness of masks in helping slow the spread of COVID-19, and that the board has an obligation to put overall public health above personal choice.

KEARNEY — After more than an hour of emotional public comments, frustrated outbursts and debate among board members, the Kearney School Board meeting ended Tuesday, Aug. 10, with district leaders split on whether to require universal masking among students, staff and visitors this coming school year.

Board split after member Dan Holloway abstains from vote. President Kelly says he believes that means it falls to Superintendent White recommendation to require universal masks. Member John Kern says board needs to check that with district attorney.

After the vote, Kelly said he believed the split decision meant the district must follow Interim Superintendent Todd White’s recommendation to require universal masking. The superintendent, who attended the meeting virtually after contracting COVID-19 despite being fully vaccinated, said mask wearing is a way to reduce possible days lost in school by COVID-19 infections and close contact isolations and quarantining.

White’s recommendation also included guidance on “proper” mask wearing and when quarantine and isolation would be needed. Some in the audience and members of the board were seemingly confused by the explanation. A copy of the recommended guidance is attached to the online version of this article at MyCourierTribune.com.

As board policy is not clear on who breaks a tie vote of the board, Kern said the district’s legal counsel needed to be consulted before a policy was put in place. Kern also asked Holloway if his vote would have been different if White’s recommendation included different information.

“I think we’ve had many conversations and talks where we say, ‘It’s not black, it’s not white, but it’s gray, and that’s where I’m at. I’m at where it’s gray,” Holloway responded.

Some in the audience took issue with Holloway’s lack of a definitive stance as an elected leader. One woman shouted, “Speak up Dan, come on.”

Before the meeting began, tensions ran high as a small group of protesters gathered outside the school district administration building at Missouri Highways 33 and 92. Some in attendance held signs with sayings such as “We don’t co-parent with government. Unmuzzle our kids” and “My choice, mask optional.” Inside the building, it became standing room only as nearly 100 people packed into the board meeting room and hallway with Kearney police on scene to keep the peace.

Three of the five speakers at Tuesday’s meeting were against mask requirements in schools.

First to speak however, was Sarah Parrish, a mental health professional in favor of mask wearing. Parrish said scientific evidence clearly shows effectiveness of masks in helping slow the spread of COVID-19, and that the board has an obligation to put public health above personal choice.

1st of public to speak: Sarah Parrish, asking for mask mandate as mental health expert. Says she believes in individual rights but in light of pandemic and overall public health, masks needed. Says kids don't like MAP tests or putting on shoes either, but do that & masks needed. pic.twitter.com/smVlIPqdFq

“I am absolutely a proponent of an individual’s right to self-determination. However, when an individual becomes a danger to themselves or others, it becomes necessary to limit their right to self-determination,” she said. Parrish added students may not like to wear masks, but they also don’t like to take MAP tests or wear shoes at times, but they are required to and do fine in doing so.

The other mask proponent, Season Kerns, a parent and scientist, said she believes masking is the best option to help prevent COVID-19 spread and related loss of in-school days for students, especially those too young to be vaccinated.

Those speaking against mask mandates were Megan Lewis, Selissa Palmer and Michelle Taylor.

Palmer, a mother of seven, fought back tears as she addressed the board. Palmer said five of her children are enrolled in district schools and three have specific needs requiring district resources.

2nd speaker of 5 to address board against masks, 3rd speaker for masks. 4th speaker, Salisa Parker, mom of 7, against masks and fights tears addressing board. Parker says her children have trouble with masks. Also says board needs parent permission not other way around. pic.twitter.com/8Ougstvb58

“I have a (7-year-old) who has a speech issue, and he also has (obsessive compulsive disorder). Imagine doing that with something on your face. It’s so difficult,” she said. “Over the last year of school, his speech has gotten so much worse because he can’t see how other people use their mouth, position their tongue.”

Palmer said she has another son who has a lisp and his speech has also gotten worse because of “mask mouth.”

“I have a son who now has braces. If he is to wear a mask that, as you suggest, that fits his face and is tight against there to avoid getting some type of virus — that will go through the mask, it will cause his braces to not fix his mouth and we are out $6,000,” she continued.

Palmer also said the issue whether to require masks in schools or not is more than “mask against mask and vaccine against vaccine.”

Taylor said she submitted a petition to the school district about the possible mask requirement and a majority of people in the room signed it, requesting parents be given a choice.

“That’s all we are asking for, is a choice,” she said, adding she has one child who is fine with wearing a mask and another who suffers from issues that make it detrimental to her wearing one.

Taylor also said her children have been “bullied” by district athletic staff who told them they would not be able to play sports if they did not wear a mask.

“That’s before this decision has even been made. So you are bullying children, or someone is bullying our children, and trying to talk to the parents so they just give up this fight,” she said. “This fight is for a choice.”

School District Communications Director Ray Weikal said the district has no evidence any staff member has “bullied” a student, adding that district staff have likely reminded families that masks on school buses is required by federal mandate and outside local control.

The Kearney School Board will discuss the tie-breaking authority of the superintendent with its lawyer and will bring the issue back up at its next board meeting, scheduled for 7 p.m. Wednesday, Aug. 18.

To learn more and inquire how to sign up to be part of public comment, email at boe@ksdr1.net. In addition to speaking at a board meeting, written correspondence may be directed to the board through the superintendent. Statements of 2 pages or less are encouraged. Comments can be emailed to boe@ksdr1.net or mailed to 150 W. Missouri Highway 92, Kearney, MO 64060.