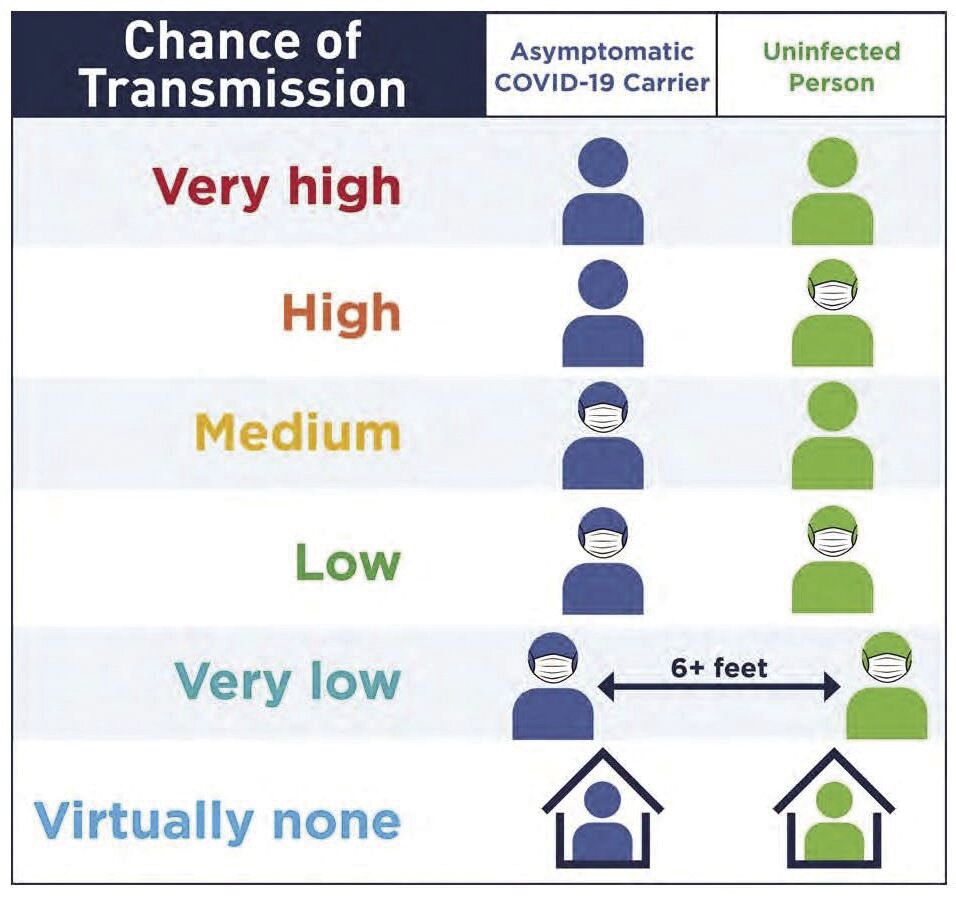 This graphic illustrates the decreasing likelihood in COVID-19 transmissions, according to local health experts, when face coverings and other preventative measures are used.

This graphic illustrates the decreasing likelihood in COVID-19 transmissions, according to local health experts, when face coverings and other preventative measures are used.

CLAY COUNTY — According to officials with Clay County Public Health Center, after weeks of increased positive cases and dozens of deaths, multiple outbreaks of coronavirus at area nursing homes are leveling off.

As of Monday, July 20, CCPHC Communications Specialist Kelsey Neth said outbreaks at nursing homes had accounted for a majority of the health center’s reporting jurisdictions cases and deaths with:

• 19 cases and no deaths at Heritage Avonlea of Gladstone,

• eight cases and zero deaths at Liberty Health and Wellness and

• 58 cases and seven deaths at Ashton Court Care and Rehabilitation Centre in Liberty.

“Last week, we reported about 77 new cases and 72 were not related to any sort of outbreak like that,” she said July 20. “It’s a big decrease from previous weeks because they had been over 50% of our cases. We’ve seen a steady decrease there over the past four weeks.”

Since July 20, Neth said cases at congregated living facilities continue to stay stagnant, for the most part, despite increases in cases elsewhere in the health center’s reporting jurisdiction, which covers all of Clay County except the portion of Kansas City in county limits. Kansas City cases are reported by the Kansas City Health Department.

As of Monday, July 27, Neth said she believes no new cases reported by the health center in the past week have been associated with outbreaks at nursing homes.

Despite the drop in nursing home cases, Clay County, like the rest of the country, continues to see a spike in overall community spread. As of 4:30 p.m. Tuesday, July 28, case totals for Clay County stood at 1,379 positive cases to date with 28 deaths. Of those, 659 cases and six deaths are in Kansas City residents and reported by the Kansas City Health Department.

The county reporting jurisdiction saw its biggest spike in cases, according to the health center’s COVID-19 resource hub available through the health center site at clayhealth.com, in the past month. Between June 25 and July 27, cases have more than doubled from 338 on June 23 to 711 as of Monday.

As with other reports from across the nation, CCPHC is also now reporting its biggest jump in cases among younger populations. According to the health center’s data hub, those 65 and older with the virus now account for roughly 24% of positive cases. Currently, the most infected age range are those between 45 to 64, at 31%, followed by those aged 25 to 44 at 29%.

“While we are seeing about 60% of our hospitalized cases in those 65 and older, those do not account for all of our cases. We are seeing more of them in those that are younger,” said Neth. “… Young people are not immune to it, for sure. Everyone, as always, needs to be taking this seriously and do what they can to protect themselves and others,” she said.

In a graphic shared by the health center on social media last week, the center reported its biggest age range spike between June and so far in July in those ages 20 to 29, with the case count more than doubling from roughly 20 cases to nearly 50 in that age bracket.

“This month, we have seen an increase in the number of young people testing positive for COVID-19. There has also been an increase among this population in hospitalizations although there have been no deaths of anyone under 45 years of age in the county,” states a Facebook post from the health center dated July 24. “It remains extremely important that all people over the age of 2 wear a mask in public and use other essential strategies to reduce the spread of germs.”

Earlier this month the health center mandated face coverings be worn in public in response to the highest spike in cases reported since the pandemic begin this winter. According to health center data, while stay-home orders were in place in March, it took roughly 50 days for the reporting jurisdiction to reach 100 positive cases. Since then, the next 100 cases were reported in less than half that time in 24 days. Cases rose from 200 to 300 in another 12 days, to 400 cases in another 12 days and to 500 cases in 10 subsequent days.

While differing kinds of masks offer varying amounts of protection from the spread of germs and viruses, health experts at the Mayo Clinic report even cloth face coverings are better than no mask to help prevent the spread of COVID-19.

“A cloth mask is intended to trap droplets that are released when the wearer talks, coughs or sneezes. Asking everyone to wear cloth masks can help reduce the spread of the virus by people who have COVID-19 but don’t realize it,” states mayoclinic.org. “Cloth face coverings are most likely to reduce the spread of the COVID-19 virus when they are widely used by people in public settings.”

The Centers for Disease Control and Prevention site states wearing a face covering is a form of source control.

“This recommendation is based on what we know about the role respiratory droplets play in the spread of the virus that causes COVID-19, paired with emerging evidence from clinical and laboratory studies that shows cloth face coverings reduce the spray of droplets when worn over the nose and mouth.”