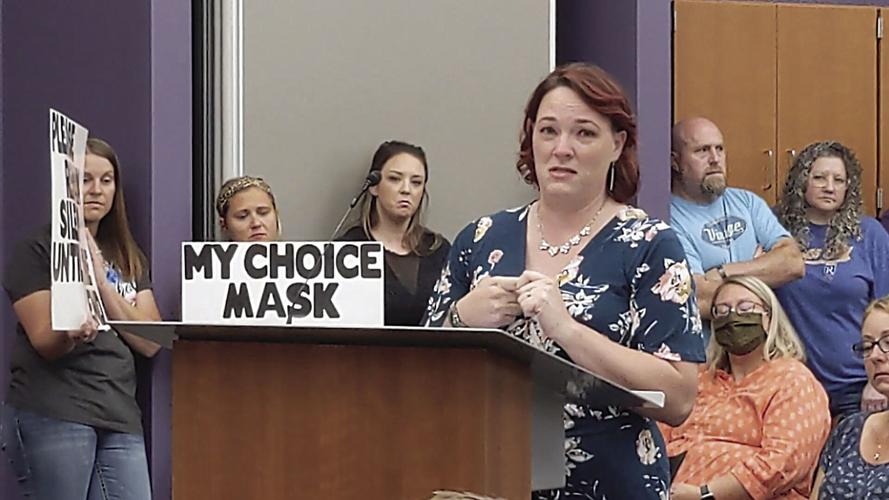 Parents, like those in Northland Parent Association, in favor of masking choice in schools have been attending school board and other public meetings in droves this school year. Seen here is Kearney mother Selissa Palmer, who addressed the Kearney school board this summer, saying her children have suffered as a result of wearing masks. 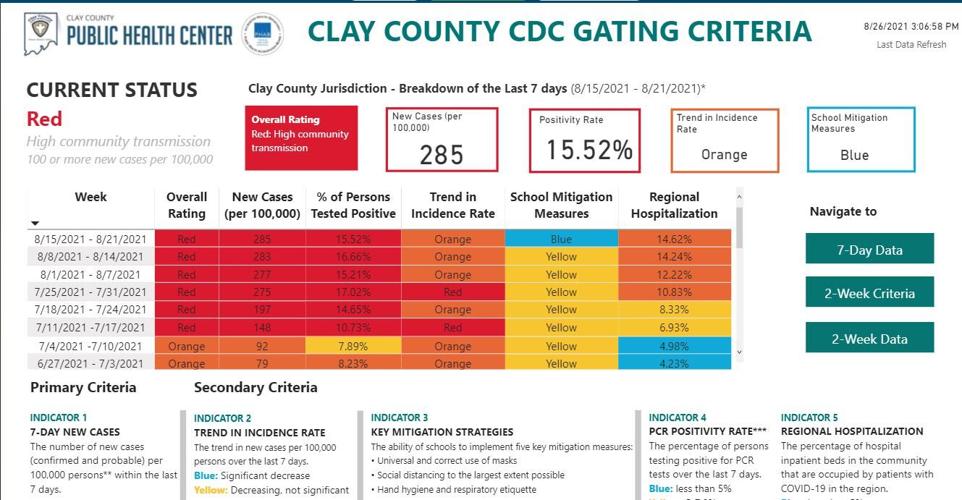 Parents, like those in Northland Parent Association, in favor of masking choice in schools have been attending school board and other public meetings in droves this school year. Seen here is Kearney mother Selissa Palmer, who addressed the Kearney school board this summer, saying her children have suffered as a result of wearing masks.

CLAY COUNTY — This week, the Northland Parent Association, a grassroots organization of Clay and Platte county families, filed suit against local school districts and leadership of Kansas City and North Kansas City over mask mandates. The group is challenging the constitutionality of these mandates, arguing it should be a family’s choice in determining to whether to wear masks.

What the parent group is saying

“Schools have failed to consider that mask mandates disproportionately impact younger students, English-learner students and students with special needs,” said Jay Richmond, president of the Northland Parent Association. “COVID-19 transmission rates among children are low, and we must stand up and protect our children against government overreach and keep parents at the center of their children’s care.”

The goal of the lawsuit and organization includes providing parents a platform for educating themselves on how to make sure school boards and other leaders are making educated decisions and listening to input from families. The group leader said members have been trying to go through proper channels like public comment periods at school, city and health board meetings, but those comments are falling on indifferent ears of leaders who may have their own agenda.

“We are trying to do our part to fight for parents in the Northland. We want to give parents a platform to educate themselves and … hopefully, not make this as polarizing as this has been,” he told the Courier-Tribune Tuesday, Aug. 31.

The Northland Parent Association is represented by Kansas City attorney Kevin Corlew. Corlew is a former state House representative who resigned his seat.

The 74-page case he filed on behalf of the parent group argues mask mandates for students are “arbitrary and unlawful and fail to allow exemptions for medical and religious reasons,” states a release from the parent group. “The case does not call for a complete prohibition of masks, but argues that parents and students are allowed a choice.”

Members of the Northland parents group also argue elected leaders seem only to listen to part of the medical community. Richmond said for each medical expert using data to advocate for masks, there are as many medical professionals on the other side of the coin.

“If you have a mask and are wearing it, you’re safe. But, it should be everyone’s choice (to wear one or not),” he said.

Richmond added masking and other protocols like barriers around desks and social distancing have had detrimental effects on many children, his included. Richmond has three children, two still in NKC Schools and one he has pulled from the district and placed in private school.

One of his children, who Richmond describes as typically “extremely social,” has completely changed due to pandemic school protocols, he said.

“My vibrant and social kid completely shut down,” he said. “I hear story after story like this from other parents.”

On Tuesday, Dallas Ackerman, Liberty Public School’s communications director, told the Courier-Tribune without mask requirements, “we would already have a significantly higher number of students and staff quarantined … as we follow COVID-19 policies and procedures set forth by federal and local health officials.”

“The priority for LPS has been to provide five days per week of in-person learning opportunities for all students choosing this mode of learning in a healthy and safe environment. Following the first week of school, it is evident that COVID-19 remains in our community as we have seen positive cases within our schools,” said Ackerman. “We appreciate the efforts of our entire team to make these learning opportunities possible for our students.”

In a statement to local media, North Kansas City Schools said it would not comment on litigation, but it was committed to doing what is recommended to keep teachers, students, staff and the community safe.

“Along with many other school districts across Missouri and the United States, decisions are being made based on what is needed in the community at that given time. North Kansas City Schools’ decisions are made in direct response to guidance and recommendations from local, state and national health experts. We will continue this practice with the goal of keeping students in-person to the greatest degree possible.”

Smithville School Board President Denney Fales said he is aware of the lawsuit, but will not comment specifically on it.

“The plan is to follow the legal process,” he said. “I really didn’t expect the suit to be at the federal level. I just found out on Monday. It will be handled by the lawyers.”

Fales did say that since the August board meeting and the start of school, there have not been many calls or complaints about the district’s universal mask requirement, but that community opinion on them seems evenly split.

“I believe the board hopes that there can be some calm and that kids and teachers can be in school, doing what they do best,” he said. “We have received supportive emails as well as the negative. It’s pretty evenly split.”

On Monday, Aug. 30, Kansas City Mayor Quinton Lucas responded to the suit in a released statement, saying his objective when it comes to Kansas City’s COVID-19 response is to save lives.

“No lawsuit will change that,” he wrote. “Still, I’m saddened to see yet another lawsuit filed today over masking without merit under Missouri law — just like the suits filed against us before, including the Missouri Attorney General’s own politically-motivated stunt. The city has crafted each set of COVID-19 guidelines based on clear, data-driven advice from health and scientific leaders from the White House and CDC down to our health department. Our City Council — including three of the four members from Kansas City’s Northland — have codified this indoor mask mandate in places of public accommodation for this reason: masking works to slow the spread of COVID-19.”

The parent lawsuit comes after the U.S. Centers for Disease Control and Prevention and Clay County Public Health officials recommended universal mask-wearing in schools regardless of vaccination status due to the increasing spread of COVID-19, likely in relation to the rise in the Delta variant. School districts across the Northland like Kearney, Liberty, North Kansas City and Smithville have implemented universal mask requirements.

Many Kansas City doctors, including pediatricians from local hospitals who commented at Clay County Public Health meetings, encourage masking policies in schools, saying area hospitals are seeing an increase in patient populations due to COVID-19.

Throughout Clay County as of Tuesday, the public health center was reporting nine active COVID-19 outbreaks.

According to school case reporting by Clay County Public Health using CDC gating criteria, between Aug. 15 and 21, Clay County had a high rate of community transmission based on CDC guidelines with 285 new cases reported per 100,000. This equates to a positivity rate of 15.52%.

Kearney’s online dashboard reports as of Aug. 26, 20 of 3,622 students are actively isolated for COVID positivity and 26 others are quarantined for close contact. Currently, there are also three Kearney staffers isolated and one quarantined of the 515 total staffers in the district. The largest number of isolations in one school population, 10, comes from Kearney High School.

Based on data on the county health recovery dashboard, accessible through the county health department’s website clayhealth.com, 43% of county residents age 12 and older are fully vaccinated, which local health experts have attributed to slowing the overall spread and death rate of COVID-19 since the start of the pandemic.

“Cases are starting to stabilize at about 350 cases per week. The rapid growth in cases seen in July has not been observed for the last month,” states the county recovery dashboard.

More details on this developing story will be published as they become available. For updates on all COVID-19 regional news and resources, visit mycouriertribune.com/coronaviruscoverage.

What is the Northland Parent Association?

The association was established, President Jay Richmond said, in the last six months, when Northland parents who wanted a choice on masking and other COVID-19 safety protocols increasing felt discouraged and unheard by elected leaders. In the last month, the organization filed as an official nonprofit, although it is not a 501(c)3, with the state. Richmond said membership has grown rapidly and now stands at more than 300.

Judge strikes down Northland parents lawsuit over masks in school

© 2016 NEWS-PRESS & GAZETTE COMPANY
Powered by BLOX Content Management System from TownNews.com.
Our new eEdition is too good to keep to ourselves.