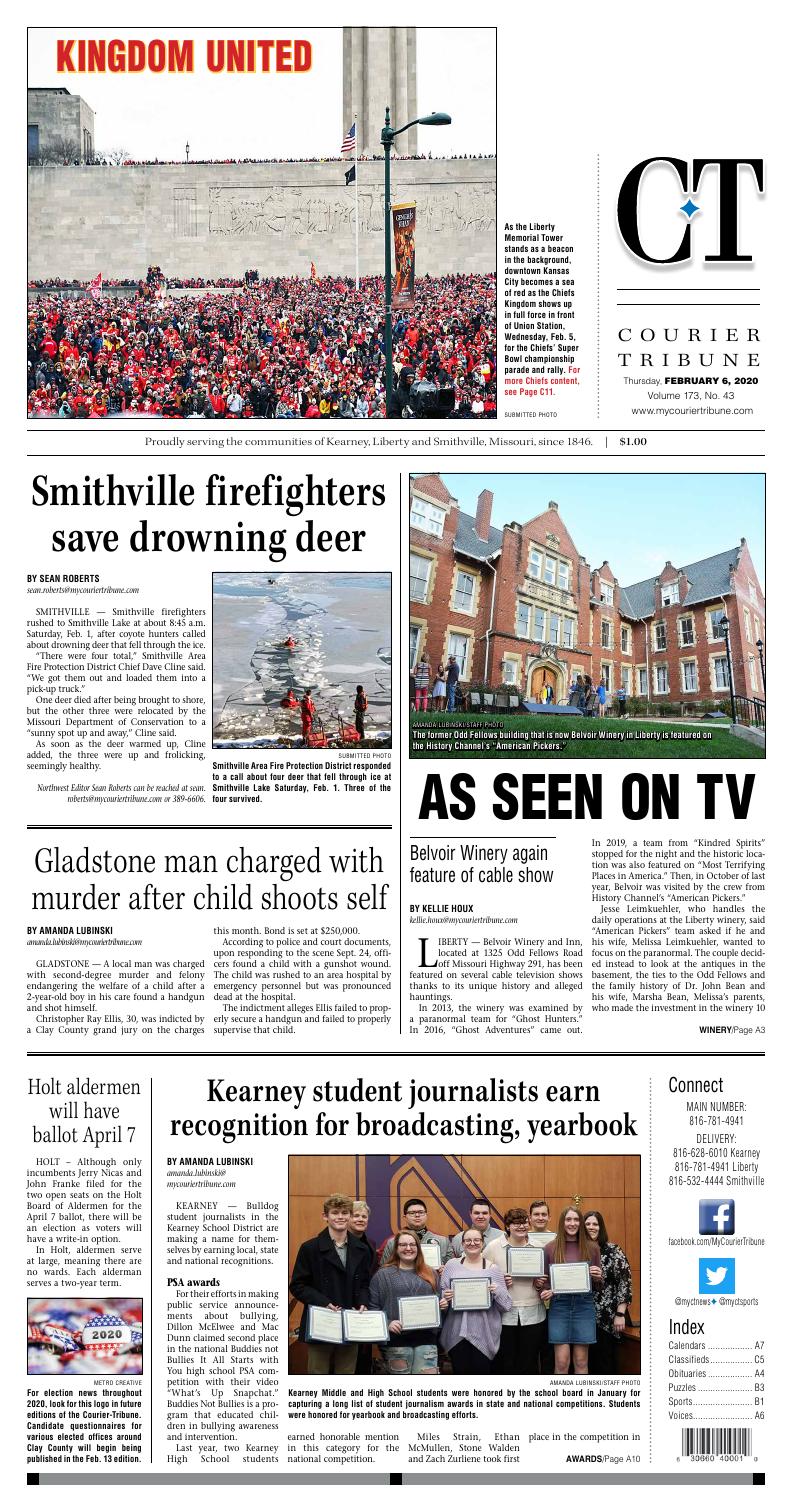 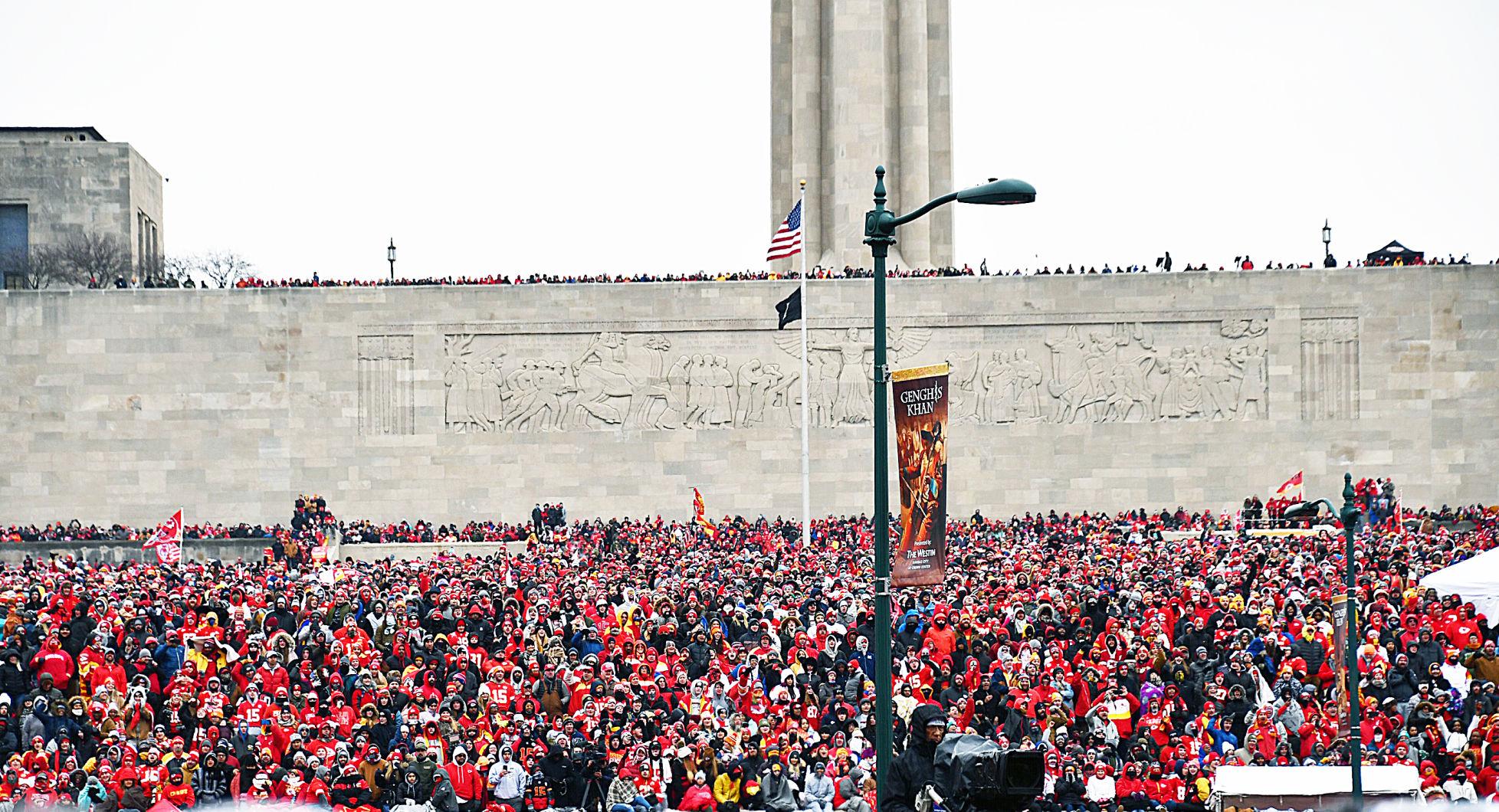 Smithville Area Fire Protection District responded to a call about four deer that fell through ice at Smithville Lake Saturday, Feb. 1. Three of the four survived.

Smithville Area Fire Protection District responded to a call Saturday, Feb. 1, about four deer that were drowning in Smithville. All were rescued but only three survived.

SMITHVILLE — Smithville firefighters rushed to Smithville Lake at about 8:45 a.m. Saturday, Feb. 1, after coyote hunters called about drowning deer that fell through the ice.

“There were four total,” Smithville Area Fire Protection District Chief Dave Cline said. “We got them out and loaded them into a pick-up truck.”

One deer died after being brought to shore, but the other three were relocated by the Missouri Department of Conservation to a “sunny spot up and away,” Cline said.

As soon as the deer warmed up, Cline added, the three were up and frolicking, seemingly healthy. 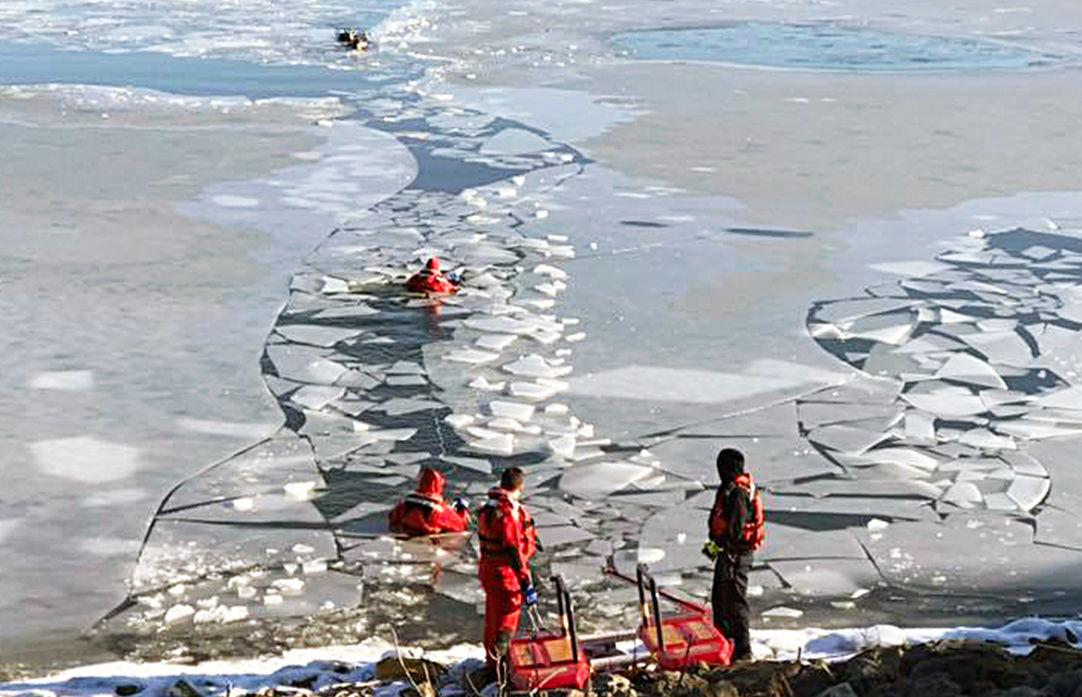 Smithville Area Fire Protection District responded to a call about four deer that fell through ice at Smithville Lake Saturday, Feb. 1. Three of the four survived.

GLADSTONE — A local man was charged with second-degree murder and felony endangering the welfare of a child after a 2-year-old boy in his care found a handgun and shot himself.

Christopher Ray Ellis, 30, was indicted by a Clay County grand jury on the charges this month. Bond is set at $250,000.

According to police and court documents, upon responding to the scene Sept. 24, officers found a child with a gunshot wound. The child was rushed to an area hospital by emergency personnel but was pronounced dead at the hospital.

According to court documents, during his arraignment in Clay County Circuit Court Friday, Jan. 31, Ellis pleaded not guilty.

As of Friday, Ellis remains in Clay County Detention Center in Liberty in lieu of bond.

KEARNEY — Bulldog student journalists in the Kearney School District are making a name for themselves by earning local, state and national recognitions.

For their efforts in making public service announcements about bullying, Dillon McElwee and Mac Dunn claimed second place in the national Buddies not Bullies It All Starts with You high school PSA competition with their video “What’s Up Snapchat.” Buddies Not Bullies is a program that educated children in bullying awareness and intervention.

Miles Strain, Ethan McMullen, Stone Walden and Zach Zurliene took first place in the competition in the middle school category for their video “Please Step In.”

The student videos can be viewed online via the Buddies Not Bullies site at www.buddiesnotbullies.org/psa.

MIPA hosts for challenges for students throughout the year. Each includes a theme and provides students about two weeks to complete the challenge, covering a topic for their school in a way that fits the theme, said Kearney High School Journalism teacher Karen Johnson.

“Macy actually created a full feature package about Seth Cooper and we aired it on KHS-TV as well as during halftime of one of our (Bulldog Broadcasting Network) on ESPN3 football games in the fall. She then took the initiative to take some of that footage and create a PSA based off the theme ‘You Don’t Have to Be Great to Start, But You Have to Start to Be Great’ when MIPA issued this challenge. She earned first place,” the teacher said. Seth Cooper is a high school student who plays for Midwest Adaptive Sports on its Kansas City Kings wheelchair basketball team.

In addition to winning the PSA competition, Higgins was the only high school student hired by the Kansas City Royals for their Game Crew staff.

“Higgins says she believes the experience she has received in classes such as broadcasting and sports entertainment arts have helped lead her to this opportunity,” states a district release.

The Royals Game Crew is responsible for executing pre-game ceremonies such as the first pitch and National Anthem as well as setting up, managing and executing in-game contests and features shown on CrownVision. As a crew member, Higgins will get to learn about live, game day production and worked FanFest.

“Cierra is Kearney News Network. She coordinates posting stories, videos and photos on our KNN site. She and Macy decided to team up for the new MIPA strategic communication challenge. They selected to cover the theme of ‘Elevating School Spirit’ and then had to choose three or four of the medium options to create as a package communicating this theme. Cierra wrote the story and created the social media graphic and Macy created the video,” said Johnson.

Regular photography contest entrant Tyler Pedee was noted in October and December of 2019 by MIPA for honorable mention in the organization’s monthly Photo of the Month competition. For the competition, students submit a photograph with caption that are judged against other entries from across the state.

“These students, along with almost 5,000 middle and high school journalism students from across the country, attended breakout sessions and competed. They also submitted their overall broadcast and yearbook in the Best of Show competition. KHS had two individual winners as well as a Best of Show award,” said Johnson. “For the first time, KHS-TV brought home a seventh place Best of Show in the Broadcast Program category, which includes schools of all sizes.”

Reece Greenwood and Higgins also earned individual awards from the Journalism in Education Association contest for capturing honorable mention in the yearbook copy and sports caption category and excellent in the broadcast sports story category.

“In the individual competitions, students earn a rank of Superior, Excellent, Honorable Mention or no award. Reece competed in one of the write-off competitions, where he had two hours to take information provided to him for a story and captions and then decide the best way to take that information, write the story, headlines and captions for a sports spread,” said Johnson.

“The Crown Award indicates the publication they produced ranks among the best in student journalism,” states a release from CSPA. As a Crown Award winner, the staff will be presented with either a Gold or Silver Crown Award in March 2020 at the CSPA national convention in New York City.

“Earlier in the year, the 2019 Clipper yearbook earned the Walsworth Gallery of Excellence recognition for the third year in a row. Then, based on the staff’s selection as a Crown Award winner, the Clipper Yearbook also earned a spot in the Walsworth President’s Collection, which includes those books that earn a NSPA Pacemaker or CSPA Crown Award, the two highest national honors for high school yearbooks,” wrote Johnson in a description of the honors.

The yearbook also earned a MIPA All-Missouri award, which will be presented to the staff in March 2020. The book also earned a First Class with One Mark of Distinction in Coverage from the National Scholastic Press Association and a Gold Medalist rating and All-Columbian Honors in Verbal and Visual from CSPA.

“Not to brag just for me, but for these kids, these are some amazing awards,” said Johnson. “... I’m really thrilled for those guys. They spent hundreds of hours in and outside school, attending events, performances, sporting events and photographing them, writing about them and recording them for history in that book. They went above and beyond and I just want to tell them thank you for that.”

Johnson said her students not only do good work for their own publication and broadcasting efforts, but step up when professional media sources interview or tap them for their work like on ESPN, in the Courier-Tribune and on KCTV5.

“They do an amazing job,” she said with a quivering voice after getting emotional about her students’ accomplishments. “I am proud of the way they represent Kearney everywhere we go.” 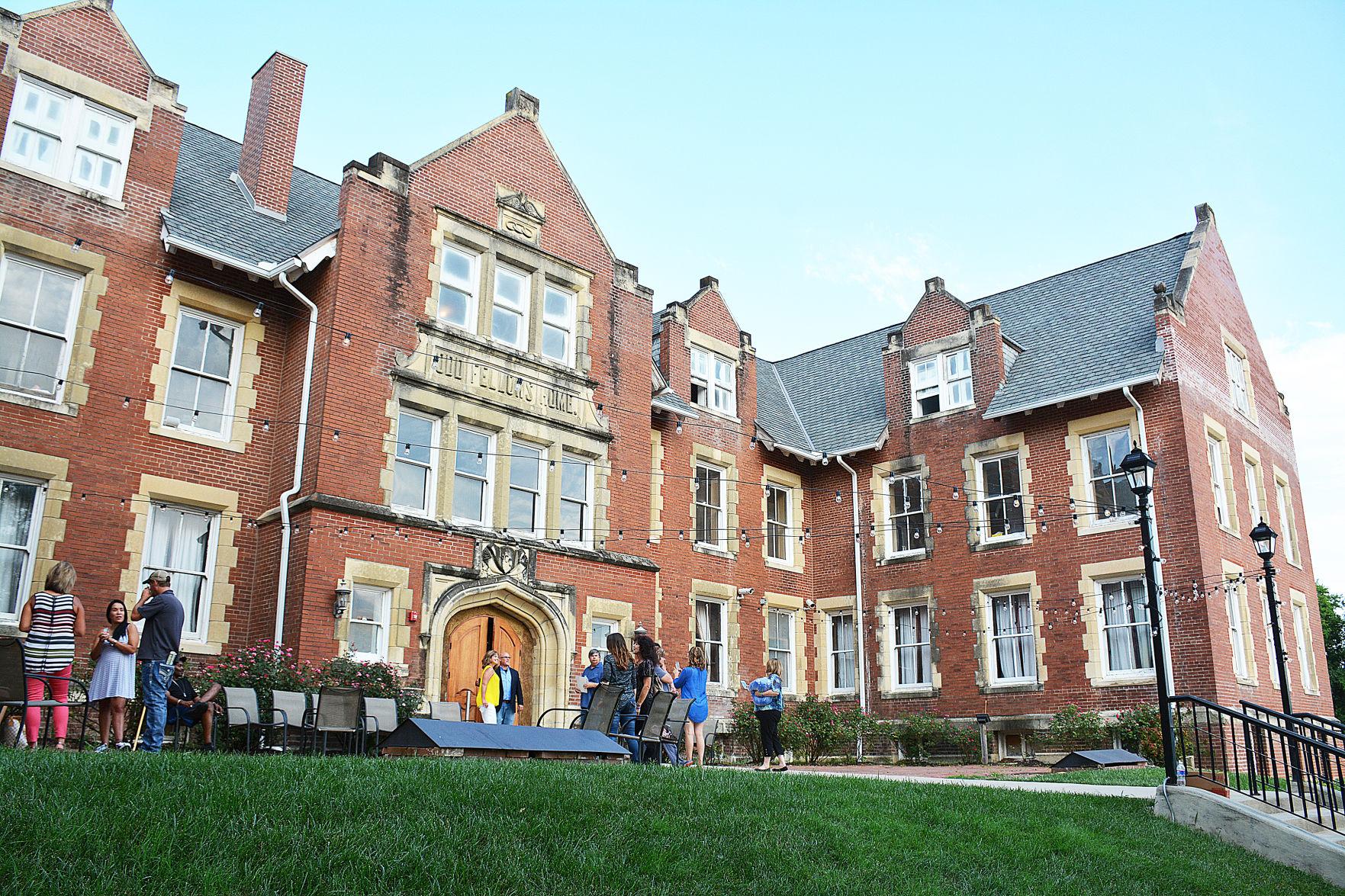 The former Odd Fellows building that is now Belvoir Winery in Liberty is featured on the History Channel’s “American Pickers.”

The former Odd Fellows building that is now Belvoir Winery  in Liberty is featured on the History Channel's "American Pickers."

LIBERTY — Belvoir Winery and Inn, located at 1325 Odd Fellows Road off Missouri Highway 291, has been featured on several cable television shows thanks to its unique history and alleged hauntings.

In 2013, the winery was examined by a paranormal team for “Ghost Hunters.” In 2016, “Ghost Adventures” came out. In 2019, a team from “Kindred Spirits” stopped for the night and the historic location was also featured on “Most Terrifying Places in America.” Then, in October of last year, Belvoir was visited by the crew from History Channel’s “American Pickers.”

Jesse Leimkuehler, who handles the daily operations at the Liberty winery, said “American Pickers” team asked if he and his wife, Melissa Leimkuehler, wanted to focus on the paranormal. The couple decided instead to look at the antiques in the basement, the ties to the Odd Fellows and the family history of Dr. John Bean and his wife, Marsha Bean, Melissa’s parents, who made the investment in the winery 10 years ago.

Jesse is friends with Danielle Colby, one of the “American Pickers” cast members.

“She wanted to do a pick here,” he said, “so we went through the basement of this main building.”

Colby brought fellow castmate Robbie Wolfe to look for various items for possible resale. The series cast looks at people’s homes, barns, sheds, outbuildings and other places where they have stored antiques and collectibles. They call upon casual collectors and those who have inherited overwhelming collections to sell them their treasurers.

“With the show, the cast usually visits two locations so we were in about 20 minutes of a show,” Jesse said. “It’s amazing they edited the footage down because I believe they did about 13 hours of shooting here. Going through the basement was a bit of a discovery too for us. We had shoved some things into the basement and forgotten some. They found some stools and tables. It was fun to go through it all again.”

The winery owner said there were a “ton of pictures” to go through as well.

“Melissa said some of her dad’s patients got to see themselves on TV,” he said. “Those were good memories to share.”

Bean practiced family medicine and was part of Liberty Hospital’s growth, including serving for two years as the chief of staff.

“When we get featured on a television show, it’s still a wonderful validation,” Jesse said. “It has some impact to the community too as we show off Liberty. It’s also fun to share the work we have done in renovating this place.”

However, it was a bit odd that the location was given as northern Missouri, he said.

Jesse points to a picture in the hallway of orphans who once lived in the building, standing in front taking that picture.

“And 100 years later, people stand in front of the building and are still taking pictures,” he said. “While many things have changed, many have not.”

The building has been a school, senior citizen home and orphanage during its history. The local Jaycees also used it for a haunted house.

“Going through the stuff in the basement allowed us to relive the history behind the objects. It’s just cool,” Jesse said.

After the most recent TV show episode aired, inquiries started coming from as far as Oregon.

“‘American Pickers’ has a significant audience of about 4.5 million,” Jesse said.

A repeat airing of the Belvoir Winery episode of "American Pickers" will aired at 7 p.m. Monday, Feb. 3, on the History Channel. Check your local listings for the channel number.

For election news throughout 2020, look for this logo in future editions of the Courier-Tribune. Candidate questionnaires for various elected offices around Clay County will begin being published in the Feb. 13 edition.

HOLT – Although only incumbents Jerry Nicas and John Franke filed for the two open seats on the Holt Board of Aldermen for the April 7 ballot, there will be an election as voters will have a write-in option.

In Holt, aldermen serve at large, meaning there are no wards. Each alderman serves a two-year term. 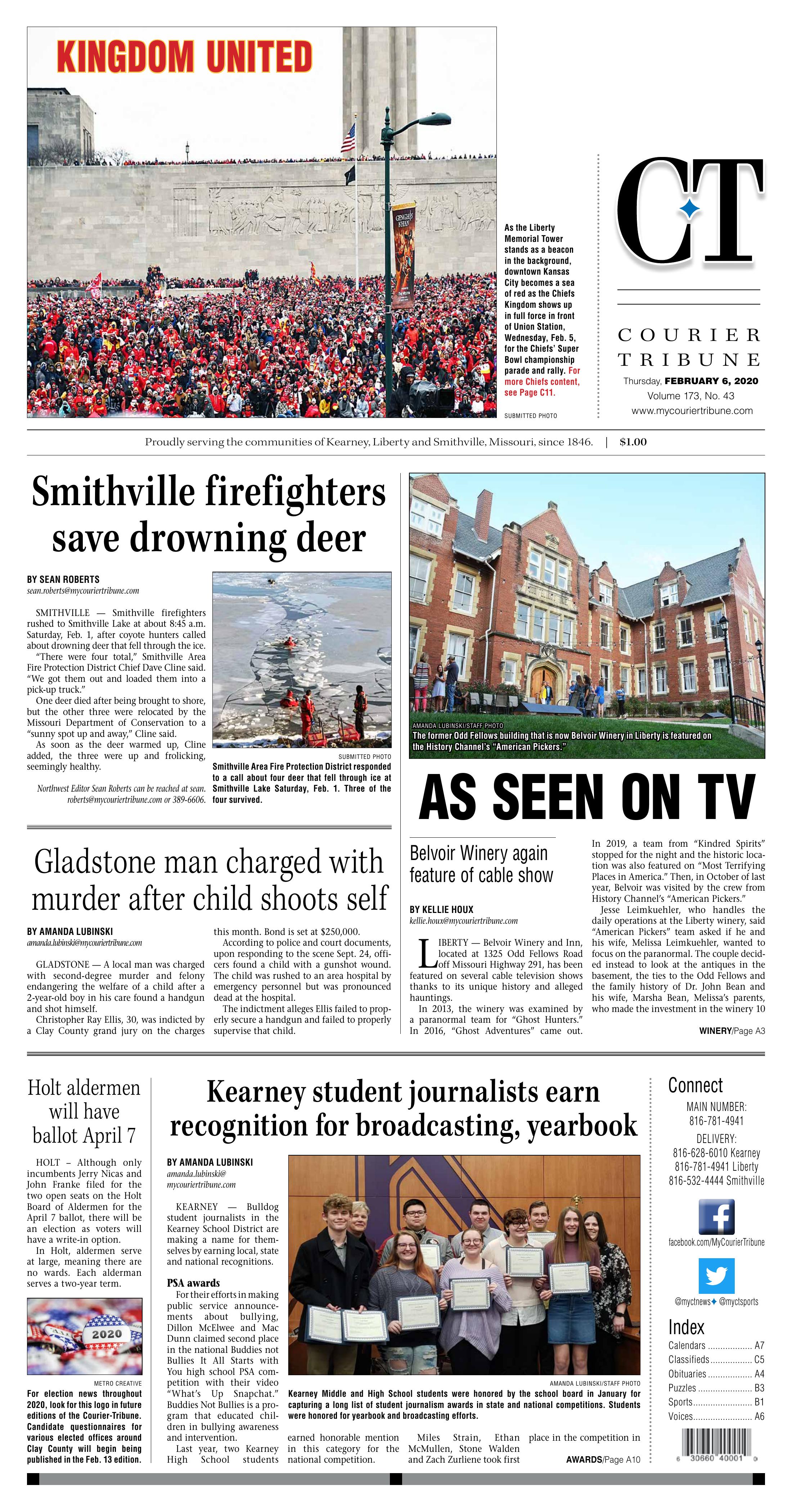