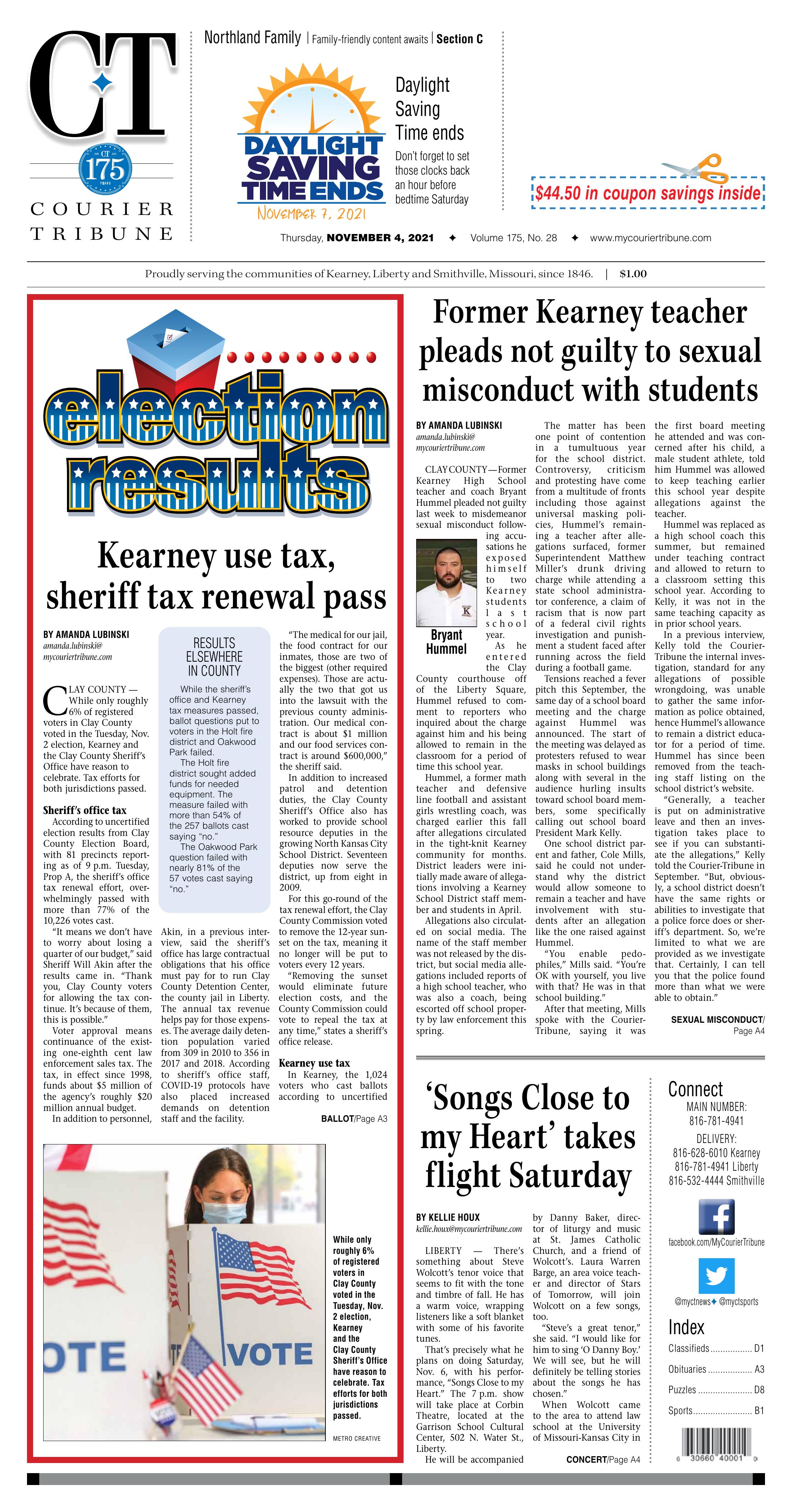 CLAY COUNTY — While only roughly 6% of registered voters in Clay County voted in the Tuesday, Nov. 2 election, Kearney and the Clay County Sheriff’s Office have reason to celebrate. Tax efforts for both jurisdictions passed.

According to uncertified election results from Clay County Election Board, with 81 precincts reporting as of 9 p.m. Tuesday, Prop A, the sheriff’s office tax renewal effort, overwhelmingly passed with more than 77% of the 10,226 votes cast.

“It means we don’t have to worry about losing a quarter of our budget,” said Sheriff Will Akin after the results came in. “Thank you, Clay County voters for allowing the tax continue. It’s because of them, this is possible.”

In addition to personnel, Akin, in a previous interview, said the sheriff’s office has large contractual obligations that his office must pay for to run Clay County Detention Center, the county jail in Liberty. The annual tax revenue helps pay for those expenses. The average daily detention population varied from 309 in 2010 to 356 in 2017 and 2018. According to sheriff’s office staff, COVID-19 protocols have also placed increased demands on detention staff and the facility.

“The medical for our jail, the food contract for our inmates, those are two of the biggest (other required expenses). Those are actually the two that got us into the lawsuit with the previous county administration. Our medical contract is about $1 million and our food services contract is around $600,000,” the sheriff said.

In addition to increased patrol and detention duties, the Clay County Sheriff’s Office also has worked to provide school resource deputies in the growing North Kansas City School District. Seventeen deputies now serve the district, up from eight in 2009.

For this go-round of the tax renewal effort, the Clay County Commission voted to remove the 12-year sunset on the tax, meaning it no longer will be put to voters every 12 years.

“Removing the sunset would eliminate future election costs, and the County Commission could vote to repeal the tax at any time,” states a sheriff’s office release.

In Kearney, the 1,024 voters who cast ballots according to uncertified results narrowly passed the use tax question on the ballot by 52%. This was the second time the city posed the question to voters.

“I appreciate the community understanding the need to modernize not only our collection of taxes with online vendors, but allowing us to not lose our sales tax with vehicles,” Mayor Randy Pogue told the Courier-Tribune Tuesday.

Passage also means current revenue of about $200,000 the city relies is no longer at risk from sales tax revenue when a resident purchases a car out of state. State legislation mandates if a use tax is not adopted by November 2022, that city revenue will be lost.

With approval, the city plans to allot $150,000 to hiring two police officers and providing them squad vehicles; $100,000 for the city’s first animal control officer and needed equipment; $200,000 to help create Hall Park, a park dedicated to seniors, as well as fund new pickleball courts; and $150,000 to a Nation Road sidewalk that would run from Cottonwood Creek Avenue north to Woodridge Road.

“We are going to start moving right away on our promise and I will be appointing a committee to make sure those tax dollars are spent in accordance,” said Pogue.

While the sheriff’s office and Kearney tax measures passed, ballot questions put to voters in the Holt fire district and Oakwood Park failed.

The Holt fire district sought added funds for needed equipment. The measure failed with more than 54% of the 257 ballots cast saying “no.”

The Oakwood Park question failed with nearly 81% of the 57 votes cast saying “no.” 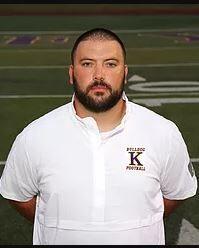 CLAY COUNTY — Former Kearney High School teacher and coach Bryant Hummel pleaded not guilty last week to misdemeanor sexual misconduct following accusations he exposed himself to two Kearney students last school year. As he entered the Clay County courthouse off of the Liberty Square, Hummel refused to comment to reporters who inquired about the charge against him and his being allowed to remain in the classroom for a period of time this school year. Hummel, a former math teacher and defensive line football and assistant girls wrestling coach, was charged earlier this fall after allegations circulated in the tight-knit Kearney community for months. District leaders were initially made aware of allegations involving a Kearney School District staff member and students in April. Allegations also circulated on social media. The name of the staff member was not released by the district, but social media allegations included reports of a high school teacher, who was also a coach, being escorted off school property by law enforcement this spring. The matter has been one point of contention in a tumultuous year for the school district. Controversy, criticism and protesting have come from a multitude of fronts including those against universal masking policies, Hummel’s remaining a teacher after allegations surfaced, former Superintendent Matthew Miller’s drunk driving charge while attending a state school administrator conference, a claim of racism that is now part of a federal civil rights investigation and punishment a student faced after running across the field during a football game. Tensions reached a fever pitch this September, the same day of a school board meeting and the charge against Hummel was announced. The start of the meeting was delayed as protesters refused to wear masks in school buildings along with several in the audience hurling insults toward school board members, some specifically calling out school board President Mark Kelly. One school district parent and father, Cole Mills, said he could not understand why the district would allow someone to remain a teacher and have involvement with students after an allegation like the one raised against Hummel. “You enable pedophiles,” Mills said. “You’re OK with yourself, you live with that? He was in that school building.” After that meeting, Mills spoke with the Courier-Tribune, saying it was the first board meeting he attended and was concerned after his child, a male student athlete, told him Hummel was allowed to keep teaching earlier this school year despite allegations against the teacher. Hummel was replaced as a high school coach this summer, but remained under teaching contract and allowed to return to a classroom setting this school year. According to Kelly, it was not in the same teaching capacity as in prior school years. In a previous interview, Kelly told the Courier-Tribune the internal investigation, standard for any allegations of possible wrongdoing, was unable to gather the same information as police obtained, hence Hummel’s allowance to remain a district educator for a period of time. Hummel has since been removed from the teaching staff listing on the school district’s website. “Generally, a teacher is put on administrative leave and then an investigation takes place to see if you can substantiate the allegations,” Kelly told the Courier-Tribune in September. “But, obviously, a school district doesn’t have the same rights or abilities to investigate that a police force does or sheriff’s department. So, we’re limited to what we are provided as we investigate that. Certainly, I can tell you that the police found more than what we were able to obtain.” According to the probable cause statement, the criminal investigation began in the spring after a school district administrator learned of accusations that Hummel exposed himself to two students and alerted police. The two students told investigators the incident happened after school when they were being assisted with homework in Hummel’s classroom. “Hummel did tell them if they told anyone, it would jeopardize their grades ...,” states the probable cause statement. The probable cause statement also alleges Hummel later video called the students while exposing himself and asked them to expose themselves to him. Hummel is also accused of asking the students to come to his residence when he was home alone. Hummel’s next court hearing is scheduled for 1:30 p.m. Nov. 22.

LIBERTY — There’s something about Steve Wolcott’s tenor voice that seems to fit with the tone and timbre of fall. He has a warm voice, wrapping listeners like a soft blanket with some of his favorite tunes.

That’s precisely what he plans on doing Saturday, Nov. 6, with his performance, “Songs Close to my Heart.” The 7 p.m. show will take place at Corbin Theatre, located at the Garrison School Cultural Center, 502 N. Water St., Liberty.

He will be accompanied by Danny Baker, director of liturgy and music at St. James Catholic Church, and a friend of Wolcott’s. Laura Warren Barge, an area voice teacher and director of Stars of Tomorrow, will join Wolcott on a few songs, too.

“Steve’s a great tenor,” she said. “I would like for him to sing ‘O Danny Boy.’ We will see, but he will definitely be telling stories about the songs he has chosen.”

When Wolcott came to the area to attend law school at the University of Missouri-Kansas City in the fall of 1973, he found his way to local musicals and community stages.

“I would say these are songs that have been part of me for over 40 years,” he explained. “There will be around 20 songs or so. Danny will sing a couple and I will sing with Laura.”

The duets most likely will be “Sunrise, Sunset” from “Fiddler on the Roof,” “Anything You Can Do” from “Annie Get Your Gun” and “All I Ask of You” from “Phantom of the Opera.”

“I haven’t sung with Steve before so this is a treat,” Barge said.

Wolcott, who served as president of the Corbin Theatre board, was instrumental in teaming with Clay County African American Legacy Inc. to use some of the former school’s space and stage for the theater group.

“I am excited to share some stories,” he said. “There are songs that I have always loved, auditioned with or my wife and I sing together.”

Wolcott serves as a song leader at St. James as well so he and Baker are together often.

“He’s so extremely talented,” Wolcott said. “I really am excited to offer those songs that I love such as ‘Some Enchanted Evening’ from ‘South Pacific’ or a little Frank Sinatra with Danny playing along.”

What: Steve Wolcott shares songs that have touched him in some way with "Songs Close to my Heart." His friends, Danny Baker and Laura Warren Barge, will join him on stage.