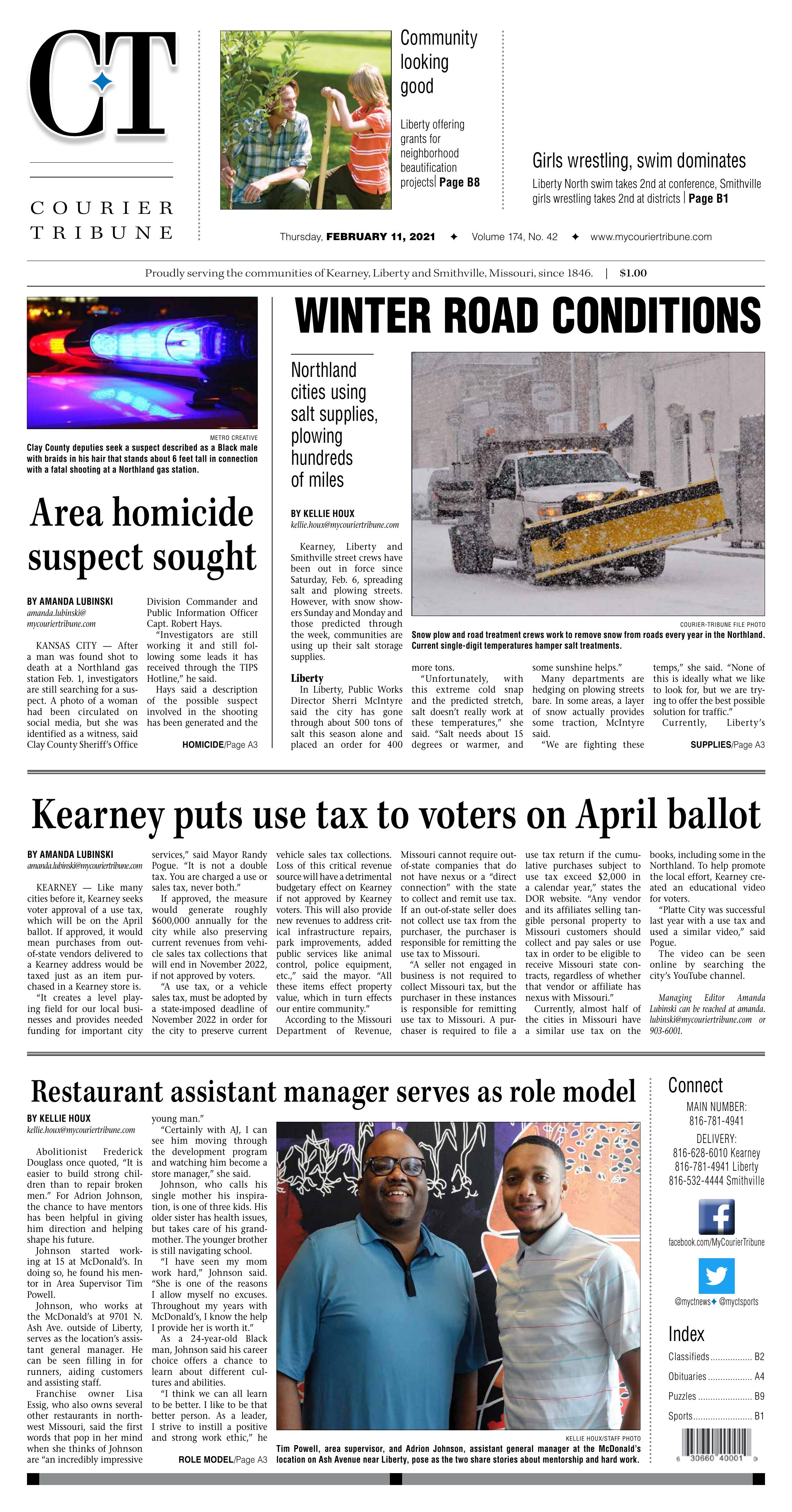 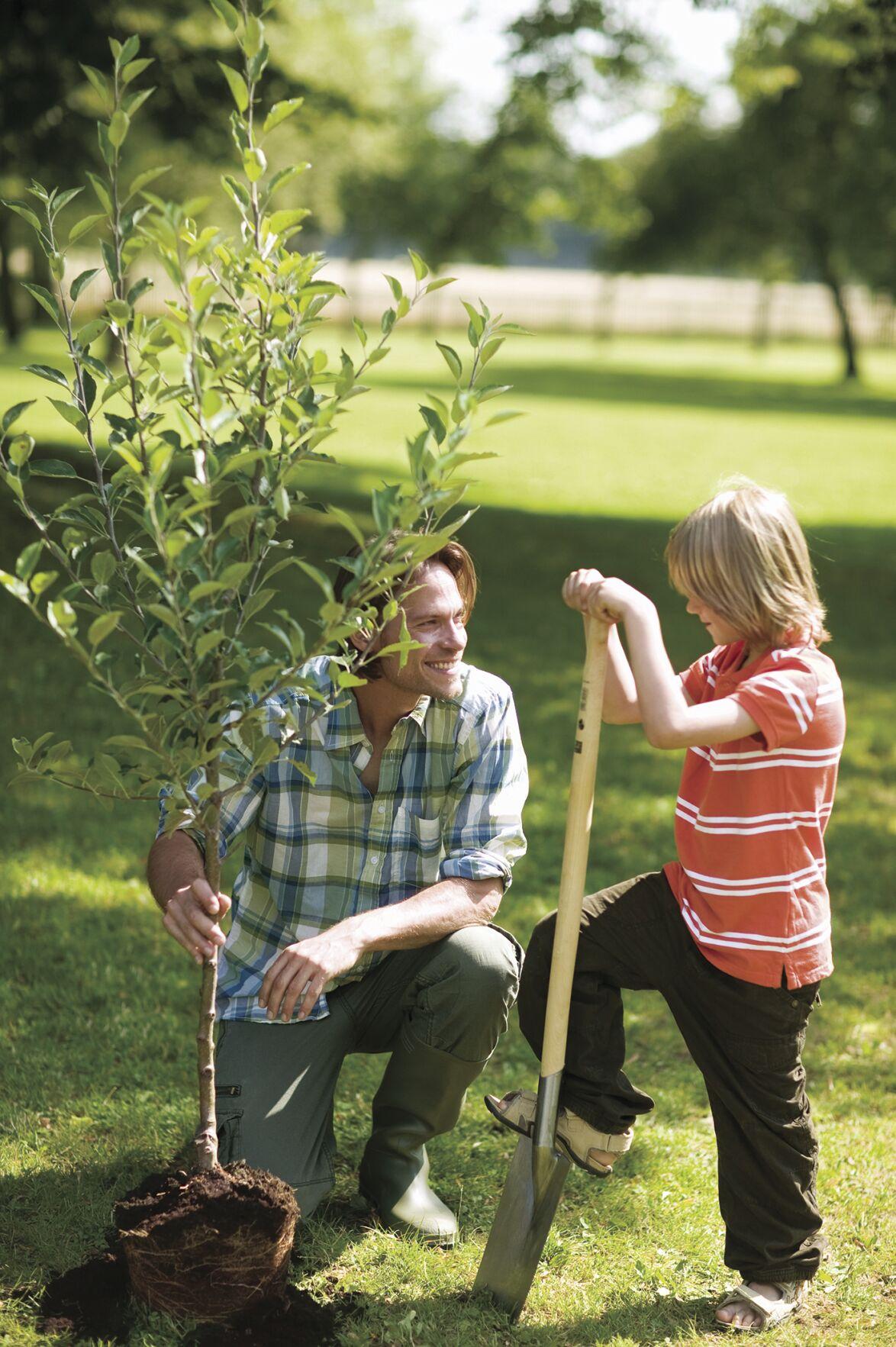 Kearney, Liberty and Smithville street crews have been out in force since Saturday, Feb. 6, spreading salt and plowing streets. However, with snow showers Sunday and Monday and those predicted through the week, communities are using up their salt storage supplies.

In Liberty, Public Works Director Sherri McIntyre said the city has gone through about 500 tons of salt this season alone and placed an order for 400 more tons.

“Unfortunately, with this extreme cold snap and the predicted stretch, salt doesn’t really work at these temperatures,” she said. “Salt needs about 15 degrees or warmer, and some sunshine helps.”

Many departments are hedging on plowing streets bare. In some areas, a layer of snow actually provides some traction, McIntyre said.

“We are fighting these temps,” she said. “None of this is ideally what we like to look for, but we are trying to offer the best possible solution for traffic.”

Currently, Liberty’s equipment is holding up, with the fleet running shifts sometimes up to nine hours or more. Liberty has more than 300 lane miles to treat.

Smithville’s Public Works Director Chuck Soules is in a similar conundrum as his Liberty counterpart. The city is also using its stores of salt and ordering more.

“Unfortunately, salt simply doesn’t work when it’s this cold,” he said. “We are at 11 degrees with a wind chill of zero. There’s always a balance in clearing roads, making them passable and getting the community to understand what passable roads are.”

For Soules, plowing to bare pavement can exacerbate the creation of potholes as plows can tear up pavement.

“Some drivers are making judgments on how to plow a certain area,” he said. “The crews that are in those trucks are making decisions on how they are plowing.”

Soules said the intersection of U.S. Highway 169 and Missouri Highway 92 is tough.

“People really need to be mindful of every intersection,” he said. “Don’t slam on the gas or the brake. Be mindful. If your commute (normally) takes 10 minutes, double it (in these types of conditions).”

In a usual season, Smithville goes through around 5,000 tons of salt, treating 110 lane miles.

“We were fortunate in the fall to have (aldermen) approve a contractor to help with snow removal,” Soules explained. “Remember, the crew is out and doing the best they can. Just give them the space they deserve when you come upon them.”

In Kearney, Donnie Smith, street and utilities director, finds himself behind the wheel of a plow if needed.

“In many areas, we decided to leave that snow for traction,” he said. “In others, we added sand and salt.”

Smith, who drives a pick-up, takes it out of four-wheel drive and tests intersections in two-wheel drive to gauge roadways in Kearney.

“If I can get around, I believe others can too,” he said. “Right now, we have six trucks out and about. The crews are running ragged. We try to think what is best on the roadway, especially in these unforgiving temperatures.”

As with the others, he urges driver caution at intersections and on hills.

To help promote the local use tax effort and educate voters on what passage would mean, Kearney created an educational video. The video can be seen online at youtube.com/watch?v=fy0W-9GftRg.

KEARNEY — Like many cities before it, Kearney seeks voter approval of a use tax, which will be on the April ballot. If approved, it would mean purchases from out-of-state vendors delivered to a Kearney address would be taxed just as an item purchased in a Kearney store is.

“It creates a level playing field for our local businesses and provides needed funding for important city services,” said Mayor Randy Pogue. “It is not a double tax. You are charged a use or sales tax, never both.”

If approved, the measure would generate roughly $600,000 annually for the city while also preserving current revenues from vehicle sales tax collections that will end in November 2022, if not approved by voters.

“A use tax, or a vehicle sales tax, must be adopted by a state-imposed deadline of November 2022 in order for the city to preserve current vehicle sales tax collections. Loss of this critical revenue source will have a detrimental budgetary effect on Kearney if not approved by Kearney voters. This will also provide new revenues to address critical infrastructure repairs, park improvements, added public services like animal control, police equipment, etc.,” said the mayor. “All these items effect property value, which in turn effects our entire community.”

According to the Missouri Department of Revenue, Missouri cannot require out-of-state companies that do not have nexus or a “direct connection” with the state to collect and remit use tax. If an out-of-state seller does not collect use tax from the purchaser, the purchaser is responsible for remitting the use tax to Missouri.

“A seller not engaged in business is not required to collect Missouri tax, but the purchaser in these instances is responsible for remitting use tax to Missouri. A purchaser is required to file a use tax return if the cumulative purchases subject to use tax exceed $2,000 in a calendar year,” states the DOR website. “Any vendor and its affiliates selling tangible personal property to Missouri customers should collect and pay sales or use tax in order to be eligible to receive Missouri state contracts, regardless of whether that vendor or affiliate has nexus with Missouri.”

Currently, almost half of the cities in Missouri have a similar use tax on the books, including some in the Northland. To help promote the local effort, Kearney created an educational video for voters.

“Platte City was successful last year with a use tax and used a similar video,” said Pogue.

The video can be seen online by searching the city’s YouTube channel.

Tim Powell, area supervisor, and Adrion Johnson, assistant general manager at the McDonald’s location on Ash Avenue near Liberty, pose as the two share stories about mentorship and hard work.

Abolitionist Frederick Douglass once quoted, “It is easier to build strong children than to repair broken men.” For Adrion Johnson, the chance to have mentors has been helpful in giving him direction and helping shape his future.

Johnson started working at 15 at McDonald’s. In doing so, he found his mentor in Area Supervisor Tim Powell.

Johnson, who works at the McDonald’s at 9701 N. Ash Ave. outside of Liberty, serves as the location’s assistant general manager. He can be seen filling in for runners, aiding customers and assisting staff.

“I love McDonald’s,” he said. “I find new ways to challenge myself within the organization.”Franchise owner Lisa Essig, who also owns several other restaurants in northwest Missouri, said the first words that pop in her mind when she thinks of Johnson are “an incredibly impressive young man.”

“Certainly with AJ, I can see him moving through the development program and watching him become a store manager,” she said.

Johnson, who calls his single mother his inspiration, is one of three kids. His older sister has health issues, but takes care of his grandmother. The younger brother is still navigating school.

“I have seen my mom work hard,” Johnson said. “She is one of the reasons I allow myself no excuses. Throughout my years with McDonald’s, I know the help I provide her is worth it.”

As a 24-year-old Black man, Johnson said his career choice offers a chance to learn about different cultures and abilities.

“I think we can all learn to be better. I like to be that better person. As a leader, I strive to instill a positive and strong work ethic,” he explained. “I want people to see their similarities as much as their differences.”

Johnson appreciates the diversity in his own home as well as on the job. Most of the store employees at the Ash location are women. There is also an employee who is deaf.

“I believe that if I can get to know a person, and be a good listener, I can be better at my job,” he said. “I know that I am coachable and I strive to help others be the same way. It helps us all become that team.”

As a high school student, Johnson found himself shaped by McDonald’s and those around him at the Raytown location, including Powell and his best friend, Annaya Newton. He admits he struggled some after her death in a car accident.

“I chose McDonald’s because my parents met at a McDonald’s,” he said. “My best friend and Tim were there. I like to bust stereotypes. I know that with hard work, I can advance here. It’s not a place that hires deadbeats, but students, parents and more. In many ways, I honor Annaya as well. Friends like her push you to be better.”

In the next few years, Johnson hopes to become a general manager and eventually a franchise owner.

Johnson said Powell has modeled the right behavior and his success.

“I watched his ability to raise a happy family,” Johnson said. “He has my back. I would like to be able to do that for other young African-Americans, too. I want to help those who are struggling.”

Johnson said he wants to demonstrate those right behaviors as well, including helping others before self.

“Have kindness in your heart while taking your job seriously,” he said. “I want to live a happy life. I had another mentor tell me that life is a bunch of calculated choices and sometimes those choices don’t always make for a happy day. However, the day ends and there is another chance tomorrow to make things better.”

Powell said when he met Johnson’s mother, the two knew Johnson needed someone.

“I have watched him grow from a kid to a young man,” he said. “I knew one day he would be special. He is a natural leader, hard worker and motivated. He’s an outstanding young man.”

“He works hard with both the customers and the staff,” Essig said. “He is definitely is a role model. He has a great self-awareness ... which is appreciated in our Essig McFamily.”

Clay County deputies seek a suspect described as a Black male with braids in his hair that stands about 6 feet tall in connection with a fatal shooting at a Northland gas station.

KANSAS CITY — After a man was found shot to death at a Northland gas station Feb. 1, investigators are still searching for a suspect. A photo of a woman had been circulated on social media, but she was identified as a witness, said Clay County Sheriff’s Office Division Commander and Public Information Officer Capt. Robert Hays.

“Investigators are still working it and still following some leads it has received through the TIPS Hotline,” he said.

Hays said a description of the possible suspect involved in the shooting has been generated and the suspect is believed to be a Black male who stands about 6-feet to 6-feet-1-inch tall, weighs about 175 pounds, is clean shaven and has braids of some kind in his hair.

Clay County sheriff’s deputies responded to the Phillips 66 gas station in the 3600 block of Northeast Randolph Road in Kansas City around 9:10 p.m. last Monday. At the scene, a man was found dead from a gunshot wound to the head.

Anyone with information in the case is urged to call the TIPS Hotline at 474-TIPS (8477).