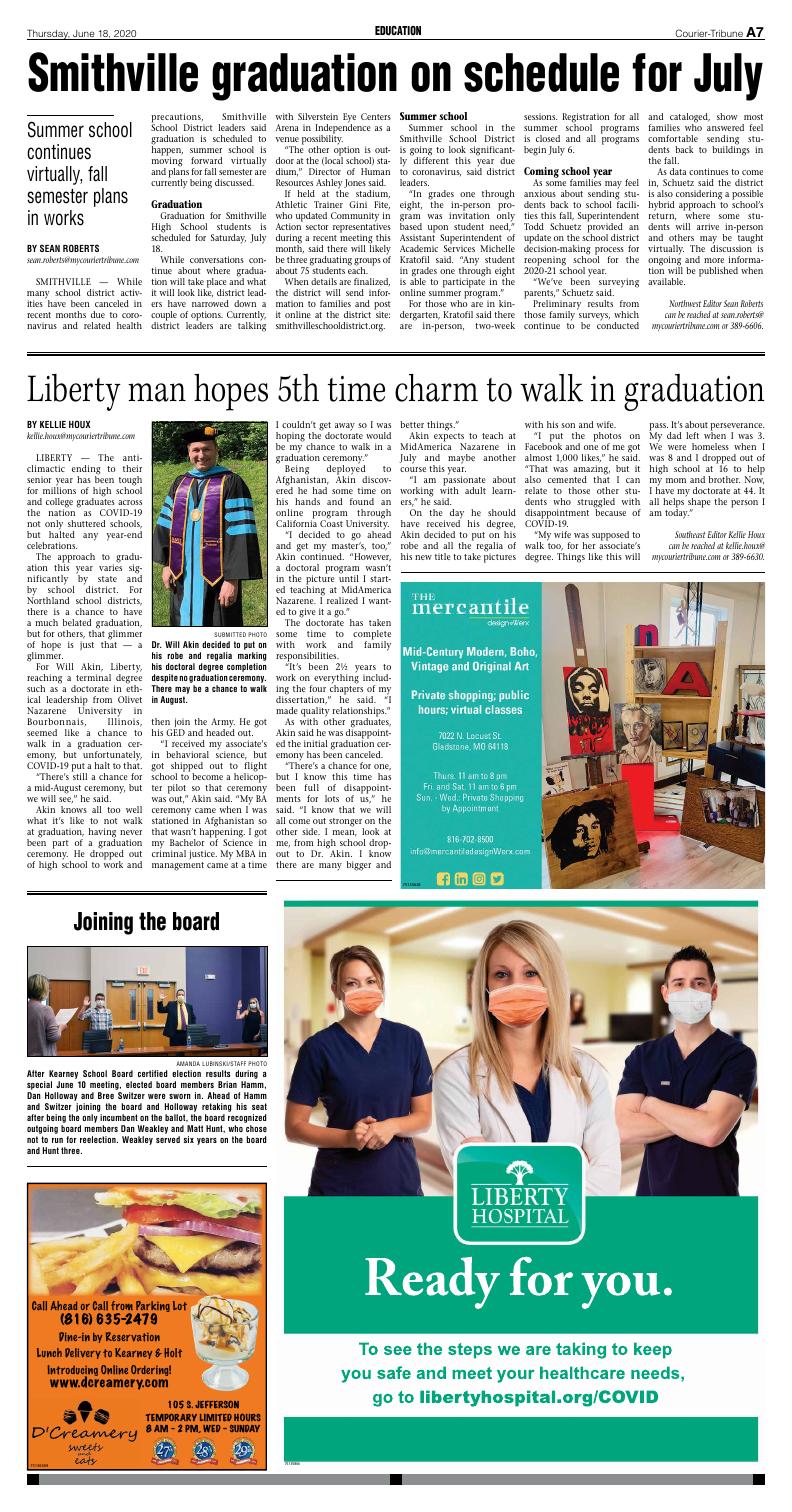 Smithville teachers and their families gathered in downtown Smithville for a car parade earlier this spring to honor graduating seniors. While families were unsure if a graduation would happen, the district is planning to move forward with plans to hold a graduation ceremony July 18. The venue of graduation remains to be decided.

SMITHVILLE — While many school district activities have been canceled in recent months due to coronavirus and related health precautions, Smithville School District leaders said graduation is scheduled to happen, summer school is moving forward virtually and plans for fall semester are currently being discussed.

While conversations continue about where graduation will take place and what it will look like, district leaders have narrowed down a couple of options. Currently, district leaders are talking with Silverstein Eye Centers Arena in Independence as a venue possibility.

“The other option is outdoor at the (local school) stadium,” Director of Human Resources Ashley Jones said.

If held at the stadium, Athletic Trainer Gini Fite, who updated Community in Action sector representatives during a recent meeting this month, said there will likely be three graduating groups of about 75 students each.

When details are finalized, the district will send information to families and post it online at the district site: smithvilleschooldistrict.org.

Summer school in the Smithville School District is going to look significantly different this year due to coronavirus, said district leaders.

For those who are in kindergarten, Kratofil said there are in-person, two-week sessions. Registration for all summer school programs is closed and all programs begin July 6.

As some families may feel anxious about sending students back to school facilities this fall, Superintendent Todd Schuetz provided an update on the school district decision-making process for reopening school for the 2020-21 school year.

Preliminary results from those family surveys, which continue to be conducted and cataloged, show most families who answered feel comfortable sending students back to buildings in the fall.

As data continues to come in, Schuetz said the district is also considering a possible hybrid approach to school’s return, where some students will arrive in-person and others may be taught virtually. The discussion is ongoing and more information will be published when available.

Dr. Will Akin decided to put on his robe and regalia marking his doctoral degree completion despite no graduation ceremony. There may be a chance to walk in August.

LIBERTY — The anticlimactic ending to their senior year has been tough for millions of high school and college graduates across the nation as COVID-19 not only shuttered schools, but halted any year-end celebrations.

School officials across the country agree, and many are going to great and creative lengths to make graduation day memorable. The approach to graduation this year varies significantly by state and by school district. For Northland school districts, there is a chance to have a much belated graduation, but for others, that glimmer of hope is just that — a glimmer.

For Will Akin, Liberty, reaching a terminal degree such as a doctorate in ethical leadership from Olivet Nazarene University in Bourbonnais, Illinois, seemed like a chance to walk in a graduation ceremony, but unfortunately, COVID-19 put a halt to that.

“There’s still a chance for a mid-August ceremony, but we will see,” he said.

Akin knows all too well what it’s like to not walk at graduation, having never been part of a graduation ceremony. He dropped out of high school to work and then join the Army. He got his GED and headed out.

“I received my associate’s in behavioral science, but got shipped out to flight school to become a helicopter pilot so that ceremony was out,” Akin said. “My BA ceremony came when I was stationed in Afghanistan so that wasn’t happening. I got my Bachelor of Science in criminal justice. My MBA in management came at a time I couldn’t get away so I was hoping the doctorate would be my chance to walk in a graduation ceremony.”

Akin said when he was younger, school was not for him.

“When I was in airborne school, there were nine of us talking about promotions and it came up that to be promoted, college would be part of the equation,” he said. “I was the only one to get my associate’s degree of that nine.”

Being deployed to Afghanistan, Akin discovered he had some time on his hands and found an online program through California Coast University.

“This time, it was easier for me and I got super excited,” he said. “I decided to go ahead and get my master’s, too,” Akin continued. “However, a doctoral program wasn’t in the picture until I started teaching at MidAmerica Nazarene. I realized I wanted to give it a go.”

The doctorate has taken some time to complete with work and family responsibilities.

“It’s been 2½ years to work on everything including the four chapters of my dissertation,” he said. “I made quality relationships.”

As with other graduates, Akin said he was disappointed the initial graduation ceremony has been canceled.

“There’s a chance for one, but I know this time has been full of disappointments for lots of us,” he said. “I know that we will all come out stronger on the other side. I mean, look at me, from high school dropout to Dr. Akin. I know there are many bigger and better things.”

Akin expects to teach at MidAmerica Nazarene in July and maybe another course this year.

“I am passionate about working with adult learners,” he said.

On the day he should have received his degree, Akin decided to put on his robe and all the regalia of his new title to take pictures with his son and wife.

“I put the photos on Facebook and one of me got almost 1,000 likes,” he said. “That was amazing, but it also cemented that I can relate to those other students who struggled with disappointment because of COVID-19.

“We can all relate to each other. My wife was supposed to walk too, for her associate’s degree. Things like this will pass. It’s about perseverance. My dad left when I was 3. We were homeless when I was 8 and I dropped out of high school at 16 to help my mom and brother. Now, I have my doctorate at 44. It all helps shape the person I am today.” 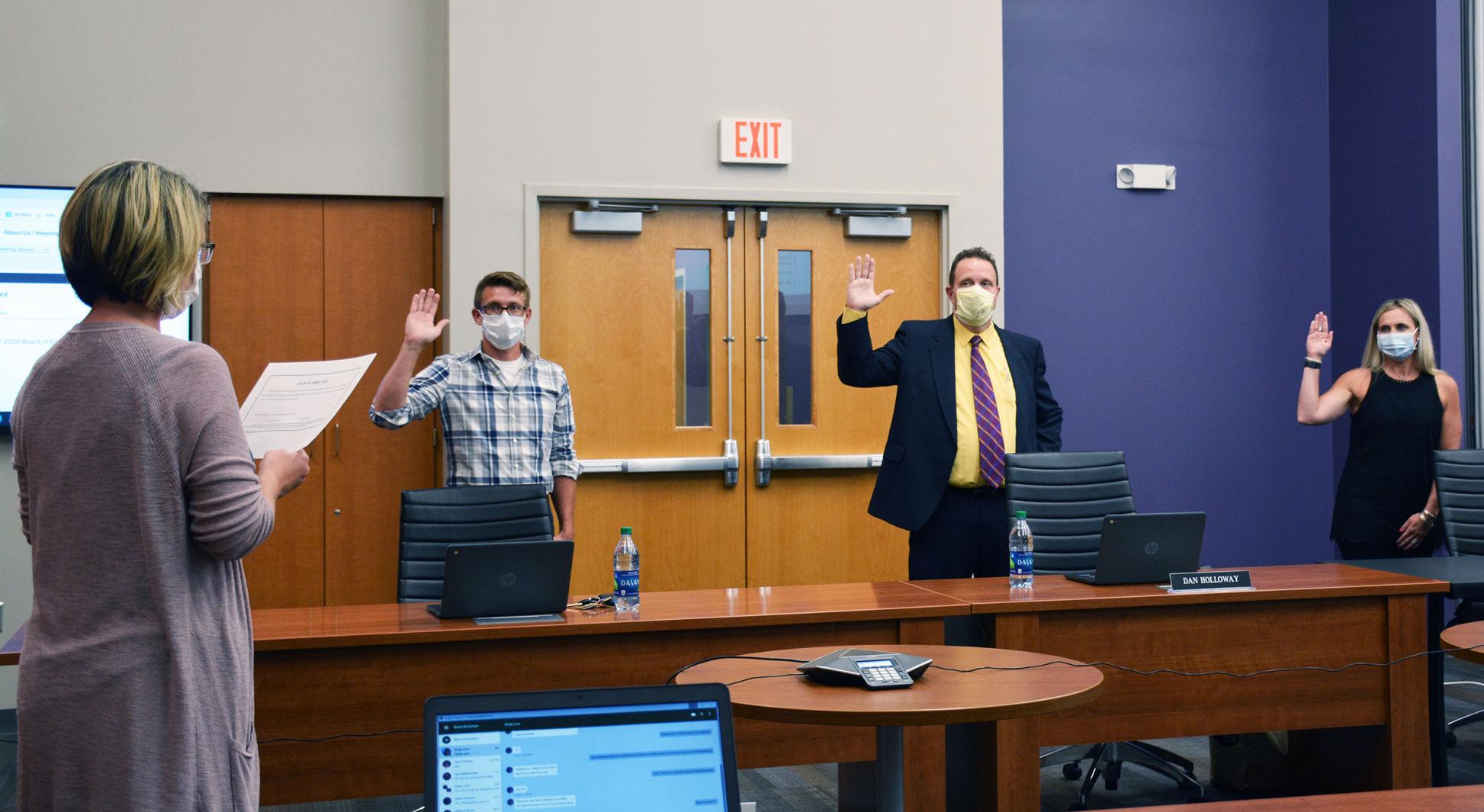 After Kearney School Board certified election results during a special June 10 meeting, elected board members Brian Hamm, Dan Holloway and Bree Switzer were sworn in. Ahead of Hamm and Switzer joining the board and Holloway retaking his seat after being the only incumbent on the ballot, the board recognized outgoing board members Dan Weakley and Matt Hunt, who chose not to run for reelection. Weakley served six years on the board and Hunt three. 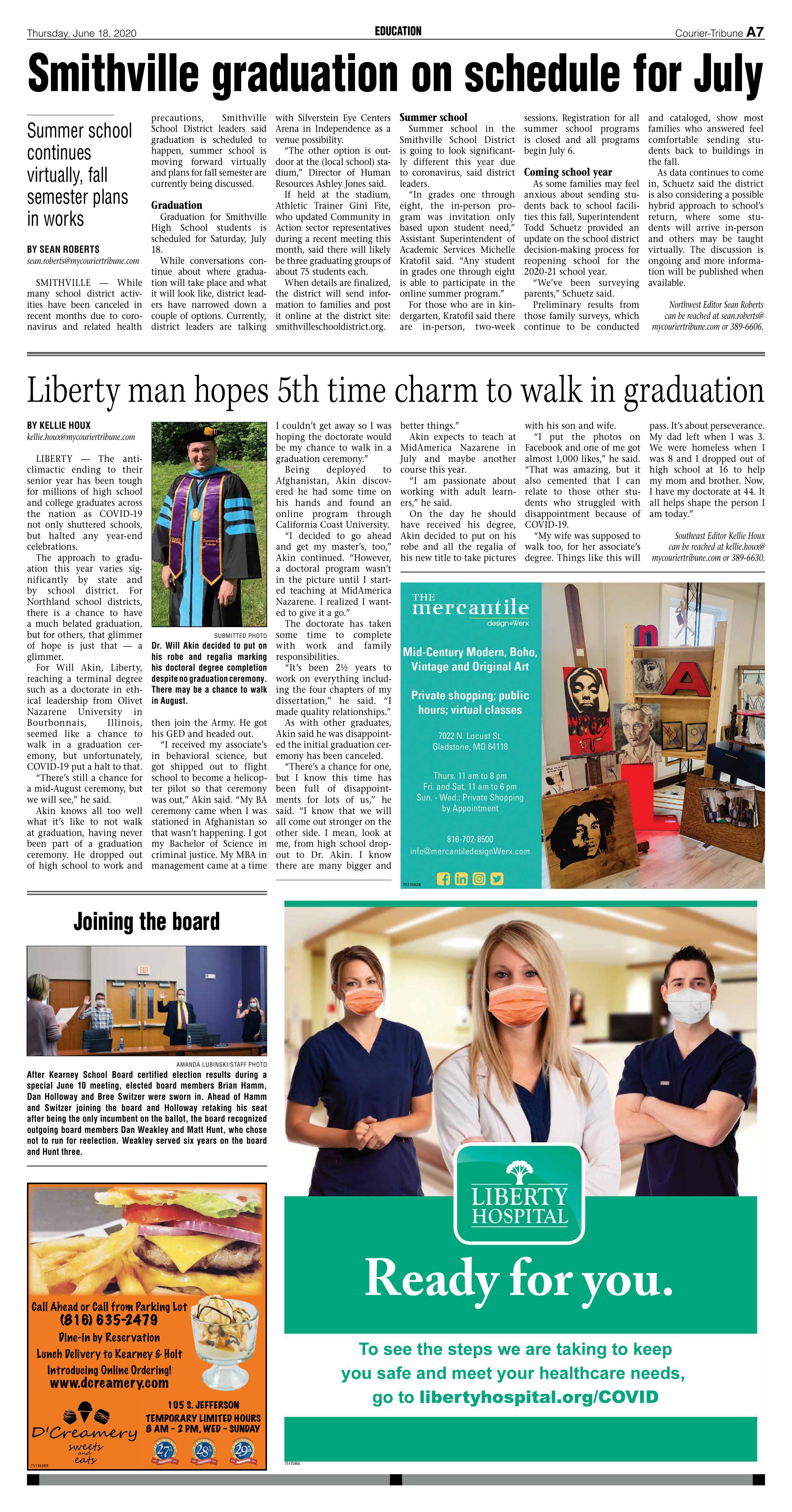