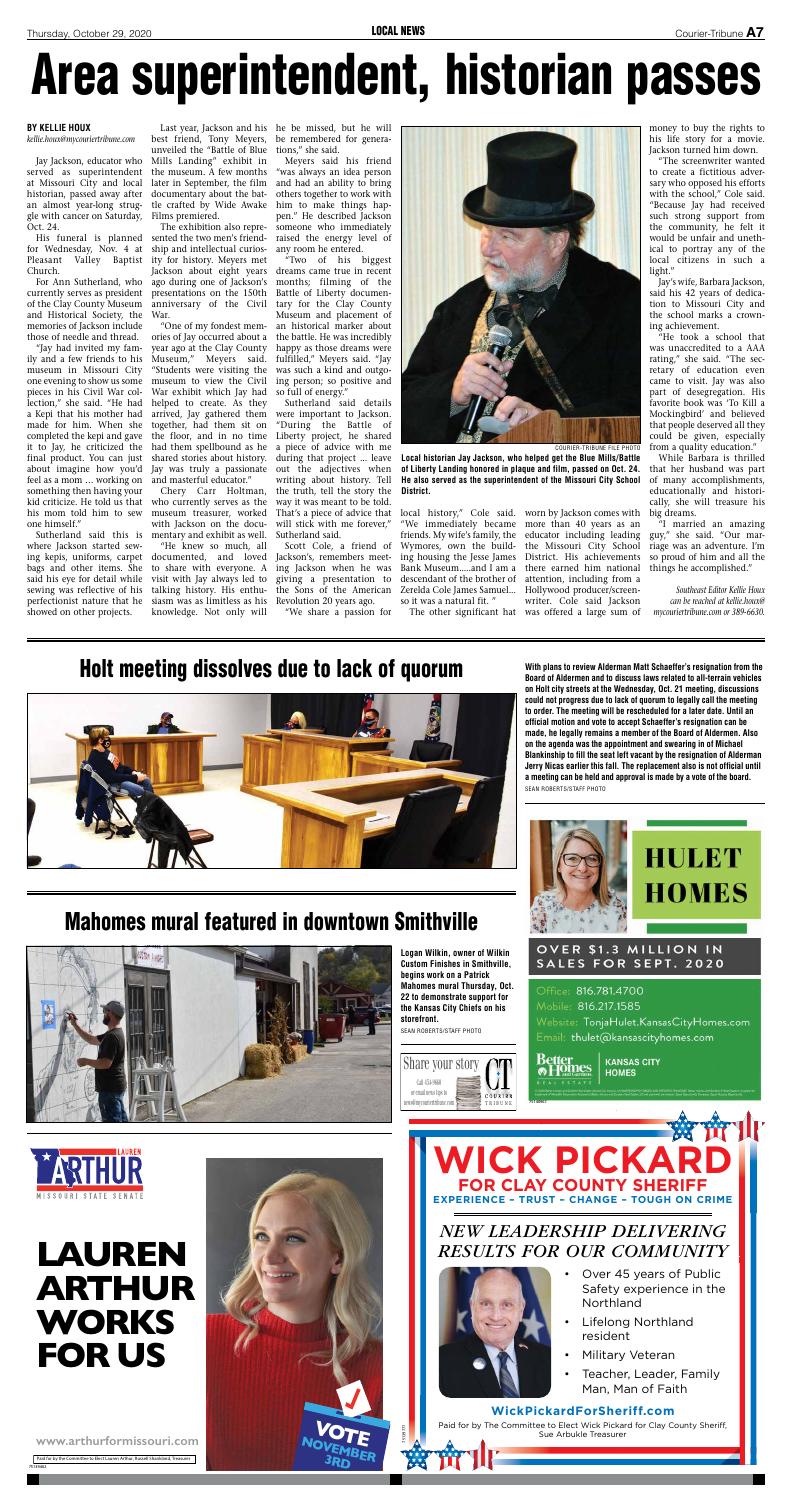 Local historian Jay Jackson, who helped get the Blue Mills/Battle of Liberty Landing honored in plaque and film, passed on Oct. 24. He also served as the superintendent of the Missouri City School District.

Jay Jackson, educator who served as superintendent at Missouri City and local historian, passed away after an almost year-long struggle with cancer on Saturday, Oct. 24.

His funeral is planned for Wednesday, Nov. 4 at Pleasant Valley Baptist Church.

For Ann Sutherland, who currently serves as president of the Clay County Museum and Historical Society, the memories of Jackson include those of needle and thread.

“Jay had invited my family and a few friends to his museum in Missouri City one evening to show us some pieces in his Civil War collection,” she said. “He had a Kepi that his mother had made for him. When she completed the kepi and gave it to Jay, he criticized the final product. You can just about imagine how you’d feel as a mom … working on something then having your kid criticize. He told us that his mom told him to sew one himself.”

Sutherland said this is where Jackson started sewing kepis, uniforms, carpet bags and other items. She said his eye for detail while sewing was reflective of his perfectionist nature that he showed on other projects.

Last year, Jackson and his best friend, Tony Meyers, unveiled the “Battle of Blue Mills Landing” exhibit in the museum. A few months later in September, the film documentary about the battle crafted by Wide Awake Films premiered.

The exhibition also represented the two men’s friendship and intellectual curiosity for history. Meyers met Jackson about eight years ago during one of Jackson’s presentations on the 150th anniversary of the Civil War.

“One of my fondest memories of Jay occurred about a year ago at the Clay County Museum,” Meyers said. “Students were visiting the museum to view the Civil War exhibit which Jay had helped to create. As they arrived, Jay gathered them together, had them sit on the floor, and in no time had them spellbound as he shared stories about history. Jay was truly a passionate and masterful educator.”

Chery Carr Holtman, who currently serves as the museum treasurer, worked with Jackson on the documentary and exhibit as well.

“He knew so much, all documented, and loved to share with everyone. A visit with Jay always led to talking history. His enthusiasm was as limitless as his knowledge. Not only will he be missed, but he will be remembered for generations,” she said.

Meyers said his friend “was always an idea person and had an ability to bring others together to work with him to make things happen.” He described Jackson someone who immediately raised the energy level of any room he entered.

“Two of his biggest dreams came true in recent months; filming of the Battle of Liberty documentary for the Clay County Museum and placement of an historical marker about the battle. He was incredibly happy as those dreams were fulfilled,” Meyers said. “Jay was such a kind and outgoing person; so positive and so full of energy.”

Sutherland said details were important to Jackson. “During the Battle of Liberty project, he shared a piece of advice with me during that project ... leave out the adjectives when writing about history. Tell the truth, tell the story the way it was meant to be told. That’s a piece of advice that will stick with me forever,” Sutherland said.

Scott Cole, a friend of Jackson’s, remembers meeting Jackson when he was giving a presentation to the Sons of the American Revolution 20 years ago.

“We share a passion for local history,” Cole said. “We immediately became friends. My wife’s family, the Wymores, own the building housing the Jesse James Bank Museum.....and I am a descendant of the brother of Zerelda Cole James Samuel...so it was a natural fit. We had many a debate on events related to the James Boys....as well as other facets of Clay County history.”

The other significant hat worn by Jackson comes with more than 40 years as an educator including leading the Missouri City School District. His achievements there earned him national attention, including from a Hollywood producer/screenwriter. Cole said Jackson was offered a large sum of money to buy the rights to his life story for a movie. Jackson turned him down.

“The screenwriter wanted to create a fictitious adversary who opposed his efforts with the school,” Cole said. “Because Jay had received such strong support from the community, he felt it would be unfair and unethical to portray any of the local citizens in such a light.”

Jay’s wife, Barbara Jackson, said his 42 years of dedication to Missouri City and the school marks a crowning achievement.

“He took a school that was unaccredited to a AAA rating,” she said. “The secretary of education even came to visit. Jay was also part of desegregation. His favorite book was ‘To Kill a Mockingbird’ and believed that people deserved all they could be given, especially from a quality education.”

While Barbara is thrilled that her husband was part of many accomplishments, educationally and historically, she will treasure his big dreams.

“I married an amazing guy,” she said. “Our marriage was an adventure. I’m so proud of him and all the things he accomplished.” 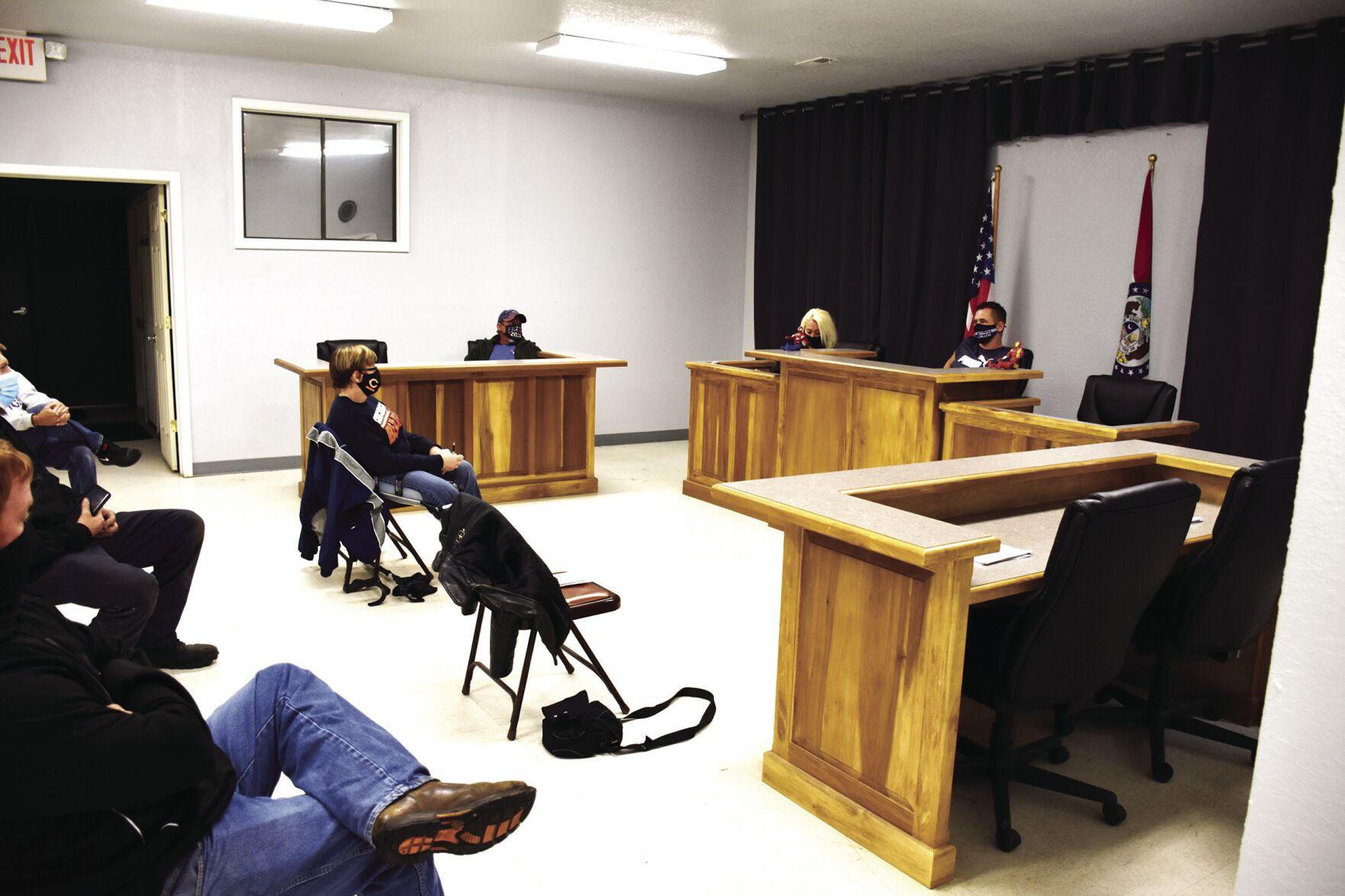 With plans to review Alderman Matt Schaeffer’s resignation from the Board of Aldermen and to discuss laws related to all-terrain vehicles on Holt city streets at the Wednesday, Oct. 21 meeting, discussions could not progress due to lack of quorum to legally call the meeting to order. The meeting will be rescheduled for a later date. Until an official motion and vote to accept Schaeffer’s resignation can be made, he legally remains a member of the Board of Aldermen. Also on the agenda was the appointment and swearing in of Michael Blankinship to fill the seat left vacant by the resignation of Alderman Jerry Nicas earlier this fall. The replacement also is not official until a meeting can be held and approval is made by a vote of the board. 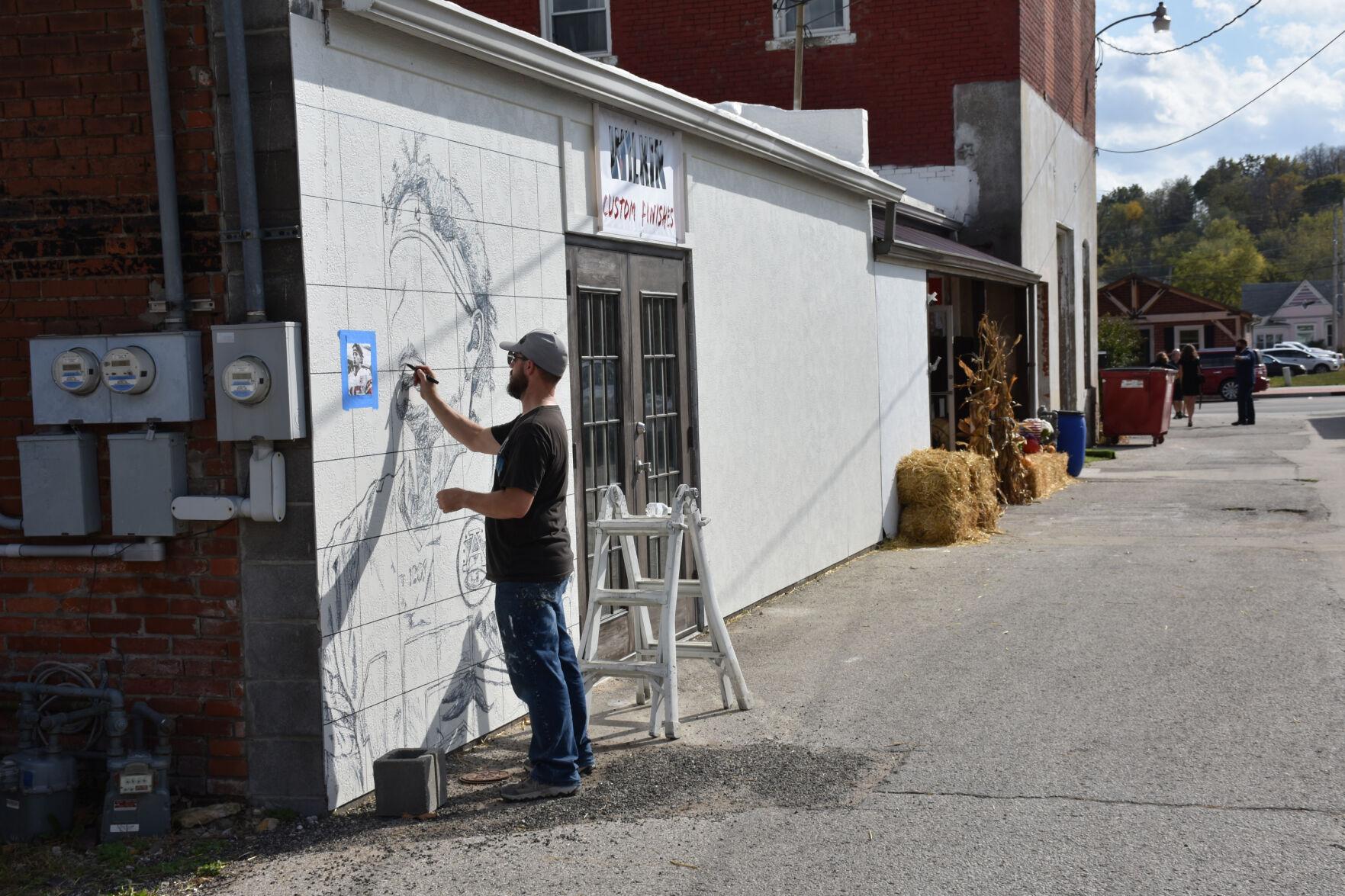 Logan Wilkin, owner of Wilkin Custom Finishes in Smithville, begins work on a Patrick Mahomes mural Thursday, Oct. 22 to demonstrate support for the Kansas City Chiefs on his storefront. 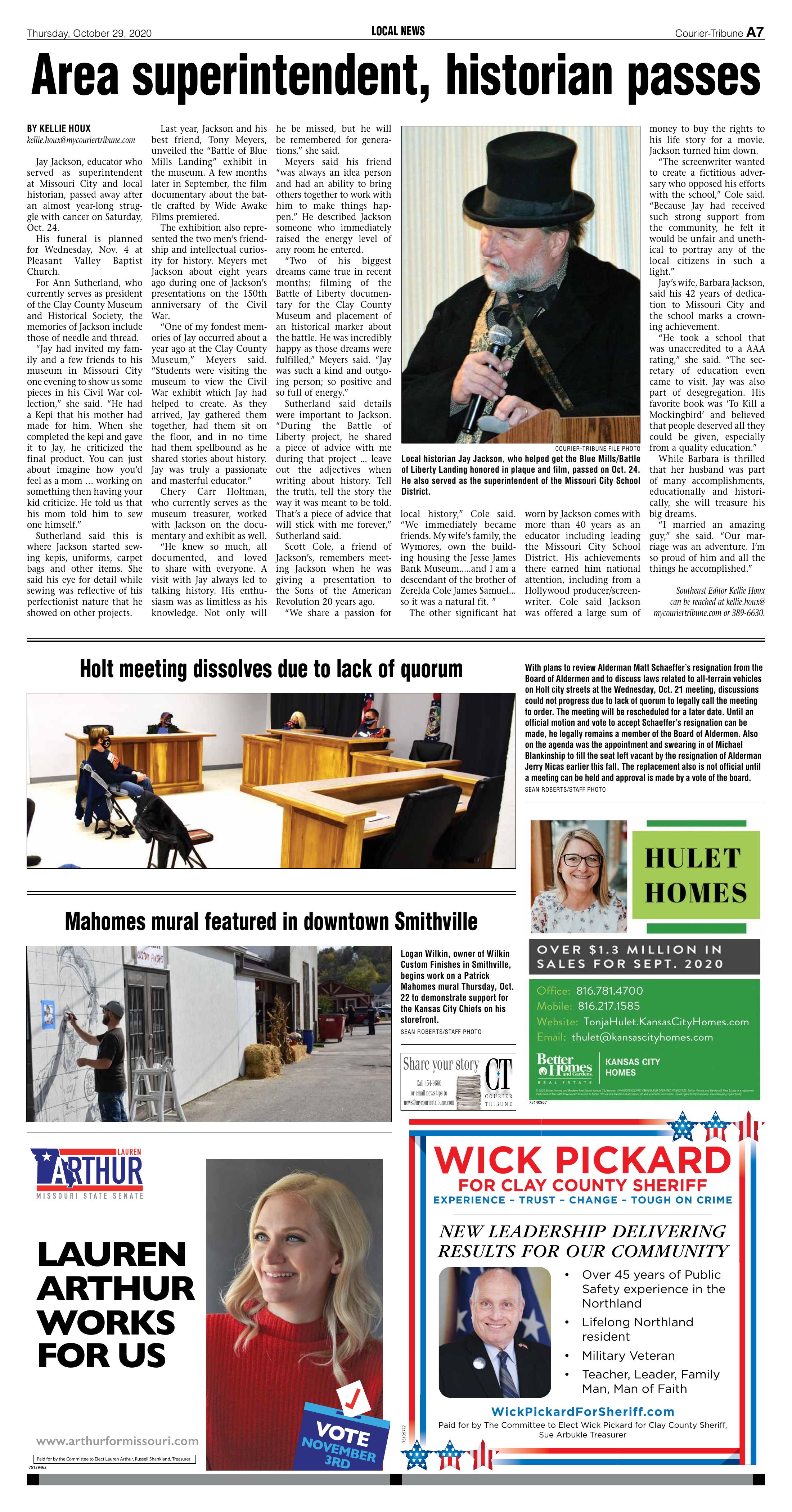