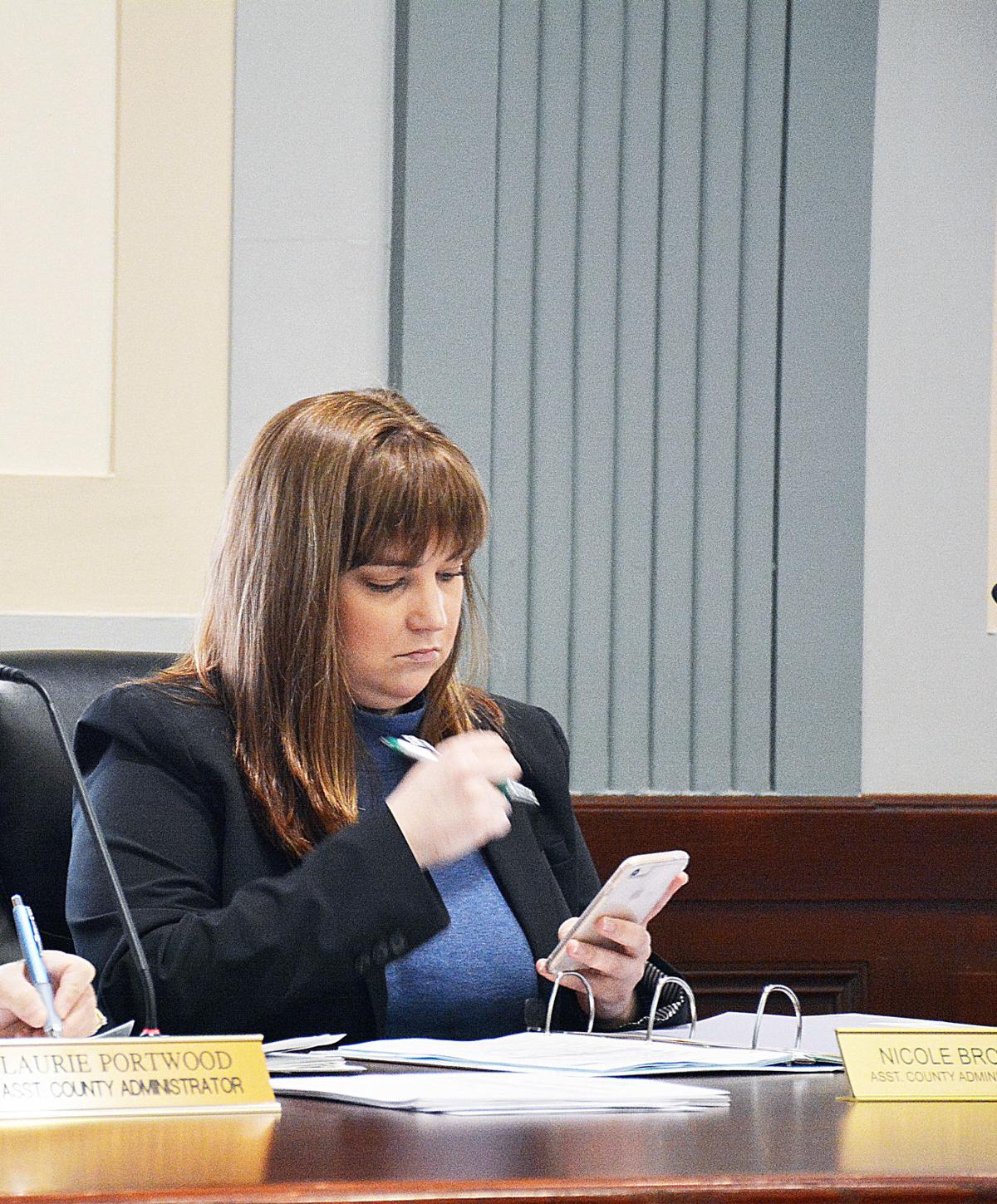 A housing deal for Assistant County Administrator Nicole Brown, seen here at the Monday, Feb. 24 county commission meeting, is one of the lease contracts at the center of controversy among county-elected leaders over free rent given to some county employees for providing on-call services around the county. 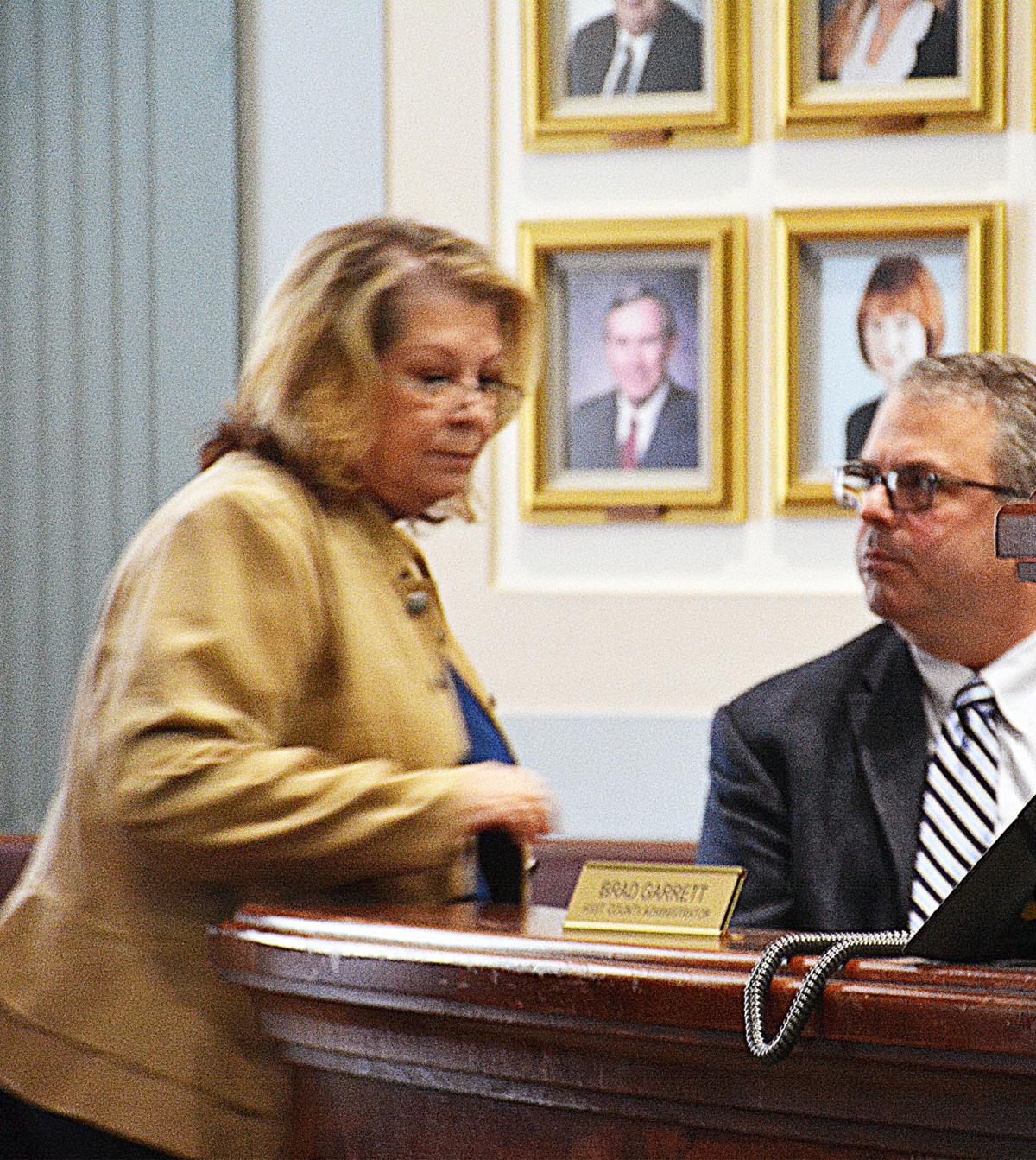 A housing deal for Assistant County Administrator Brad Garrett, seen here at the Monday, Feb. 24 county commission meeting, is also one of the lease contracts at the center of controversy among county-elected leaders over free rent given to some county employees for providing on-call services around the county.

A housing deal for Assistant County Administrator Nicole Brown, seen here at the Monday, Feb. 24 county commission meeting, is one of the lease contracts at the center of controversy among county-elected leaders over free rent given to some county employees for providing on-call services around the county.

A housing deal for Assistant County Administrator Brad Garrett, seen here at the Monday, Feb. 24 county commission meeting, is also one of the lease contracts at the center of controversy among county-elected leaders over free rent given to some county employees for providing on-call services around the county.

CLAY COUNTY — As news of a housing deal for two of the county’s top paid officials is circulating through the Kansas City metro area, one commissioner is questioning why the housing perk is now making headlines when the contract was executed in 2017.

Eastern Commissioner Luann Ridgeway said the deal to allow two of the county’s three assistant county administrators was done three years ago with contracts executed by former County Administrator Dean Brookshier. The open-ended contracts, signed by Assistant County Administrators Nicole Brown and Brad Garrett, both who make more than $100,000 annually, are dated May 1, but do not include a year. Both administrators’ leases stipulate in exchange for free rent, they will pay utilities and have to be on call for at least six months and “provide visual security to the property surrounding the residence.”

Ridgeway said authority to decide who can live in county-managed or owned property, of which there are a handful throughout Clay County, was given to the former administrator years prior because too many decisions made by the commission up to that point were construed as politically motivated. In addition to the two residences occupied by county administrators, one property is vacant, while others, Ridgeway said, are occupied by employees across public safety and parks departments.

“The decision was made to turn it over to the county administrator who was hired and paid to administrate and manage. We said, ‘Let’s just not have the political people making the decisions and you make the decisions. If it’s horrible, well, you directly report to us, so then we’ll talk about it,’” she told the Courier-Tribune on Monday, Feb. 24. “It was a way to remove the political football.”

The authority delegated to the county administrator to decide housing was part of unprecedented control of county operations turned over to Brookshier in a renegotiated employment contract executed in a closed-door commission meeting in March of 2017. The contract was approved with a vote of 2-1 with Ridgeway and Western Commissioner Gene Owen voting in favor and Presiding Commissioner Jerry Nolte against. In addition to a 25% pay increase, putting his salary near $150,000 annually, the county administrator was made responsible for directing and managing county operations and personnel, which fall under the commission’s jurisdiction. Additionally, the contract delegated Brookshier as the authority for day-to-day operations of county facilities including facility alterations, demolition and new construction. He was also given power to determine office locations of all personnel and elected officeholders within county facilities, and who has access to county properties; and hiring, promoting, disciplining and terminating county personnel under the commission’s branch of county government.

Brookshier resigned in 2018, receiving a severance package of more than $240,000. The position remains unfilled, but the authority delegated by the commission to Brookshier was given to Brown, Garrett and fellow Assistant County Administrator Laurie Portwood after the resignation.

Free rent in exchange for being on call is a common practice in Clay and other counties, but some Clay County elected officials and residents question why previous contracts did not include dates, were not executed by the commission directly in an open session and why administrators and not solely parks employees or other maintenance personnel directly responsible for emergency repairs would be allowed to live in county housing.

Nolte tried to add a proposal to the Monday, Feb. 24, commission session agenda where, if approved, “all leases related to county-owned or administered properties shall come before the county commission in an open public session and receive an affirmative vote of the commission before such lease agreements are executed.”

County staff, which includes an outside legal firm hired by the county, refused to allow the item on the agenda, Nolte said.

Ridgeway said housing leases for employees were executed as part of a innovative management approach taken by Brookshier to improve county response to complaints and customer service, which she thinks has worked. Ridgeway said the number of complaints she received about parks, trails and other amenities regarding county properties, particularly those at Smithville Lake, have rapidly decreased since authority was delegated to administrators.

When asked by the Courier-Tribune if Ridgeway had records of prior complaints she alerted staff to or documentation indicating the number of complaints that were resolved in faster response times after the management authority and housing allowances switched, she said she did not think to keep them and measures improvement more qualitatively.

“I can see customer service has improved, (parks) revenues have improved and our overall management has improved. We are bringing things up to code that probably should have been brought up to code a long time ago,” she said.