At the Aug. 24 Liberty City Council meeting, more than 45 people were ready to share statements about keeping the Confederate monument in Fairview-New Hope cemeteries. 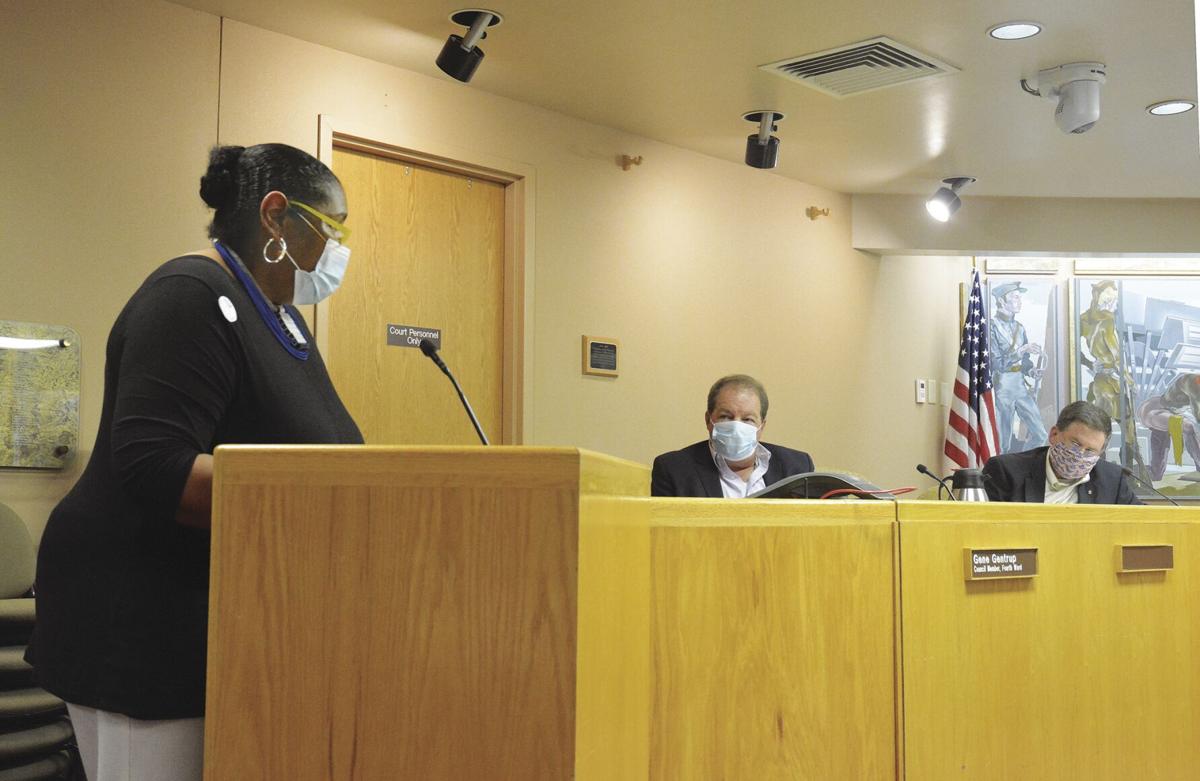 Theresa Byrd speaks to the Liberty City Council Aug. 10 about the removal of the Confederate soldier statue in Fairview-New Hope cemeteries. She and several members of the Clay County African American Legacy Inc. spoke in favor of the statue’s removal at city council meetings this month.

At the Aug. 24 Liberty City Council meeting, more than 45 people were ready to share statements about keeping the Confederate monument in Fairview-New Hope cemeteries.

Theresa Byrd speaks to the Liberty City Council Aug. 10 about the removal of the Confederate soldier statue in Fairview-New Hope cemeteries. She and several members of the Clay County African American Legacy Inc. spoke in favor of the statue’s removal at city council meetings this month.

LIBERTY — The two Liberty City Council meetings in the month of August had more than 40 people express their opinions about whether the Confederate statue and monument in Fairview-New Hope cemeteries should stay or go.

Arguments began earlier this summer when a Change.org petition started collecting signatures to appeal to Liberty leadership to have the statue removed. Not long after, another petition seeking to keep the monument began circulating.

On Aug. 24, more than 45 people sat in council chambers or the hallway to listen or participate in discussion on the matter. Many of those speaking this week lived outside city limits.

Mayor Lyndell Brenton said the city is still working to determine the city’s legal responsibilities in relation to the statue as well as ownership. City Attorney George Kapke sent a fact-finding letter to the Western District Missouri Division of the United States’ Daughters of the Confederacy.

“There still seems to be people willing to fight a war over an issue that was 155 years ago,” he said. “It’s cowardly to desecrate the marker.”

“It’s not racism, it’s a grave marker,” he said. “My family is willing to go to court over it.”

Pat Gradwohl, a board member of the Clay County Museum, said she is in favor of keeping the marker of history, whether good or bad.

Liberty’s Raymond Downing likened the treatment of Confederate soldiers to what he experienced as a Vietnam veteran being spat on when he returned to California.

“I don’t understand the opposition,” he said. “Regardless of who you fought for, we are all veterans.”

Del Warren, who owns James Country Mercantile with his wife Jean, said if the Confederate statue is removed, there are many Yankee statues around Clay County that would lack an adversary.

Gieselle Fest, who created the initial petition to retain the statue, spoke last. She is also now a member of the Cemetery Committee.

“I would like to challenge people to take their energy and help us work on the cemetery,” she said. “There are history lessons. We need to tell our stories instead of erasing them.”

“Things have meaning,” he said. “While I understand a person has the right to believe as they wish, change is needed to mend some fences and step in the right direction. I remember the signs in the courthouse, ‘Coloreds Only’ or ‘Whites Only.’ Those signs eventually came down.”

“It was during the time of Jim Crow laws and segregation,” he said.

AJ Byrd, president of the Fellowship of the Concerned, said Aug. 10 that the city council should make every effort to remove the statue.

“When many say the Civil War wasn’t about race, the South was built on the backs of slaves. It is celebrating the culture,” she said.

Largest school district in US reopens after delays