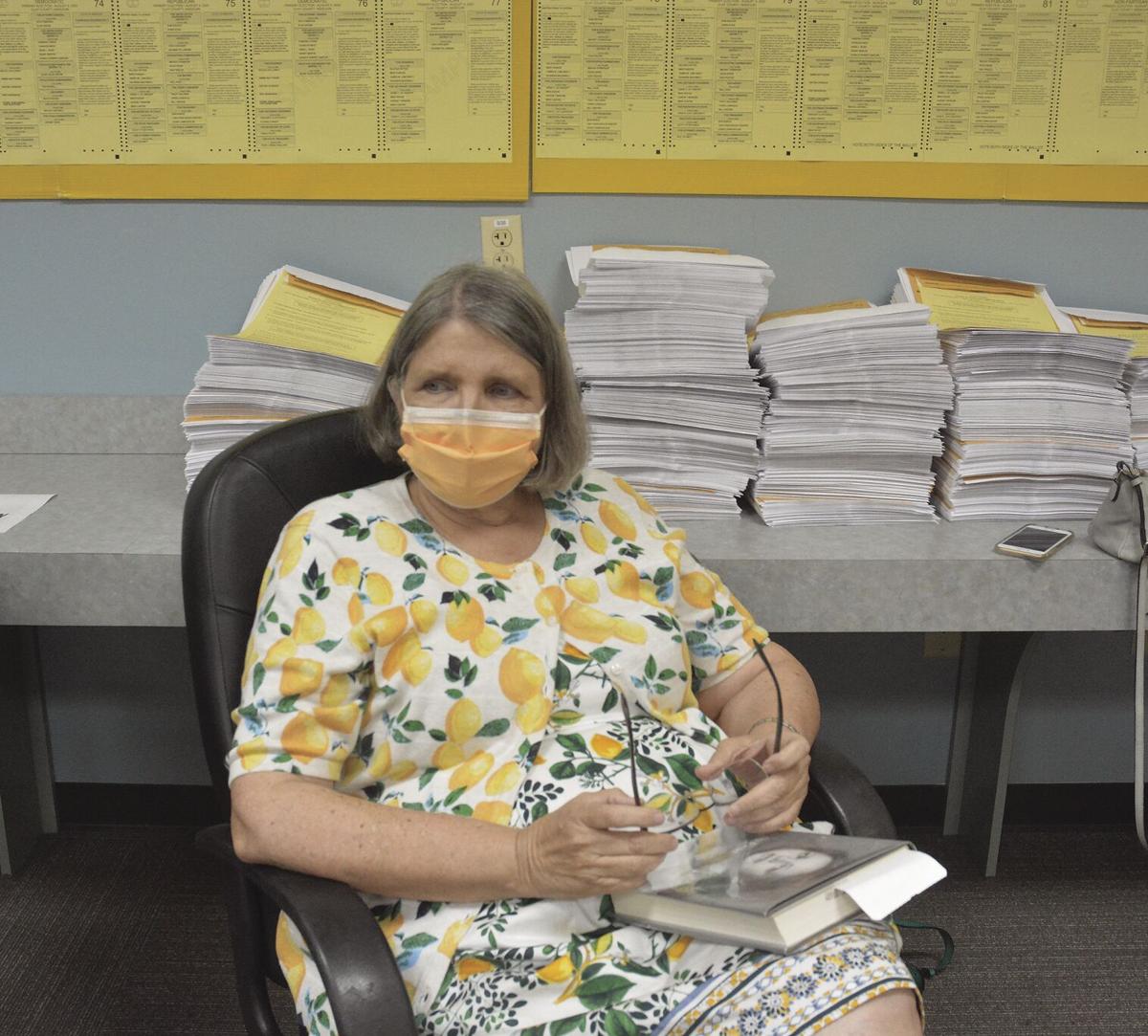 Current Clay County Assessor Cathy Rinehart sits in the counting area Thursday, Aug. 7 with a book as she waits on the recount of the Democratic primary for western commissioner. After results were tallied, they showed Rinehart lost the election by a 10% margin. 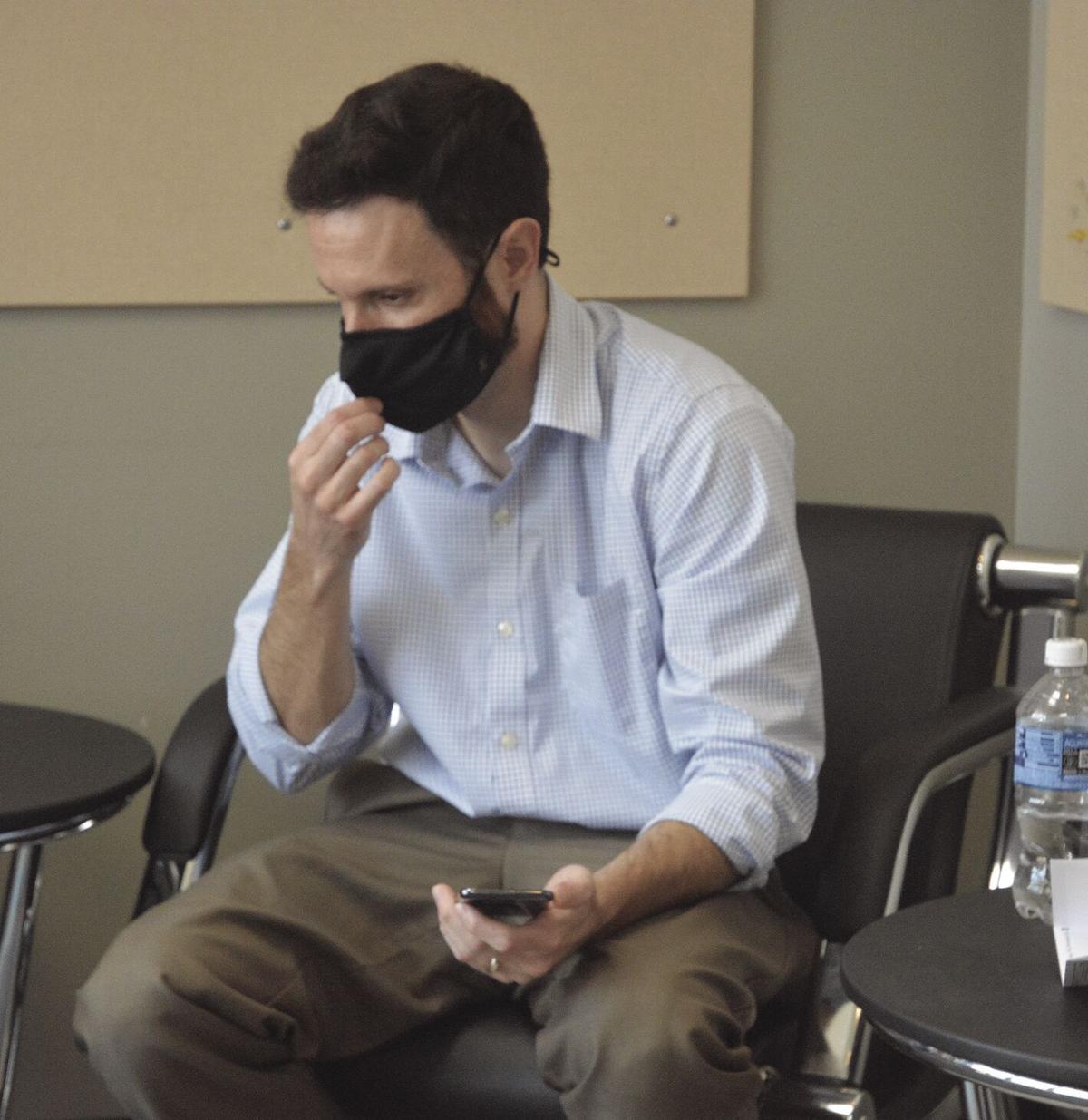 Outgoing state Rep. Jon Carpenter waits and contemplates the returns as he sits in the Clay County Election Board lobby Thursday, Aug. 6. Unofficial verification totals from the recount sent to the Courier-Tribune around midnight Friday, Aug. 7 show Carpenter bested Rinehart, capturing roughly 55% of the votes cast, a total of 6,163 votes, to Rinehart’s 45% or 5,130 votes.

Current Clay County Assessor Cathy Rinehart sits in the counting area Thursday, Aug. 7 with a book as she waits on the recount of the Democratic primary for western commissioner. After results were tallied, they showed Rinehart lost the election by a 10% margin.

Outgoing state Rep. Jon Carpenter waits and contemplates the returns as he sits in the Clay County Election Board lobby Thursday, Aug. 6. Unofficial verification totals from the recount sent to the Courier-Tribune around midnight Friday, Aug. 7 show Carpenter bested Rinehart, capturing roughly 55% of the votes cast, a total of 6,163 votes, to Rinehart’s 45% or 5,130 votes.

CLAY COUNTY — Cathy Rinehart said she is not contesting results of the verification recount that showed her opponent, Jon Carpenter, as the true victor of the Democratic primary for western district county commissioner.

A full verification recount was initiated late last week after election directors discovered a programming error with tabulators that impacted six Democratic races and 21 voting precincts. Races impacted were those for state representative in House districts 16, 17 and 18 and county races for eastern and western district commissioner and sheriff. Precincts impacted included parts of Gallatin, Chouteau and Liberty. The only opposed race in the impacted group was the western commissioner race.

Patty Lamb, Republican director of the election board, said the issue occurred after machines were tested and absentee votes were taken.

“When they went back later to add the audio portion to our handicap-accessible machines, … somehow it flipped the races, but it only affected the six races,” she said. “It only impacted the Democrat ticket so why it didn’t impact everything else, that doesn’t make sense to us.”

Clay County Board of Election Commissioners Chairman Blake Sherer said Adkins, the vendor of the tabulators used in the county, is investigating how the issue occurred and plans to present findings to the commission Sept. 15.

The issue meant Carpenter received zero votes in some precincts and some votes may have been attributed to Rinehart that were not cast for her or in her race. Initial uncertified results posted to the election board website after the Tuesday, Aug. 4 election showed Rinehart, the current county assessor, as victor with 73% of 10,599 votes cast to Carpenter’s nearly 27%, or 2,859 recorded votes.

The margin surprised Carpenter, who has a longstanding network of local support, especially in Gladstone and parts of Kansas City North, thanks to his years of service as House representative in the state’s 15th district. Carpenter is term limited and currently serving his final House term.

“When we were able to see the precinct by precinct numbers, it was pretty clear that something had gone wrong with the vote counting,” Carpenter said.

“I’m just really pleased we were able to get a vote recount so quickly,” Carpenter said after the recount totals were released, adding he appreciated the long hours election board staff put in to ensure the accurate result.

During the recount, Rinehart said she felt the issue may have jeopardized the integrity of the election process. After the recount began, some voters took to social media to question the voting process ahead of the general election in November.

The election authority is the election board for Clay County. Its board of commissioners is made up of two gubernatorially-appointed Democrats and two Republicans.

“Then, the full Senate votes for every member of the board of elections,” said Sherer, adding once approved, election commissioners have the sole responsibility of ensuring the integrity of elections.

Jason Withington, chief petitioner in the state audit of the county, wrote a letter to local state representatives and senators, questioning oversight and the possible need for more of the county election board. In his letter, Withington cited several previous voting errors in the past 20 years that were tied to human error including in August of 2000 when the election board ran out of Republican ballots in 32 of the county’s 69 precincts, in November of 2008 when names of western commissioner candidates were mixed up with eastern commissioner candidates on ballots in one precinct and in November of 2018 when voting machines were allegedly stopped for hours after poll workers did not operate the new machines correctly.

Sherer and Lamb said all previous issues were corrected immediately and have not been repeated. The integrity of this month’s primary, both added, was not at risk because of all of the votes were there and properly counted during the verification process.

“I’ve never really come across any issues where there is corruption or someone needs to be removed,” said Sherer of election oversight, adding he stands on the election board’s record of getting the vote count right.

“Especially in this climate, people need to have confidence in our election process and that we get the vote correct and that everyone has the ability, the right and the access to vote. Clay County Election Board does a fantastic job in ensuring transparency, ensuring a proper vote and ensuring everyone has the right to exercise that right,” the commission chairman said.

The county election board is not alone in having issues through the years. News stories from across the region and nation have reported issues, especially since usage of electronic tabulators have become commonplace.

Lamb said even with the issues the board has had and those with Adkins’ equipment this election cycle, the election authority’s record and the two-plus decades that the board has contracted with Adkins is “pretty good.”

“When you have humans working on stuff, there is going to be mistakes. Election officials, we work long hours, we work hard and we don’t intentionally make mistakes. We are not trying to sabotage anything or trying to do anything wrong. We are trying to do it right. Going forward, the only thing we can do is try to come up with better procedures, better things to look for to make sure these mistakes don’t happen again. ”

While it remains to be determined if the election board will remain with Adkins for future elections, Sherer said the commission is always open to change that is in the best interest of voters.

Now that her race for commissioner is over, Rinehart’s 23-year tenure as county assessor is also over. When asked by the Courier-Tribune what she plans to do next, Rinehart replied, “whatever I want.”Carpenter will now face Republican and current County Collector Lydia McEvoy in the general election.