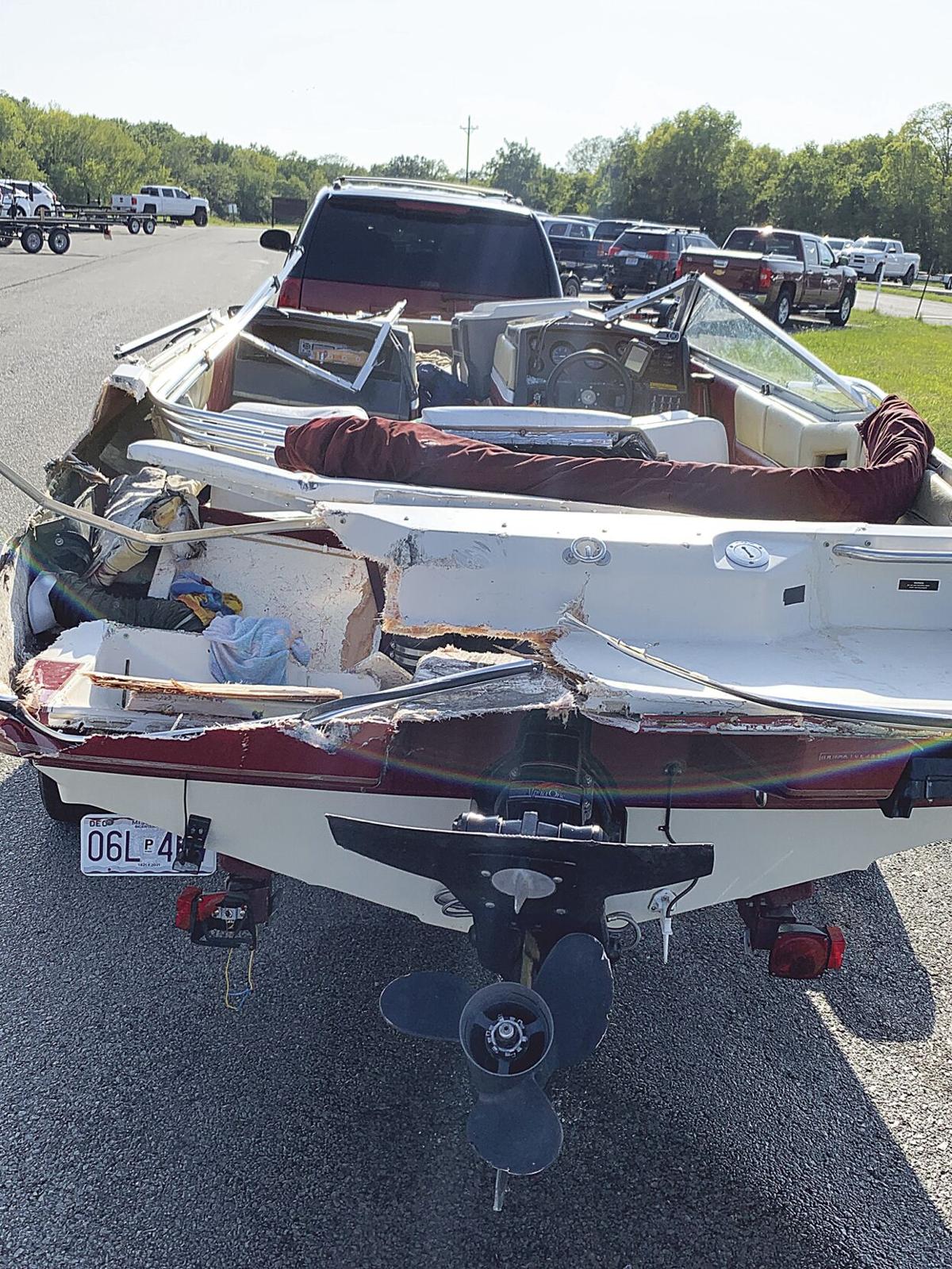 According to the Missouri State Highway Patrol, around 4:05 p.m. Saturday, Aug. 21, this Maxum boat with 10 people on board was hit by another boat, a 2006 Sea Ray, driven by 41-year-old Michael E. Brittain of Kansas City. The boat crash occurred about a half-mile north of the Highway W bridge as the Sea Ray was headed westbound. 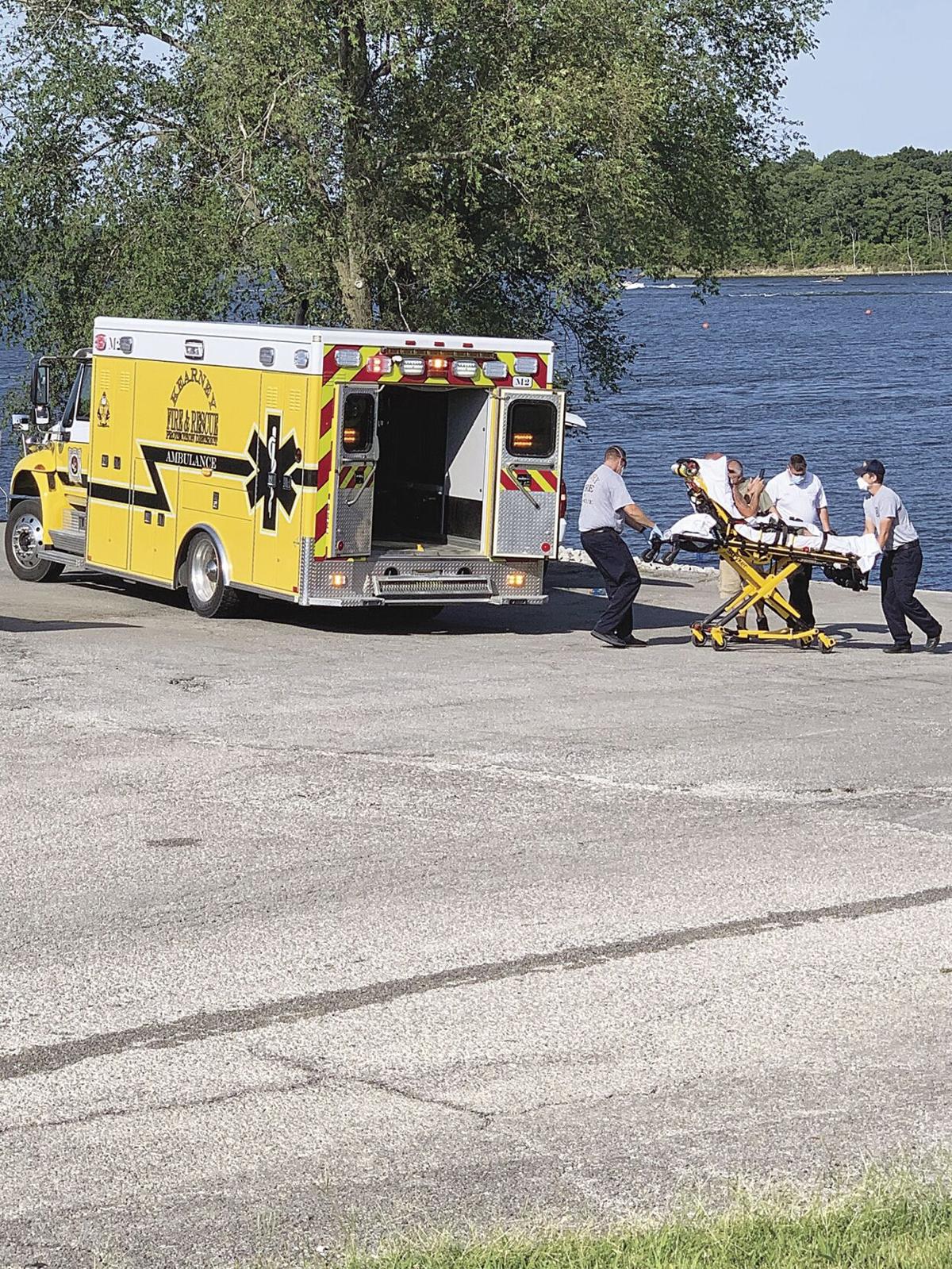 A boat wreck on Smithville Lake resulted in 10 people, both children and adults, being taken to area hospitals for treatment of injuries. 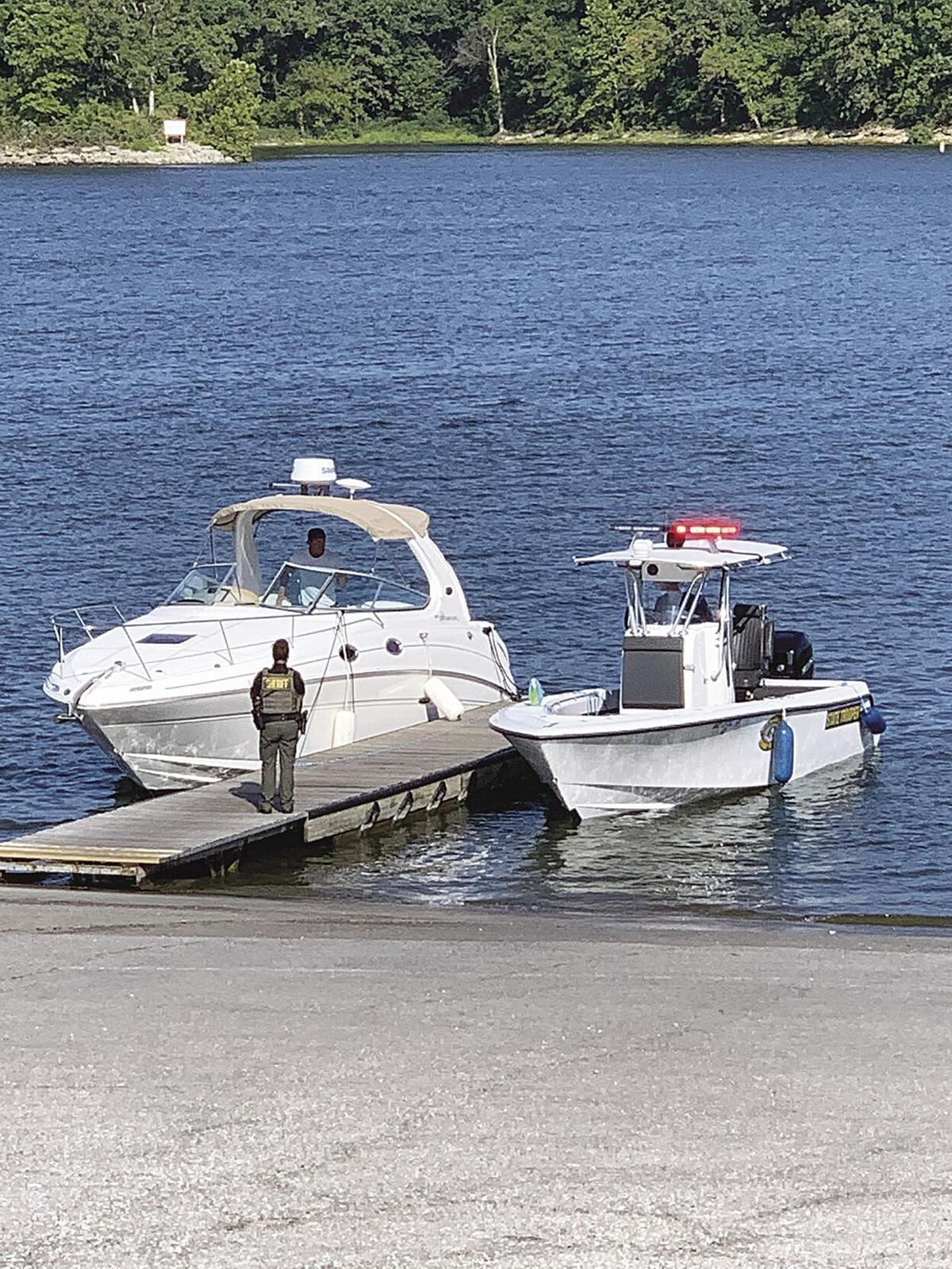 The white Sea Ray pictured here was driven by Michael Brittain of Kansas City at the time of the crash.

According to the Missouri State Highway Patrol, around 4:05 p.m. Saturday, Aug. 21, this Maxum boat with 10 people on board was hit by another boat, a 2006 Sea Ray, driven by 41-year-old Michael E. Brittain of Kansas City. The boat crash occurred about a half-mile north of the Highway W bridge as the Sea Ray was headed westbound.

A boat wreck on Smithville Lake resulted in 10 people, both children and adults, being taken to area hospitals for treatment of injuries.

The white Sea Ray pictured here was driven by Michael Brittain of Kansas City at the time of the crash.

SMITHVILLE — A boat wreck on Smithville Lake has two families fighting to recover and witnesses wondering why more was not done by law enforcement at the time of the crash.

According to a Missouri State Highway Patrol crash report, around 4:05 p.m. Saturday, Aug. 21, a stationary 1990 Maxum boat with 10 people on board was hit by another boat, a 2006 Sea Ray, driven by 41-year-old Michael E. Brittain of Kansas City. The boat crash, according to law enforcement, occurred about a half-mile north of the Missouri Highway W bridge as the Sea Ray was headed westbound.

According to witnesses at the scene, the Sea Ray ran over the Maxum full of passengers from two families and then the driver attempted flee the scene in the Sea Ray with other boats in pursuit.

“There was a lot of conflicting information from those at the scene,” Bell told the Courier-Tribune Tuesday, Aug. 24. “… Initially, we were told from people that they thought a car drove off the bridge and crashed into a boat.”

One witness to the crash spoke with television news reporters, saying those in Brende’s boat looked “helpless” after the crash.

“They were screaming for help,” Jacob Stallman told FOX 4, adding he and a friend called 911 and helped those in the wrecked boat get to safety.

Stallman told TV reporters the driver of the larger boat drove on before coming back.

According to the initial investigation from troopers, Bell said it was determined the smaller boat, the Maxum with 10 occupants, had been moving ahead of the larger Sea Ray through a narrow channel of water that can be full of debris. Bell described the area of the lake where the crash occurred as a “gauntlet.”

“It was determined that the smaller boat was ahead of the larger boat in this channel area and it stopped for whatever reason,” said Bell of the Maxum.

Fellow boater Chris Higbee, a witness and friends of those in the destroyed boat, said the highway patrol crash report, information released to the media and scene investigation got a lot wrong.

“We were all together. It was three boats. It was me in my boat with three of my kids, Ryan had his three kids and his buddy had his four kids (in Brende’s boat). The report said that there was 17-year-old kid, well, there was a 7-year-old boy not a 17-year-old boy. There was only one teenager on his boat. She was the one that jumped for her life off the back,” said Higbee. “The report got a lot wrong. … The 7-year-old boy is Ryan’s boy, his oldest son. Then we had another boat, it was my buddy Nate, and he had his daughter with him.”

Higbee said the crash occurred as the caravan of three boats full of families headed out go tubing in a cove area.

“We all left pretty much in a line, it was really busy that day. We basically go through the area, like it says (in previous Courier-Tribune reporting) called the ‘gauntlet.’ … There’s a bunch of trees that are in the old Trimble Lake area. … You’ve got to be mindful of where you are going. Everybody that knows the lake knows you’ve got to basically go through this area. We were basically heading west, getting ready to head south to go under the W bridge. Well, I started to look behind me because Ryan was the last person and Nate was in front of me with his daughter. When I looked behind me, all I see is white boat hauling ass. The driver of the boat wasn’t even looking (toward us). He was looking toward his left to another boat,” said Higbee, who has been boating on Smithville Lake his entire life.

Sgt. Bell told the Courier-Tribune the collision happened as the larger vessel was coming to plane.

“Why the smaller boat was stationary, we don’t exactly know,” he said.

Bell, who has a long personal history in boating, said larger, cabin vessels like the Sea Ray involved have limited visibility off the bow, making it difficult for an operator, especially one who may not standing, to see blind spots, which can contribute to accidents.

“I don’t know if the driver was standing or sitting, … that’s something the investigation will determine,” said the public information officer. “But, what did kind of catch me off guard was the time of day.

“It was around 4 p.m. … It was the middle of the day,” Bell said, explaining it is more common to see accidents where a boat runs over another vessel occur when visibility is more limited, like at night.

Higbee said highway patrol reports stating the Sea Ray was coming to plane are inaccurate based on what he witnessed.

“He didn’t just get his boat up on a plane. It was already on a plane,” he said. “… Even Joe (Kassanavoid, the patriarch of the second family in the Maxum with the Brende’s), who was in the front of the boat, he put his arms up in the air like ‘Hey, hey, hey.’ Well, the dude, of course, didn’t see him because he wasn’t looking, and struck the boat.”

Higbee said Kassanavoid, located in the front of the Maxum, tried to block his children from the impact of the Sea Ray.

“His daughter that was in the back, which is right where that thing hit if you’ve seen the pictures of the back left corner where the boat is blown up, … that’s where his daughter was. So she jumped for her life,” said Higbee. Heaven, Higbee said, was on the passenger side of the boat and was flung to the other side of damaged boat by the impact of the crash.

“She pretty much took the full force of that boat,” Higbee said, explaining why the Brende mother’s injuries were more serious than others involved in the crash.

Higbee said the Brende’s boat didn’t stand a chance against the Sea Ray.

“You’ve got basically a semi-truck versus a Prius,” he said.

After the impact, Higbee said the Sea Ray operator did flee, dropping off female passengers and beach bags near an area of the lake known as “Party Cove” before returning after being pursued by fellow boaters like himself. Higbee said he called law enforcement immediately and was on the phone with dispatch explaining the situation as it developed, adding he only quit the chase and returned to his friends after law enforcement arrived in a boat and caught up to the Sea Ray.

The Sea Ray was driven from the scene after Brittain was issued a misdemeanor citation for careless and imprudent operation of a vessel.

The injured children were taken by ambulance to Children’s Mercy Hospital. The injured adults were transported to North Kansas City Hospital.

Bell said a boating accident involving this number of injuries and at Smithville Lake is “very rare.”

“This is a once-in-five-years kind of boat crash,” he said, adding boating accidents like this are seen more often at Lake of the Ozarks.

Higbee said the scene investigation left a lot to be desired as it seemed Clay County sheriff’s deputies and the highway patrol — both who responded to the scene — differed in how the investigation should be handled. The witness said he watched as Brittain was seemingly arrested, cuffed and placed in the back of a law enforcement vehicle to later be released with a citation.

After speaking with investigators at the scene, Higbee told the Courier-Tribune Tuesday, he was later contacted by the highway patrol with a trooper telling him the investigation is still ongoing.

As of press time, Brittain could not be reached for comment.

In addition to community members setting up a fundraising account for the family, many from the Smithville Lake boating community reached out to the Brende family on social media to offer messages of support after the crash.

Heaven, who suffered serious injuries, told the Courier-Tribune she was not ready to speak to the media, but that her family was “slowly recovering.”

Bill Clinton walks out of hospital after treatment for infection

A dog fell 40 feet down narrow crevice. Only 1 woman was small enough to save her

A GoFundMe campaign has been set up to assist the Brende family. As of Wednesday, Aug. 25, more than $5,400 of the $10,000 goal has been raised. To donate, search "Help the Brende family recover" at gofundme.com.