Likhit Shankar Gowda, a right-handed batsman for Friends XI, hits the cricket ball during a match July 20 at Stocksdale Park in Liberty. 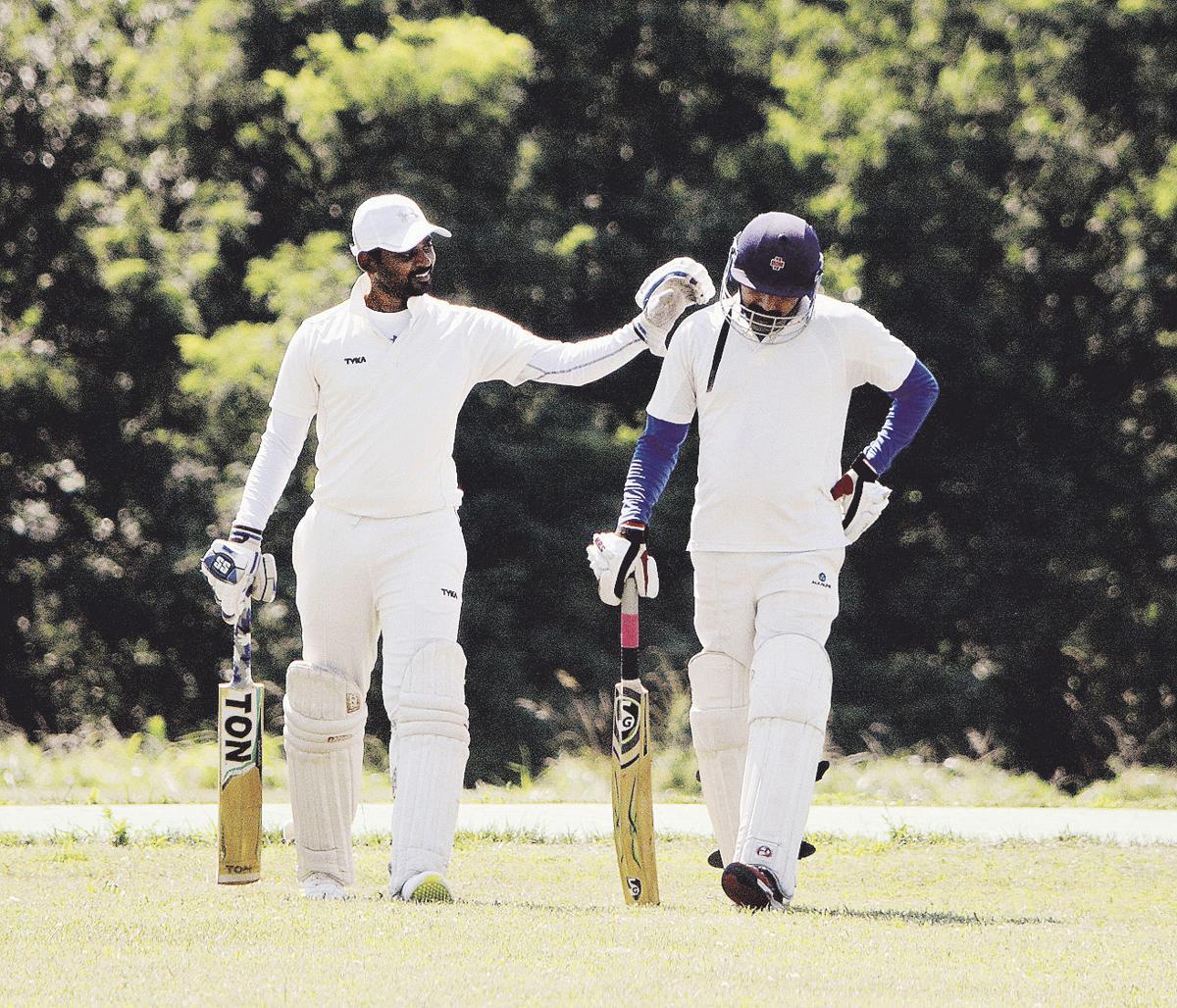 Chanakya G offers a conciliatory pat on the shoulder to teammate Krishna Kumar as the Friends XI get ready to bowl against the Raptors at Stocksdale Park. 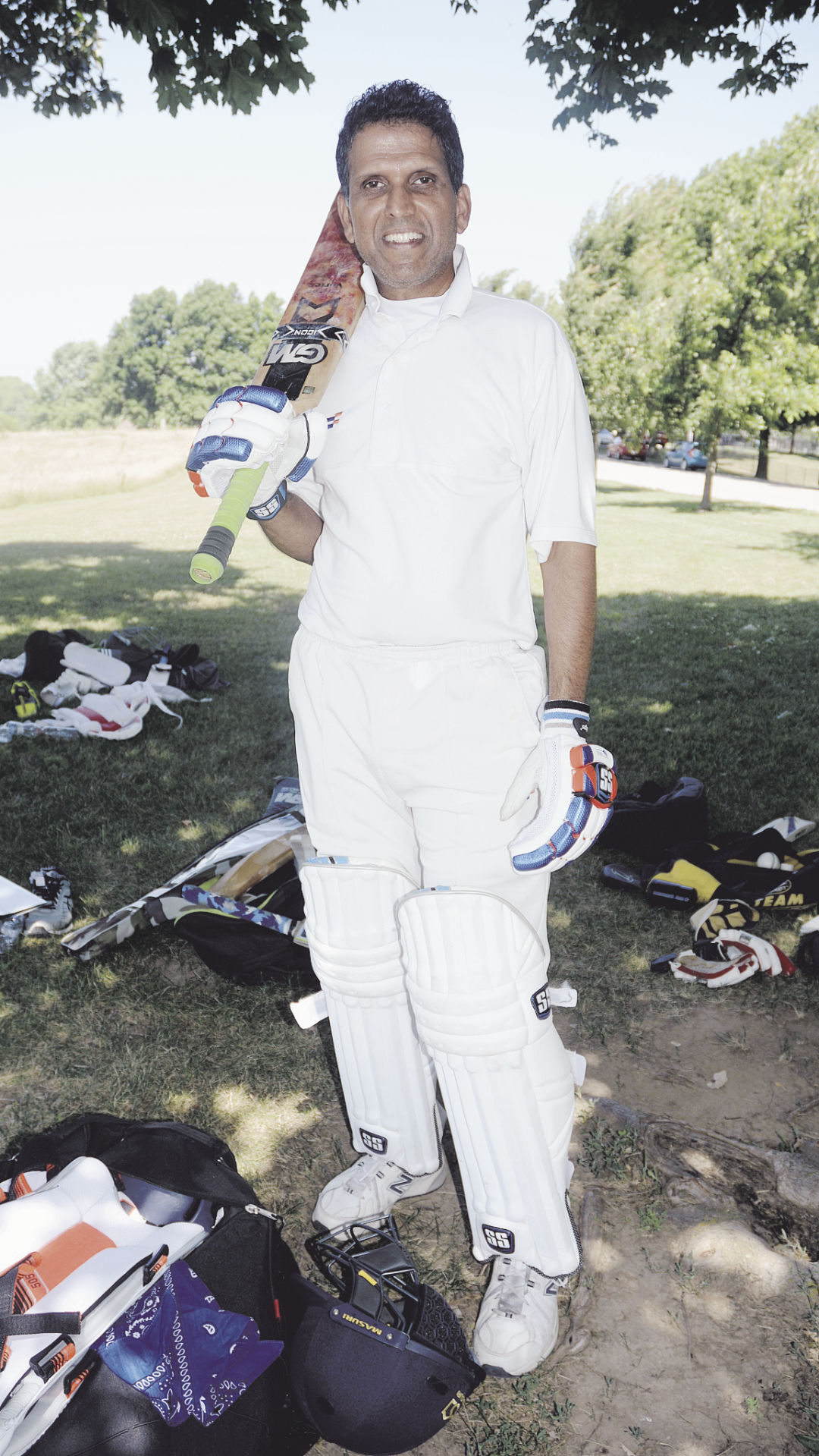 Sudhir Hegde shows the various padding cricket players wear during a game. His helmet is at his feet.

Likhit Shankar Gowda, a right-handed batsman for Friends XI, hits the cricket ball during a match July 20 at Stocksdale Park in Liberty.

Chanakya G offers a conciliatory pat on the shoulder to teammate Krishna Kumar as the Friends XI get ready to bowl against the Raptors at Stocksdale Park.

Sudhir Hegde shows the various padding cricket players wear during a game. His helmet is at his feet.

LIBERTY – Lessons about cricket for Midwesterners often begin with a few comparisons with the American game of baseball.

There’s a ball, white or red depending on the cricket game being played, about the same size and density to a baseball. There’s a pitcher, in cricket known as a bowler. And there’s a batter called a batsman. Additionally, there are uniforms, hearkening to tradition and history most uniforms are white. There also are innings and strikes, ending the similarities there.

In the end, the game of cricket is nothing like American baseball.

At Stocksdale Park, 901 S. La Frenz Road, a cricket pitch is not far from the gravel parking lot. Opened in June 2017, the Midwest Cricket League, welcoming teammates ranging in age from 20s to 50s, plays on Saturdays and Sundays from April to mid-October.

Sudhir Hegde, who plays for Friends XI, offered a sort of cricket 101 as his team battled the KC Raptors on July 20.

“While cricket has a few similarities to baseball, there are lots of differences,” he said. “There is only one strike for a batsman. Once there is a strike, that batsman is done. With the game we play, there are 150 pitches per team.”

Cricket is played with two teams of 11 players each. All the fielding team’s players take the field, along with two from the batting team and two umpires. Played on a grass oval, in the middle is the pitch, a 22-yard strip of concrete painted green. At each end of the pitch stand three wooden stakes, or wickets, with two wooden pieces known a bails balanced on top, giving the look of a small wooden castle.

Fielding team roles roughly mirror the fielding set-up of a baseball team: a bowler; one wicket-keeper standing behind the batsman to receive unstruck balls, like a catcher; and the remaining nine members arrange themselves around the field.

Humorously, Hegde said the teams laugh at highlight reels of the MLB best catches because in cricket players don’t use gloves.Bowlers must deliver the ball with a straight arm. Throwing is not allowed; the bowler must deliver the ball using a windmill action. Then, the ball bounces on the pitch once before reaching the batsman. With no restrictions on batting style, traditionally batsmen stand similarly to batters, only with the bat held at hip-level.

“It’s a bit tough though because the bowler can hit the batsman,” Hegde said. “It’s not like baseball where the batter takes first base, it’s ‘brush it off and keep on playing.’ Cricket is a game of intimidation, strategy and domination. That bowler is hoping that batsman ends up making a mistake and offers up a strike.”

The bowler runs up to one end of the pitch and bowls the ball to the striker, who is standing at the other end guarding his or her stumps. The batsman attempts to hit the ball to a vacant area anywhere in the 360 degrees of the field to score runs.

If the batsman hits the ball both batsmen may, but are not obliged to run from their end of the pitch to the other, passing by each other as they go. The bowler then changes sides.

Games comprise of at least one inning. They call one team batting an inning, and then there is a break of 15 to 30 minutes. When the other team bats, that is another inning.

“When most of us bat, we wear padding and gloves,” he said. “I also wear a helmet. Some of the players don’t.”The game between the Raptors and Friends XI lasted about four hours, with the Raptors eventually claiming victory.

“Most of us just love the game,” he said. “Most of the nations that were British colonies play cricket because the English played first. We all appreciate the Liberty Parks Department for building a pitch and giving us time to play. With the number of teams, we needed another space and Liberty has been most accommodating.”

Since innings are different in cricket compared to baseball, scoring is done differently too.