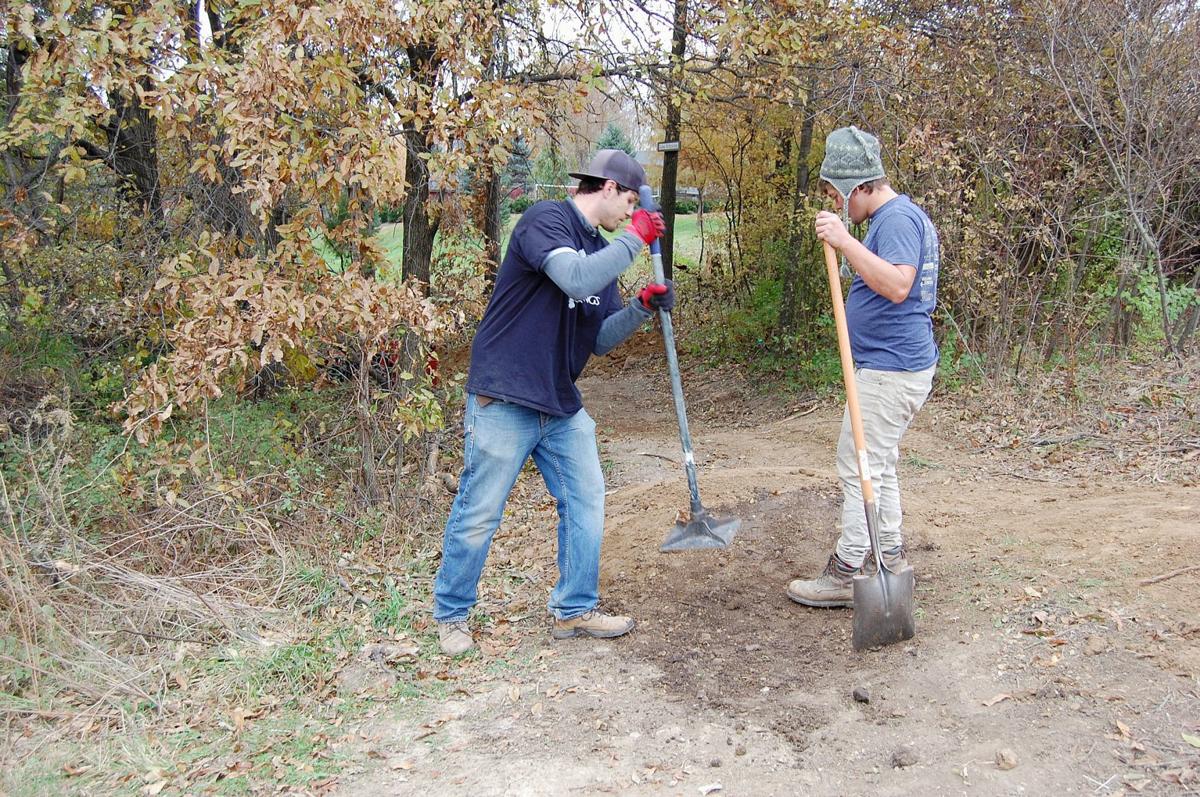 Volunteer Andrew Brown, an experienced mountain biker and competitor, tamps down earth on one of the flow track hills in Stocksdale Park in Liberty. Brett Shoffner, another rider and the owner of Ecological Placemakers, helps out. 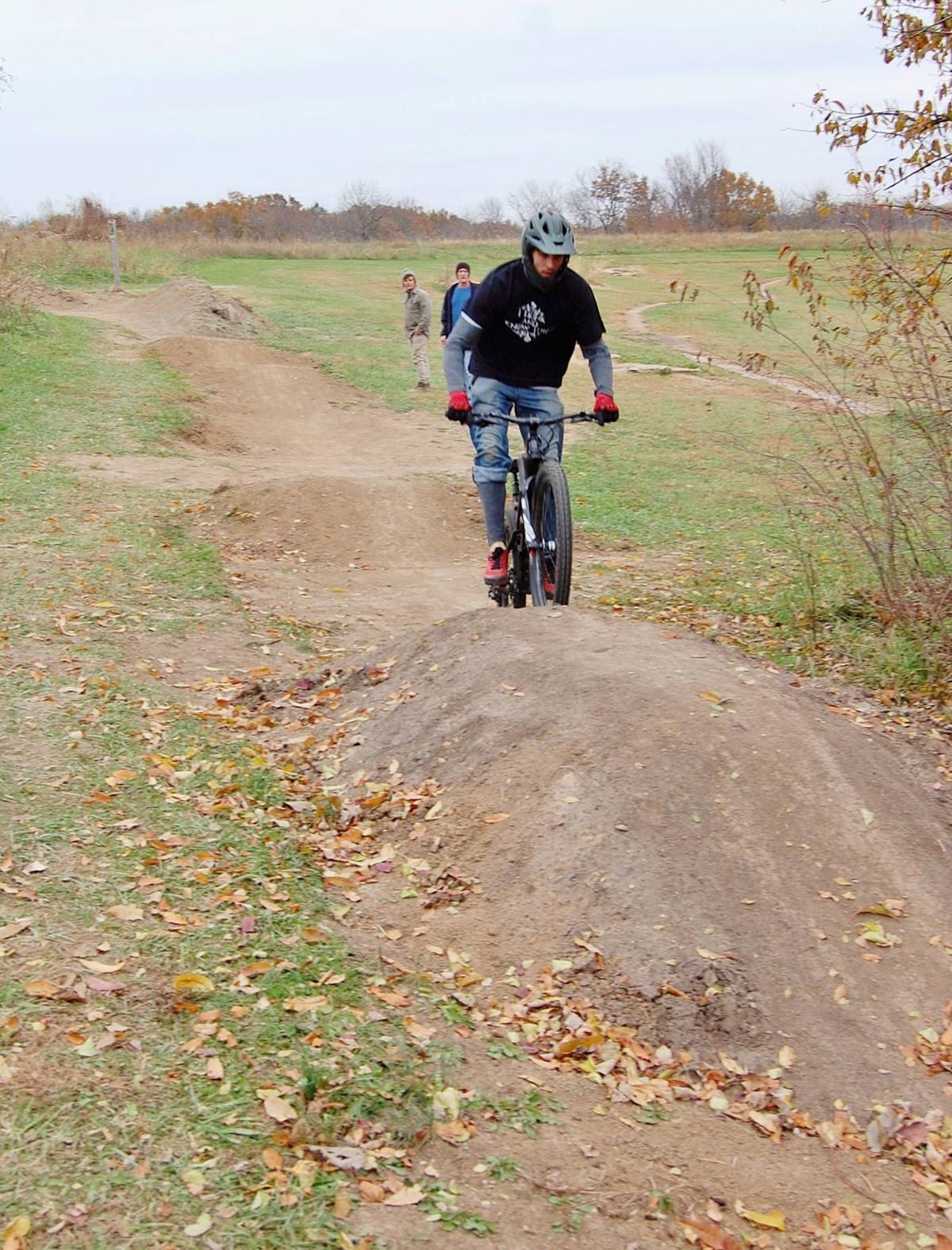 Mountain bike rider Andrew Brown demonstrates moving up and down the various elements that are part of the growing flow track at Stocksdale Park in Liberty.

Volunteer Andrew Brown, an experienced mountain biker and competitor, tamps down earth on one of the flow track hills in Stocksdale Park in Liberty. Brett Shoffner, another rider and the owner of Ecological Placemakers, helps out.

Mountain bike rider Andrew Brown demonstrates moving up and down the various elements that are part of the growing flow track at Stocksdale Park in Liberty.

LIBERTY — According to the International Mountain Bicycling Association, as the sport of mountain biking has evolved over the past few decades, it has driven the development of a new style of trail with features and concepts that push the limits of traditional single tracks. An increasing number of public land agencies, ski areas and communities now embrace the importance of trails built specifically for mountain bikes — trails that flow.

In Liberty, the flow track at Stocksdale Park, 901 S. La Frenz Road, continues to take shape, thanks to the efforts of many volunteers who are also members of the Urban Trail Co. and the Earthriders Mountain Bike Club. The group has been led by Clay Lozier, a city parks board member, avid biker, and trails and parks advocate.

At Stocksdale Park, volunteers work on adding cool features around the park. The volunteers such as Andrew Brown came out with his dog Xena to create different features along the trail.

All trails have some sort of rhythm, and mountain bikers call that the flow, Brown said.

Brett Shoffner, another rider, owns his own company called Ecological Placemakers and has helped with the single-track trails, the pump track and now the flow track.

“Technically, it’s all downhill, so people really should be pedaling,” he said. “You move differently than just pedaling. It’s far more an anaerobic exercise than aerobic.”

“You build up speed and maintain that rolling up and down terrain and jumps,” Brown said.

Shoffner said the track will stabilize some, especially as grass grows around the jumps and hills.

“Kids can ride this trail,” Lozier said. “They can come out with their parents for more leisurely rides or, as they grow, they can develop some speed and add those jumps. I would say you could have a 4-year-old rider out here to those more veteran ones.”

There are rollers and berm turns but if kids don’t want to attempt these, the path is wide enough to go around.

“It really is a different amenity for the park,” Lozier said. “It will bring people in from all over Kansas City. I could even see some folks from St. Louis who are avid riders to visit. That means they get rooms here and buy meals, adding to the local economy. They can make a weekend of it.”

Lozier expects more features to be added. Initially, the city of Liberty’s Parks Foundation gave a $2,000 donation, which was matched by Urban Trails. Shoffner’s company gives a discount for services and the rest is handled through volunteer labor, plus they have had help from Liberty Plumbing with the use of a Bobcat for ground work.

“When the ground becomes frozen, we’ll hang up the work and continue in the spring,” he said.

The volunteers work between October and April, trying to get off the course during the peak riding season.

Lozier lobbied the Missouri Department of Conservation to be able to extend the trails through the adjacent conservation land east of the park in conjunction with the Walnut Woods Conservation area. The single-track trails now exceed more than 6 miles.

“Our trails are used almost all year long,” he said. “I love the trail runners and the dog walkers, too. Simply put, this is a great amenity for Liberty. This flow track will be a place where people can have fun, especially as the word gets out more and more.”