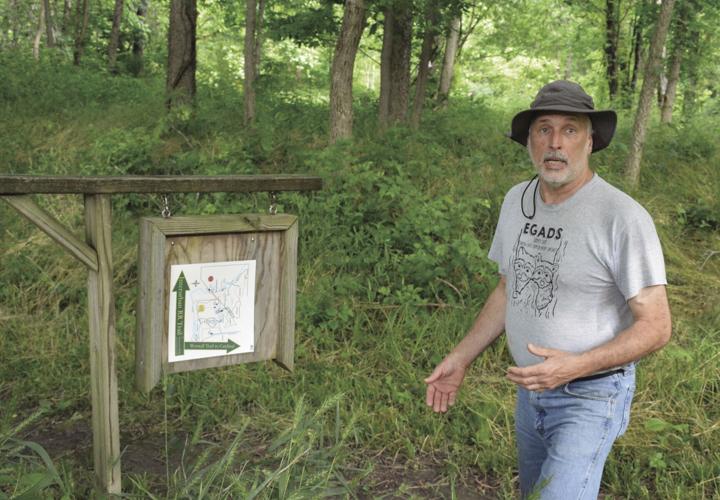 Martha Lafite Thompson Nature Sanctuary Executive Director Michael Sandy explains how much of the work accomplished at the natural area in northern Liberty is done by volunteers. 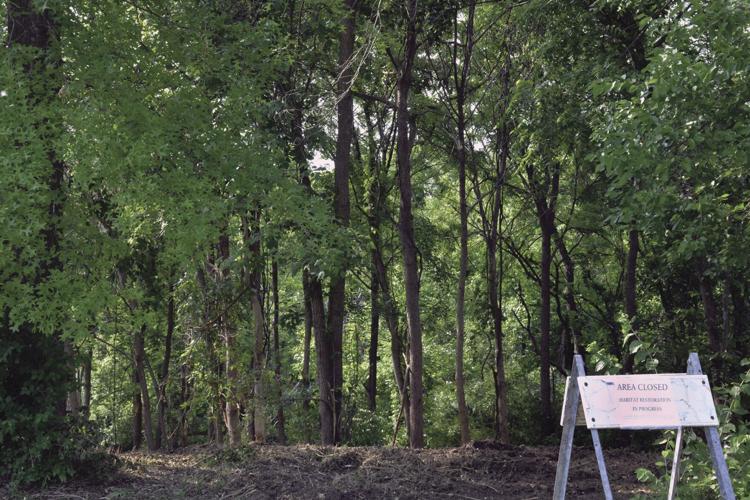 Martha Lafite Thompson Nature Sanctuary Executive Director Michael Sandy explains how much of the work accomplished at the natural area in northern Liberty is done by volunteers.

LIBERTY — For visitors to Martha Lafite Thompson Nature Sanctuary, 407 N. La Frenz Road, a restricted work area may be concerning for some, but for Executive Director Michael Sandy, it’s a win.

“We are clearing out invasive honeysuckle bushes,” he explained of the Liberty nature area. “The goal is to allow Missouri’s native habitat to return and not the bush and vine honeysuckle.”

Sandy said bush honeysuckle offers no real benefit. According to the Missouri Department of Conservation, bush honeysuckles form a thick understory, limiting how much sunlight reaches the seedlings of native plants and thus inhibits growth of new plants. They also compete with native plants for moisture and nutrients in the soil, which leads to erosion. All bush honeysuckles spread from the roots, allowing them to further dominate an area.

“There is a significant ripple effect to these invasive bushes,” he said. “First, very few things will find shelter under them and that’s rodents. Mice and rats carry fleas and ticks. When the honeysuckle is removed, the hawks and owls can do a better job controlling this population.”

When Martha Lafite Thompson sought to make the nature preserve, she wanted as natural a setting as possible. Therefore, the areas that are mowed are about 12 inches on either side of the walking paths. Everything else is designed for animals and native plants, meaning it may at times look wild and unkempt to some, the director said.

“Maintenance is task around here,” Sandy said, speaking about the 100-acre sanctuary. “The public walking areas are maintained as is the picnic area, along with the children’s garden and around the compost pile. We have a significant prairie, which is what Missouri mainly has been, and then the grasses, including poison ivy.”

Sandy explained that poison ivy falls as a native forb or broadleaf plant. Several mammals like poison ivy including deer, the director said. Birds like the berries.

“The rules at the sanctuary are fairly straightforward,” he said. “It’s a wildlife sanctuary so the idea is that the land is for the animals and we are guests. No bikes or pets are allowed. If you come to picnic here, there are no trash cans. That has saved us $15,000 a year.”

The other big rule is not to pick to the flowers. The sanctuary has a couple butterfly gardens, which are planted to help the endangered winged creatures. Sandy said he wants the community to look with their eyes, binoculars and cameras, not their fingers.

“Along with the paths cleared, I look at trees in the sanctuary,” he said. “I look at whether a tree that is dying or needs to be felled for safety away from the path and people. If the tree falls in a place that will benefit the habit not hinder maintenance and is a value to the wildlife, I often leave that tree. It’s a case-by-case scenario if a tree needs to be removed.”

During the past few years, the nature sanctuary has taken a hit financially. When the housing bubble burst in 2008 school districts dealt with strained finances and slowing funds. Property, income, and sales tax revenue were all hurt by the bursting of the housing bubble. Sandy said schools didn’t send classes out to the sanctuary for school programs. Then COVID-19 hit and everything shut down, he said. Now more than ever, Sandy is relying on grants, donations, memberships and volunteers.

“The sanctuary is blessed to have so many groups help out with projects here,” he said. “There are master gardeners and naturalists to help with the maintenance of the gardens. The East Clay Rotary has given funds as well as work hours. Then there are the scouting groups and school groups from Liberty Schools such as the Key Club, A-Plus and National Honor Society.”

© 2016 NEWS-PRESS & GAZETTE COMPANY
Powered by BLOX Content Management System from TownNews.com.
Our new eEdition is too good to keep to ourselves.