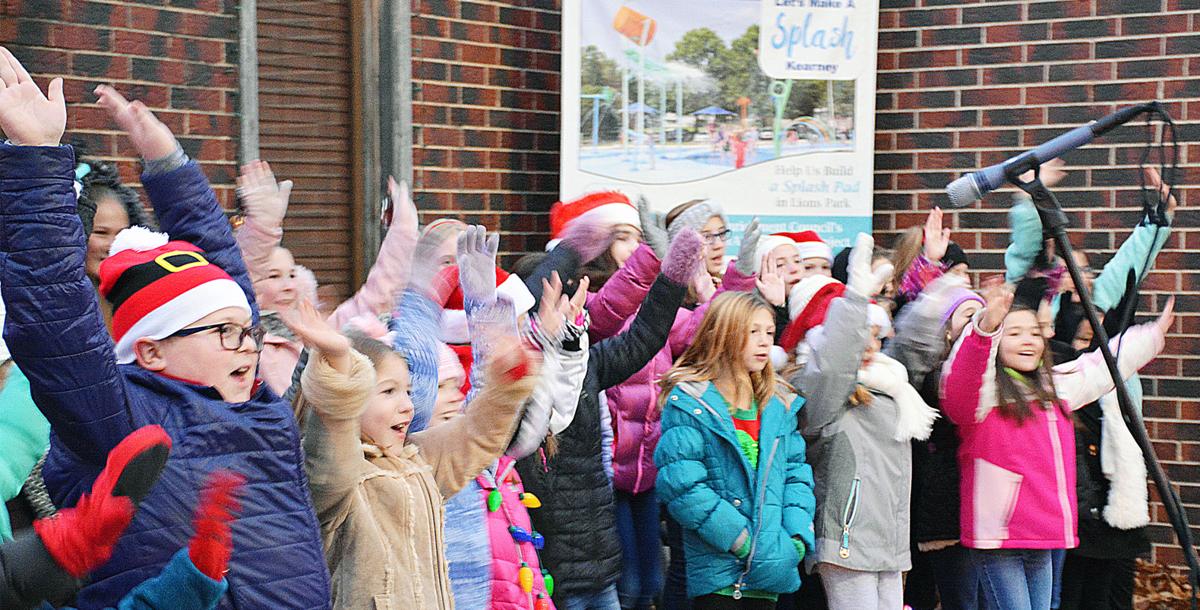 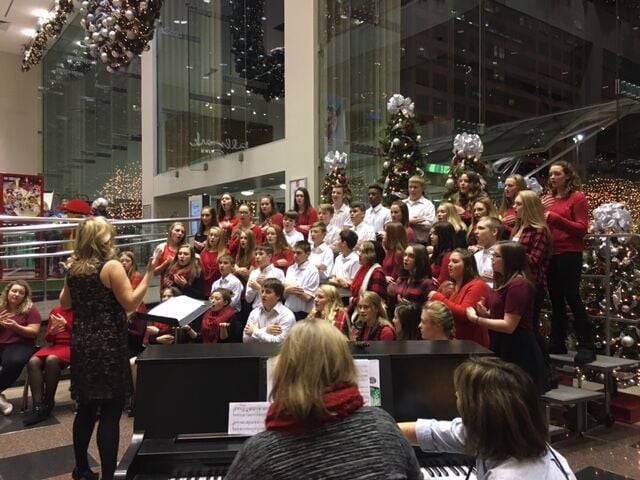 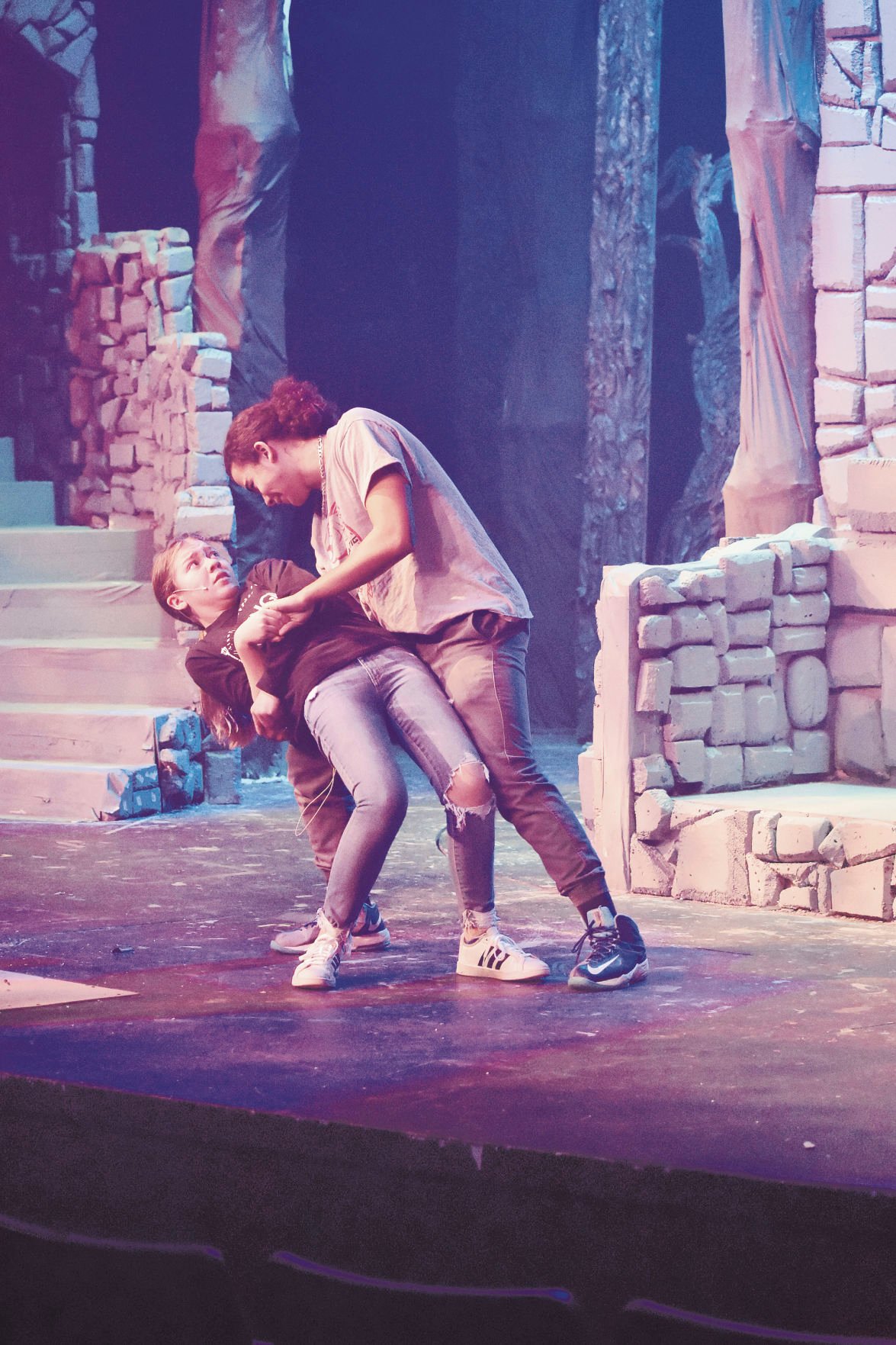 In addition to band and choir, students in theater put their musical talents and education to use. Here, Jayden Hayes, playing Wolf, approaches Madeline Belcher, playing Little Red Riding Hood, in the 2019 Liberty High School musical, “Into the Woods.” 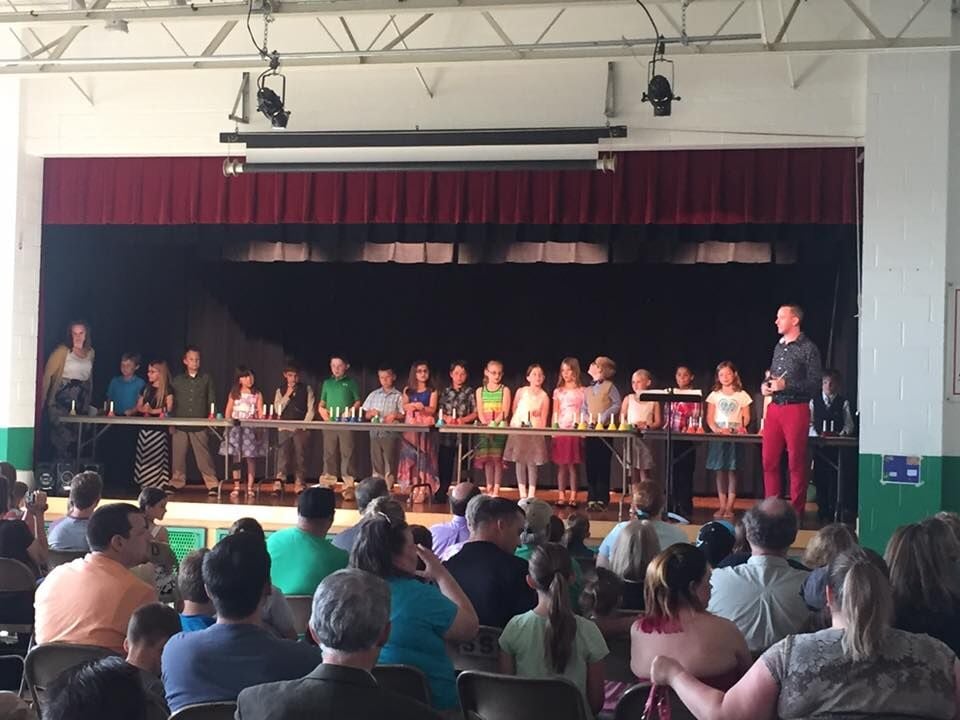 Smithville music teacher Justin Orscheln leads his elementary music students in a performance using colorful bells. Orscheln said his district, like others, celebrates music all the time, not just on Kids Music Day on Oct. 2.

In addition to band and choir, students in theater put their musical talents and education to use. Here, Jayden Hayes, playing Wolf, approaches Madeline Belcher, playing Little Red Riding Hood, in the 2019 Liberty High School musical, “Into the Woods.”

Smithville music teacher Justin Orscheln leads his elementary music students in a performance using colorful bells. Orscheln said his district, like others, celebrates music all the time, not just on Kids Music Day on Oct. 2.

According to Northland teachers, music in education is a big deal as it helps students learn to trust and be supportive of a team. It is also shown to have a positive impact on learning in other areas.

“Typically, what we do is celebrate Music in our Schools Month, which is in March,” Orscheln said. “Something that I’ve done, and keep in mind I’m teaching (kindergarten through sixth grade), is we do a March Madness bracket on a big bulletin board in my hallway.”

Orscheln said the effort involves the whole school. Students compete by singing one of two national anthems and the student body votes until they can narrow it down to a final winner.

Liberty Fine Arts Director Aaron Money said music is even part of ongoing virtual learning in light of the pandemic.

“We are just trying to make sure all of our students have access to the arts,” he said. “If they are (virtually learning,) we are giving them independent study. That means they are working with a secondary teacher on either band, orchestra or choir. As far as (strings) for fifth grade, we are offering those classes up for virtual students to still be able to come in and work through that.”

“Music makes the world a better place,” Kearney High School band teacher Chris Heil said. “It’s a lifelong activity. There are adults in community groups who may be doctors or lawyers, but they join together because they love music.”

“... Music really does bring an opportunity for everyone to come to the table,” Oscheln added. “We tell people that anybody can be a singer, anybody can be an instrumentalist; you’ve just got to be able to put in the hard work.”

Heil said with music education, students are exposed to a synthesis of concepts.

“We are also strengthening soft skills that today’s employers are looking for such as teamwork, problem solving, adaptability, creativity and resourcefulness.”

Studies show students who participate in music perform better in other classes, Smithville Middle School music teacher Angela Viebrock said, adding music creates an opportunity to connect multiple parts of the body and use different areas of the brain.

“We talk about in my class that when they’re seeing and performing a song, and especially if we do choreography, that they’re connecting every aspect of their body when they’re singing,” Viebrock said. “They’re using their voice and decoding the music into notes, then doing it physically. Then, if we’re (performing) in a foreign language, that’s sparking another part of their brain.”

Viebrock said music can also change a person’s day. Her students are learning Stevie Wonder’s “Don’t You Worry ‘Bout a Thing,” she said, adding they tell her the song makes them feel better.

“It is a stress reliever,” Viebrock said of music. “... It can turn your whole day around.”

“Not one of (my band students) has ever been sorry to be in band,” Heil added. “Most of them talk about band becoming their family and that accepting group they needed.”

If you can bring music into a child’s life, Money said, it creates a well-rounded student.

When it comes to advice for adults, local music educators suggest starting children early in music education. Another tip, do not be afraid of one’s ability.

Each year, Keep Music Alive, a non-profit organization dedicated to music education, partners with schools, music stores and other music organizations around the world to hold special events that benefit and celebrate children playing music, a press release states.

This year, Matthew Morrison serves as official spokesperson for the celebration. Morrison is best known for his roles in "Hairspray," "Glee," "The Light in the Piazza," and "Finding Neverland."

Due to the ongoing pandemic, virtual events and promotions for Kids Music Day will include live-streamed performancies and open mics for kids, free online lessons, virtual instrument show and tell and online instrument clinics.

"This year has presented many challenges and I'm very thankful for music and it's ability to bring positivity to my family's life," Morrison said. "I know firsthand just how valuable an introduction to the arts can be and because of that, I'm here to support my friends at Keep Music Alive to celebrate Kids Music Day. Our hope is to encourage kids and their parents to tap into the arts to find the relief, joy and inspiration that playing music can offer."

To get involved, visit www.kidsmusicday.org on Oct. 2.