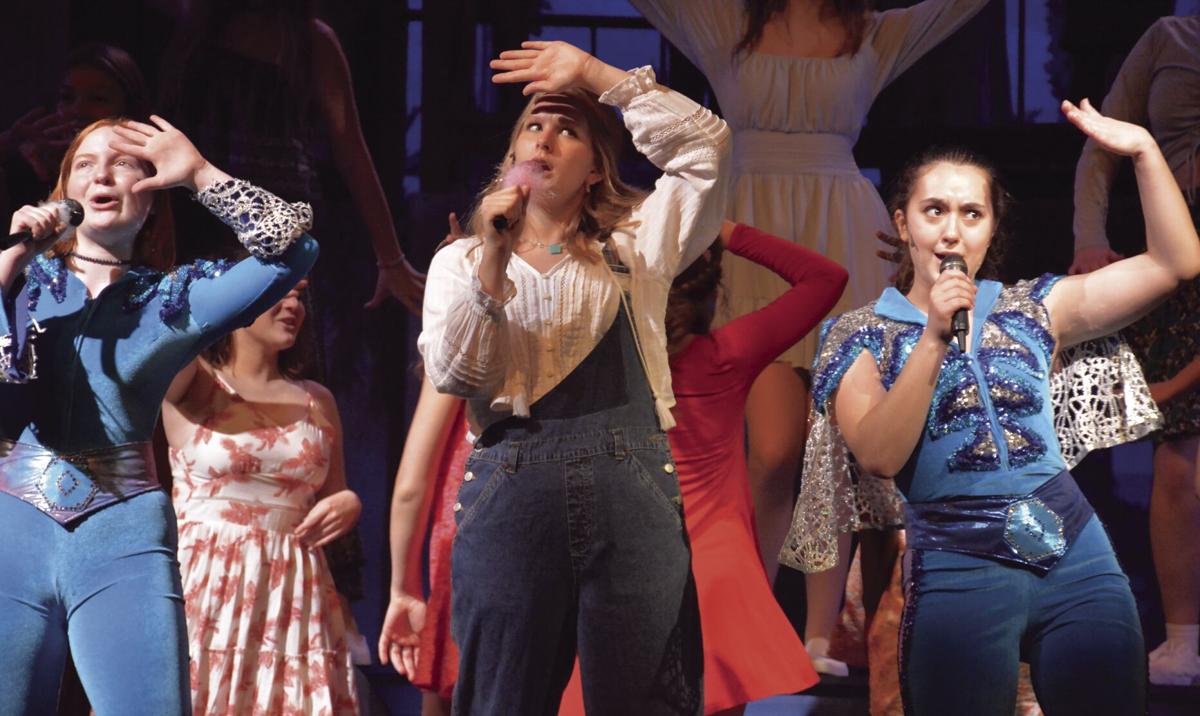 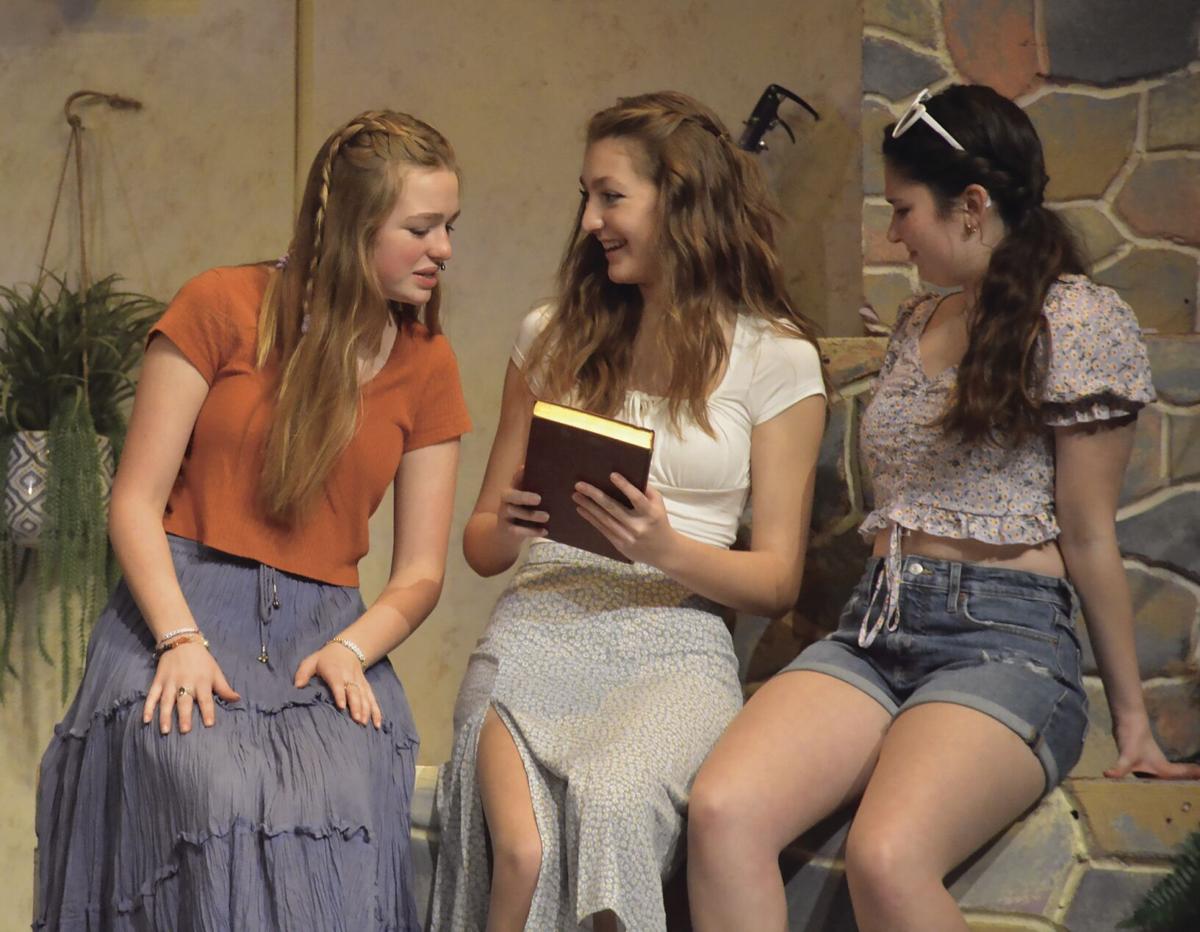 Bellamy Brockman, who plays Sophie, center, talks with her best friends, played by Ava Powers and Reagan Schwalm, about her mother's teenage diary and her possible fathers in Liberty North's performance of "Mamma Mia!" 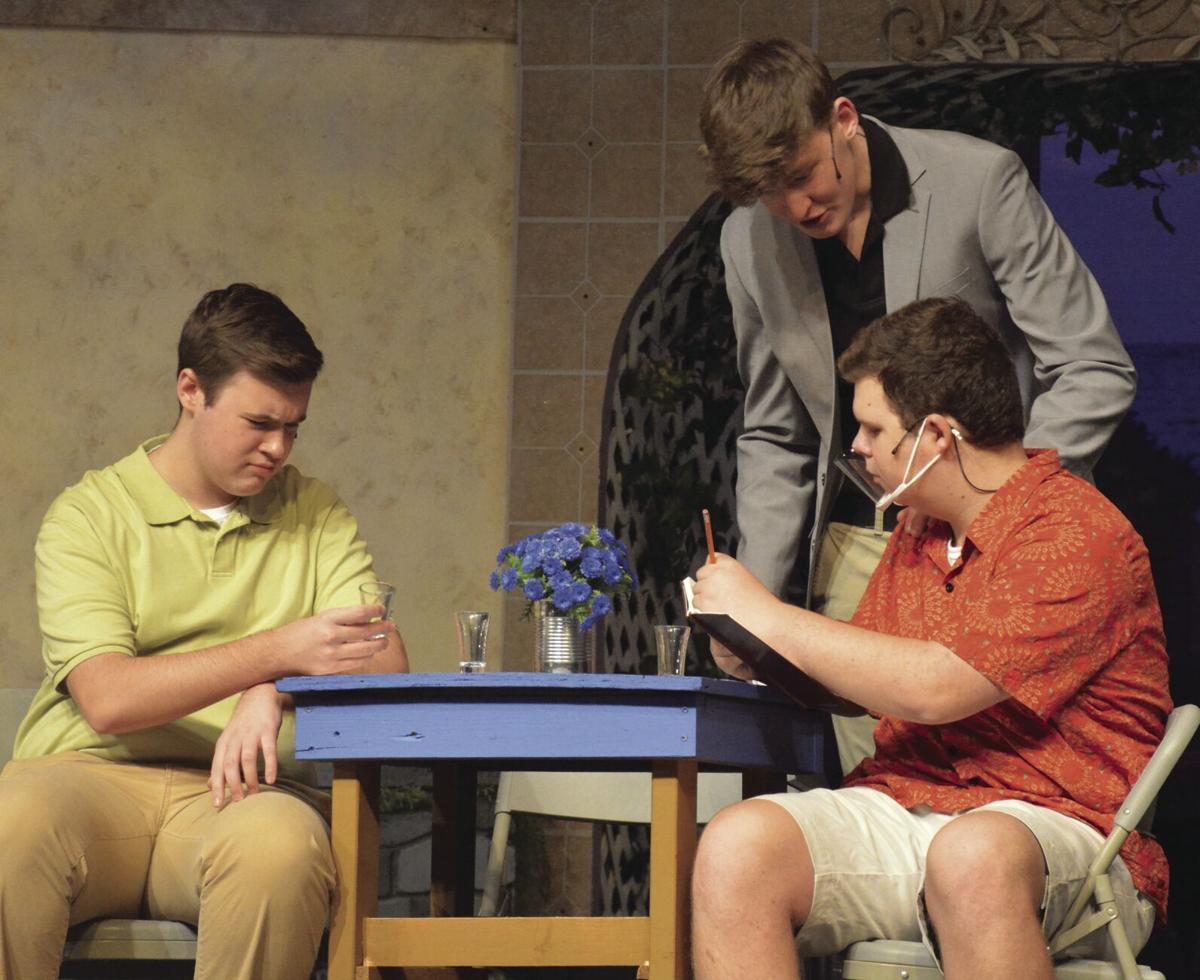 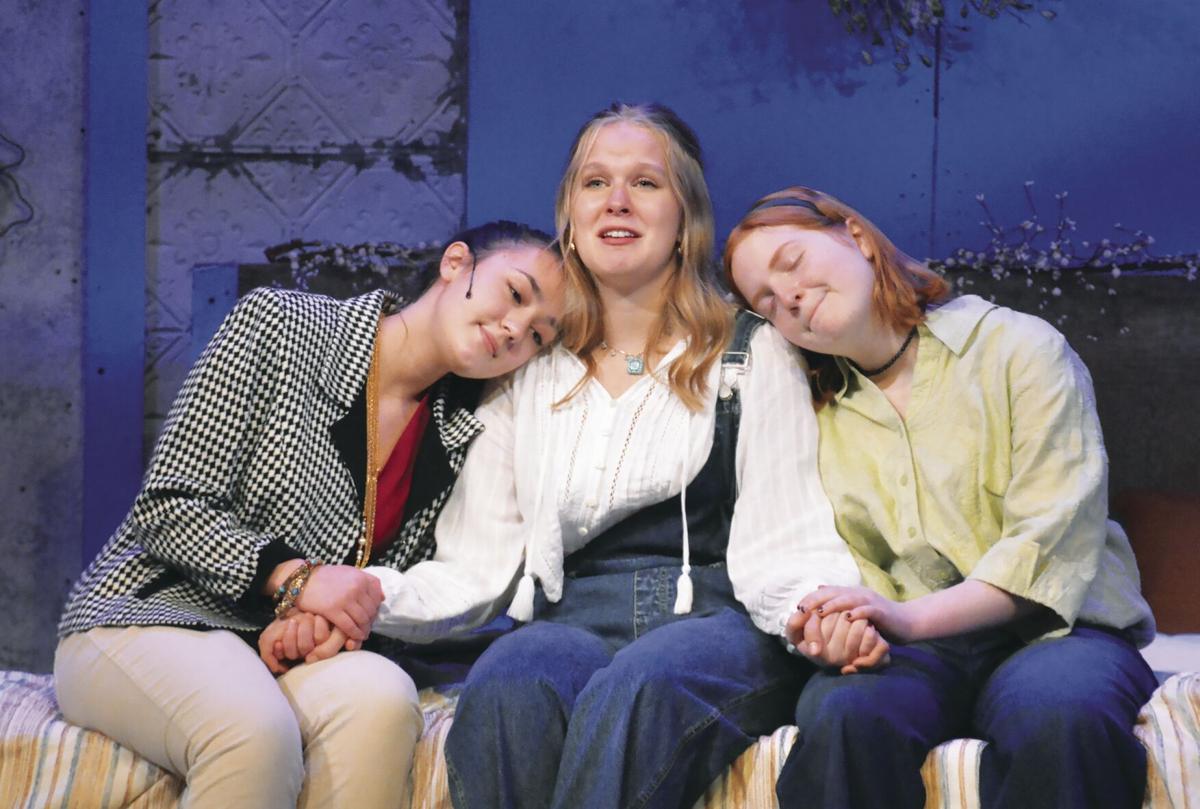 Donna Sheridan and the Dynamos are back together. The best friends are Tanya, played by Lily Weaver; Donna, played by Georgia Barge; and Rosie, played by Ava Wolesky. 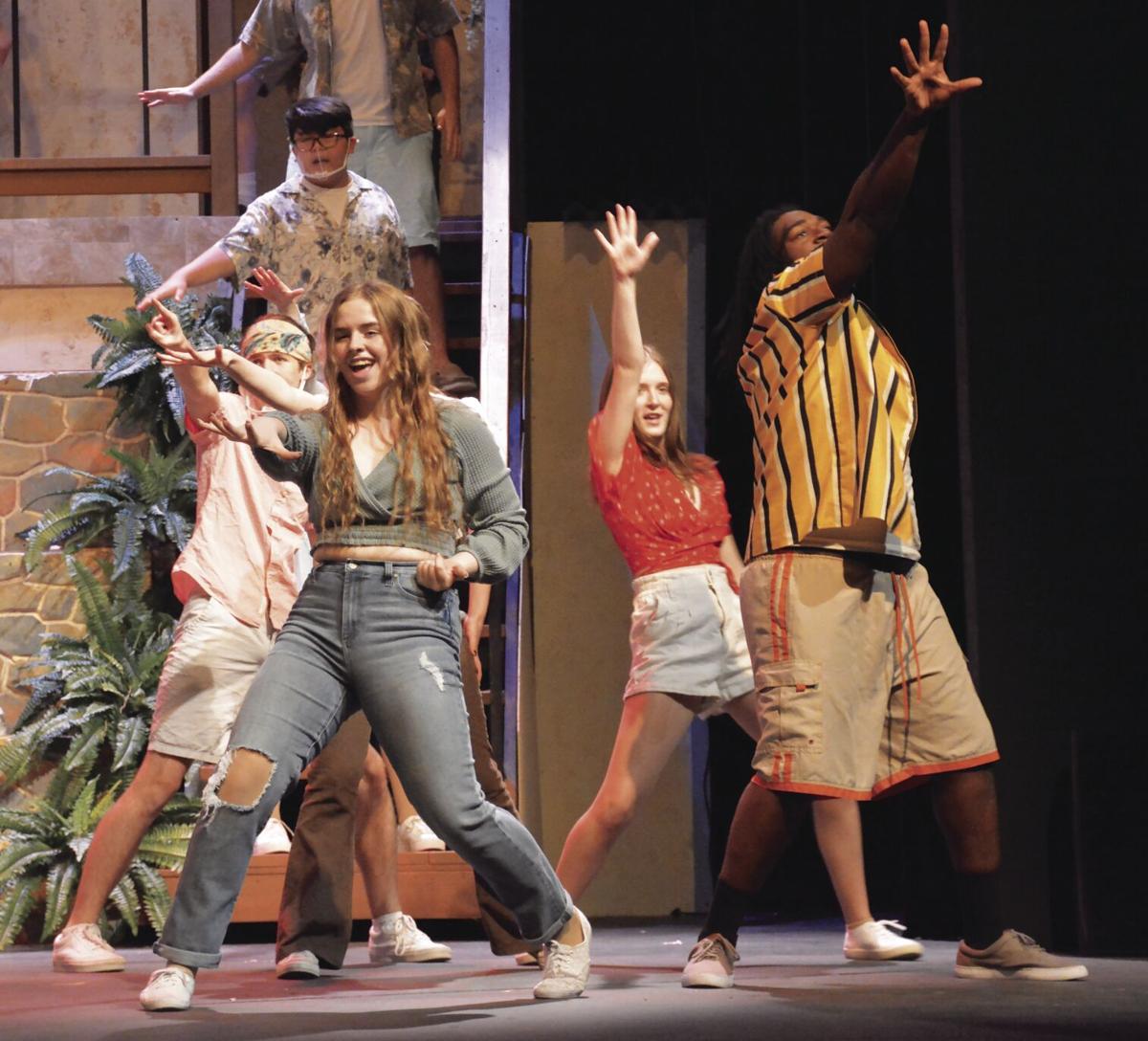 Theresa Sudholt, in the jeans, not only performs as part of the ensemble, she is serving as dance captain and props master for Liberty North's production of "Mamma Mia!"

Bellamy Brockman, who plays Sophie, center, talks with her best friends, played by Ava Powers and Reagan Schwalm, about her mother's teenage diary and her possible fathers in Liberty North's performance of "Mamma Mia!"

Donna Sheridan and the Dynamos are back together. The best friends are Tanya, played by Lily Weaver; Donna, played by Georgia Barge; and Rosie, played by Ava Wolesky.

Theresa Sudholt, in the jeans, not only performs as part of the ensemble, she is serving as dance captain and props master for Liberty North's production of "Mamma Mia!"

LIBERTY — This Thursday through Saturday, temperatures are going to start dipping into the 40s, but if anyone is looking to keep a warm mindset, look no further than Liberty North High School’s production of “Mamma Mia!”

Wrapped with the hits of ABBA, the musical tells the story of a young woman’s search for her father while her mother manages a small Greek island resort, all while trying to give her daughter a lovely wedding.

Senior Georgia Barge plays Donna Sheridan, the proprietor of the resort and mother to Sophie, played by Bellamy Brockman.

“This is a blast,” Barge said. “The music is so much fun. My co-leads are some of my best friends. There are a lot of juniors and seniors in the show so we are capturing all the moments we can. Plus, I like ABBA’s music. I know it’s a jukebox musical, but we are making it our own.”

The term “jukebox musical” relates to the use of previous pop culture hits, but does not focus around the life of an artist or group.

Over the weekend, Liberty North theater students rehearse "Mamma Mia." Look for a story in this week's paper. pic.twitter.com/kWCcV0Zv1M

Barge said her favorite song to sing is “Winner Takes It All,” which she describes as her character’s heartache song to her former lover.

“I feel like Donna is going to set love aside for her daughter and she is making that decision herself,” she said.

Her counterparts in the former girl group, Tanya and Rosie, are played by Lily Weaver and Ava Wolesky, both seniors. In the musical, the three friends attended college together and then formed Donna and the Dynamos.

“I play Tanya, the divorcee,” Weaver said. “I’m truly having a blast and I’m so excited to have an audience to see this. When we knew about the musical choice, I listened to the soundtrack. I love it. Right now, it doesn’t feel like work. I’ve never enjoyed the dancing, but this is a good time.”

Her favorite song to sing is “Does Your Mother Know?”

For Wolesky, “Mamma Mia” is a fun show.

“People will see us having a good time,” she said. “Rosie is a fun character. She’s a bit feisty.”

Her favorite songs are “Dancing Queen” and “Super Trouper,” which she describes as a putting on a small rock concert.

“With the last couple years being chaotic for the performing arts, this is a great one to come back to,” Wolesky said. “It’s just a fantastic show.”

There are many people who work behind the scenes as well as those who don’t always have a named character, but help make the musical.

One such role in the Liberty North production is that of costumer Samatha Binning. While a handful of costumes have been rented, others are part of Binning’s responsibilities.

“There are about 60 people in the cast,” she explained. “I’m one person so there’s a lot on my plate. I want them to visibly look good, but comfortable when they are dancing and moving on stage. I am working at balancing the artistic and the practical.”

Senior Theresa Sudholt is in the ensemble and serves as dance captain and props master.

“I’ve really enjoyed the leadership opportunities,” she said. “I have gotten to run dance rehearsals and choreograph three or four numbers. I love theater and dance, and the opportunity to do both has been awesome.”

“I came in and together we decided on what to do after looking at the students we have,” VanDyke said. “For me, I have been learning the space while enjoying the kids, who have been outstanding in these roles. There have been good challenges now that we are back in the theater. There has been some recalibration of energy and stamina to return to a full musical.”

VanDyke, who is in his 22nd year of teaching, came from St. Joseph Central to Liberty North.

“Mr. (David) Young was amazing and I plan to honor the traditions he created and keep them going,” he said.