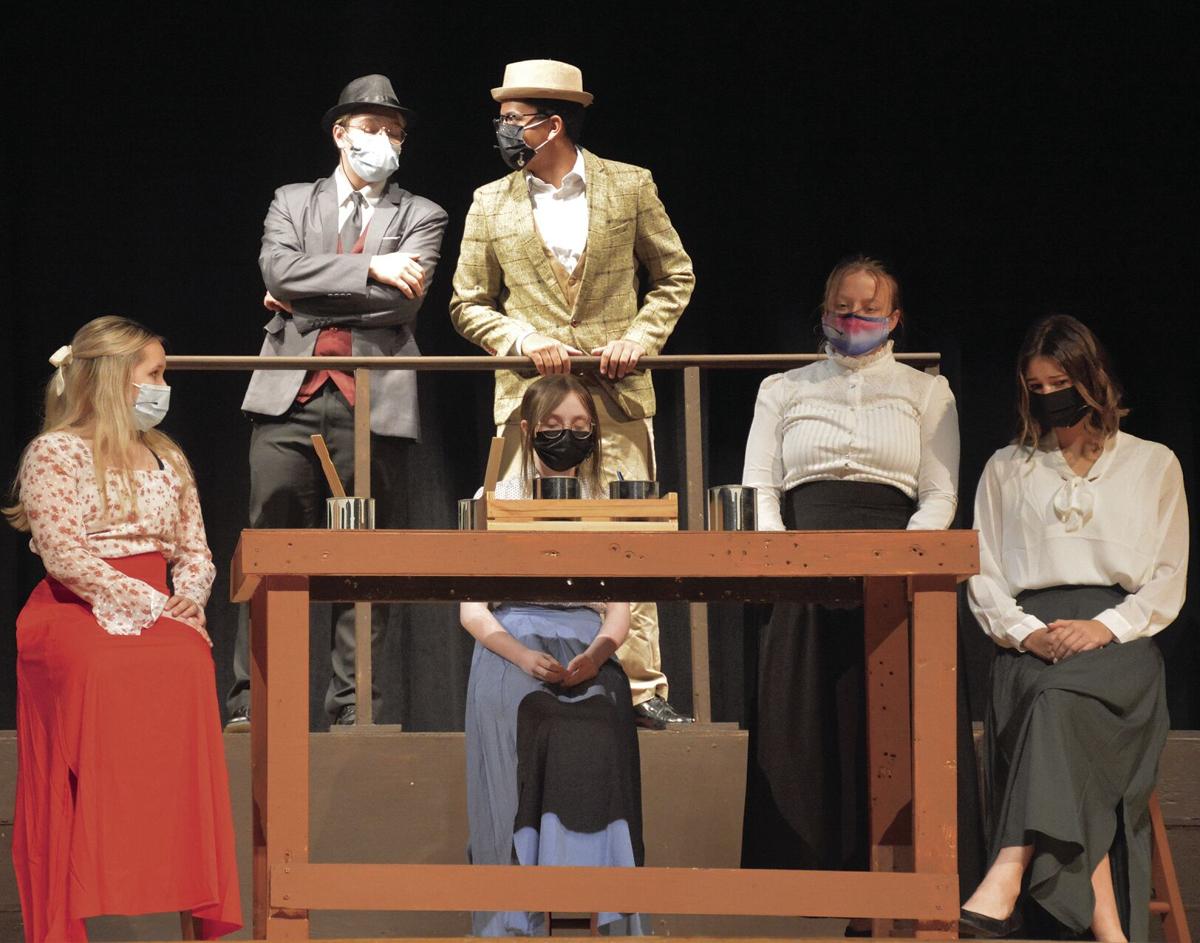 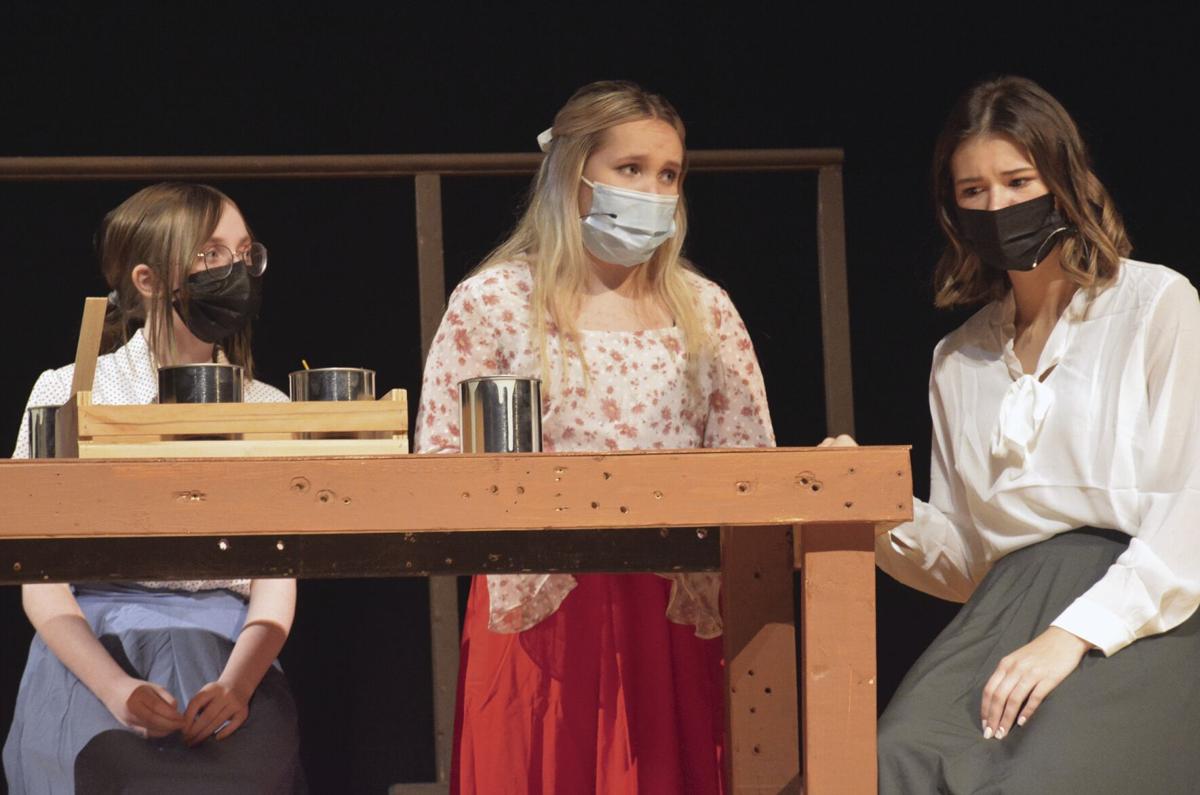 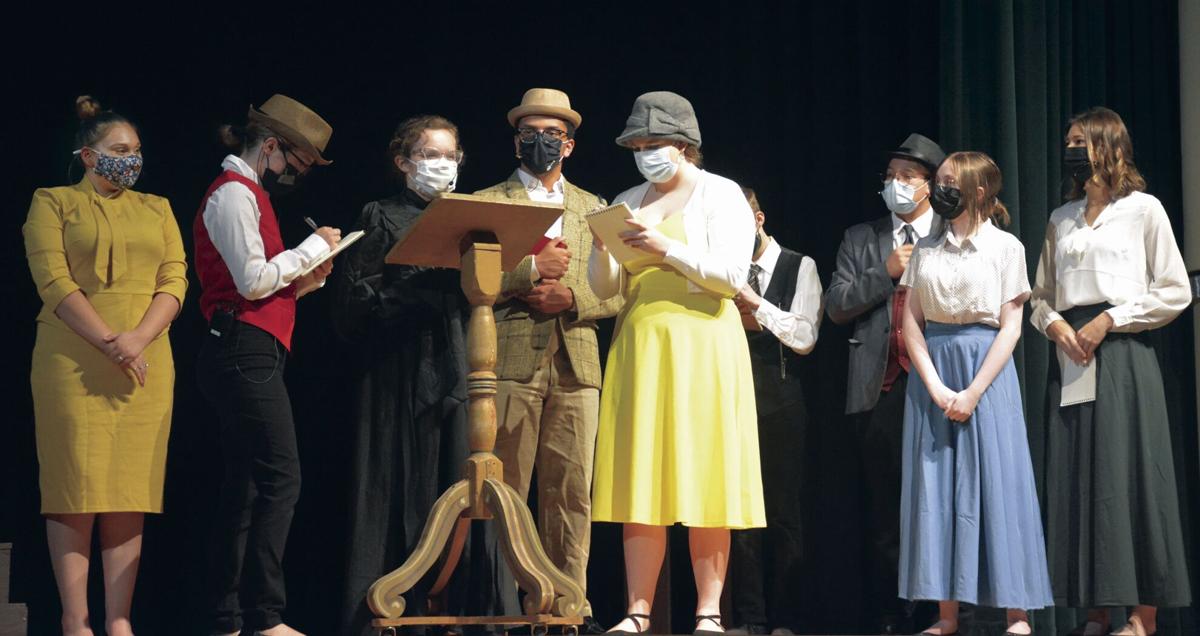 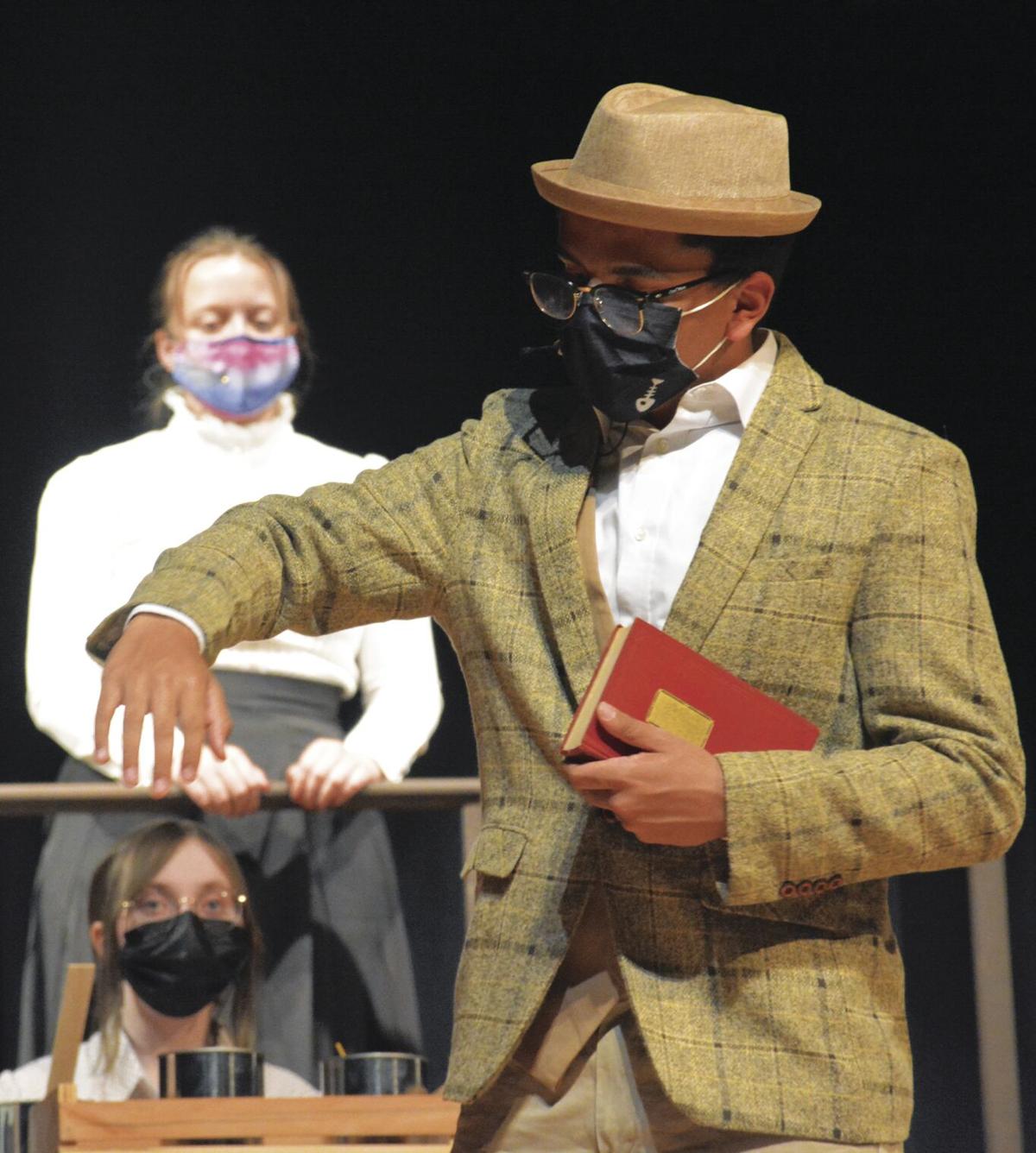 Dr. Von Sochocky, played by Elijah Bazalaki, explains the creation of radium-based paint in his garage as Alma Macneil, one of the U.S. Radium Corporation supervisors, played by Abby Rushing, listens. 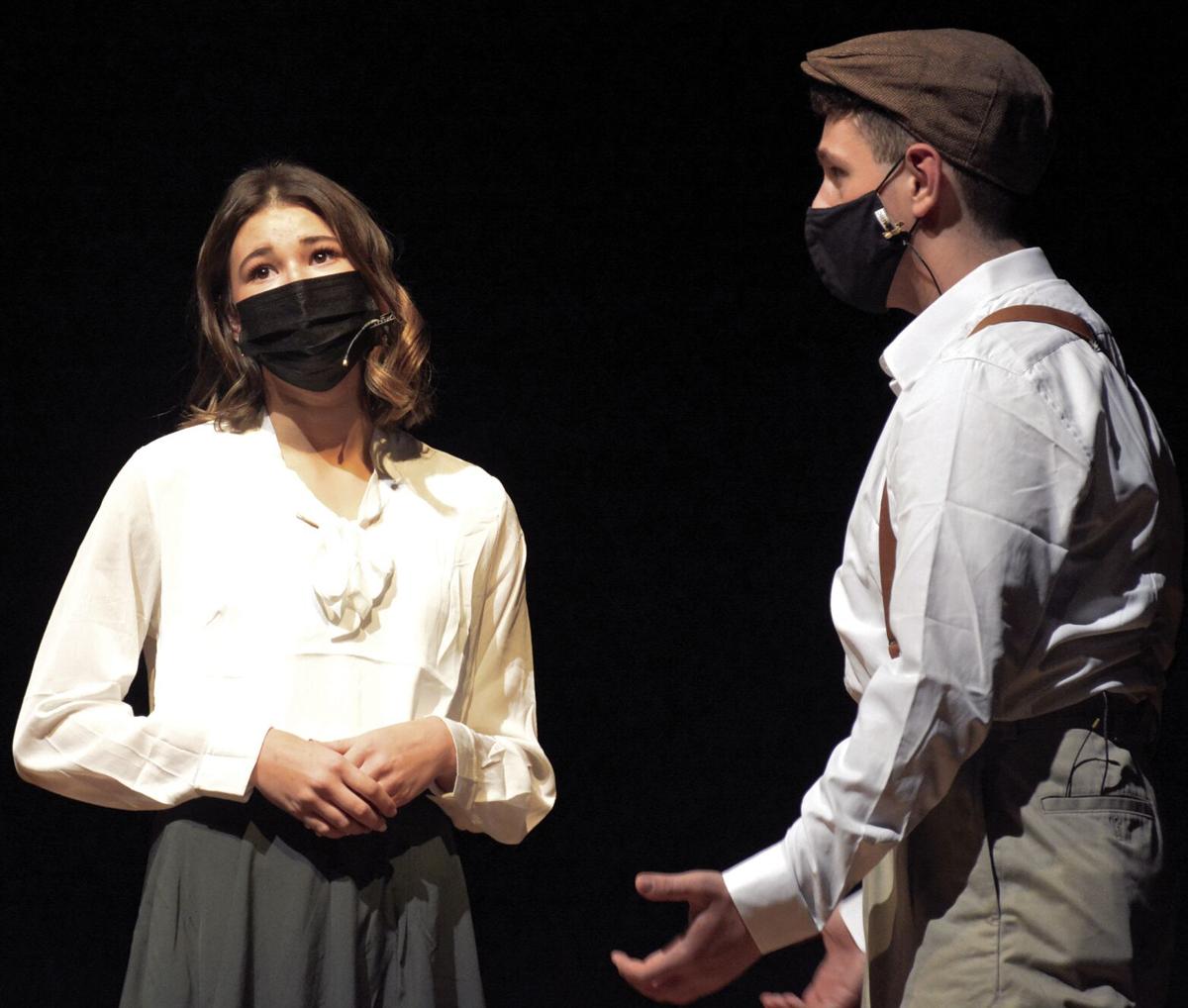 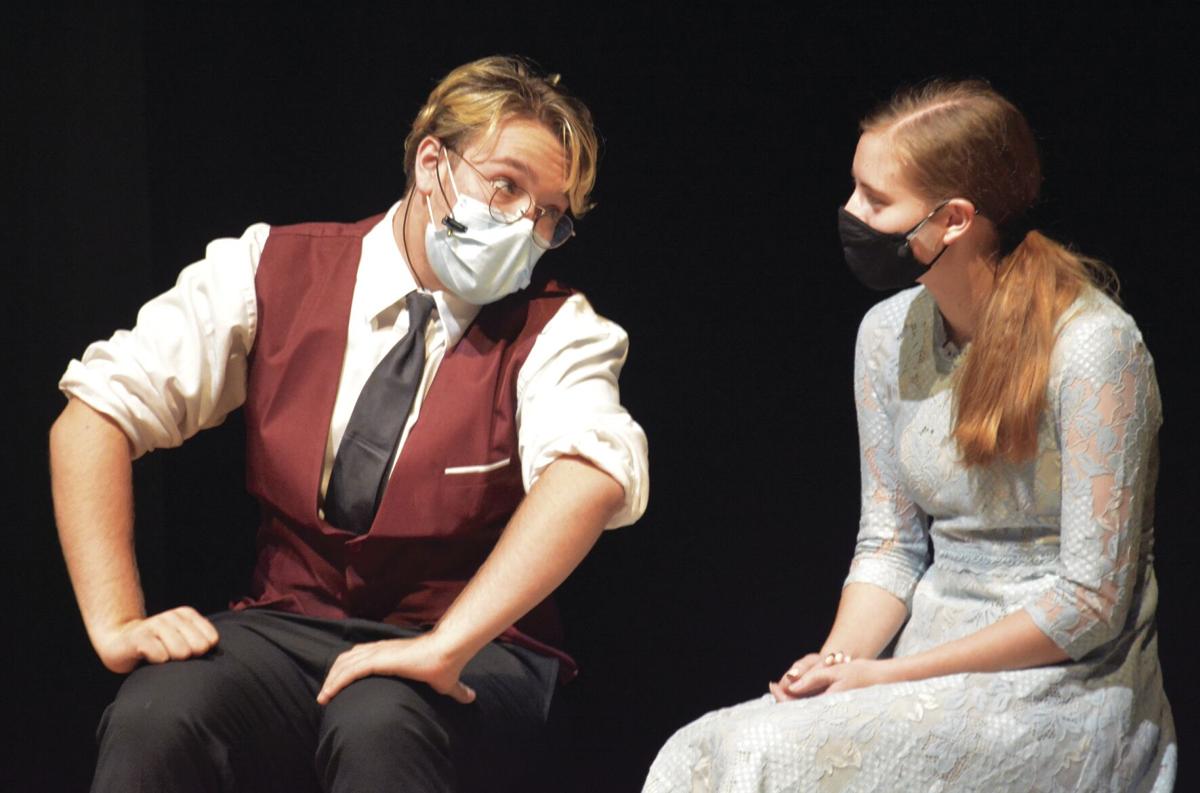 Dr. Von Sochocky, played by Elijah Bazalaki, explains the creation of radium-based paint in his garage as Alma Macneil, one of the U.S. Radium Corporation supervisors, played by Abby Rushing, listens.

SMITHVILLE — Starting Thursday, Oct. 21, more than 20 Smithville High School theater students are going to look at the plight of female workers, role of science, search for health and wealth and the power of the underdog in “Radium Girls.”

Theater teacher Dalton Pittenger said he made the decision to again stage a play rather than the traditional fall musical following last year’s model.

“I pushed the musical to the spring and it worked well,” he said. “With the play first, many of those who audition for the play may not be comfortable as singers, but by second semester, they may have found a bit more experience and confidence to try the musical.”

The other decision for selecting “Radium Girls” came with the number of girls in the program.

“Plus, it’s a piece with lots of relevant topics,” he said. “Currently, we are wrestling with media and science, the roles of the employee and the employer, … it is a political piece, but not a partisan one. It raises those questions. It’s a show with very little levity, but it will seem so familiar.”

In the play, a professor from a university visits with women working as dial-painters, creating glow-in-the-dark dials for watches using radium-based paint.

“He has a doctorate, but not a medical degree,” Pittenger said. “We talked about who would you rather be seen by, a doctor or an academic when health is on the line. Some of the kids jumped head first into research and others had conversations. We all talked about how people are people are people. Those in black and white photos lived colorful lives. They had the same wants and desires as we do. We talked about motivation.”

One of the lead roles, Grace Fryer, is played by junior Elle Colston. In many ways, her antagonist comes in the form of Arthur Roeder, the owner of the radium factory, played by senior Isaiah Thurston.

“Grace is naïve in some ways,” Colston said. “She tries to be independent, but she is young and relies on her friends and mother. I can relate to her youth. She’s 18 in the first act and she is a good friend to her friends. She’s also the serious one in the friend group. She really wants to do the right thing.”

For Thurston, Arthur Roeder is a complex character.

“First and foremost, he’s a family man who wants to do best for his wife and daughter. He sees his business success as their success,” Thurston explained. “However, his business ends up causing death. By the second act, he reflects on his business and the young women, but he seems to stick to his guns.”

Colston said she did research and noticed similar stories. “Phossy jaw” is mentioned in the play, which is the necrosis of the jaw, and was an occupational disease affecting those who worked with phosphorus without proper safeguards. It was most commonly seen in workers in the matchstick industry in the 19th and early 20th centuries.

Sophomore Elijah Bazalaki plays Dr. Von Sochocky, inventor of the radium paint used to illuminate watch dials. He ends up passing away from his own invention.

“He’s very passionate about science and believes what he created helped so many people,” he said. “His is a tragic story.”

All three actors see “Radium Girls” as a chance to learn from these lives lost. Thurston called the show a “teachable moment.”

“The U.S. Radium Corporation cared more for capitalism than life,” Bazalaki said. “Even the treatment of these women and what was written on their death certificates is deplorable and misogynistic.”

Colston said she hopes those who attend the play hear a narrative about toil, strife and vindication.

Southeast Editor Kellie Houx can be reached at kellie.houx@mycouriertribune.com.