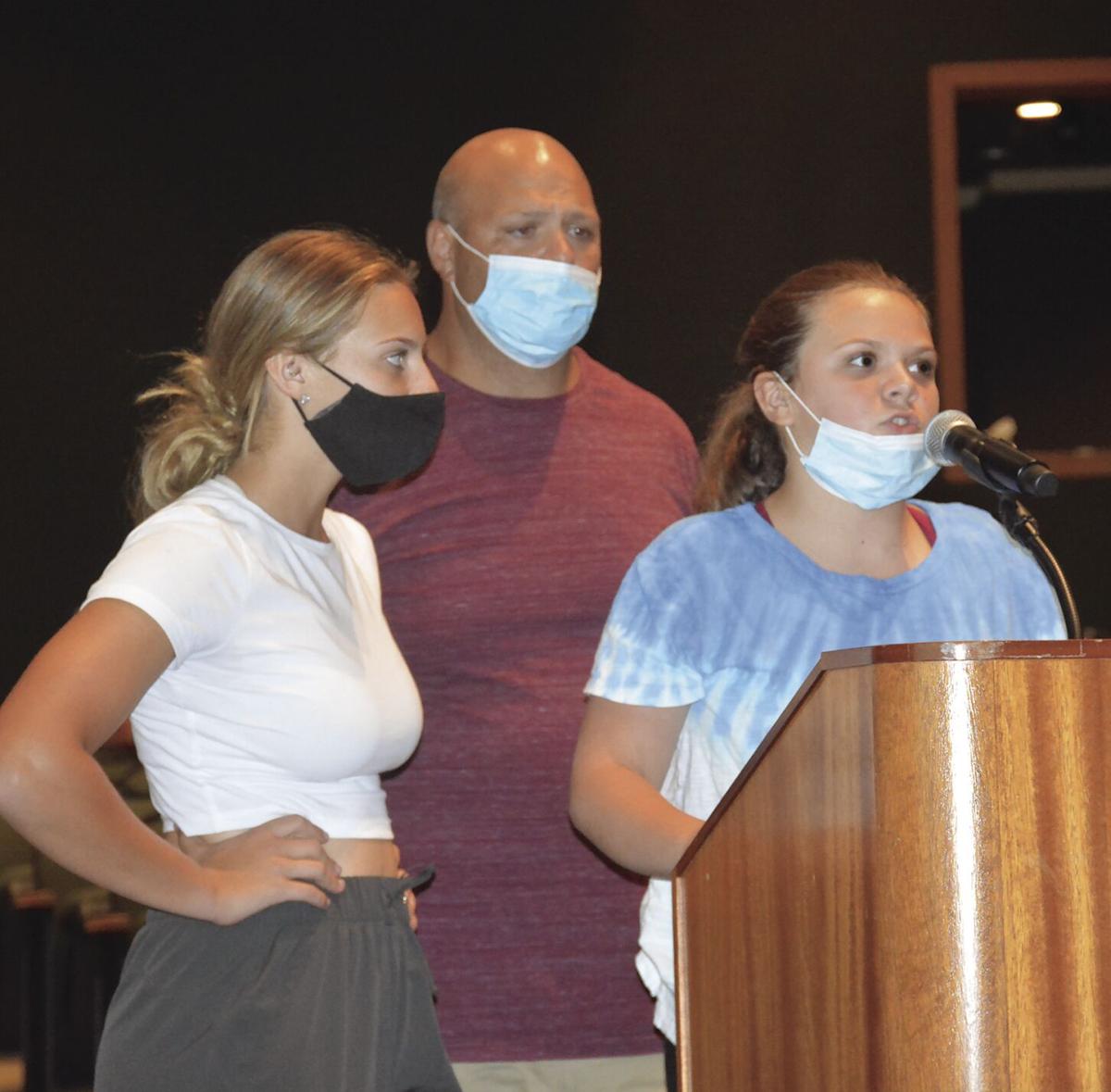 Neveah Palmer, a sixth-grader at Maple Elementary, told the Smithville School Board she gets headaches that sometimes develop into migraines because of wearing masks for 8.5 hours daily. Her sister, Elizabeth Palmer, a Smithville High School senior, spoke about wanting a “normal” senior year and her opposition to masks in school. 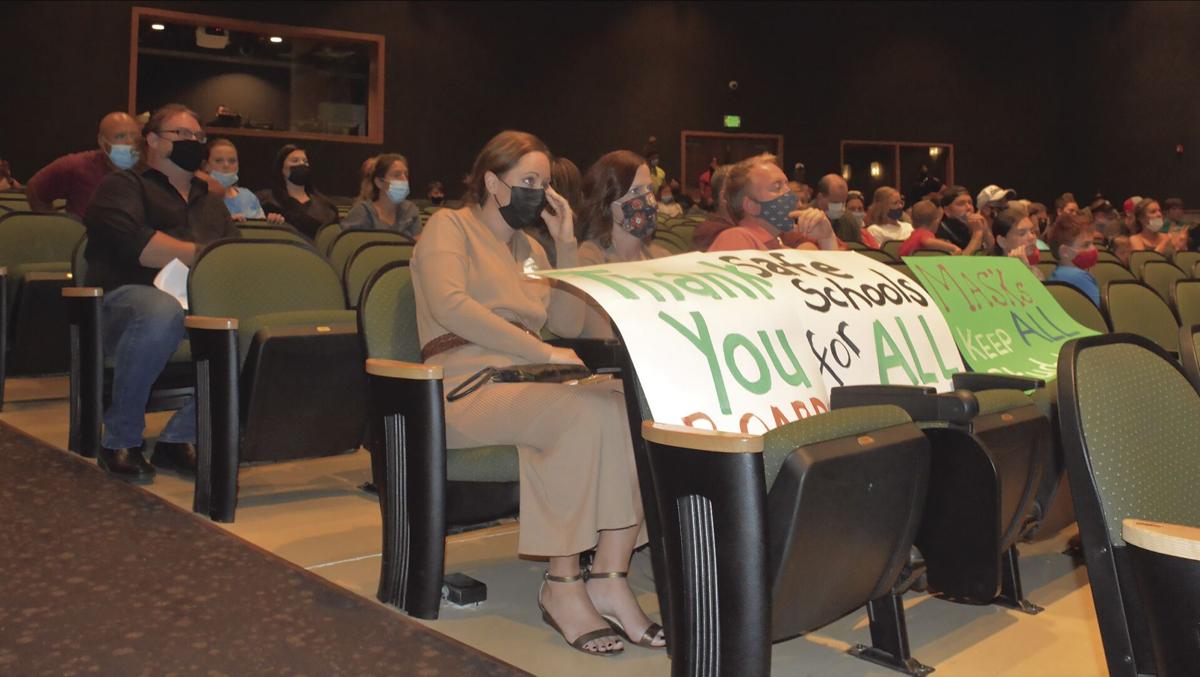 A small contingency of parents who attended the meeting support mask-wearing and displayed signs during the Smithville School Board meeting Wednesday, Sept. 15. The board voted 4-3 to continue its universal masking policy for personnel, students and visitors to district buildings.

Some in the crowd stood in applause to honor the three students who spoke about their school days and their being against wearing masks in school.

Neveah Palmer, a sixth-grader at Maple Elementary, told the Smithville School Board she gets headaches that sometimes develop into migraines because of wearing masks for 8.5 hours daily. Her sister, Elizabeth Palmer, a Smithville High School senior, spoke about wanting a “normal” senior year and her opposition to masks in school.

A small contingency of parents who attended the meeting support mask-wearing and displayed signs during the Smithville School Board meeting Wednesday, Sept. 15. The board voted 4-3 to continue its universal masking policy for personnel, students and visitors to district buildings.

Some in the crowd stood in applause to honor the three students who spoke about their school days and their being against wearing masks in school.

SMITHVILLE — Despite a majority of those in the audience against the policy, the Smithville School Board voted 4-3 Sept. 15 to continue its universal masking policy for personnel, students and visitors in district buildings.

During the meeting and ahead of the board’s vote, families concerned about students wearing masks in schools continued to share their displeasure with the Smithville School Board policy as they have in previous public meetings. They also expressed concerns about board procedure that only allows for 20 minutes of public comment at a board meeting despite the number of speakers who may want to address the board. Because of the policy limiting speaking time, the board encourages parents and district patrons to share their comments with the district via email.

Prior to the Sept. 15 board meeting, more than 25 people signed up to speak during public comment, however, because of the time limit placed on public comment and the board allowing each speaker up to 5 minutes each, the first four who signed up were allowed to speak. As none of these commenters included students, many in the audience last week grew frustrated, with some shouting their discontent and saying additional time should be allotted for students.

During her speaking time, audience member Whitney Carlile asked if students would be allowed to speak and Fales said if a speaker given time wanted to yield it to a student, he or she could. Carlile then expressed her opposition to the masking policy.

“Wearing masks has nothing to do with the safety of kids, it’s about playing the game and avoiding quarantine,” she said. “Is this truly the best the school district can come up with? You admit you don’t know if masks work, but you make students wear them for hours of the day. I expect more from those who make decisions about my children’s education.”

Carlile questioned why the school district made a more restrictive policy than the county health department as no universal mask mandate exists in the county. The mother also expressed frustration about her children’s medical exemptions to the policy, which she said were denied less than 24 hours before the start of school.

“They needed specific details regarding our child’s medical condition and then an administrative board would have veto power over what medical doctors say. What a legal issue that is for our district,” she said. “Please do better at welcoming the involved community. Parents are a powerful force that should be included.”

Aaron Knight sent emails to board members and shared local data that shows case count numbers in Platte and Clay counties trending down.

“What makes parents angry is having our kids wear masks eight hours a day, but then we see school board members in public not wearing masks,” Knight said, specifically pointing to Fales and Whitacre. “How is that not hypocritical?”

Parent Brooke Perkins added families are “desperate to be heard.”

“How come the goal post keeps moving? When do you tell us we can get back to normal?” she asked.

Casey Parr said the district needs to readdress the plan.

“We have never quarantined students like this for the flu,” he said. “It’s about freedom of choice.”

During the end of public comment, tensions ran high with many in the audience shouting at Fales, who runs the meeting as board president, to allow students to speak. Some accused him of being fearful of what he might hear.

“I’m not scared of anything,” he said. “Board policy states 20 minutes of allotted time for public comment.”

Neveah said her mask-wearing starts at 8 a.m. when she boards the bus for her 30-minute ride to school.

“It’s hard to breathe, we all get sweaty and hot,” she said. “I don’t get to interact with my friends as we are placed in a pod of four and that is who we are with all day. Lunch and recess is 55 minutes and that’s when we can take our masks off. … I get headaches and migraines. I have seen adults in offices not wearing masks, why is that fair? During your workday, how long do you wear a mask? If I am being forced to wear a mask, shouldn’t you, too?”

“I have had only one year of a normal school year here,” she said. “Sitting in the student section at football games, we don’t have to wear masks. Kindergartners who can’t see each other’s facial expressions; it doesn’t make sense. I can’t wear my glasses because they fog up.”

Senior John Baldwin said he can’t “take my mask off for 3 seconds to grab a drink of water without getting criticized,” he said.

“We have no choice. There all of you are criticizing us. We are pulled into the office. I don’t think any of this masking is right,” he said.

After students addressed the board and in his monthly COVID-19 status update, Superintendent Todd Schuetz said he wants the board to vote on masks at each meeting going forward.

“I have to do what is best for our community,” Schuetz said. “There are almost 3,000 people in our schools. Currently, we have 13 cases and 45 in quarantine. My recommendation is to stay the course for masking and address the issue again in October. I have to look at what is going on inside the doors of our schools.”

Saxton said there are inconsistencies between how the district and the community operates as the district requires masks, but county public health does not. Because of this, he would like to see the district ends its masking policy.

Matthies said he believes masks work, but that it is not his “job to tell you how to control your child’s health.”

“Kids at the football games stuffed in like sardines without masks and then they go inside the building with a mask on. It doesn’t make sense. I don’t feel like I should control your children that way,” he said.

Haggerty thanked those who sent mail messages and email to the district, adding it’s a hot button issue with community members on both sides.

“This has divided the community and dehumanized us,” he said. “This doesn’t foster good debate, we need to keep ourselves civil. Both sides have provided good information as well as mudslinging. Yes, we disagree and it has caused division, but eventually we have to come together for solutions.”