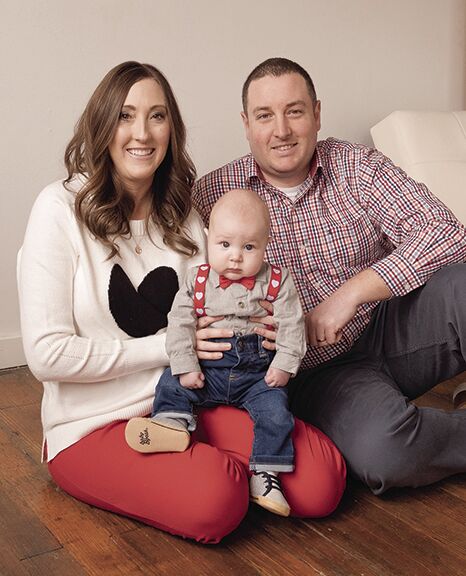 Katherine and Brett Bredemeier and their son, William Patrick, are now the picture of a happy, healthy family. At 38-weeks pregnant, the healthy part was missing as Katherine developed a little-known syndrome that resulted in her liver rupturing. 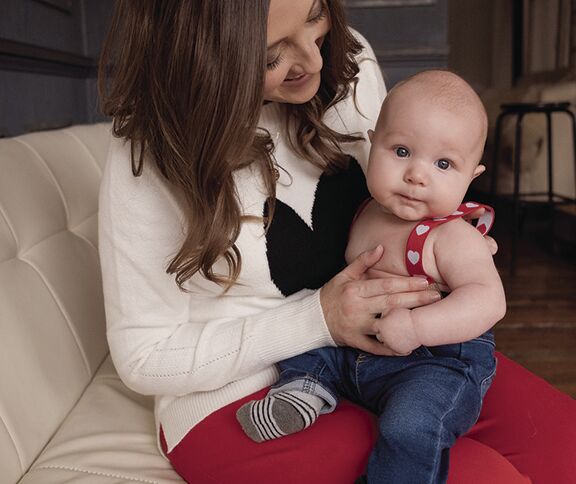 Looking like a little Cupid, William Bredemeier shows off his heart suspenders during a family photo shoot with his mother, Katherine Bredemeier, who also wears heart-themed clothing. 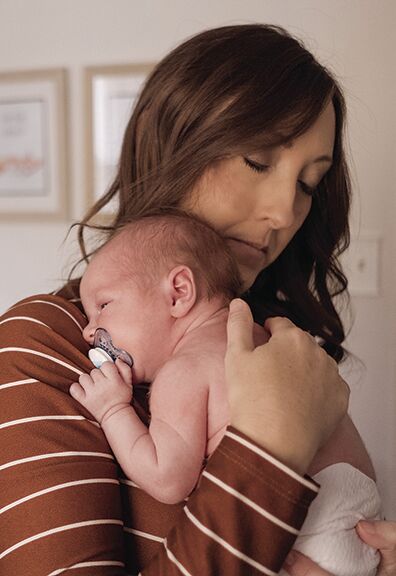 One of the earlier mother-son photos shows Katherine Bredemeier and her son William enjoying a tender moment.

Katherine and Brett Bredemeier and their son, William Patrick, are now the picture of a happy, healthy family. At 38-weeks pregnant, the healthy part was missing as Katherine developed a little-known syndrome that resulted in her liver rupturing.

Looking like a little Cupid, William Bredemeier shows off his heart suspenders during a family photo shoot with his mother, Katherine Bredemeier, who also wears heart-themed clothing.

One of the earlier mother-son photos shows Katherine Bredemeier and her son William enjoying a tender moment.

February is the month that often focuses on romantic love, but the first love often experienced and remembered by humans is the love a child receives from his or her mother.

A prime example comes in the form of Shoal Creek Elementary teacher Katherine Bredemeier and her five-month-old son, William.

Late last September, Bredemeier, at 38-weeks pregnant, and her husband Brett decided to go out for a meal.

“That was Tuesday,” Bredemeier explained. “I felt OK, but as the day went on, I didn’t feel good. I couldn’t really tell what was going on, but I didn’t feel like cooking.”

That evening, the pain just intensified, she explained. Initially thinking they might be contractions or the start of early labor, the couple went for a walk.

“Brett went to bed and I was miserable,” she said. “I paced around the house all night. By 3 a.m. Wednesday morning, I was up and vomiting. I thought of food poisoning, but I was having pain in my right shoulder. It was constant. I woke my husband up at 5 a.m. to get me Sprite and crackers. I called the on-call doctor and was told to go in and get checked out.”

The couple, who lives in Kansas City North, was a few minutes from North Kansas City Hospital. There, Bredemeier was asked if she could walk to labor and delivery.

“I am panicking as they wheel me up,” she said. “I get into bed and they are putting all the monitors on me. I couldn’t handle the monitors on me. The nurses and staff are telling me it’s for my safety and that of the baby. I kept telling them that it hurts.

”When I got up to go to the restroom, heart rates dropped. Then an ultrasound was performed. I kept asking for a break as that hurt, too. The technician asked me if I had fallen.”Bredemeier’s obstetrician, Peter Engelman, saw a hematoma on Bredemeier’s liver.

“Initially, the discussion was to induce labor or have a Cesarean delivery,” the new mom said. “Then my blood work was awful, including a low platelet count. I was told by Dr. Engelman that the C-section would take place and I would be under. I knew it was bad at the time.”

Engelman said the “bad” came in the form of HELLP syndrome, which can occur in about 1% of all pregnancies. Bredemeier’s liver ruptured and she was hemorrhaging.

“Certainly through training, I knew of HELLP,” he said. “This was the first time to see a ruptured liver. It was the first time because these are such unique cases. HELLP can be hard to diagnose. Katherine’s symptoms came up almost like a nonspecific viral infection, but as testing went on and the hematoma on the liver was discovered, everything switched to high gear.”

Engelman said doctors prepare for life-saving strategies.As a doctor, Engelman said he knows there are fears and concerns, but training prepares you for high-stress situations.

“With anesthesiology, nursing and surgeons, we have the multidisciplinary approach. That team relies on each other. My responsibility was to get the baby out and then the other doctors worked on her liver and acted to control her bleeding. We had a massive transfusion right at the beginning.”

Bredemeier remembers being in surgery.

“I also remember telling the anesthesiologist to please make sure I wake up,” she said. “I knew it was bad. On Thursday morning, they were lessening my pain meds, but I was on a ventilator. I had a poster and marker to write on while I was in the ICU. By Friday, I was moved back up to the labor and delivery floor. By noon, I got to meet my son.”

That blood transfusion included 10 units of cryoprecipitate, seven units of red cells, four units of platelets and three units of plasma. Engelman said he was not surprised by the blood needs.

“The blood clotting was needed and we were working to replenish her components,” he said. “In cases such as this, I think if we would have moved her from labor and delivery to a regular operating room, I am not sure we would have her here today.”

Today, Bredemeier said her liver is fine after tests and ultrasounds. She praises her husband for stepping up during those first few weeks as she recovered from the significant operation. She is also thankful for her medical team.

“I won the lottery with my doctors,” she said. “I feel honestly lucky. We went at the right time to the hospital. If I would have gone down earlier, I might have been sent home with a diagnosis of early labor. I have been letting friends and family know about the blood transfusion. Initially, I kept saying that I would love to replace the ... units I took.”

To that end, her sorority sisters donated. One of her teacher peers at Shoal Creek Elementary brought in a mobile blood drive that generated 19 units Jan. 8.

“My parents came to donate as well as my husband,” the mom said. “I want to raise awareness about blood donations.”

Bredemeier said she also wants to raise awareness for other women to listen to their own bodies and advocate for themselves when they think something is wrong.

“First and foremost, I don’t want my son to think this was caused by him,” she said. “I am a first-time mom and I want to share my story so others don’t wait until it is too late. We have met with a high-risk baby doctor and the chance of this happening again is slim. I take a baby aspirin daily. I could develop it again or have a normal pregnancy. Right now, we feel very blessed and a bit like we won the lottery.”

“I am so glad mom and baby are healthy,” he said. “At this moment and at this time, we are looking at health care providers and first responders as heroes. If you make a blood donation, you are saving a life. During the early days of the pandemic, donation centers were closed. Now they are open under safe means. I can tell you we need blood donations more than ever.”