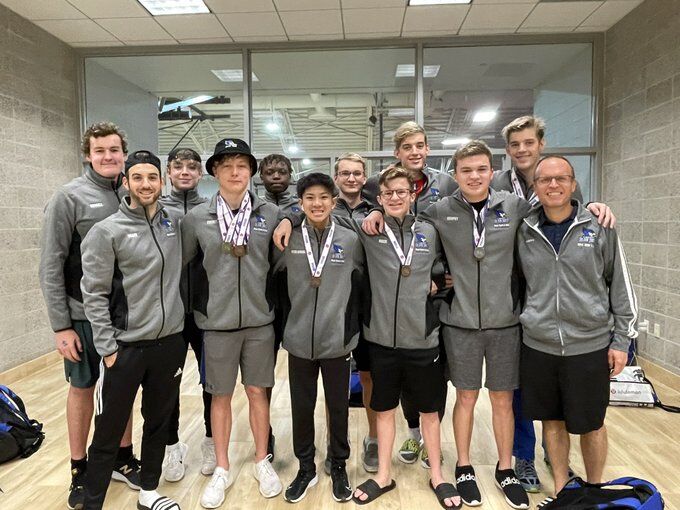 Liberty’s state swimmers finished as a team in seventh place with 122 points.

Liberty’s state swimmers finished as a team in seventh place with 122 points.

Liberty and Liberty North swim teams traveled to St. Peters to take part in the Class 2 State Championship Friday and Saturday, Nov. 12 and 13.

The Blue Jays finished in seventh place with 122 points while the Eagles finished in 18th place with 32 points. Liberty’s Ian Everett and Caden Murphy led the way for the team. Everett dominated the 100-yard freestyle to win the state championship with a time of 45.56. The sophomore tied his school record with that finish. Everett also earned third place in the 200-yard freestyle with a time of 1:38.75.

Murphy earned second place in the 200-yard IM with a time of 1:53.05. The University of Nebraska-Omaha commit shined in the 100-yard breaststroke as well. He ended his year with a fourth place finish in that event to help his squad.

Augustine’s top finish came in the 100-yard breaststroke when he hit the wall in seventh place with a time of 1:00.12. The two freshmen highlighted a team that sent the most swimmers in school history with 12 different athletes.

Anderson-Jones said he always looked up to the anchors of each Liberty North relay team his freshman year so it was his goal to play the same important role his final year with Liberty North.

“Being the anchor of both my relays at state took a lot of hard work and determination throughout the season,” Anderson-Jones said. “I was extremely proud to have had that position my senior year and would like to thank Coach Warner and my peers for believing in me and my abilities to lead the team and be in that position.”

Anderson-Jones will be taking his abilities to nearby William Jewell College, where he will continue his swimming career with the Cardinals at the NCAA Divison II.

“My most memorable moment would be my senior year at state,” Anderson-Jones said. “The energy that came from the crowd while we were being announced is something I will remember forever.”