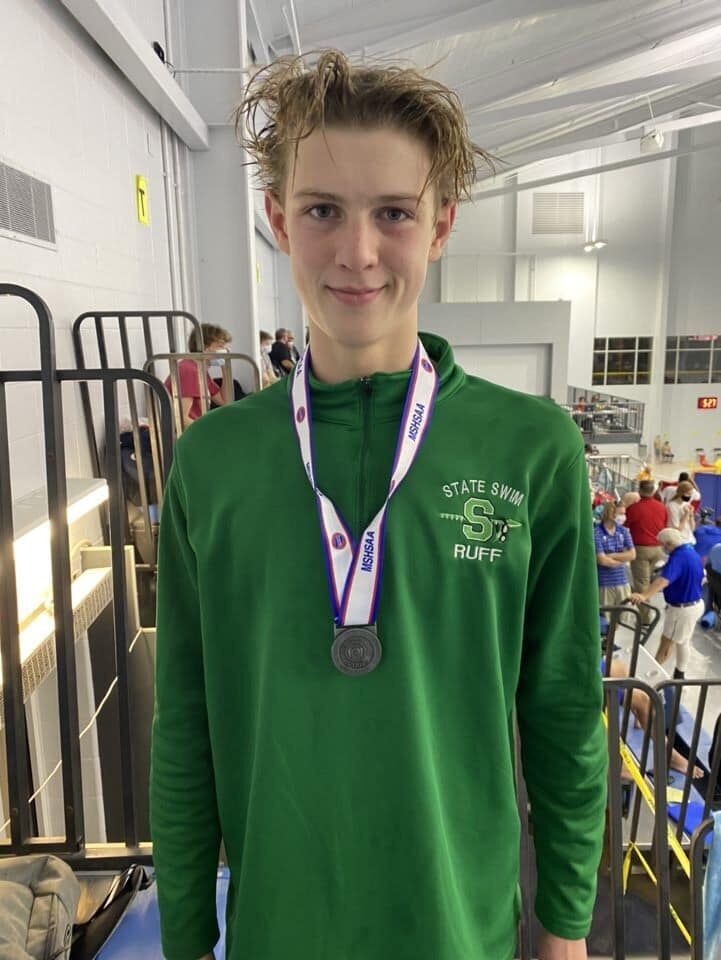 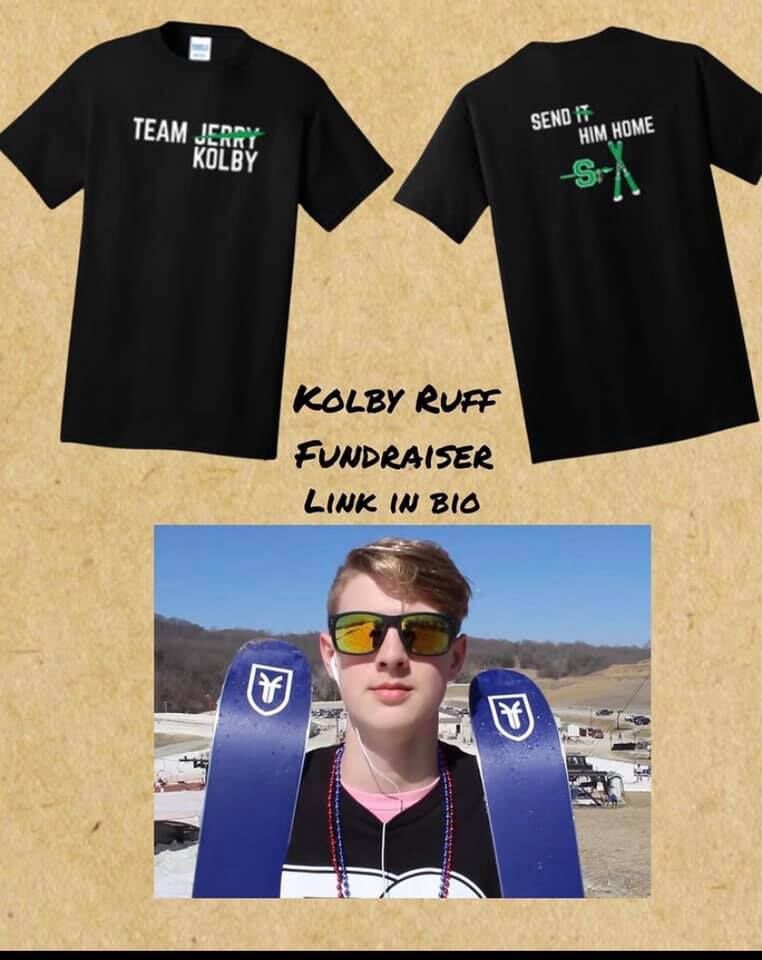 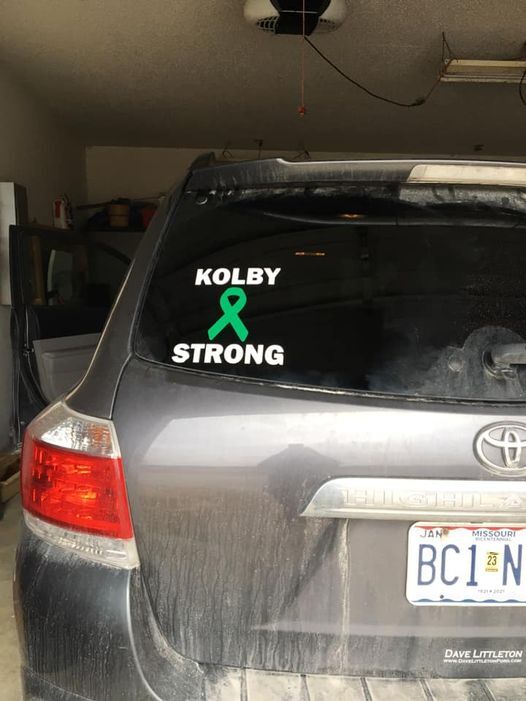 A picture of a Kolby Strong decal. The item is being sold as a way to raise money to help the Ruff family pay for the medical bills for Kolby Ruff, who was left in critical condition after a car crash on Christmas Day.

A picture of a Kolby Strong decal. The item is being sold as a way to raise money to help the Ruff family pay for the medical bills for Kolby Ruff, who was left in critical condition after a car crash on Christmas Day.

SMITHVILLE — After a car crash left a 16-year-old from Smithville in critical condition, members of the community are rallying to help his family raise funds for his medical bills.

Kolby Ruff, a sophomore who competes on the Smithville High School boys swim team, remains unconscious at Children’s Mercy Hospital in Kansas City after being involved in a two-vehicle crash on Christmas.

Ruff was driving eastbound on Missouri Highway 92 just before 1 p.m. Dec. 25, according to a Missouri State Highway Patrol crash report. On a curve about a quarter-mile west of U.S. Highway 169, he traveled off the right side of the road before overcorrecting into the path of a westbound vehicle, the report states.

The report indicates the 39-year-old driver of the other vehicle refused treatment at the scene while his 78-year-old passenger and Ruff were transported by ambulance to North Kansas City Hospital, both in serious condition.

Smithville High School and other members of the community started fundraising efforts to help the Ruffs raise the money for Kolby’s medical bills.

The school collected $5 from teachers and staff in exchange for wearing jeans Thursday, Jan. 7 during the school day. A photo on the school’s Facebook page shows at least 30 staff members participating with a caption indicating that there were more participants not pictured. The post finished by saying “We are Kolby Strong.”

TW Sportswear, an athletic apparel and print shop based in Smithville, created shirts and wristbands to help raise money. The various merchandise is emblazoned with phrases including “Team Kolby,” although his name sits underneath the name “Jerry,” which has been crossed out.

Yvonne said Jerry is Kolby’s nickname at Snow Creek in Weston. Jerry is a skiing lingo, a joke about fearlessly wiping out on the slopes.

Kolby follows an Instagram account called Jerry of the Day, where people send videos of wipeouts, which is why one of the shirts reads “Team Jerry Send It Home” with “Jerry” replaced with “Kolby” and “It” replaced with “Him.”

“If you asked somebody at Snow Creek if they knew Kolby, they’d say “Who?” she said. “But if you asked them about Jerry, they’d said “Oh yeah, I know him.’”

Skinner said she was inspired by a similar effort from her stepmom a few years ago to raise money for a family paying medical bills for a child with cancer.

“We went with Kolby Strong because Kolby is the strongest person that we all know,” she said.

Skinner felt compelled to help because Kolby was there for her when she needed him the most.

Skinner said she had been best friends with Kolby since eighth grade, but last year she was going through a particularly tough time.

She said she was failing all of her classes at the time. Kolby sensed that she was not herself and reached out to her to see if he could help. After not receiving a response for a couple hours, Kolby asked his mom for a ride to Skinner’s house.

He ended up staying with her that evening, lifting her spirits and helping her with her homework. He returned every night that week until Skinner’s grades returned to As and Bs.

She said he helped multiple people in similar situations. She described him as “a living angel.”

“Kolby is just a different type of person,” Skinner said. “Kolby could give and give and give until he had absolutely nothing, but he would be OK with that.”

His mom said she started to really notice Kolby’s knack for kindness when he started high school in 2019. She’s known about him helping others, but she’s still amazed by all the stories that she has heard since the crash.

One story was told using a video posted on social media.

Kolby heard that his swimming teammate Alberto Crupi, a foreign exchange student, was having a tough time over the holidays. Kolby decided to buy a gift for Crupi and deliver it on his way to work. Crupi’s host dad, David Stewart, captured the moment via a doorbell video recorder.

In the video, Kolby is seen running up to the door wearing his Price Chopper polo, knocking on the door before leaving a box on the doorstep.

Kolby had recently finished his sophomore swim campaign with four state medals, including second-place medals as an individual and on a relay team. His performance stood out even more because of the challenges he had already overcome.

Kolby’s older brother tested positive for COVID-19 heading into the first day of school, which was also the day of Smithville’s first swim meet of the season. The Ruffs entered a two-week quarantine.

During that time, the family found out that Kolby’s grandmother, who had not had contact with them, also came down with COVID-19. She died a week later. Kolby stayed out of school and the pool for another week to be a pallbearer at the funeral.

In an interview with the Courier-Tribune after the state swim meet, Kolby said he had to work really hard to regain ground on his competitors, many of whom swim year-round on club teams.

He said he limits himself to only swimming during the high school season so he can moderate the pain caused by a shoulder condition called multidirectional instability. The condition kept Kolby away from competitive swimming for most of junior high. He decided to give it another go heading into his first year of high school.

When he was struggling with his shoulder pain caused by MDI, Yvonne would tell him that they don’t know why this is happening, but there’s gotta be a plan for you out there.

“God, I don’t know what I’m going to tell him when he wakes up,” she said.

Yvonne said Kolby felt devastated at the various setbacks he experienced, but he would never get mad. She said he kept an amazing attitude. His condition limited his abilities to compete in events like butterfly or backstroke, but instead he concentrated on being the best at freestyle.

His family, including his father Keith Ruff and his older brother Kyle Ruff, are trying to remain positive during this process. Yvonne continues to update Kolby’s status via the Facebook group “Kolby Ruff — Kolby STRONG.”

He had positive signs this week as he’s started to manage his blood pressure and his temperature on his own.

On Tuesday, Jan. 12, a neurosurgeon performed a test to get a response to pain. Yvonne reports that Kolby moved his entire body. She said the doctors are slowly reducing some of his medications to allow him to be more responsive.

Kolby still has a long road ahead.

Yvonne said the family is arranging long-term rehabilitation for him as soon as he is stable enough to travel. The family is researching TBI success stories and figuring out the best path for Kolby after he wakes up. They’re considering treatment at Madonna Medical Center in Lincoln, Nebraska or Craig Hospital in Englewood, Colorado.

The road to recovery will likely involve high-cost treatments. The family reports that over $20,000 has already been donated.

TW Sportswear will continue selling “Team Kolby” merchandise through end of Sunday, Jan. 17, at rufffundraiser.itemorder.com/sale. Skinner said decals can be ordered by contacting her via Facebook Messenger at facebook.com/jayden.skinner.127.