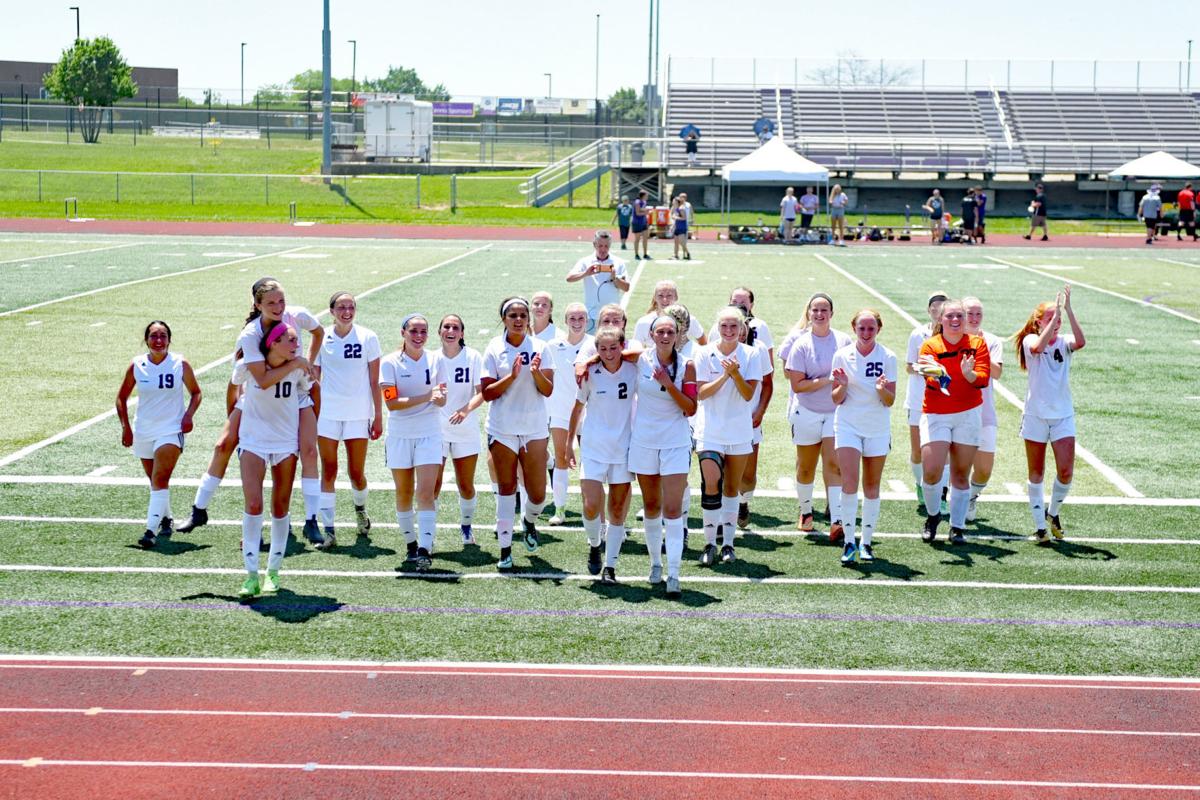 The Kearney girls soccer team celebrates after defeating Notre Dame de Sion, the No. 1 team in the nation, on Saturday, May 26, at Kearney High School. 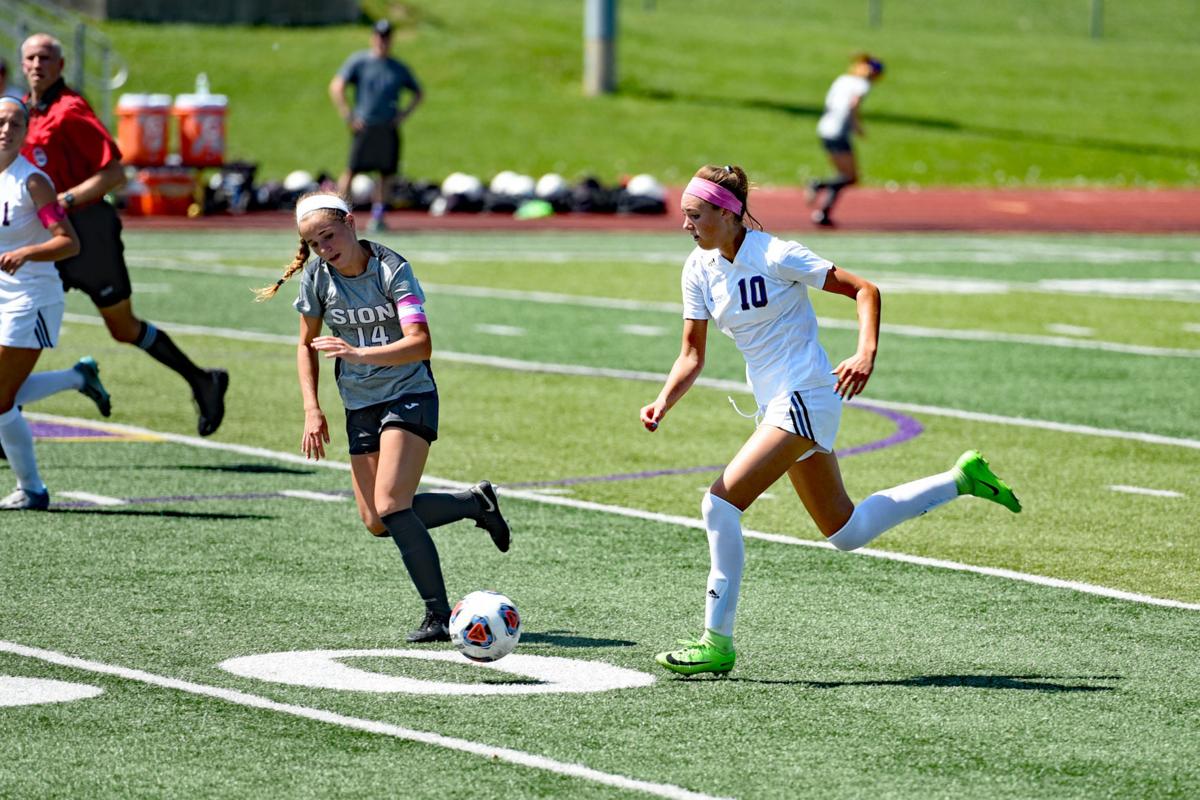 Kearney junior Serra Hanrahan moves the ball up the field during the Bulldogs’ state quarterfinal clash with Notre Dame de Sion on Saturday, May 26, at Kearney High School. 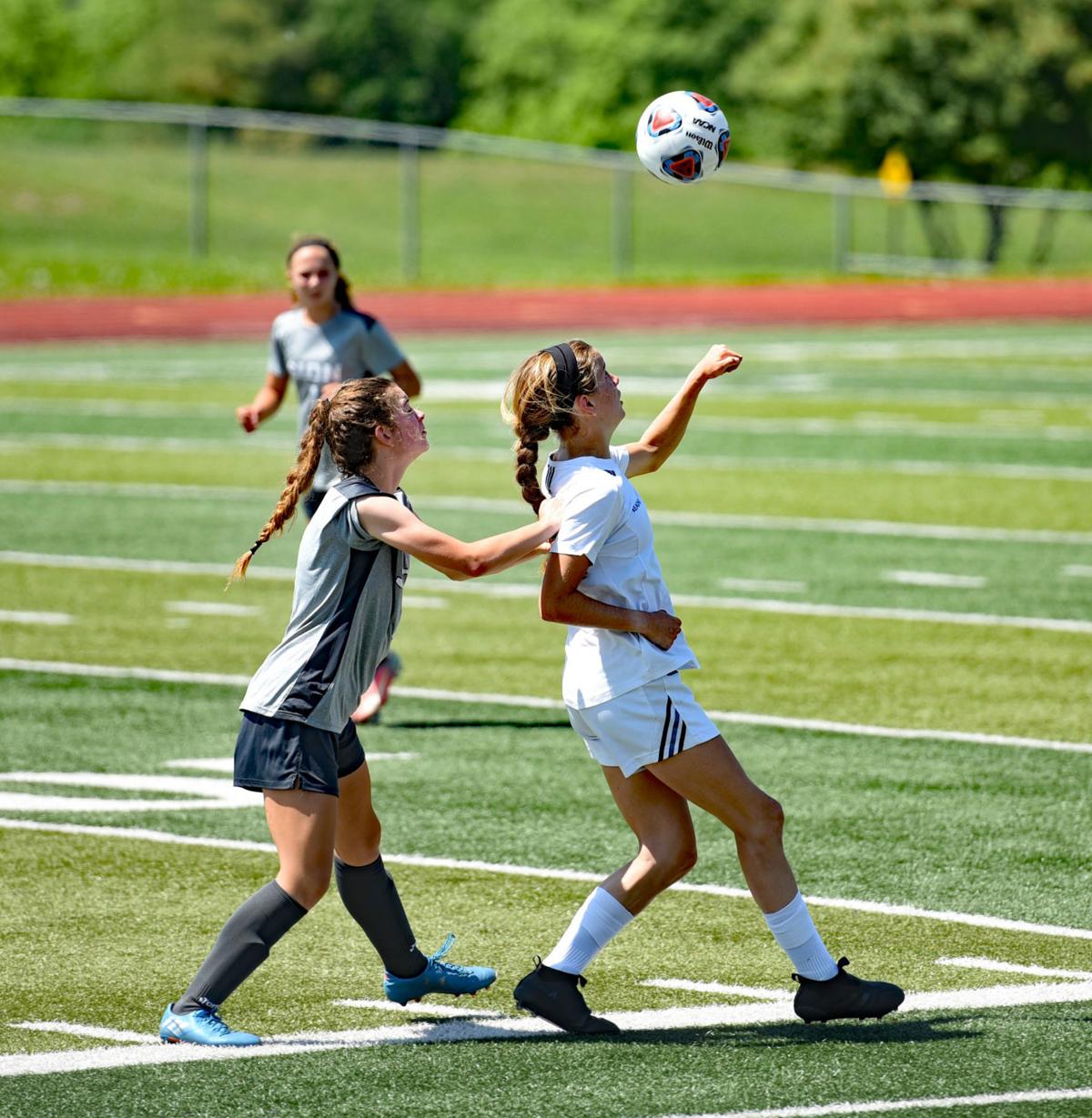 The Kearney girls soccer team celebrates after defeating Notre Dame de Sion, the No. 1 team in the nation, on Saturday, May 26, at Kearney High School.

Kearney junior Serra Hanrahan moves the ball up the field during the Bulldogs’ state quarterfinal clash with Notre Dame de Sion on Saturday, May 26, at Kearney High School.

The Notre Dame de Sion girls soccer team, ranked No. 1 in the nation by USA Today and MaxPreps.com, found out the hard way.

Tenacious from the start, Kearney went after an undefeated de Sion team and came away with a 1-0 win in a state quarterfinal game Saturday, May 26, at Kearney High School.

The Bulldogs entered the game ranked No. 35 in the MaxPreps poll, but that didn’t keep them from believing they would win.

Sion entered the game having won 50 of their last 51 matches. They had played in three consecutive MSHSAA championship games, winning two. Sion was featured the day before on the KCTV 5 website. Kearney was a mere footnote in the final paragraph of the KCTV story.

As it turned out, Kearney was the story.

The game-winning goal was scored by sophomore Caroline Kelly, who was missing state track to take on de Sion.

Kearney finally broke through in the 58th minute. Senior Paige Holmes slotted a pass to Kelly, who had her defender shielded on her back. Kelly drove the ball straight at the de Sion goal. Fennewald came off her line and charged. But Kelly fired a hard shot that split the keeper’s hands and found the net.

“It is pretty cool that it’s my third one this year, making it to state,” Kelly said.

She also was part of the state basketball, and track and field teams.

“It took a team effort to make the final four,” Kelly said. “Everyone was playing really well on Saturday getting the job done.”

It was all the Bulldogs needed to take down the nation’s top-rated team.

Kearney took it right at Sion from the start. Kearney controlled possession the entire first half, which shifted pressure to the de Sion all-state goalkeeper Afton Fennewald.

That was part of the preparation.

“They (de Sion) came out that first 20 minutes and didn’t know what hit them,” Kearney coach Amanda Hopkins said. “That set the tone for the whole game.

The Storm mounted an attack in the 33rd minute, but Behney made a diving save to keep the game scoreless.

As the half wound down, Kelly made a slick pass to junior Kaitlyn Speaker, whose shot missed wide right.

The Bulldogs held a decided shot advantage, but when the teams broke for half, the score was knotted 0-0.

Bulldogs senior Elyse Kelly’s shot was denied in the 45th minute. A shooting frenzy by Kearney in the 50th minute came up empty. Numerous Bulldog shot attempts in the box were blocked by the Storm.

The Storm came hard the remainder of the game. The Bulldogs’ stingy defense and midfield always had an answer. Kearney missed a few more shots that could have iced the game.

The Storm only managed to challenge Behney on a few occasions. The final de Sion gasp came in the final 20 seconds. The Storm set for a corner kick, but the stiff Kearney defense snuffed the effort. When the Bulldogs cleared the ball, reality set in for both teams.

It was euphoria for Kearney. It was agony and finality for the Storm.

Kearney’s next outing is a state semifinal match with Rockwood Summit at 2 p.m. Friday, June 1, at Swope Soccer Park.

Badgers in the XFL: Check out performances by former Wisconsin players in Week 2

Sports Editor Thom Hanrahan can be reached at thom.hanrahan@mycouriertribune.com or 389-6643.