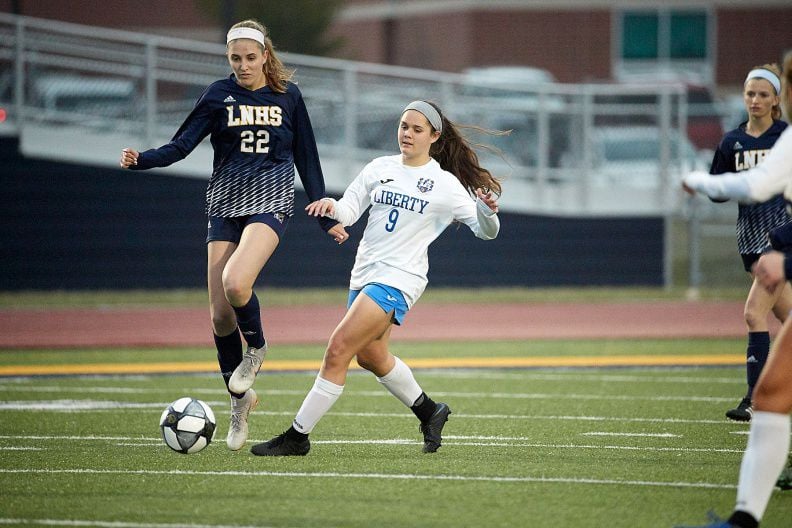 Liberty North soccer player Julia Johnson is one of three juniors who spearheaded a social media initiative by the Liberty North girls soccer team. Johnson is pictured here during a game against Liberty in May 2019. 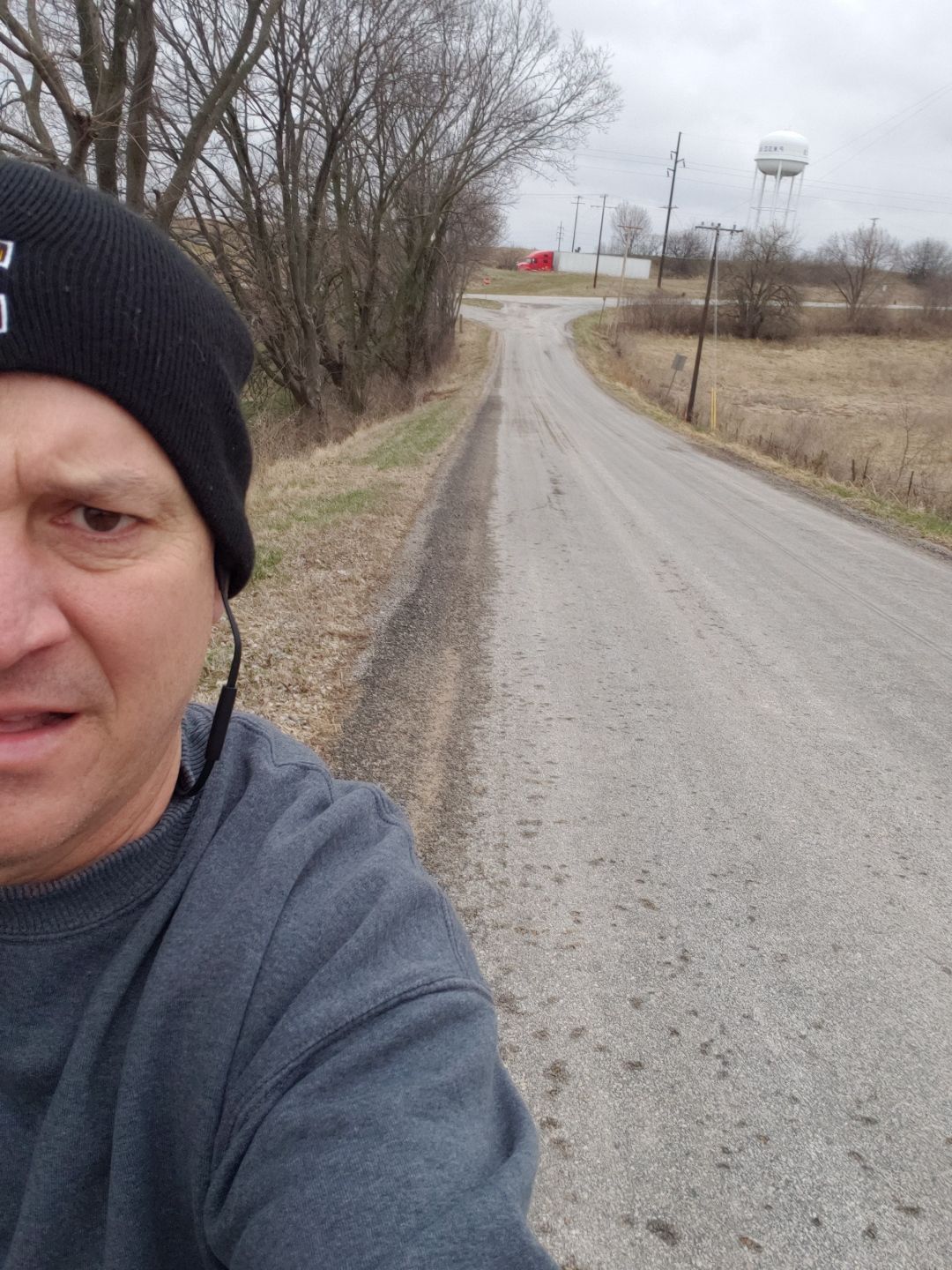 Liberty North girls soccer coach Steve Person runs down a gravel road for his workout that he posts to social media to inspire his team to keep practicing on their own as schools remain closed through at least April 24. 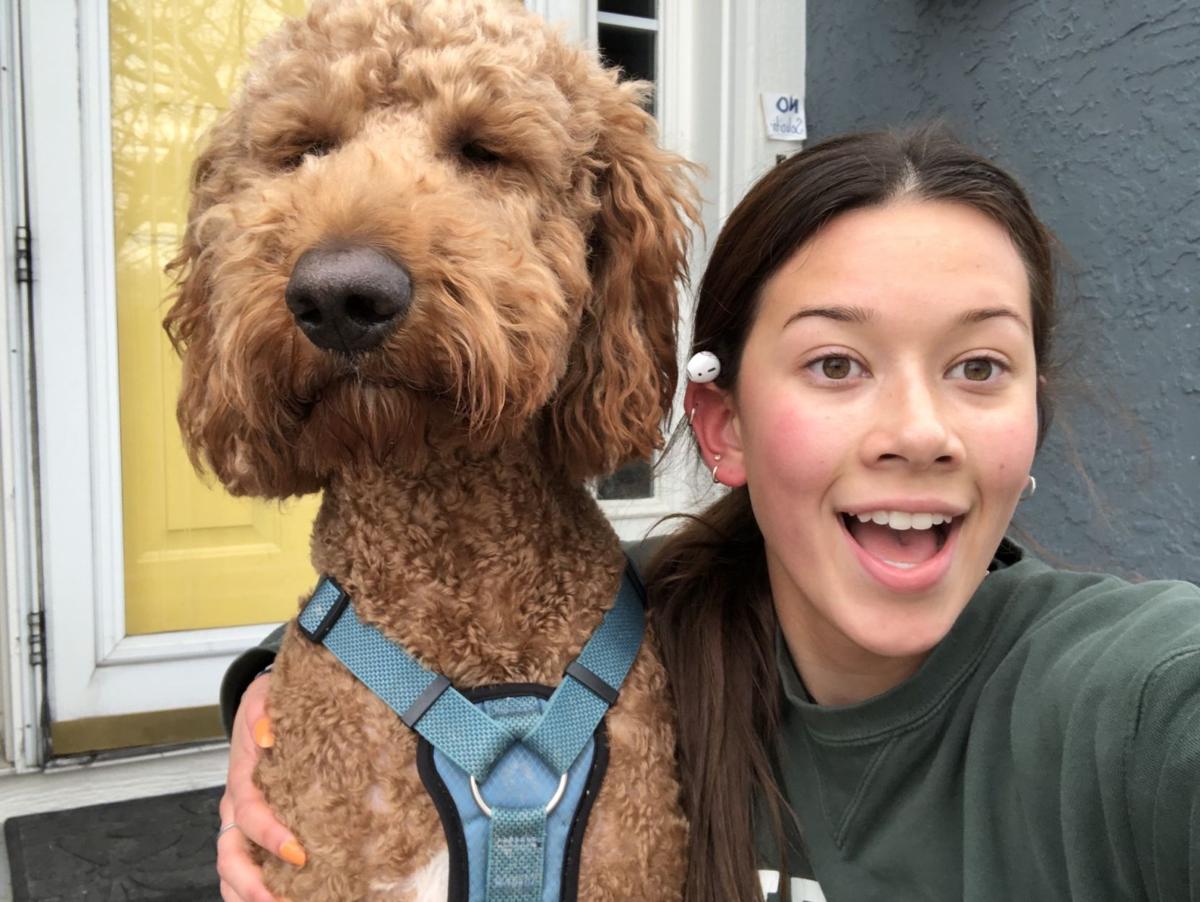 Liberty North junior soccer player Ella Trinidad poses with her dog Ollie after she finishes a workout on March 17. 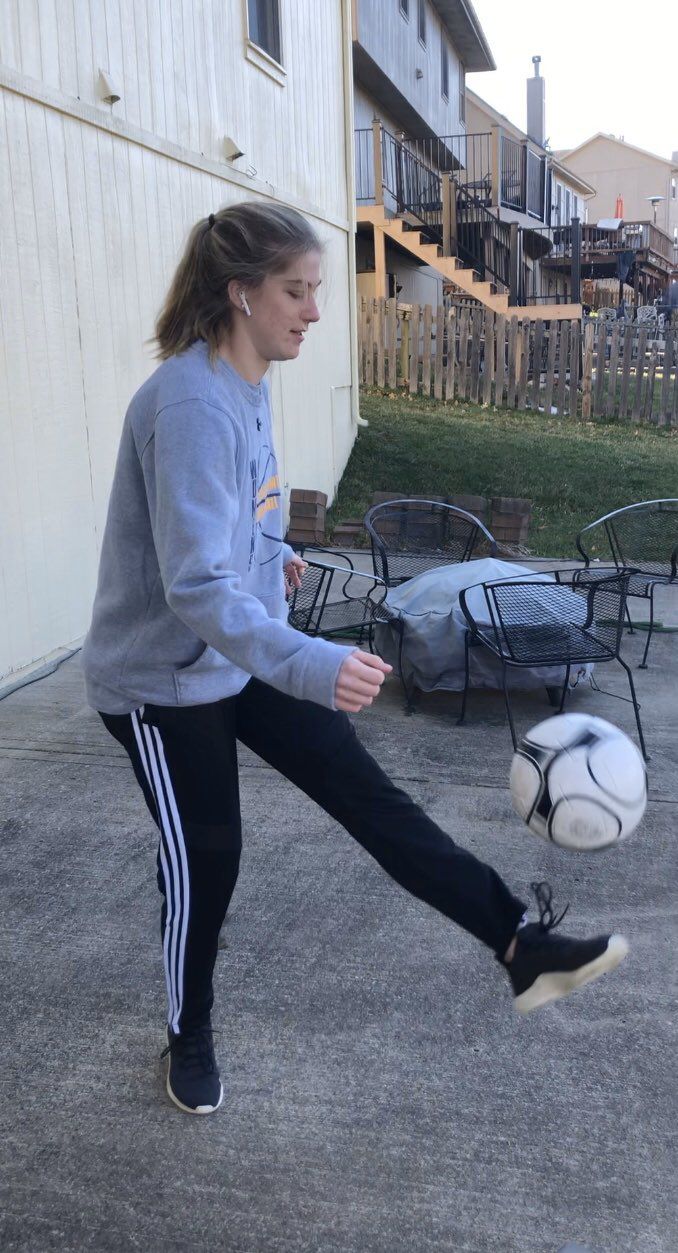 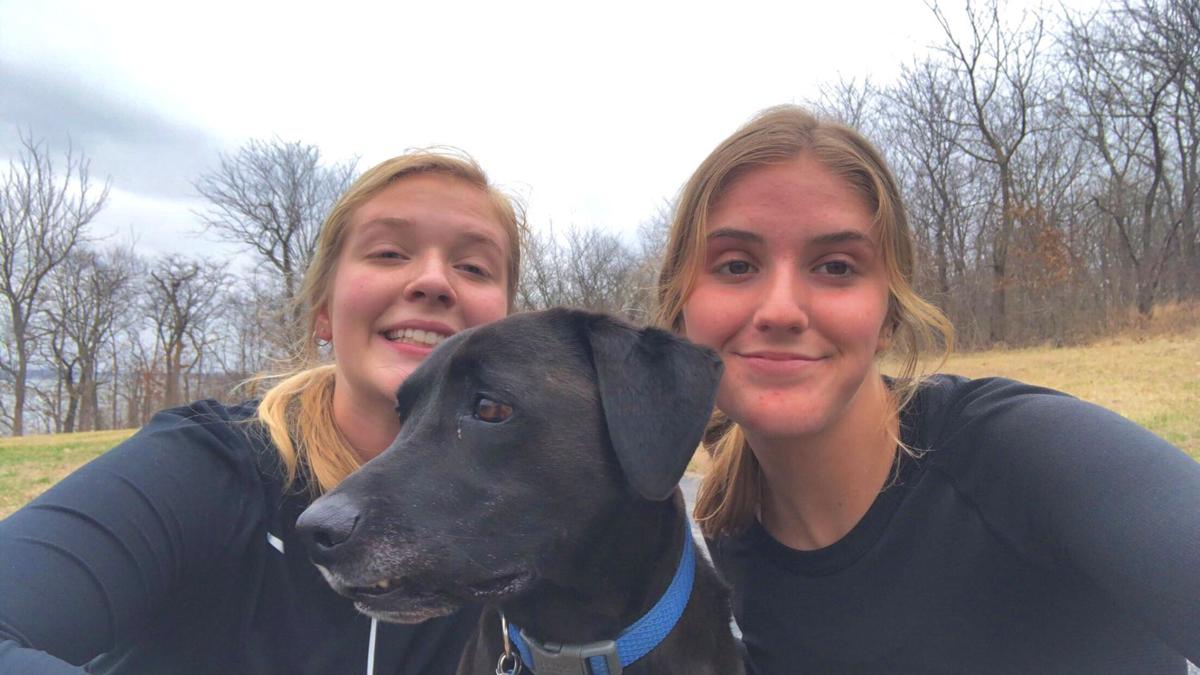 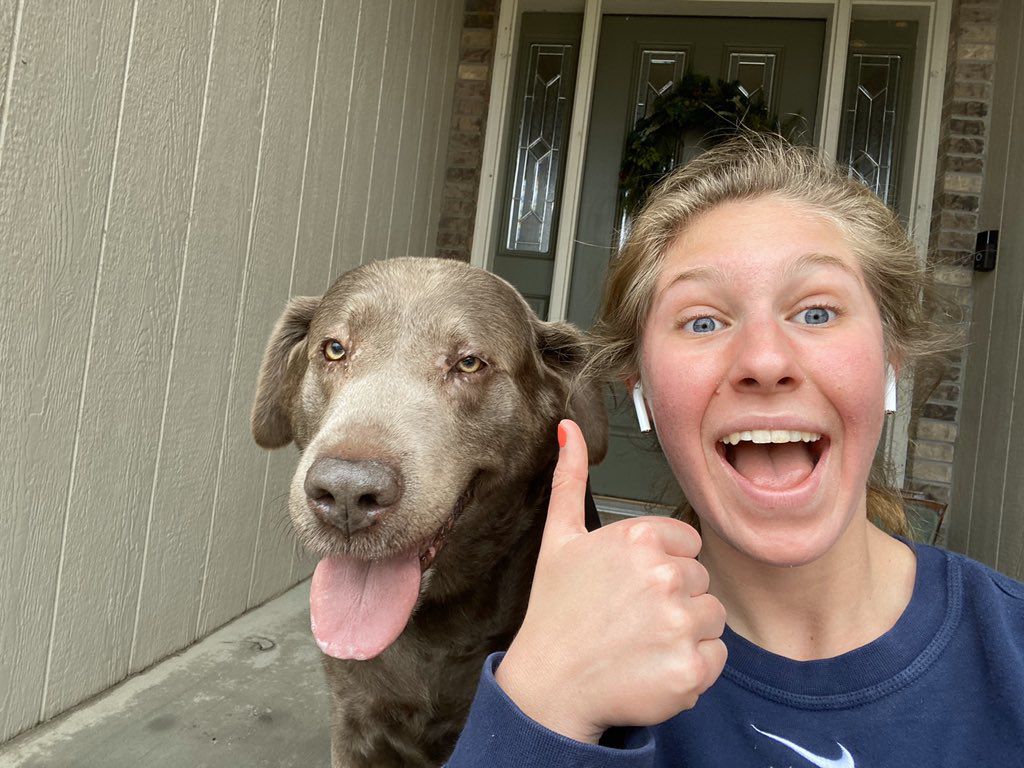 Liberty North soccer player Julia Johnson is one of three juniors who spearheaded a social media initiative by the Liberty North girls soccer team. Johnson is pictured here during a game against Liberty in May 2019.

Liberty North girls soccer coach Steve Person runs down a gravel road for his workout that he posts to social media to inspire his team to keep practicing on their own as schools remain closed through at least April 24.

Liberty North junior soccer player Ella Trinidad poses with her dog Ollie after she finishes a workout on March 17.

LIBERTY — The Liberty North girls soccer team had the opportunity for just one team practice over spring break.

The Eagles tried to make the most of it, but it was hard to ignore the truth they knew was coming.

Not long after that practice concluded, Missouri schools officially closed through the end of March in response to the spread of the COVID-19 coronavirus, ending team practices for the duration of the closure. A week later, the return date got pushed back to April 24.

That one practice was all Person needed to spark an idea that would push his team and eventually the rest of the Liberty North student-athletes through tough circumstances that were out of their control.

His idea was fairly simple: the team should use technology to stay in communication and hold each other accountable for completing individual workouts.

The team had not even had enough time together to select captains but Person messaged his plan to the three juniors that he had already pegged as the team’s likely leaders in Ella Trinidad, Julia Johnson and Lauren Hinnenkamp.

“I figured if I could get some team leaders doing it, it would reach critical mass,” Person said. “Then it would just take on a life of its own.”

Person would even take the first step himself. He admits that he hasn’t been a regular exerciser lately but he got up the next morning and posted photos of his workout to Twitter.

“3.5 miles this morning,” Person said in a tweet. “What was your workout? #Control_What_You_Can_Control.”

Person’s post had a few photos of his head barely in the frame with gravel roads in the background. Another photo showed a couple cows that didn’t seem like they expected him to be there.

Members of the team followed his example, although the first series of posts included dogs instead of cows and no underscores in the hashtag.

“We just wanted to work out and stay in shape in case April 24 rolled around and we were cleared to play,” Trinidad said. “I think Person got that message across and then all of the positivity just spread.”

Players started to replace photos with videos of themselves completing soccer drills that resemble the ones Person told his players to find on YouTube and use as templates for their individual workouts. Some players used the time-lapse feature on their phone to post a sped up version of their full routine.

When players had to decide who had the best video, there was little hesitation as each replied that sophomore Madeline Monaco won with her video on TikTok, a platform that focuses on creative short videos.

Monaco turned her workout post into a personal hype video, complete with jump cuts between various drills and the track “All the Way Up,” by Fat Joe and Remy Ma playing in the background.

“I know that has gone around,” Johnson said, explaining that teammates have praised Monaco’s video and others that show an extra bit of creativity. “But I think at the end of the day, it’s more about all of us coming together.”

The camaraderie spread past the varsity team, first to the junior varsity squad then down to the freshmen. Before long, other sports had followed the trend.

The Liberty North football team’s twitter account, which is also the handle used for the school’s weights classes, retweeted videos from the girls soccer team and started to post workout videos when virtual classes resumed this week.

“Rise and shine North Nation, time for workout No. 1,” Eagles head football coach Greg Jones said before he belted out a cock-a-doodle-doo in a video posted at 7:17 a.m. Monday, March 23.

Person said he was amazed by the reach of his team's posts.

When this started, he was retweeting videos from Beast Mode Soccer, an account with 32,000 followers, to give his team ideas for drills. Now, that account has retweeted some of the Eagles workout videos.

ladder and stairs for cardio and did an abs workout. did a little warm up with the ball + 45 minutes of ball work (shooting, skills, trapping out of the air, and dribbling)!! #controlwhatyoucancontrol @LNEagleWSoccer pic.twitter.com/28C8Q9PInO

“I think it’s cool to see,” senior Gabby Burns said. “It makes me feel like we’re doing something while we’ve not really been able to do anything.”

Most of the team has tried to prepare for the possibility that this season might not happen and that all their hard work could be building toward next year.

But Burns, the team’s lone senior who plans to play basketball at Quincy University this fall, is just hanging onto the hope that schools will open in time for her to return to the soccer pitch for one last game.

“I’d give anything to be able to get out on the field for one game,” Burns said. “If they canceled (the season) after that game, then great, I got to play one more time.”