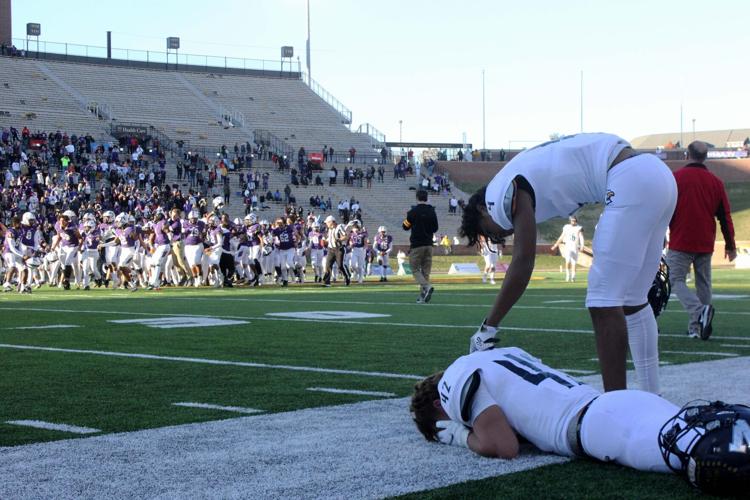 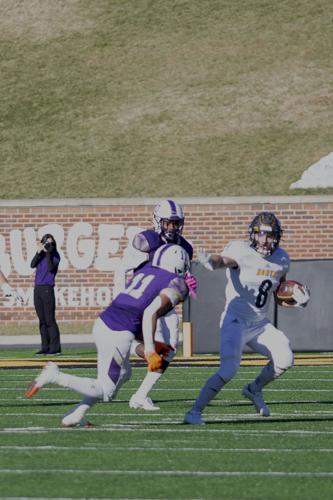 Liberty North's Cayden Arzola rushes with the ball against CBC in the Class 6 State Championship game on Saturday, Nov. 27. 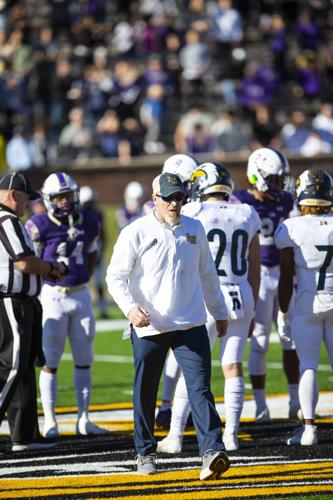 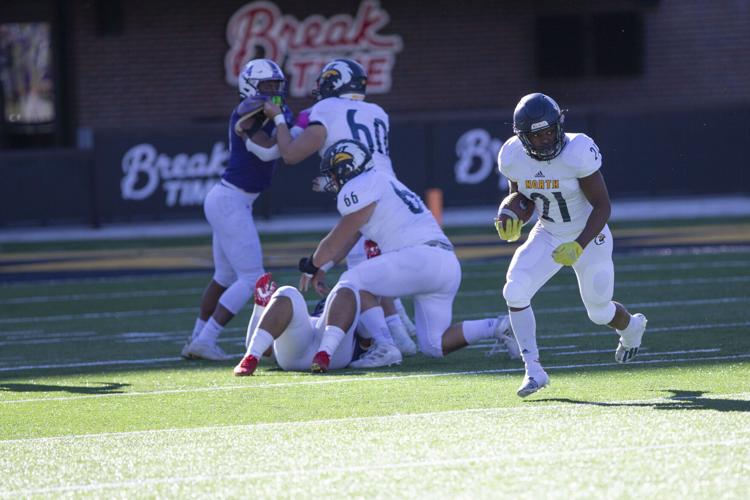 Liberty North's Cayden Arzola rushes with the ball against CBC in the Class 6 State Championship game on Saturday, Nov. 27.

COLUMBIA — When an outcome doesn’t go the way that you want, you lean on each other for love and support. That’s what happened to Liberty North after their loss in the Class 6 State Championship game against Christian Brothers on Saturday, Nov. 27.

The clock hit zero and tears filled the eyes of players and coaches as they saw their team fall 48-21. The Eagles came so close, but couldn’t finish the job against the Cadets. However, in those closing moments, that’s when Liberty North’s strong brotherhood was seen. Each player helped each other up, consoling one another and making each other feel seen.

“I appreciate the heck out of them, I love them to death,” head coach Greg Jones said. “Today just wasn’t our day.”

The day started positively for the Eagles as CBC’s quarterback Patrick Heitert threw an interception on the first possession. Heitert went back to pass and sat in the pocket, throwing straight to Liberty North’s Matthew Hutson. Heitert was unfazed after throwing the opening interception, he shared in a post-game press conference.

“It set us back a little bit, but we also know that we kind of messed up on that play,” Heitert said. “We didn’t really think they earned it. (Jeremiah McClellan) said he kind of slipped. We knew we could get back to that route.”

The Eagles could not capitalize on the interception. The Cadets held the Eagles for a field goal try, but it was no good. The following drive saw CBC’s Jeremiyah Love take the ball for a 62-yard rushing touchdown to open the scoring.

Liberty North would get the ball back, but quarterback Sam Van Dyne’s pass was tipped and caught for an interception by Kendall Hutson. This set up CBC for an 8-yard touchdown pass by Heitert.

Down 14-0, the Eagles would respond on the following drive. Van Dyne found Freddie Lavan for the 36-yard touchdown in the middle of the field. It was a gorgeous pass that brought the Liberty North crowd back into the game.

In the second quarter, the tide started to turn for the school from St. Louis. Van Dyne overthrew a pass on third down to CBC’s Justus Johnson. The cornerback took the intercepted pass 55 yards to the house for the touchdown. On the following drive, Van Dyne missed his target again and it found the hands of Tyler Gant. CBC would capitalize, leading 23-7 halfway through the second quarter.

CBC would head into the halftime break leading 31-7 after a high snap by the Eagles gave way to an easy fumble recovery for the Cadets.

The second half wouldn’t open up too kindly to the Eagles either. Cayden Arzola fumbled on the opening play of the third quarter as CBC’s Michael Teason recovered and brought it into the end zone to the dismay of the Liberty North faithful. CBC would lead 38-7 as Liberty North scored on the following drive.

Arzola redeemed himself with a 7-yard touchdown that was all will and strength as he kept his legs churning into the end zone. Liberty North’s defense would get the stop and the offense was back on the field halfway through the third quarter. It was Micah Jo Barnett’s turn to score for the Eagles. His 7-yard run propelled the Eagles to only trail 41-21.

A touchdown by CBC sealed the game as Liberty North bit on the play action call with 8 minutes left in the fourth quarter. The following possession, Van Dyne would fumble the ball and it would be picked up by CBC to secure the win.

The Eagles turned the ball over six times against CBC; three fumbles and three interceptions. CBC would score 31 points off the turnovers in the championship game.

“When you turn the ball over as many times as we did today, I think we turned it over more times today than we have all season,” Jones said. “Uncharacteristic of us.”

The characteristics of Liberty North are a team that plays for and loves each other. That was fully on display when Jones, Justis Braden, Aiden Anderson, Van Dyne and Myles Sigers shared in an emotional press conference that talked very little about the game.

“There’s not another team I would rather be here with,” Jones said.

“There’s not another group of guys I would want to spend my time with for the past seven months,” Braden said. “I love all of them.”

Each player looked at one another and then toward their coach, their leader and the one they leaned on the most.

“I wouldn’t want any other coach. Going in as a freshman, you hear he’s a big scary guy,” Anderson said. “Sophomore year, you get to know him a little bit. And once you get to play, he’s actually a pretty good guy, especially off of the field.”

Off of the field is what Sigers will miss the most. His relationship with Jones is more than the time he has with him between the hash marks.

“He’s the type of guy to involve the sports with real life lessons,” Sigers said. “He’s more than just a football coach, he’s a life coach.”

The game was hard to swallow, but there was much to be proud of as part of North Nation. For the first time, a team representing Liberty played in a state championship game. That is what is going to be remembered, not the turnovers, but the journey to something never accomplished before while building a season full of brotherhood and bonds that will last a lifetime.

“They showed all the kids in our town that they can do it,” Jones said emotionally. “I’m so proud of them.”