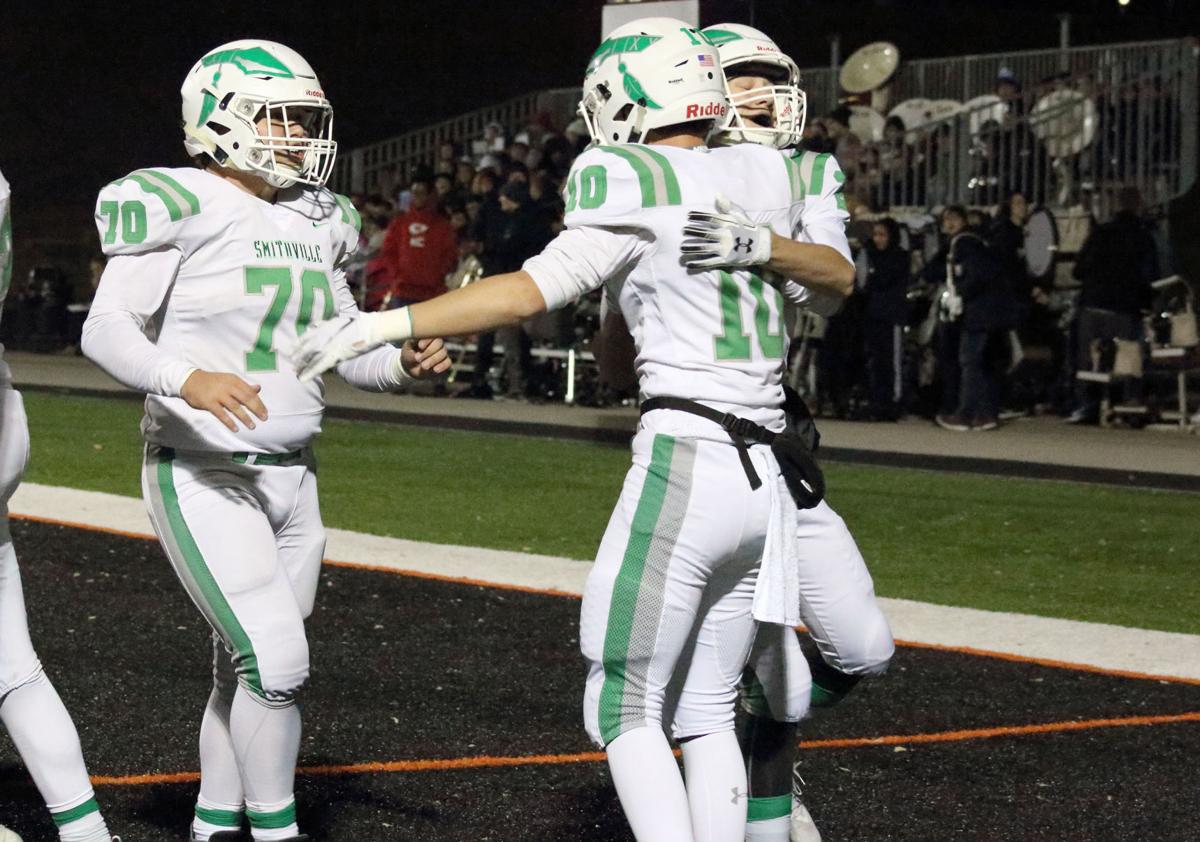 Smithville receiver George Fisher is congratulated after scoring a touchdown in the first quarter of the Warriors' loss to Platte County Friday, Nov. 8, in Platte City. 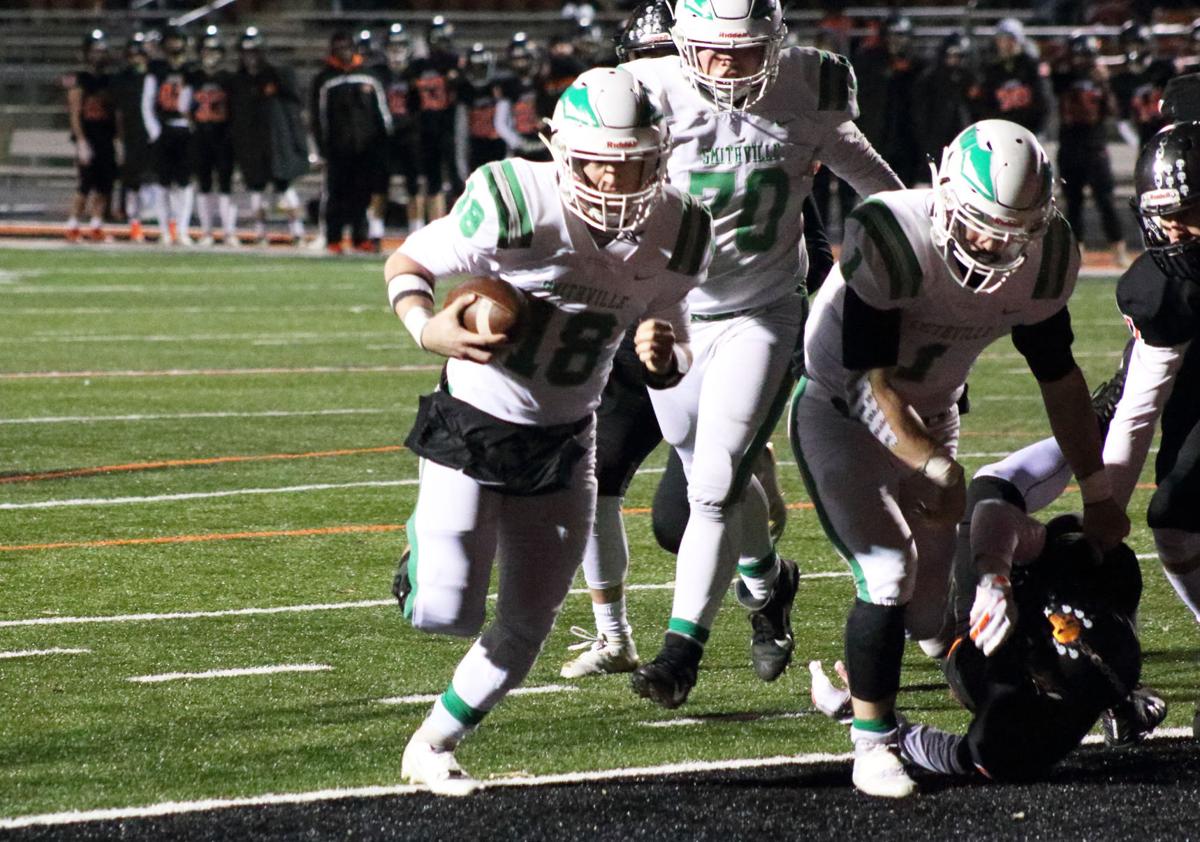 Smithville’s Spencer Miller scores to put the Warriors up 13-0 against Platte County Friday, Nov. 8, in Platte City. Platte County came back to win the contest to advance to the district championship. 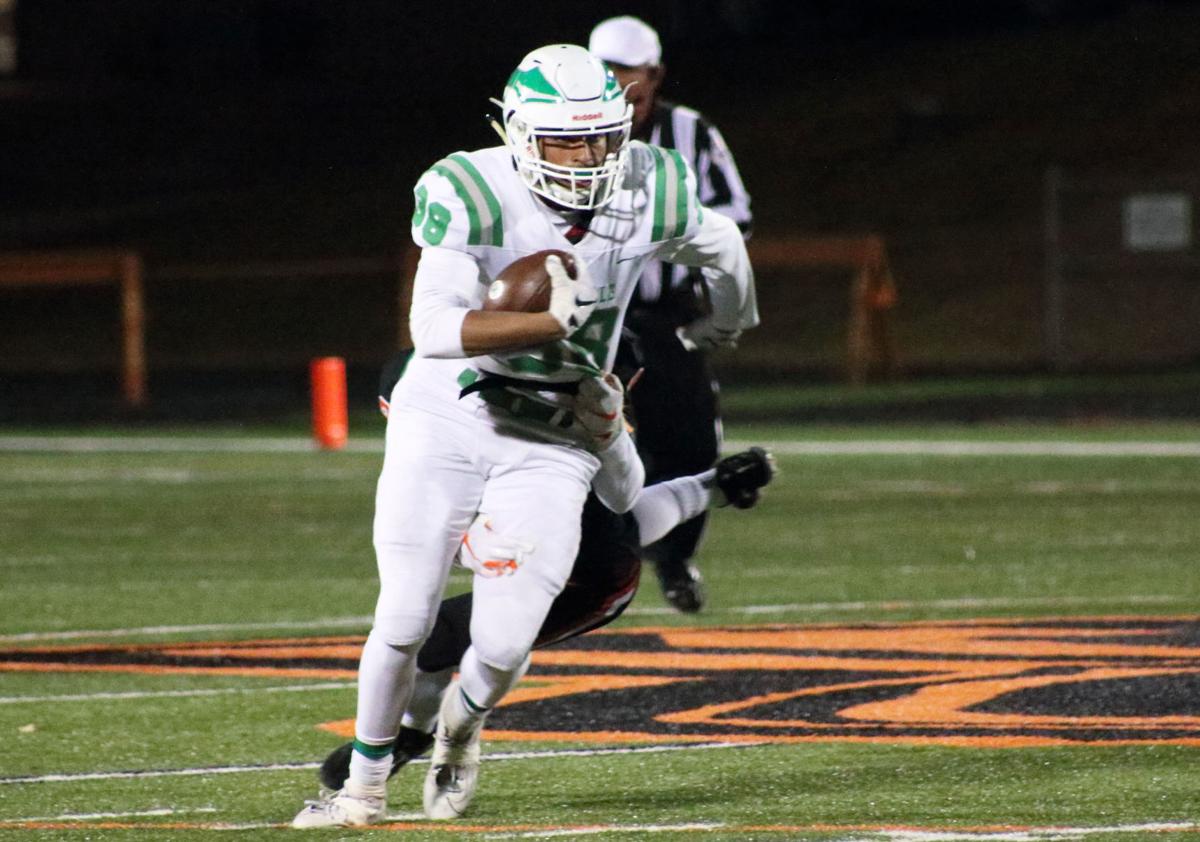 Smithville receiver George Fisher is congratulated after scoring a touchdown in the first quarter of the Warriors' loss to Platte County Friday, Nov. 8, in Platte City.

Smithville’s Spencer Miller scores to put the Warriors up 13-0 against Platte County Friday, Nov. 8, in Platte City. Platte County came back to win the contest to advance to the district championship.

PLATTE CITY — After getting blanked in the first meeting of the season, Smithville took Platte County down to the wire Friday, Nov. 8, in the Class 4 District 8 semifinal round.

Platte County came out victorious and completed the 2019 sweep of the Warriors with a 23-20 win at home.

“It means growth, I think that’s the most important part,” Smithville coach Jason Ambroson said on his team’s performance on Friday compared to the first meeting between the two teams.

“Honestly, they beat us that night,” Ambroson said. “They were a better football team, hands down.”

The Warriors came out ready to go on Friday, though, as they flipped the script from the first meeting and took a 13-0 lead into the second quarter of play.

“We started out pretty fast, probably the first half was really good football on our part,” Ambroson said. “We made a couple mistakes, I thought we maybe left another touchdown on the board. But, you have to give credit, Platte County is a very good football team and football program and has always been.”

Spencer Miller completed a 26-yard pass to George Fisher with 5:47 left in the first quarter to give Smithville a 7-0 lead.

Miller then ran one in with 2:24 left in the quarter to put the Warriors up 13-0 after a two-point attempt failed.

Platte County opened and closed the second quarter with field goals by Grant Allen to make it 13-6 at the intermission.

“I thought we played very well in the first half and were kind of on script for where we wanted to be and the place we wanted to be at halftime moving forward and head into the locker room feeling pretty good,” Ambroson said.

The Pirates leveled the game in the third quarter, intercepting Miller to knot the score at 13-13 with 6:43 left in the third.

Smithville took back the lead with 11:07 left in the fourth on a one-yard Isaac Miller run to make it 20-13.

Platte County, however, closed the game on a 10-0 run in the final 11 minutes to end Smithville’s season.

Trey Phan ran in a touchdown from eight yards out with 7:38 left before Allen connected on a 20-yard field goal attempt to give the Pirates their final lead of the night.

“I think what it showed is that there were two really good football teams that played last night and one of them, you know what, I felt like we ran out of time,” Ambroson said. “But that is why they have a clock.”

“It really comes down to losing a possession there in the fourth quarter where we had to punt one away as opposed to keeping the ball and if we had gotten a first down there, I think it’s a different outcome, but you know when you play good football teams, you can’t make mistakes,” Ambroson said.

The Smithville coach praised his team’s growth this season after inserting a number of new starters into its game plan.

“Our kids did not look at it as a rebuilding opportunity, they looked at it as an opportunity to play football and be a good football team,” Ambroson said. “They came out and played great football.”

Platte County will play for a district title at 7 p.m. on Friday, Nov. 15.

“I am not happy with a loss and I know they are not either because we went over there to win and we felt like we played well enough to win,” Ambroson said. “At the same time, we have a lot of things to be proud of as Smithville Warriors and I am very proud to coach my kids. I love every one of them.

Managing Editor of Digital Publishing Derek Brizendine can be reached by emailing derek.brizendine@dsjnow.com.