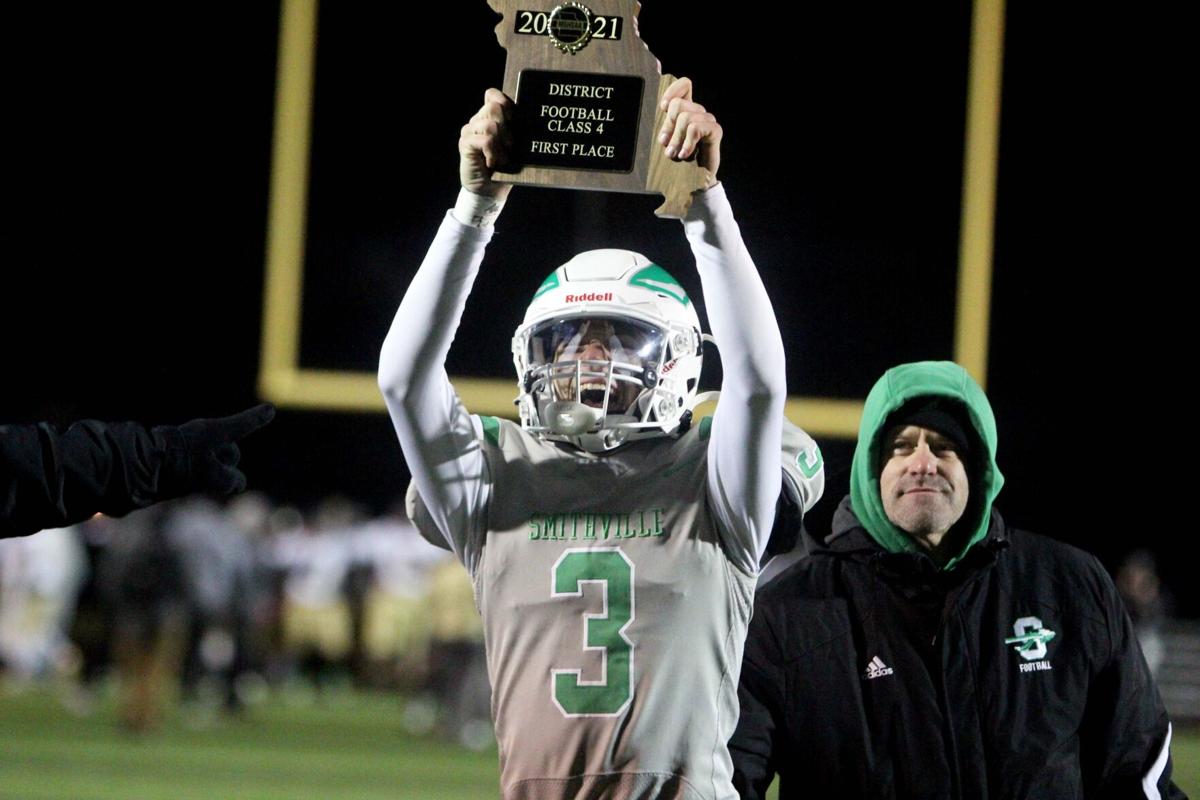 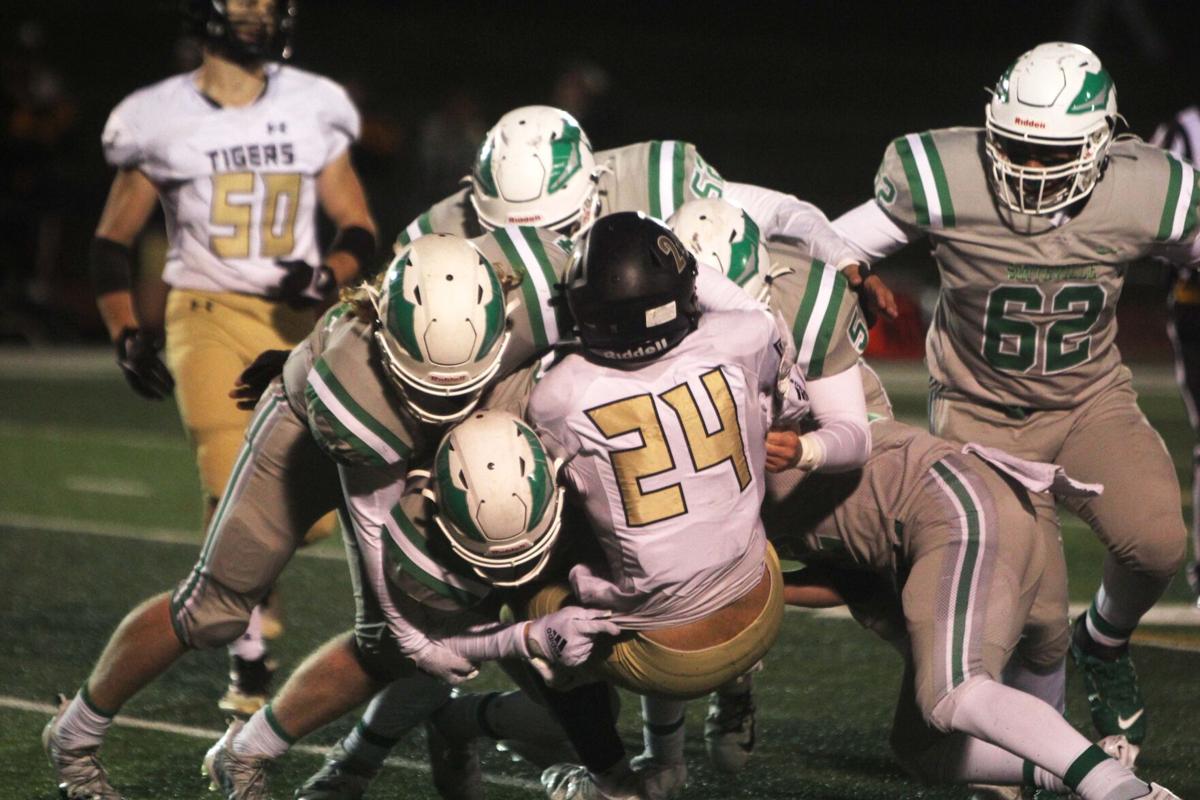 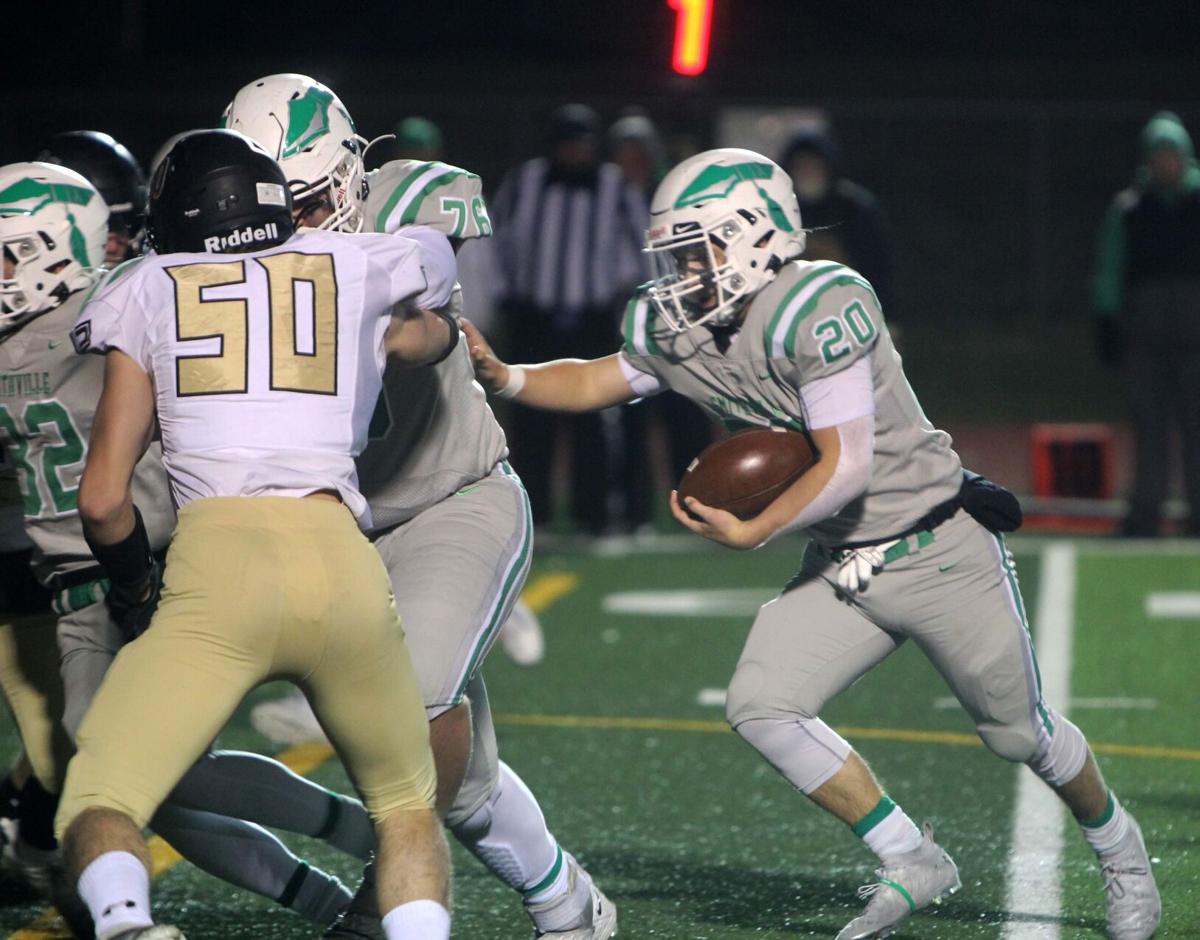 SMITHVILLE — Practice makes perfect, especially when you face a team with a system you have never seen before. That’s what was facing Smithville in the Class 4 District 8 Championship game against Excelsior Springs.

Even though Excelsior Springs showed multiple sets of wishbone, triple option and many others, the Warriors defeated them 52-10 in utter dominance. It was the team’s prep throughout the week that helped secured the win according to quarterback Andrew Hedgecorth.

“We go ones-on-ones for both offense and defense and we give each other the best look we can,” Hedgecorth said. “Half the time, I’d say, when we come into the game, we run it better than they do. That gives the defense the opportunity to execute to a tee.”

The defense shined, only allowing three points in the first half with the Tigers’ touchdown coming in the closing minutes of the fourth quarter.

The game opened in a quick three and out for Excelsior Springs, but a bobble from the punter and Smithville was ahead 2-0 after the safety.

The quick start helped control the tempo for the Warriors and allowed for their offense to punch in a 6-yard touchdown by Caleb Donnell.

“With what they do, if they get behind, it’s hard on them,” Ambroson said. “Us getting ahead helps us, but it was a huge challenge.”

Donnell, Preston Rash and Ayden Ambroson all filled in at the running back position each scoring a touchdown for Smithville. The trio of backs will be asked to carry the ball in a running back by committee-style as star running back Hayden Sigg was injured in last week’s game against Kearney. Sigg will miss the rest of the season with an injury, but his presence is still felt.

“He goes and gets an X-ray and knows he done for the year,” Ambroson said. “He’s the first one here on Saturday morning for video. He’s been at every practice, every meeting. He is still an important part of this team and an incredible role model, too.”

Sigg finishes 2021 with over 1,000 yards rushing for the second year in a row. He also punched in over 15 touchdowns to help his squad.

“Nobody wanted to see him get hurt. Everyone on this team loves him,” Hedgecorth said. “Everything we do from here on out is for him and will always be for him.”

Hedgecorth was brilliant once again for the undefeated Warriors. A long touchdown pass to Rhett Foster gave Smithville a commanding 16-0 lead at the end of the first quarter.

Hedgecorth’s passion for the game and willingness to learn make him an asset to the Warriors.

“He has a distinct desire to be good,” Ambroson said. “The nice thing about it is that he wants to share it with his teammates.”

Smithville will move on to the Class 4 State Quarterfinals against Lincoln College Prep next Friday. The Blue Tigers defeated Nevada 41-18 and enter the game undefeated as well.

Per usual, the Warriors will be well prepared, starting with work in the film room and on the practice field. Smithville earned the Class 4 District 8 championship trophy, but their sights are on something else.

“We want the big one,” Hedgecorth said.