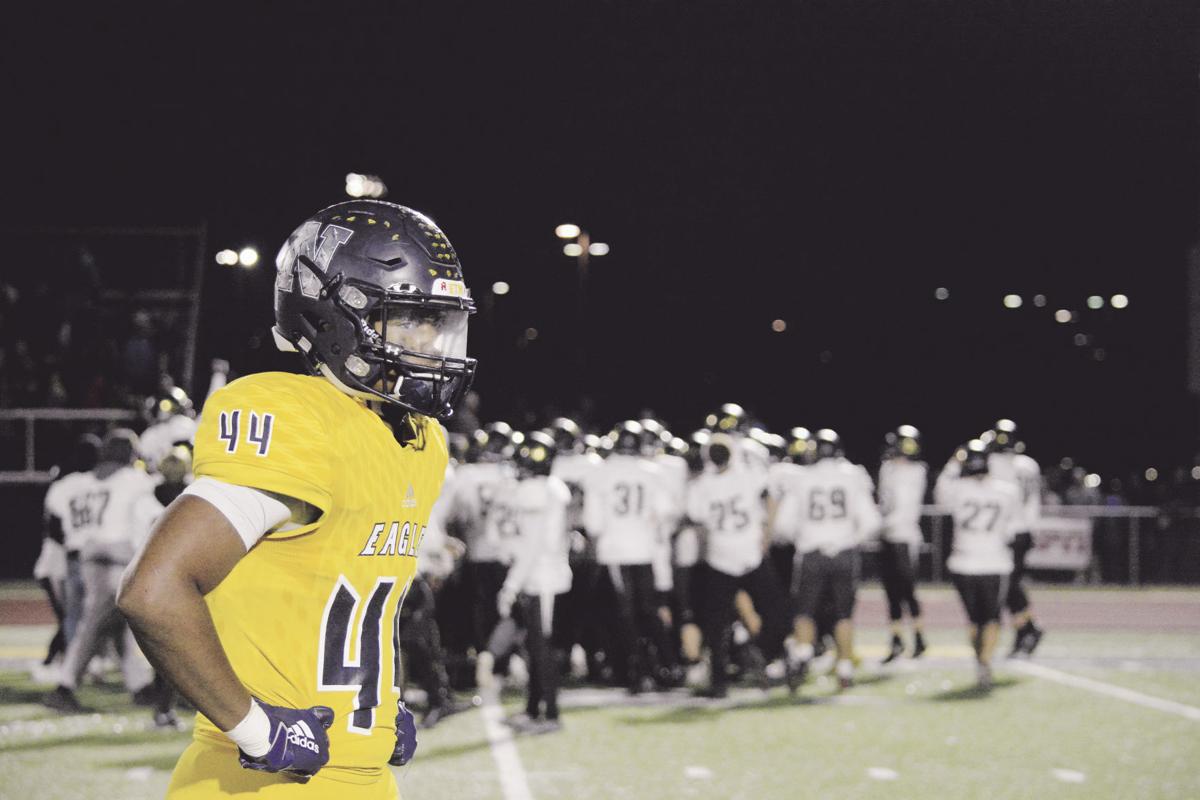 Liberty North senior Keshawn Turner walks off the field as Raymore-Peculiar players celebrate in the background after the Panthers’ upset the Eagles 27-21 in the Class 6 District 4 championship game Friday, Nov. 15 at the Crossley Family Activity Center. 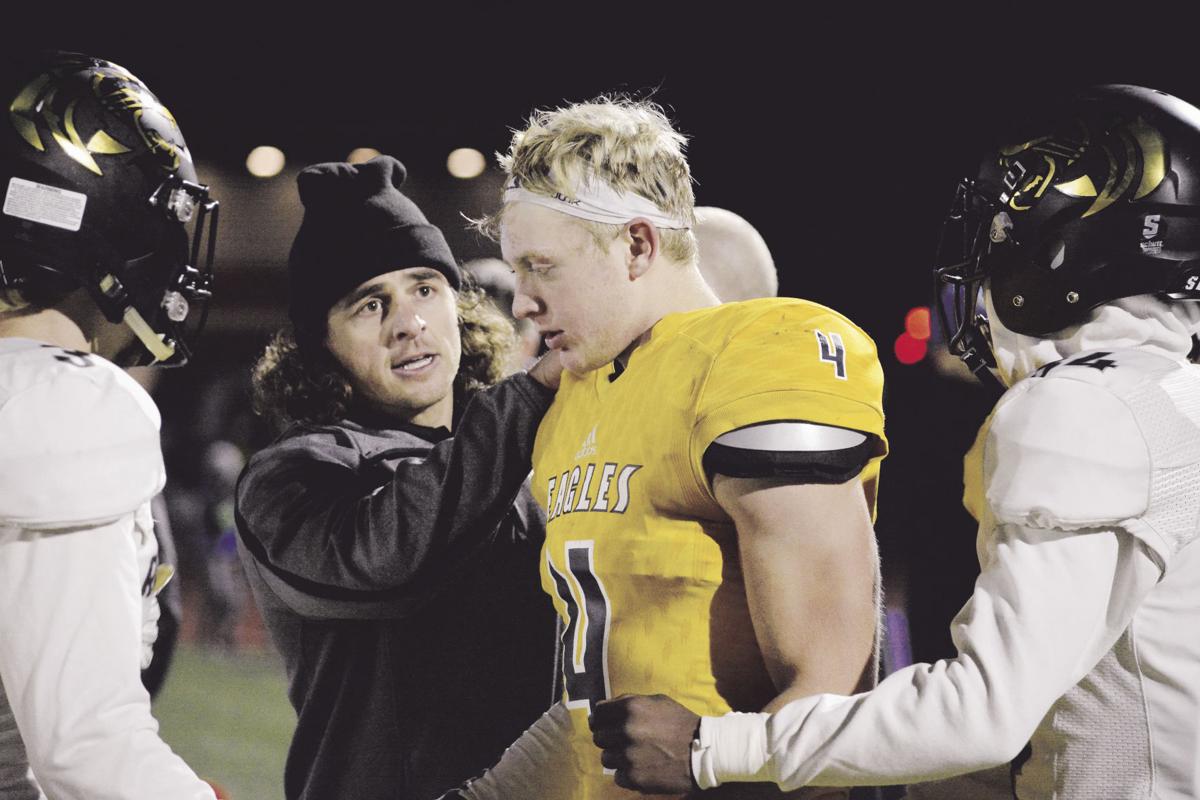 Liberty North senior Garrett Linn is congratulated by members of the Raymore-Peculiar team in the postgame handshake line after the Panthers upset the Eagles 27-21 Friday, Nov. 15. 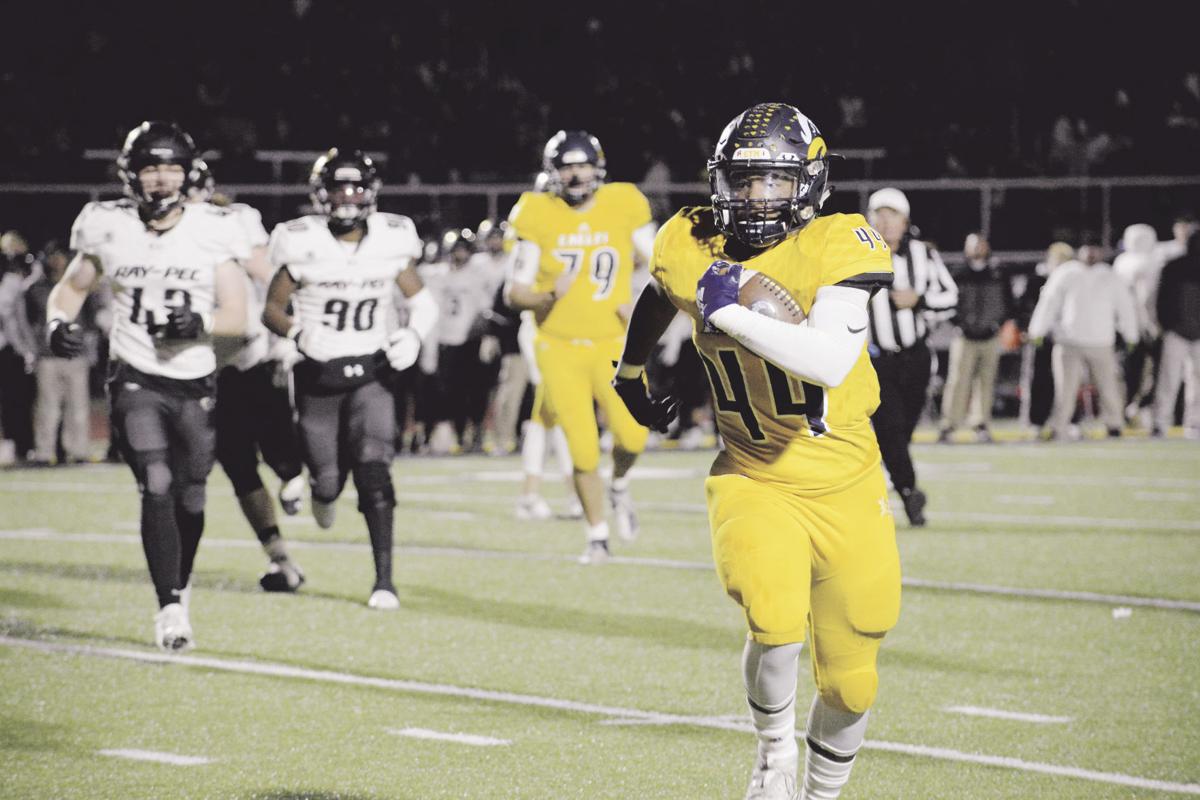 Liberty North's Keshawn Turner makes his way to the end zone for a touchdown run during the Eagles' district championship loss to Raymore-Peculiar Friday, Nov. 15. 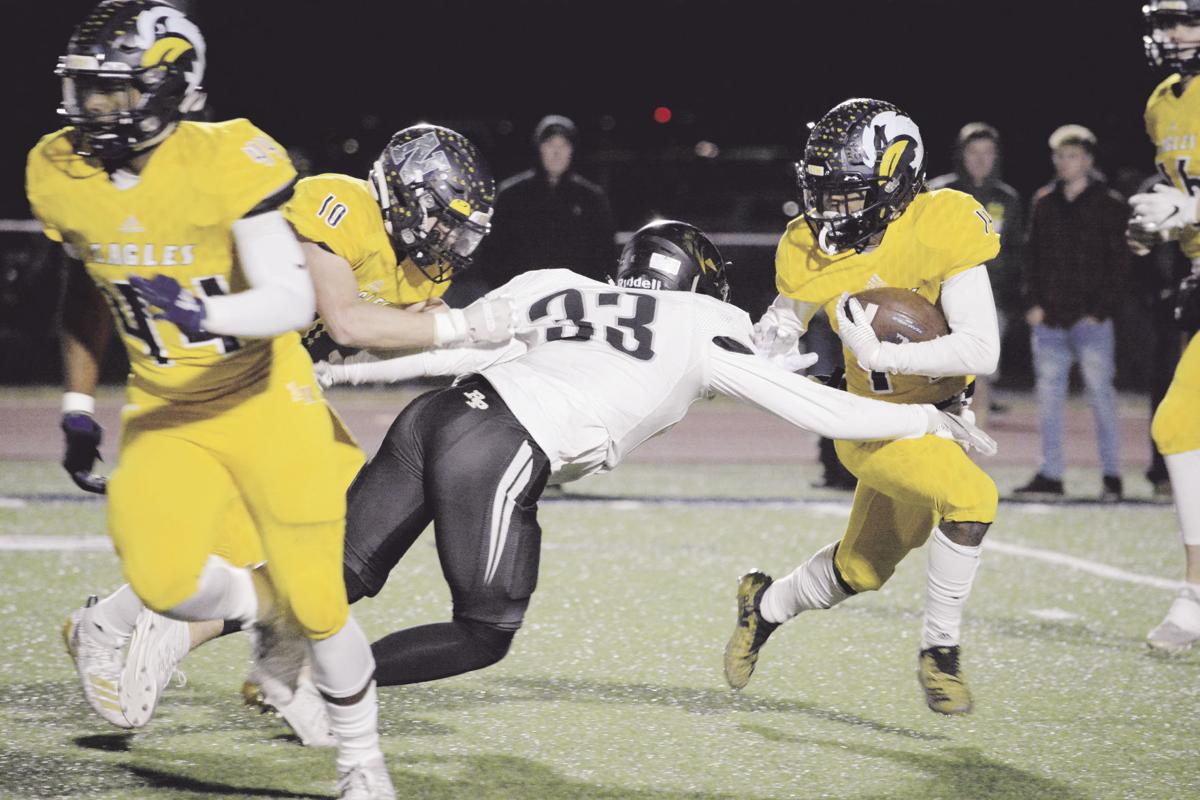 Liberty North senior Keshawn Turner walks off the field as Raymore-Peculiar players celebrate in the background after the Panthers’ upset the Eagles 27-21 in the Class 6 District 4 championship game Friday, Nov. 15 at the Crossley Family Activity Center.

Liberty North senior Garrett Linn is congratulated by members of the Raymore-Peculiar team in the postgame handshake line after the Panthers upset the Eagles 27-21 Friday, Nov. 15.

Liberty North's Keshawn Turner makes his way to the end zone for a touchdown run during the Eagles' district championship loss to Raymore-Peculiar Friday, Nov. 15.

LIBERTY — Greg Jones didn’t have much to say to his team after a gut-wrenching loss.

To the Liberty North football coach, there were no words that could accurately describe the feelings of the current situation.

Because what the previously-undefeated and No. 2-state ranked Eagles felt on Friday, Nov. 15, was something they had yet to experience this fall.

A loss. And this loss promptly ended a season. No more undefeated talk. No more state championship aspirations. Just a new feeling.

After an even first half, No. 6 Raymore-Peculiar put together a scoring drive in the final minute to shock the home crowd, culminating with a Phillip Fager 8-yard touchdown run with 18 seconds left to cap a 27-21 victory over the Eagles in the Class 6 District 4 championship game at Crossley Family Activity Complex.

“It just hurts like hell because these kids played their rear ends off,” Jones said. “There’s no magic words. I just told them that I loved them and that I’m proud of them. It was a helluva year.”

The loss, of course, was the Eagles’ first as they ended the season 11-1.

When asked about the loss, Jones recalled a meeting that he had with 26 seniors earlier that day.

“The higher you get up in the tree, the more it hurts when you fall,” Jones said before choking up. “It’s a great, great senior group. They changed the whole mindset; the whole mentality of the football program around here.”

Instead, after a 21-21 halftime deadlock, the Panthers (10-2) held the balanced Liberty North offense scoreless in the second half and scored on their final drive to shock the Eagles.

“I felt like we came out here and played our hearts out,” Liberty North receiver Warren Bennett III said. “Unfortunately we didn’t have the ending that we wanted, but it was a great season and we can’t really take anything back now.”

The ending involved a blanking in the second half, courtesy of a Raymore-Peculiar stingy defense.

The Eagles’ defense was just as good before Fager’s dagger that left only 18 ticks left, only enough time for Liberty North to try and run a couple desperation plays on its end of the field.

When the clock hit all zeros, North’s season came to a screeching halt.

“You’re undefeated all year and then it’s tied up at halftime and then we just didn’t make plays in the second half and then they did at the end,” Jones said. “That’s just what it boils down to.”

However, much like most Eagles’ games this season, the game started with promise. Liberty North jumped out to a 14-0 lead with scores from Bennett (90-yard punt return) and Keshawn Turner (15-yard run).

The Panthers went on to score 18 unanswered points. In taking an 18-14 lead, Luke Grimm scored on an 18-yard run, Hudson Bailed hauled in a 31-yard touchdown pass from Conrad Hawley and Gage Sappington hit a 34-yard field goal.

The Eagles regained the lead on a Luke Mathews 19-yard TD catch from Jake Van Dyne 31 seconds ahead of halftime.

But the Panthers sneaked in a Sappington 26-yard field goal with five seconds left.

Defense dominated the second half, with the Panthers’ late-game score providing the difference and shocking the home crowd.

“They just big-played us,” Jones said. “We’re doing a good job of finally stopping the run and then they started hitting their one-on-one matchup they wanted. So good game-planning on their part and, like I said, it was a helluva game.”

Should Clay Co. Public Health Center require everyone to wear masks in public?