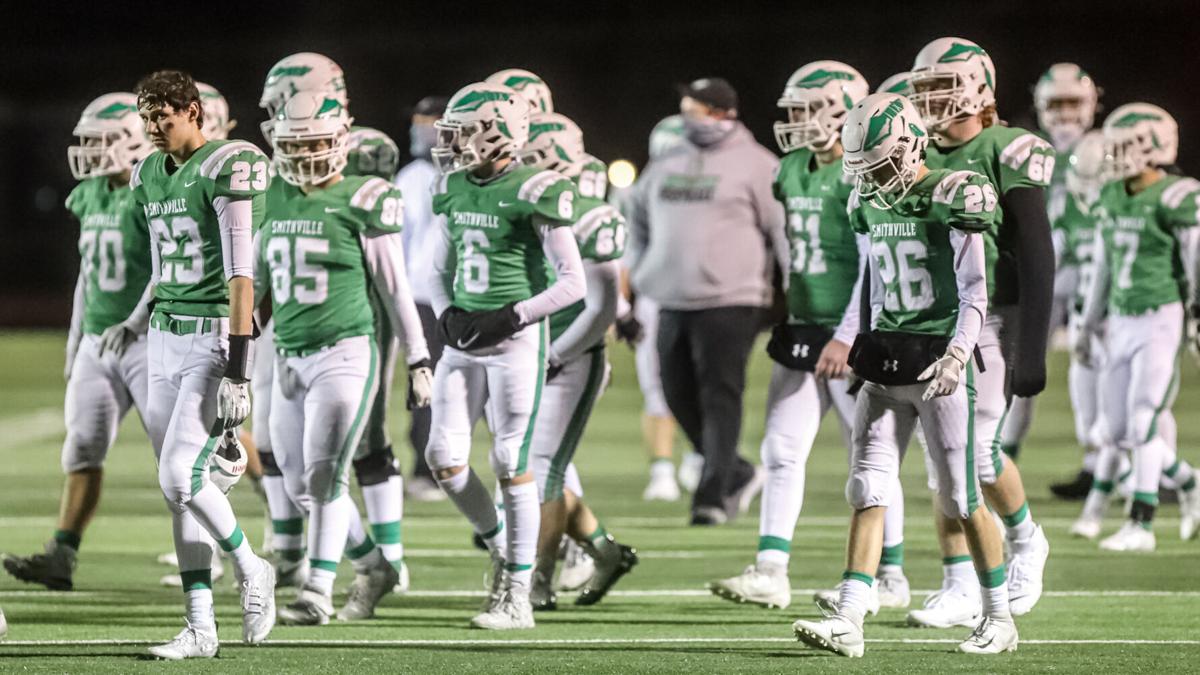 Smithville players walk toward the end zone after losing 13-10 to Helias Catholic when the Crusaders scored a last-minute touchdown Friday, Nov. 27 at Smithville High School. 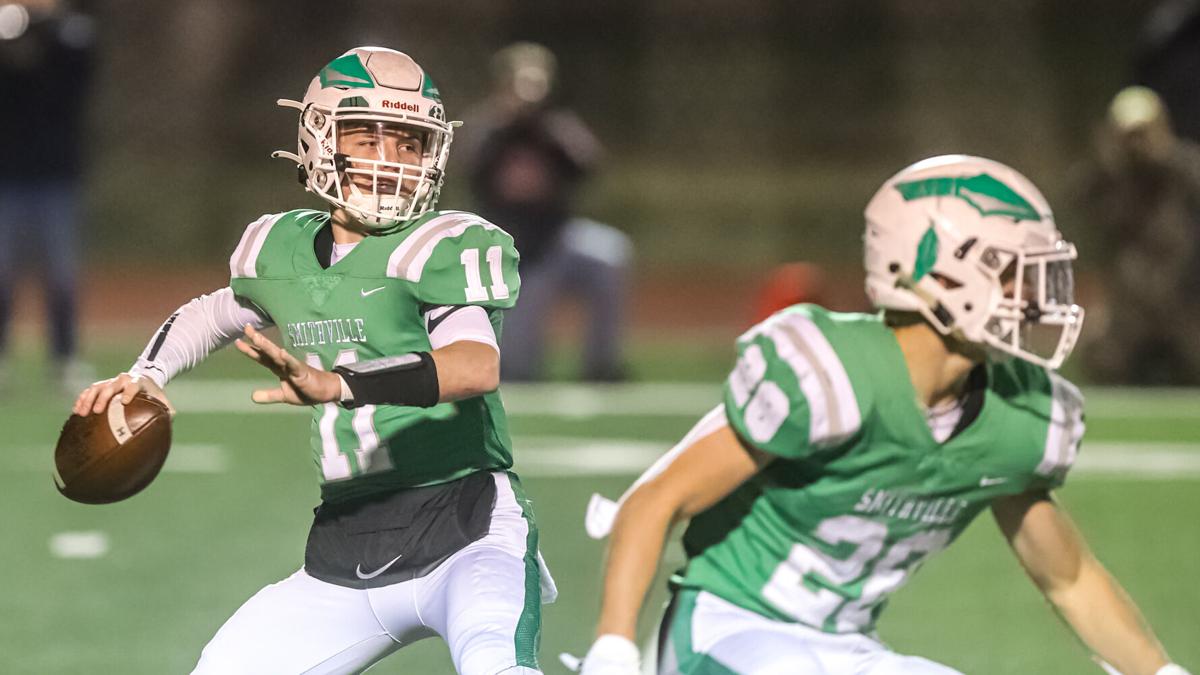 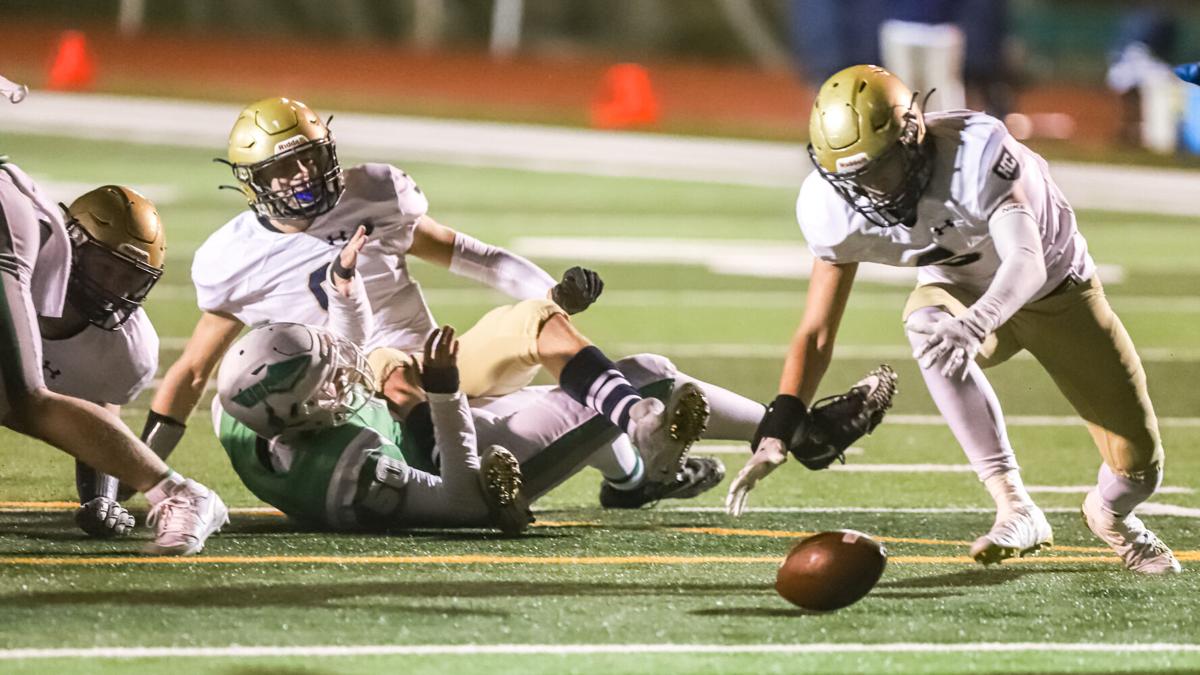 A Helias Catholic defender jumps on the ball after the Crusaders stripped the ball away from Smithville’s Hayden Sigg on the goal line during a Class 4 state semifinal game Friday, Nov. 27 at Smithville High School. 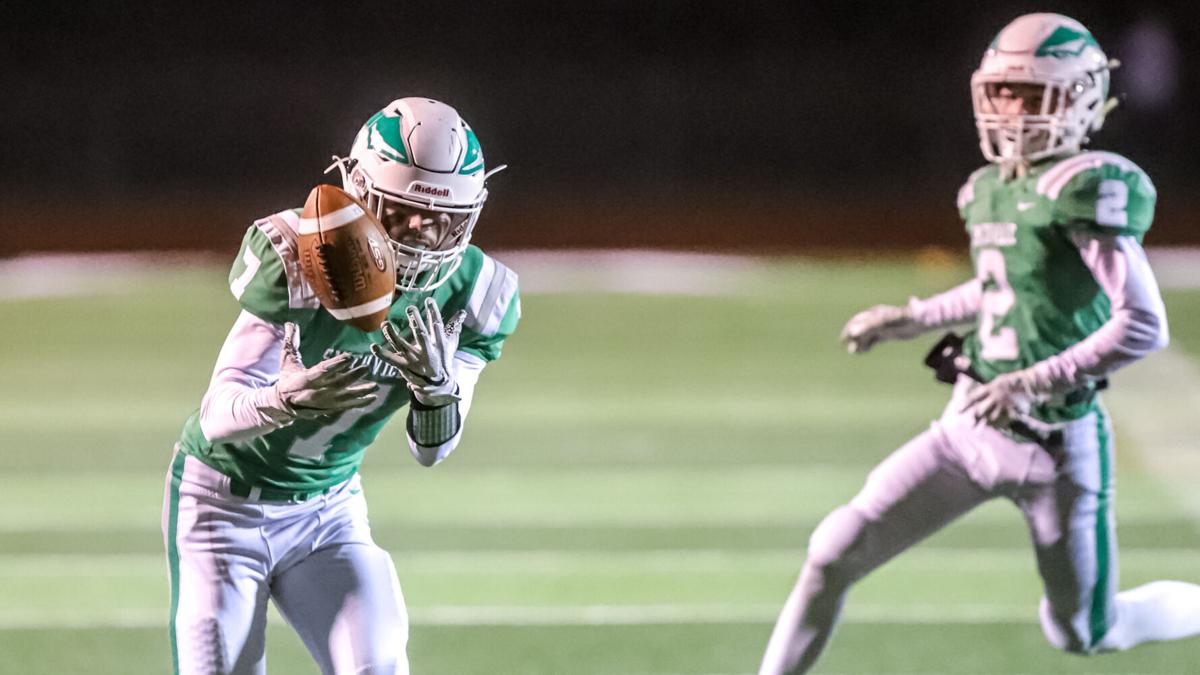 Smithville junior Noah Riecker bobbles the ball before ultimately pulling it in for an interception during a Class 4 state semifinal game Friday, Nov. 27 at Smithville High School. 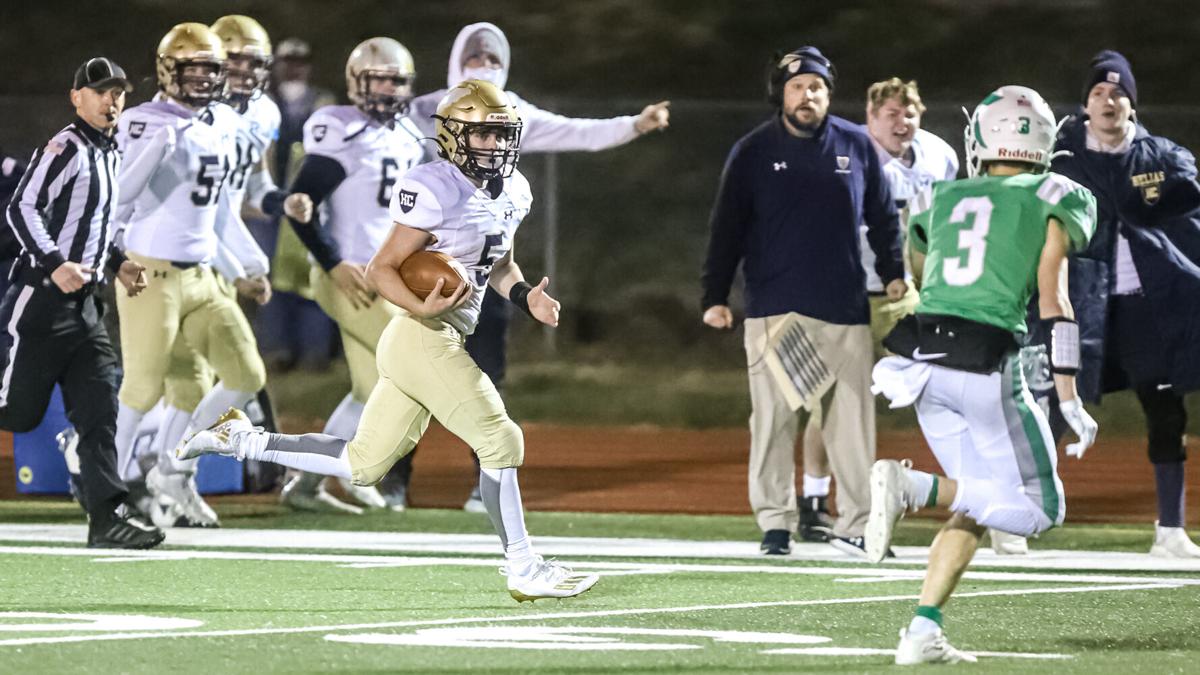 Smithville players walk toward the end zone after losing 13-10 to Helias Catholic when the Crusaders scored a last-minute touchdown Friday, Nov. 27 at Smithville High School.

A Helias Catholic defender jumps on the ball after the Crusaders stripped the ball away from Smithville’s Hayden Sigg on the goal line during a Class 4 state semifinal game Friday, Nov. 27 at Smithville High School.

Smithville junior Noah Riecker bobbles the ball before ultimately pulling it in for an interception during a Class 4 state semifinal game Friday, Nov. 27 at Smithville High School.

SMITHVILLE — Smithville football did not trail for the first 47 minutes and 28 seconds of its Missouri Class 4 state semifinals game.

But everything changed as Helias Catholic scored the go-ahead touchdown with under a minute to play to beat the Warriors 13-10 Friday, Nov. 27, at Smithville High School.

“We didn’t finish it,” senior lineman Micah Palmer said. “A couple plays cost us. We could have done better on some things, but they were a really good team over there and they’re going to make some plays, too.”

The Warriors had a 10-6 lead with 6 minutes remaining. Smithville marched down to their opponent’s 20-yard line before the Crusaders defense put the clamps down to force a fourth-down play.

Instead of opting for a field goal attempt to try to take a touchdown lead, the Warriors kept the offense on the field to try for a first down and seal the game with just over two minutes to play.

Helias Catholic made the stop to get one last chance.

Smithville head coach Jason Ambroson said it would probably be easy to look at the final score and say “go back and kick the field goals,” but he thought it was important to maintain possession and keep the offense on the field.

“We put together a game plan and did the very best job we could and we ended up coming up short,” Ambroson said. “That’s my responsibility to make sure we do better than that.”

The Crusaders were on the ropes early on the next drive with a third-down attempt after two incomplete passes, but quarterback Jacob Weaver took off for a 15-yard run for the first down.

Two plays later, he connected on a deep strike down the left sideline to running back Alex Clement, who slithered past two defenders before junior cornerback Keltin Nitsche wrestled him down at the Smithville 16-yard line.

Helias Catholic ran the ball a couple times before Clement took the ball in from 5 yards out to score the go-ahead rushing touchdown.

Smithville was unable to get the ball moving before opting for a hook-and-ladder play with the clock closing in on zero. The ball was fumbled and recovered by Helias Catholic to end the Warriors’ chances.

That’s how the game ended but not how it was decided.

Both offenses struggled as neither team scored until midway through the third quarter when junior linebacker Cody Simoncic tipped a passing attempt that wobbled to junior Noah Riecker, who intercepted it and returned the ball to the 10-yard line.

Smithville took advantage a few plays later as junior running back Hayden Sigg slammed head first into the defensive line before reaching across the goal line for a fourth-down rushing touchdown.

Helias Catholic immediately responded with Weaver connecting on a deep strike down the middle of the field to Cole Stumpe for a 57-yard touchdown reception. The Crusaders still trailed 7-6 after missing the extra point.

The Warriors added to their lead with a Noah Schuetz field goal on the next possession. Junior Cooper Ezzell set Smithville up in scoring position when he found an open lane on the kick return to gain 60 yards.

Smithville thought it had the game in hand after the defense took the Crusaders off the field again with a three-and-out halfway through the final frame.

The Warriors moved the ball from their own 40-yard line to the red zone once again, but the Crusaders made one last stop and made the most of their last drive.

“We played good for the first three quarters but we didn’t play good for the last quarter,” senior defensive end Zeke Waisner said. “That’s what counted.”

Smithville also had to overcome a heartbreaking start to the game.

Sophomore wide receiver/defensive end Dawson Strickland suffered a leg injury, which Ambroson indicated was presumed to be a broken leg, when he was tackled while attempting to haul in a reception toward the end of the first quarter.

Senior lineman Cole Kasten said it was really shocking and took a toll on him seeing his friend exit the game in that fashion. He described Strickland as “the friendliest kid you’ll ever meet.”

Palmer said it’s tough to lose a player like Strickland who brings so much effort both during the game and in practice.

“He comes in everyday and does more than he is supposed to,” Palmer said. “He’s a sophomore playing like a sixth-year senior it seems like. … It’s hard to lose a guy like that.”

“He wanted to talk to his teammates and tell them to go get it,” Ambroson said. “The way he handled the situation, I couldn’t be prouder.”

Ambroson said he was also proud of how the team handled a year that began with uncertainty as the COVID-19 pandemic threatened to cancel the fall season. Smithville finished the year 10-3 with a conference and district championship, the team’s second in three seasons after also reaching the state semis in 2018.

“We started this year not knowing what the future would bring and it turned into a really good group of kids that loved playing together,” Ambroson said. “You could see that by the way they played out here.”