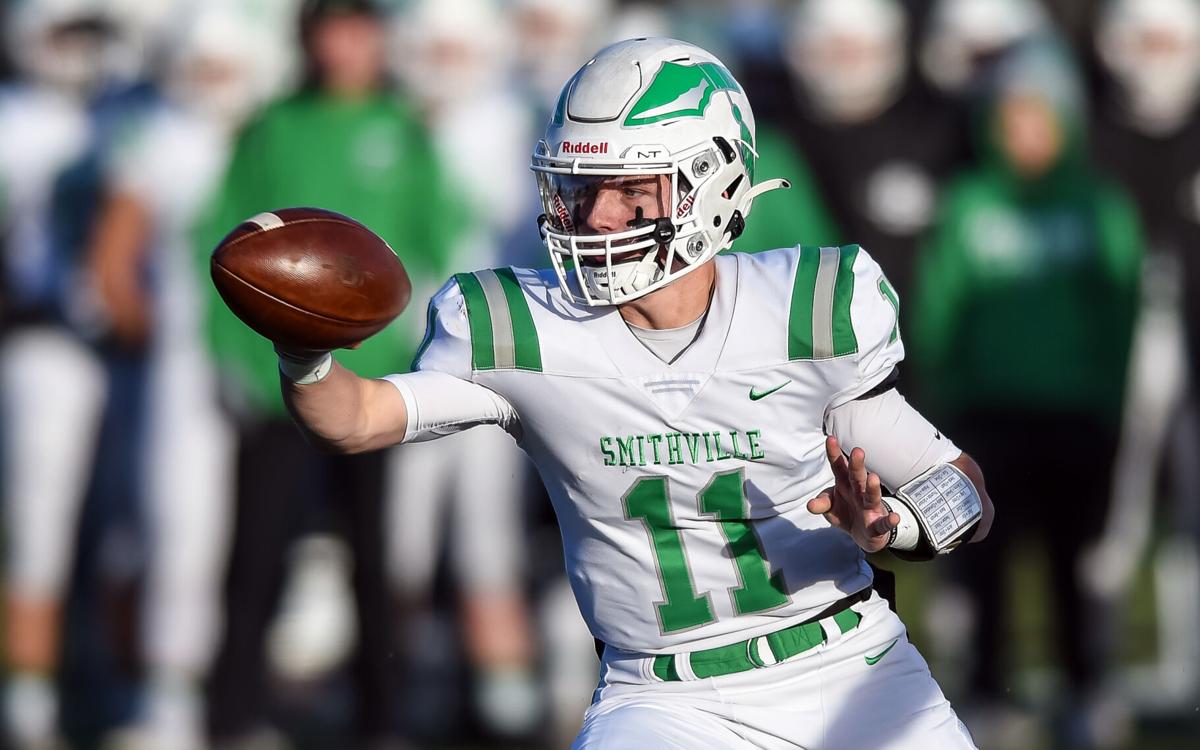 Smithville’s Andrew Hedgecorth pitches on a counter play during a Class 4 Semifinal football game against MICDS on Friday, Nov. 26, 2021, at MICDS High School in St. Louis. 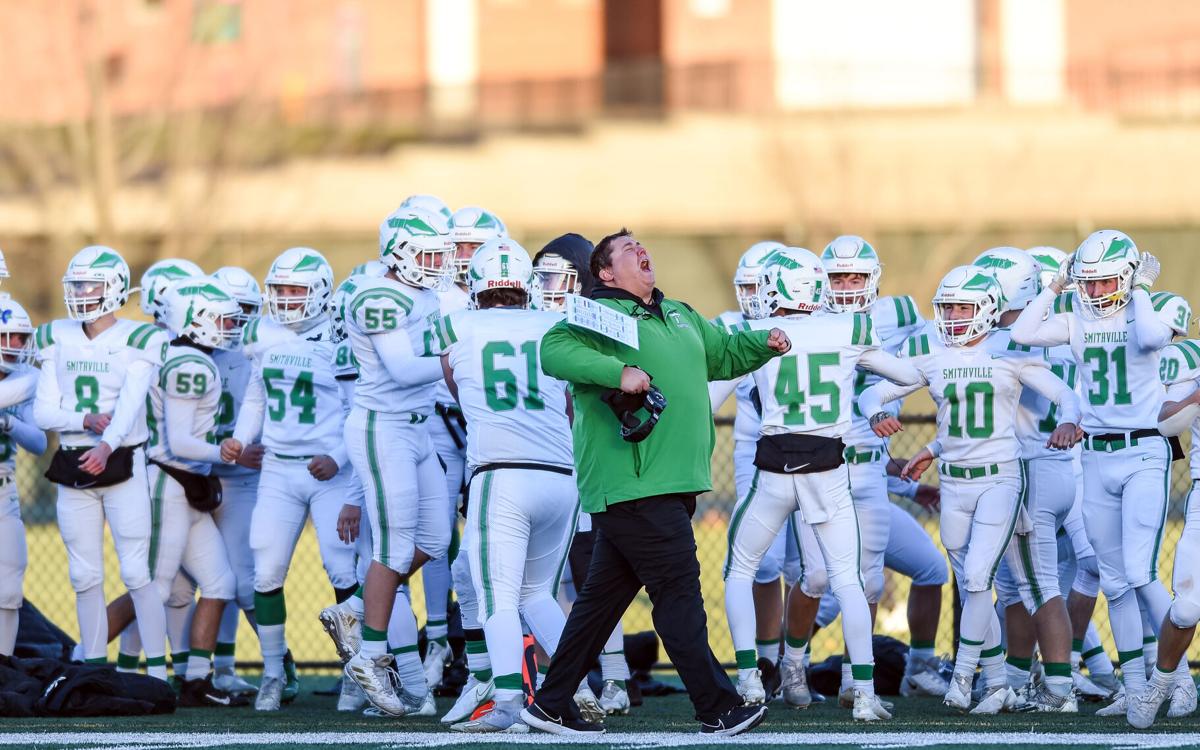 Smithville players and coaching staff celebrate as time runs off the clock during the Class 4 semifinal against MICDS Friday, Nov. 26, at MICDS High School in St. Louis. 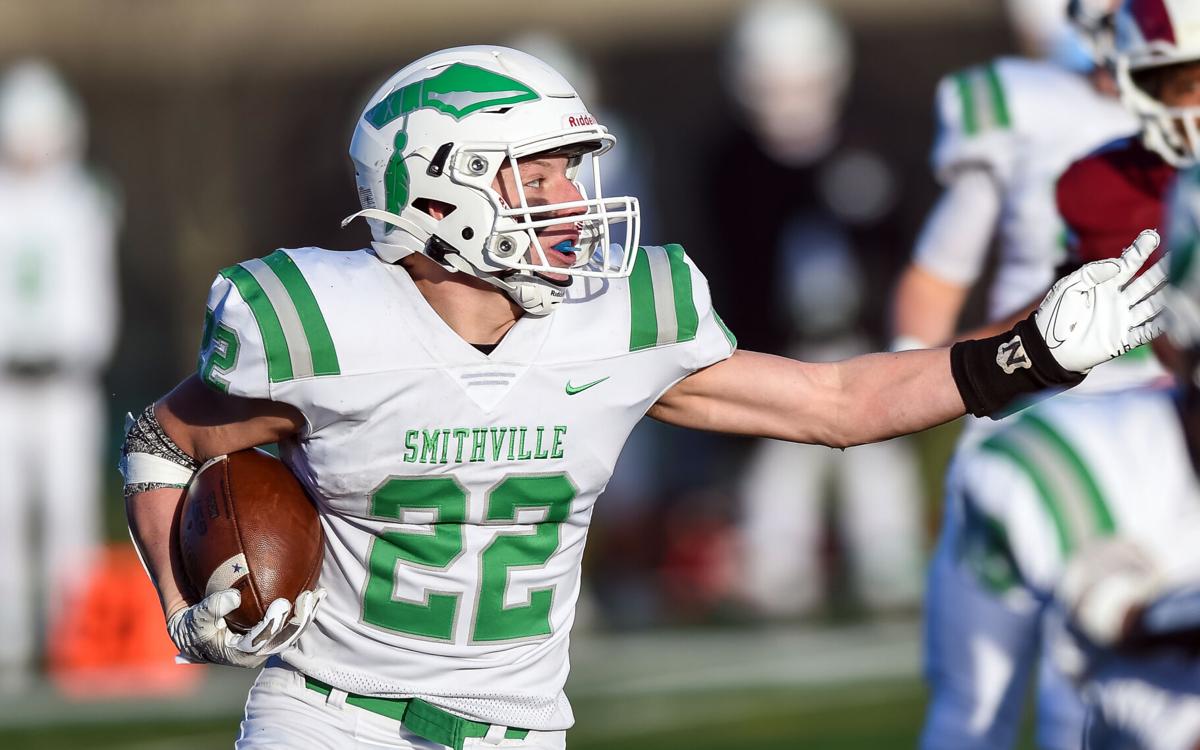 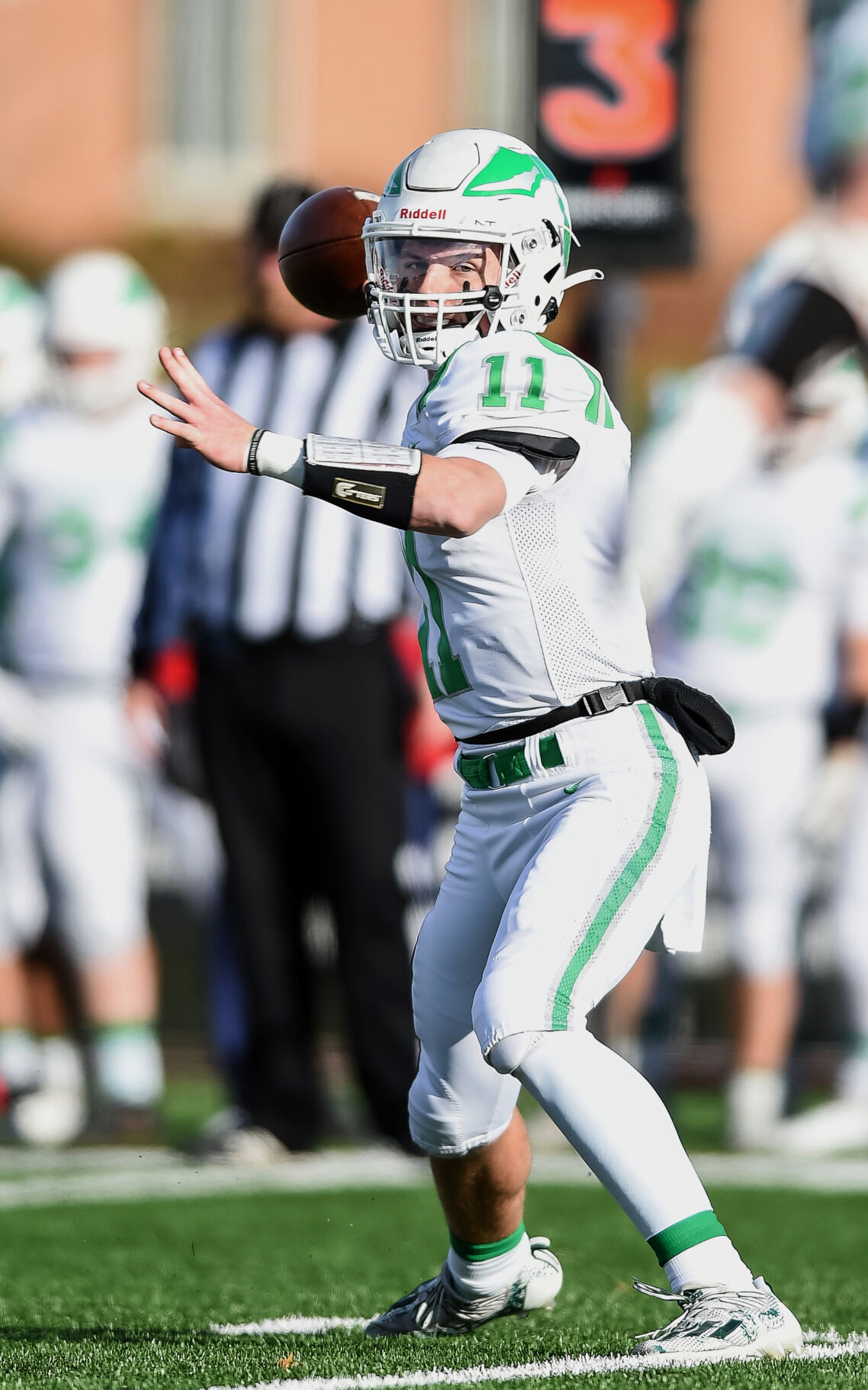 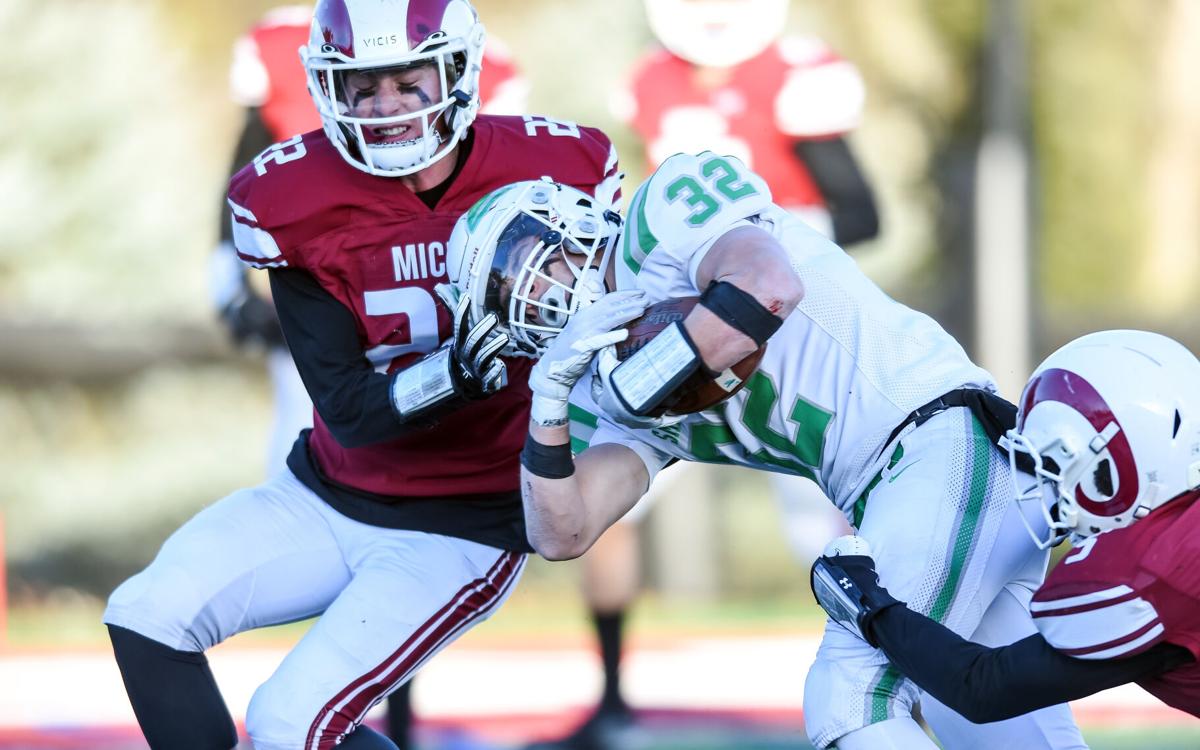 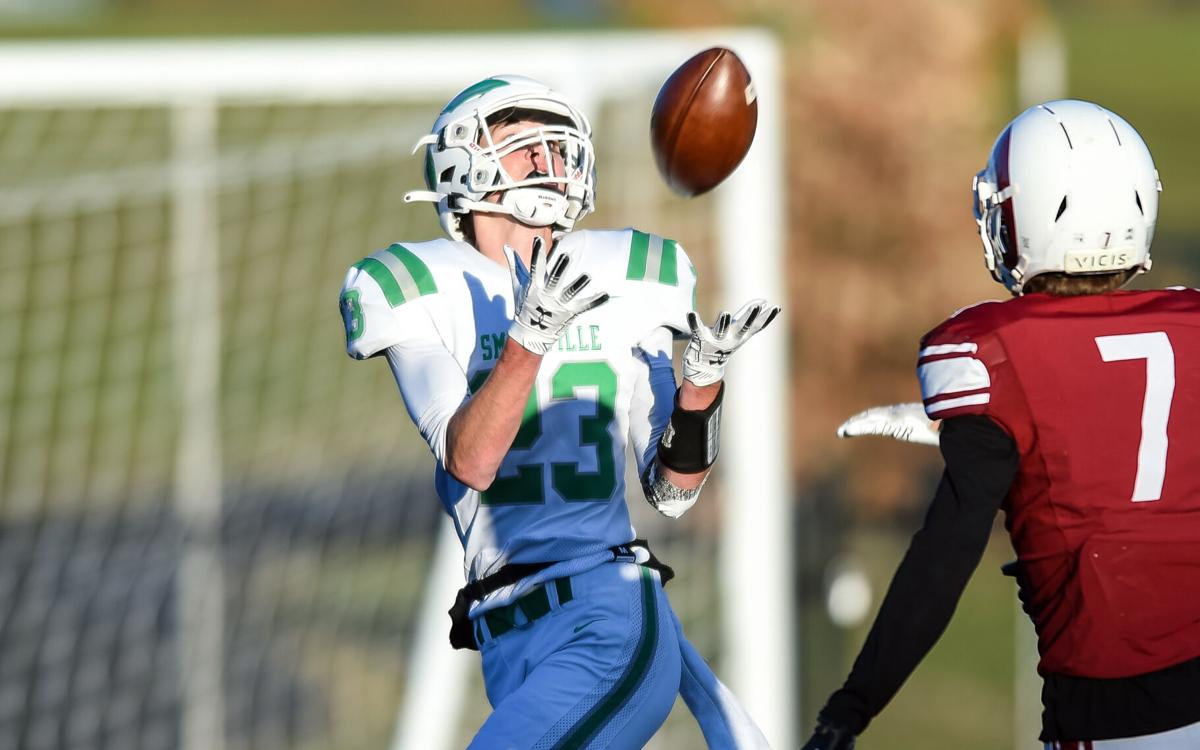 Smithville’s Rhett Foster catches a pass and takes it to the 1-yard line during a Class 4 Semifinal football game against MICDS on Friday, Nov. 26, 2021, at MICDS High School in St. Louis.

Smithville’s Andrew Hedgecorth pitches on a counter play during a Class 4 Semifinal football game against MICDS on Friday, Nov. 26, 2021, at MICDS High School in St. Louis.

Smithville players and coaching staff celebrate as time runs off the clock during the Class 4 semifinal against MICDS Friday, Nov. 26, at MICDS High School in St. Louis.

Smithville’s Rhett Foster catches a pass and takes it to the 1-yard line during a Class 4 Semifinal football game against MICDS on Friday, Nov. 26, 2021, at MICDS High School in St. Louis.

ST. LOUIS — Championship caliber teams go through adversity. When your back is against the wall is when you find the true character of a squad. In the Class 4 state semifinal, the Smithville Warriors showed who they are, winning 40-36 over MICDS.

The Warriors were down 36-20 entering the fourth quarter as their season looked like it was coming to a close. But, the Warriors showed their true selves, a team that fights hard for each other and never backs down. It’s a mantra head coach Jason Ambroson has instilled in his team all year.

With MICDS leading 36-20, the Rams had the ball to open the fourth quarter. The Rams had yet to be stopped in the game as they scored five touchdowns on five straight possessions. The defense for Smithville responded in the last quarter, halting the Rams with 10 minutes remaining.

Smithville’s offense came out and responded quickly as quarterback Andrew Hedgecorth guided the team to MICDS’ red zone. He used a play action and rolled to his right along with his whole line, then on his back foot, rifled a pass to the opposite end of the end zone where Sam Calvert was waiting for the touchdown. The Warriors were only down 10 points. But, before that series, the offense for Smithville was not moving well and Hedgecorth was upset with himself, until a familiar figure picked him up.

“I threw that ball short and was not very happy with that throw and in my head thinking I let my team down,” Hedgecorth said. “Hayden Sigg told me to keep my head up.”

He did, and the defense was also up to the task on the next possession. MICDS was stifled as the Warriors stopped the Rams. A good punt by MICDS set up the Warriors inside their own 10-yard line with 6 minutes to play. The Warriors marched down the field little by little and then a huge play came.

Hedgecorth lined up and rifled a pass across the middle of the field to Rhett Foster for the 51-yard pass. The senior wide receiver caught the ball and was tackled at the 1-yard line. The Warriors were in business as Caleb Donnell punched in the touchdown. Momentum completely swung in the favor of the visitors as they were only down 3 points with 4 minutes to go.

MICDS recovered the onside kick and was set up at their own 47. A couple of rush plays and penalties kept the Rams offense from moving down the field, including a play where Smithville almost recovered a fumble. The Warriors defense made a huge stand again as the offense came back onto the field. After giving up five straight touchdowns, the defense responded with the best three defensive stops this year.

Hedgecorth and the Warriors had 3.5 minutes to move the ball 83 yards. The offense used a mix of draw plays up the middle and easy: 5- to 10-yard out routes that easily torched the Rams defense as they sagged off into prevent coverage.

Smithville quickly moved the ball down to the MICDS side of the field, but were thwarted on three straight plays. The Warriors were staring at the end of the season as it was fourth down with seven yards to go.

The best quarterback in Class 4 stepped back and calmly read the defense and passed a bullet to the middle of the field to Calvert for the massive touchdown to take the lead.

With the season close to ending, the Warriors claimed it back and took the lead over MICDS, 40-36.

“It was a throw I wanted to make presnap, then I saw the defender fall down and it allowed him to catch it. We ended up scoring. It was crazy,” Hedgecorth said. “I wanted to cry, but I didn’t want to cry. The fans and how loud they were, the student section and the people who traveled there, we wanted to celebrate with them.”

The undefeated MICDS team had 1 minute to score points to salvage the game, but they couldn’t. On their second play, the quarterback play for the Rams was intercepted by none other than Calvert.

The Warriors scored 20 unanswered points in the final 8 minutes to secure their place in the Class 4 State Championship game Friday, Dec. 3, in Columbia.

The final touchdown by Calvert was the first lead the Warriors had since the opening drive in the first quarter when Hedgecorth pulled off a beautiful quarterback read option. He was off for the 50-yard touchdown run.

MICDS answered on the following drive as they scored from close range on fourth down. The Rams would score twice from 1-yard out on fourth down, the second time coming on the opening drive of the third quarter.

On their second possession, Cody Simoncic came in as the wildcat quarterback. He took the snap and ran straight into the mouth of the Rams defense for the touchdown. That score tied the game at 14 late in the second quarter.

The team from St. Louis added to their score with a broken play where Smithville was all over it. The Warriors rushed the quarterback who scampered away from a few tackles and found his running back in the flat who ran it in for the long touchdown.

Smithville answered as Hedgecorth found Max McKenzie for the receiving touchdown, his first of the year. The two point conversion was no good for Smithville as MICDS led 29-20 at the halftime break.

A drive that lasted over 8 minutes, started the third quarter for the Rams as the Warriors could not get off the field. Another short rushing touchdown propelled MICDS to a 36-20 lead and their last points of the game.

This would be the final bit of momentum for MICDS before Smithville’s historic comeback in the game.

“We can never get down, it’s instilled in us by (Ambroson),” Hedgecorth said. “You play hard and when the clock hits four zeros, you hope the score is in your favor.”

The Warriors will take on Hannibal at 11 a.m. Friday in Memorial Stadium.