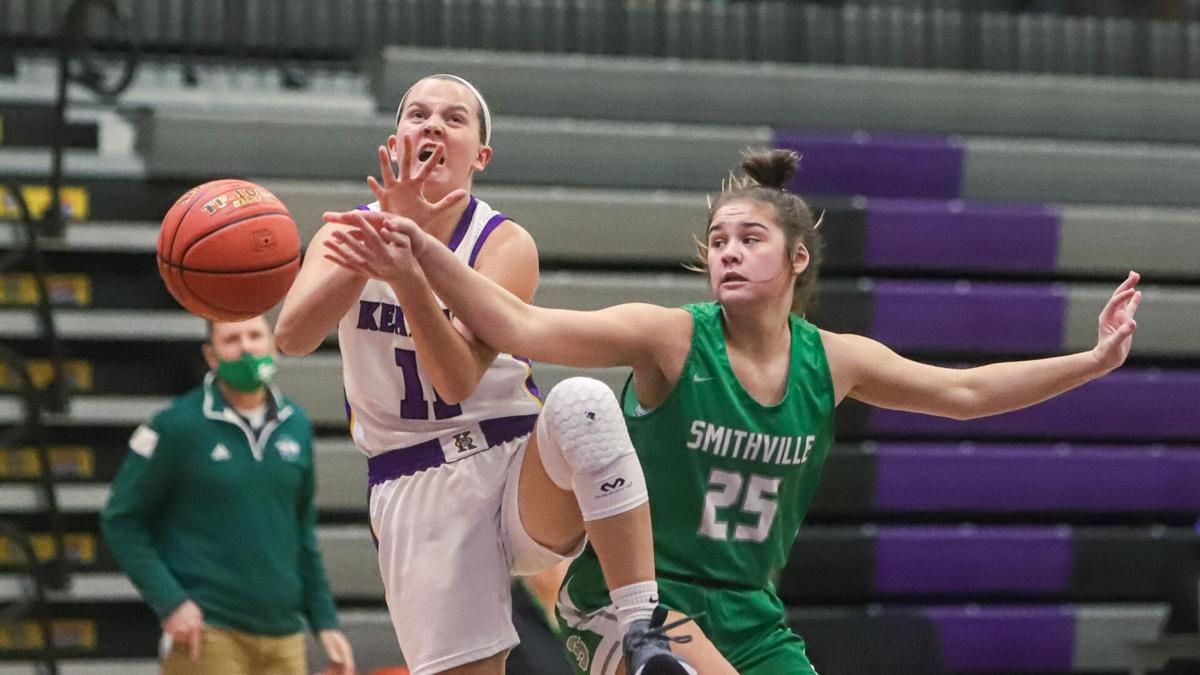 Smithville junior guard Kenzi Moes swipes the ball away from Kearney senior guard Kenzi Hoffman on a drive to the basket during a girls basketball game Monday, Jan. 18 at Kearney High School. 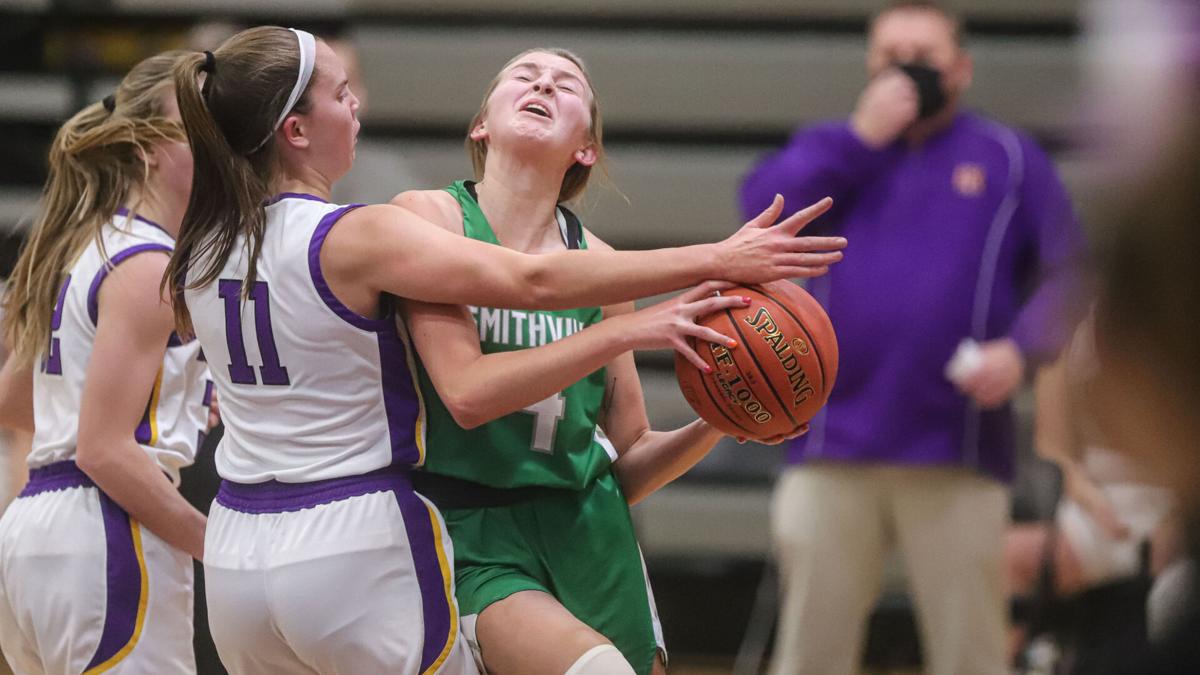 Smithville junior guard Kenzi Moes swipes the ball away from Kearney senior guard Kenzi Hoffman on a drive to the basket during a girls basketball game Monday, Jan. 18 at Kearney High School.

The Highway 92 rivalry followed the usual script as the Kearney and Smithville girls basketball teams locked up for another defensive slugfest that found both teams tied up at 19-all for most of the fourth quarter.

The biggest difference compared to the last six contests between these two squads was in the outcome.

The Warriors found the seventh time to be its charm as the team secured a 23-21 victory over the Bulldogs Monday, Jan. 18 at Kearney High School. The Warriors had not defeated the Bulldogs since winning the 2017 district championship game, which predates Smithville joining the same conference as Kearney.

Junior guard Kenzi Moes scored 14 points with four 3-pointers, including three triples in the third quarter to help even up the score after Kearney opened the game with a 12-3 lead.

The Bulldogs would eventually put Moes in check, but their heavy pursuit of the hot shooter left freshman guard Kaitlyn Milford open for the go-ahead 3 with under three minutes remaining.

“It’s a big win beating Kearney,” Moes said. “We haven’t beat them in a long time and we knew it was still going to be a hard game. … They wanted to win, but we wanted to win too and get the big one.”

Smithville head coach Trevor Mosby agreed that it was an important victory for his team, but his reaction did not match the feat of taking down a conference rival that also plays in the Warriors’ district this season.

“I’m not going to lie, I don’t feel great right now about the way we played,” Mosby said. “I should be a little more happy at this point.”

Mosby said he thought his team was the better team heading into the game and that the score did not reflect that. He said the team had some things to figure out.

So what do the Warriors need to fix?

Mosby said the first thing is getting the players to gain confidence in their shooting as Moes was the only player to convert a field goal attempt until Milford’s dagger.

He also wants the post players to improve on catching the ball when being double-teamed, which happened a lot with Kearney’s 2-3 zone.

Mosby wanted to play more inside out, but the bigs had trouble reeling in the pass and an even harder time kicking it back out to open shooters. Christina Walsh was held scoreless as Kearney refused to let her establish position inside the paint.

That outcome was part of why Bulldogs head coach Troy Resler left the game proud of his team’s performance despite losing the streak after surrendering a big lead early in the game.

“I could not be more proud of how hard they played tonight,” Resler said. “We’re struggling to score. It’s no secret. I feel like we’re getting good looks. … We just go into scoring lulls where we can’t get a bucket, but it’s never from a lack of effort.”

That lull in the second quarter left the door open for Smithville to close the gap to 12-10 heading into halftime. Moes hit threes on back-to-back possessions to quickly turn the team’s first lead into a two-score advantage.

But the Bulldogs kept scrapping, slowing down Moes and the Warriors offense as Allie Poage and Shelby Holst each got a basket before Kenzi Hoffman scored her 12th point with a 3-pointer late in the third to take the lead back.

“I think our defense looked awesome tonight,” Hoffman said. “Our defense held us in there, our 2-3 zone really kept them out of the paint and made them shoot long 3s.”

But Moes got one more of those long 3s to go down as she tied up the score heading into the final frame. After scoring a majority of the team’s points, Moes gave all the credit to her teammates.

“It was a big game for me, but I would like to think the team because they got me opportunities,” Moes said.

With scoring brought to a complete standstill in the fourth quarter thanks to equal parts smothering defense and cold shooting from both teams, Smithville broke through first with a score from an unlikely source.

“Milford stepping up and knocking that down, as a freshman, is big,” Mosby said.

Milford has played in less than half the team’s games this season, receiving extra minutes in this game because senior guard Emma Chevalier is in quarantine after experiencing a potential exposure outside of school activities.

JoJo Kutch got Kearney a couple more points at the line but the Warriors closed the game out to move to 9-3 on the season and remain atop the conference standing with a 4-0 record in the Suburban Blue.

Kearney slipped back to the middle of the conference with a 2-2 record and is still searching for its first winning streak. The Bulldogs are 4-4 over their last eight games after starting the year 0-6.

Smithville (9-3, 4-0 Suburban Blue) will face Platte County 7 p.m. Thursday, Jan. 21 at Smithville High School before heading to the Cameron Tournament. The Warriors will face host Cameron in the first round at 7 p.m. Monday, Jan. 26 at Cameron High School. The subsequent rounds are scheduled for Jan. 28-30.