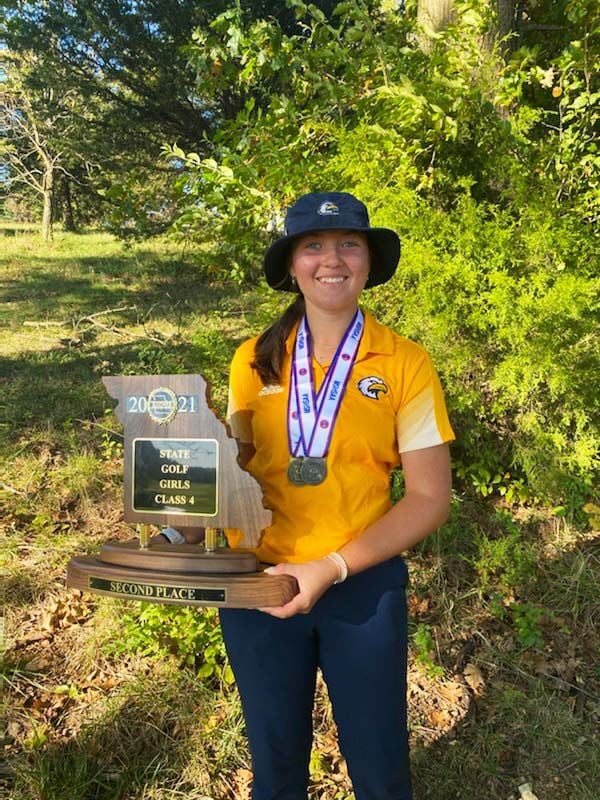 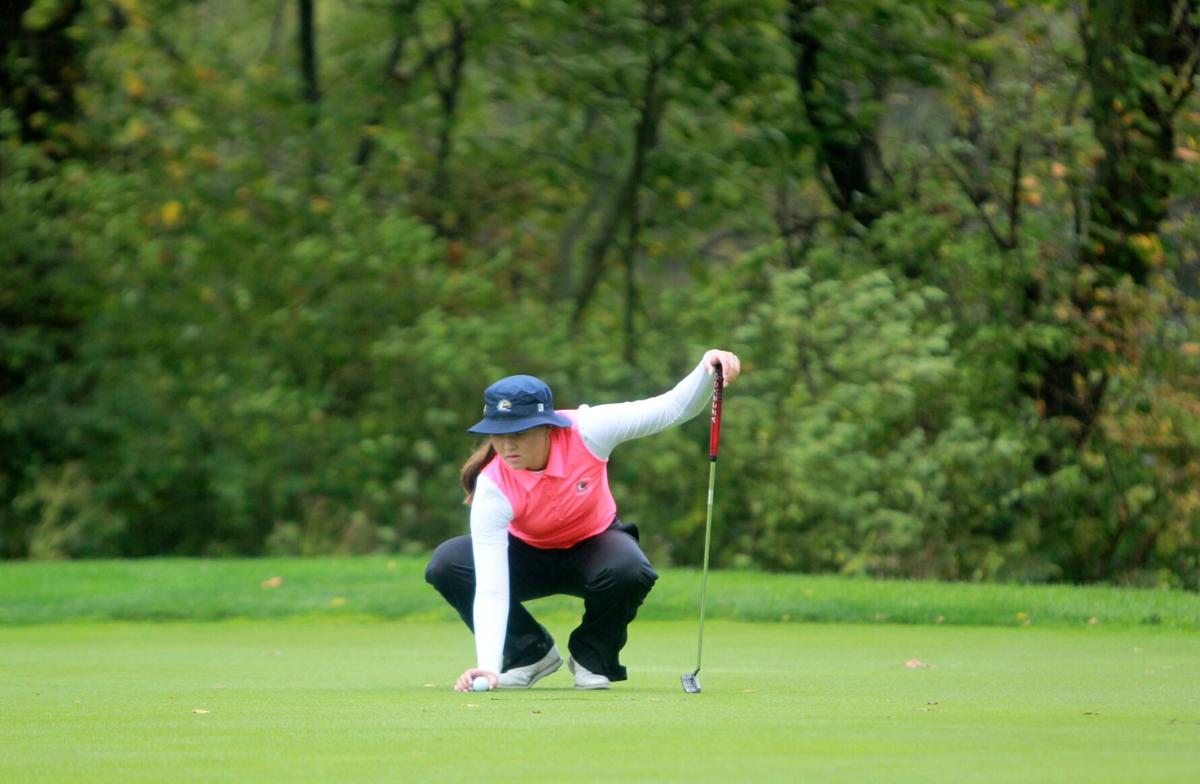 Bailey Burkett lines up a putt during the district championship Monday, Oct. 12. The sophomore won the Missouri Class 4 State Championship the week after in Springfield.

Bailey Burkett lines up a putt during the district championship Monday, Oct. 12. The sophomore won the Missouri Class 4 State Championship the week after in Springfield.

On the most important day of the season, Liberty North’s Bailey Burkett played her best golf for the Eagles. Burkett fired a one over round of 73 to claim the Class 4 Girls Golf State Championship at Rivercut Golf Course in Springfield.

Burkett’s journey to the mountain top of Missouri golf was not her original goal at the start of the season.

“I think starting the season, you’re not really thinking about being the state champion,” Burkett said. “It’s more of how am I going to perform throughout the season.”

Her performance was impressive throughout the year. She captured the Liberty North Invitational by winning with a two under, besting the second-place finisher by one shot. She followed it up with a second-place finish at the Greater Kansas City Suburban Conference Championship then helped her team qualify for the state championship with a third place at the rainy district championship.

“I had some tough times on the course with scoring, but that also came with the fact that I had lost some motivation during the season,” Burkett said. “So now looking back on the season, I’m super grateful for the people around me that helped me get back to where I needed to be.”

“She was so consistent,” Braden said. “People who perform under pressure even better than what they normally do, that’s a rare quality that separates her from a lot of the others.”

The sophomore ended day one at the state championship shooting a two under score of 70. She led the field by one shot and was one of two players in the whole tournament that were under par.

“The first day, the weather was absolutely beautiful; and the second day was really nice, but there was a lot of wind so that made it a little more difficult,” Burkett said.

The wind on day two made Rivercut a hard test as no one in field shot under par.

Burkett’s biggest moment came on hole 11, where she bogeyed the par 4. It was her strong mentality that gave her the ability to stay positive and push on when it would have been easy to give up after dropping the shot.

“Golf is a total mental game,” Burkett said. “I knew that bogey was a pretty good bogey from where I was at off the tee so I wasn’t really disappointed.”

Burkett rattled off four birdies in the final seven holes to win state.

“It hasn’t quite sunk in yet that I am a state champion, but it means a lot to be the first women’s champion and I think it is really cool that I made it happen,” Burkett said.

Burkett, with her individual championship, helped her teammates secure a second-place team finish. As a team, Liberty North finished 54 over with strong performances from Averi Mickelson, Emmy Braden and Kate Braden.

“I absolutely love playing with these girls. They are so amazing and playing with them is always a good time,” Burkett said. “We all support each other so going into a big team competition like state, you have to have a really good team bond like we did.”

The group of four finished 14 shots off of the eventual state champion team, St. Joseph’s Academy.

“This is by far and away the best girls team I have ever had,” Braden said. “They were really a dream team.”