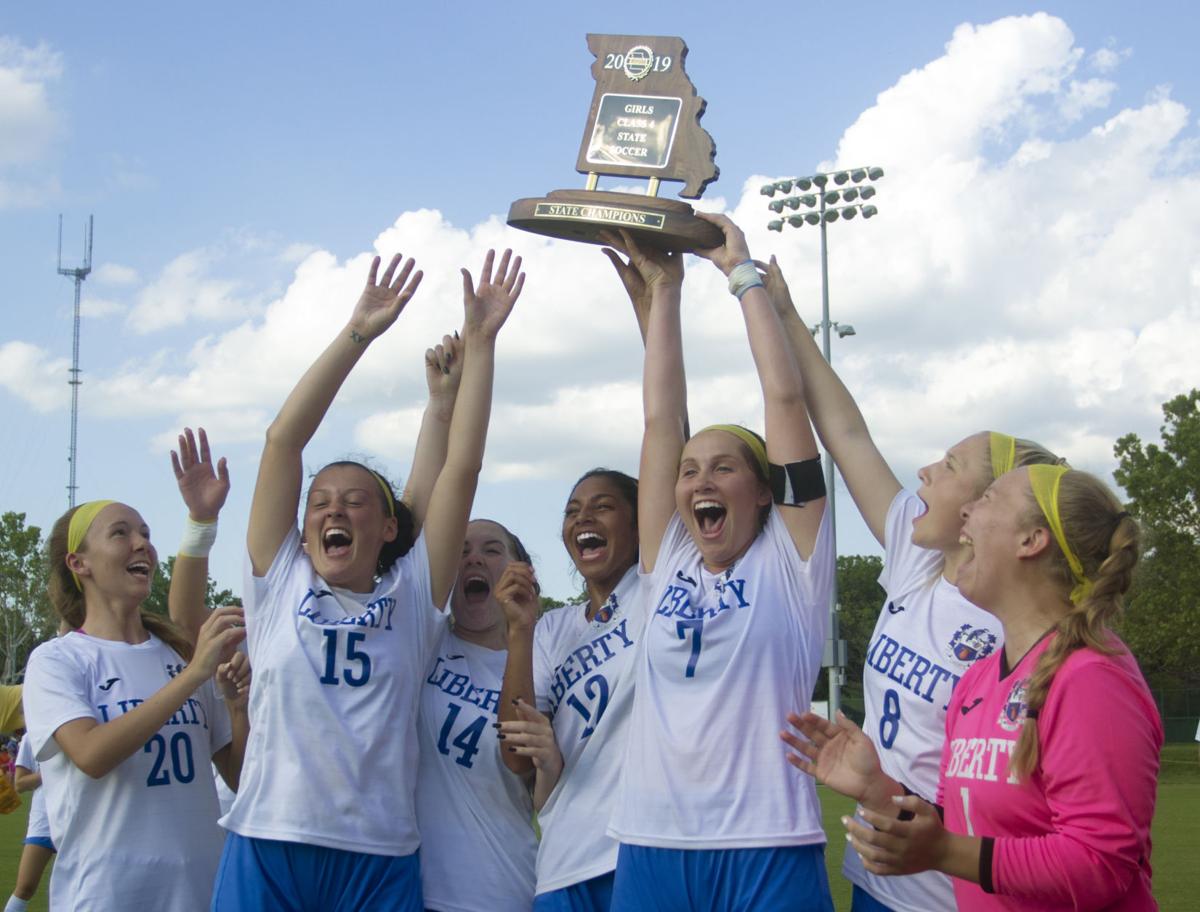 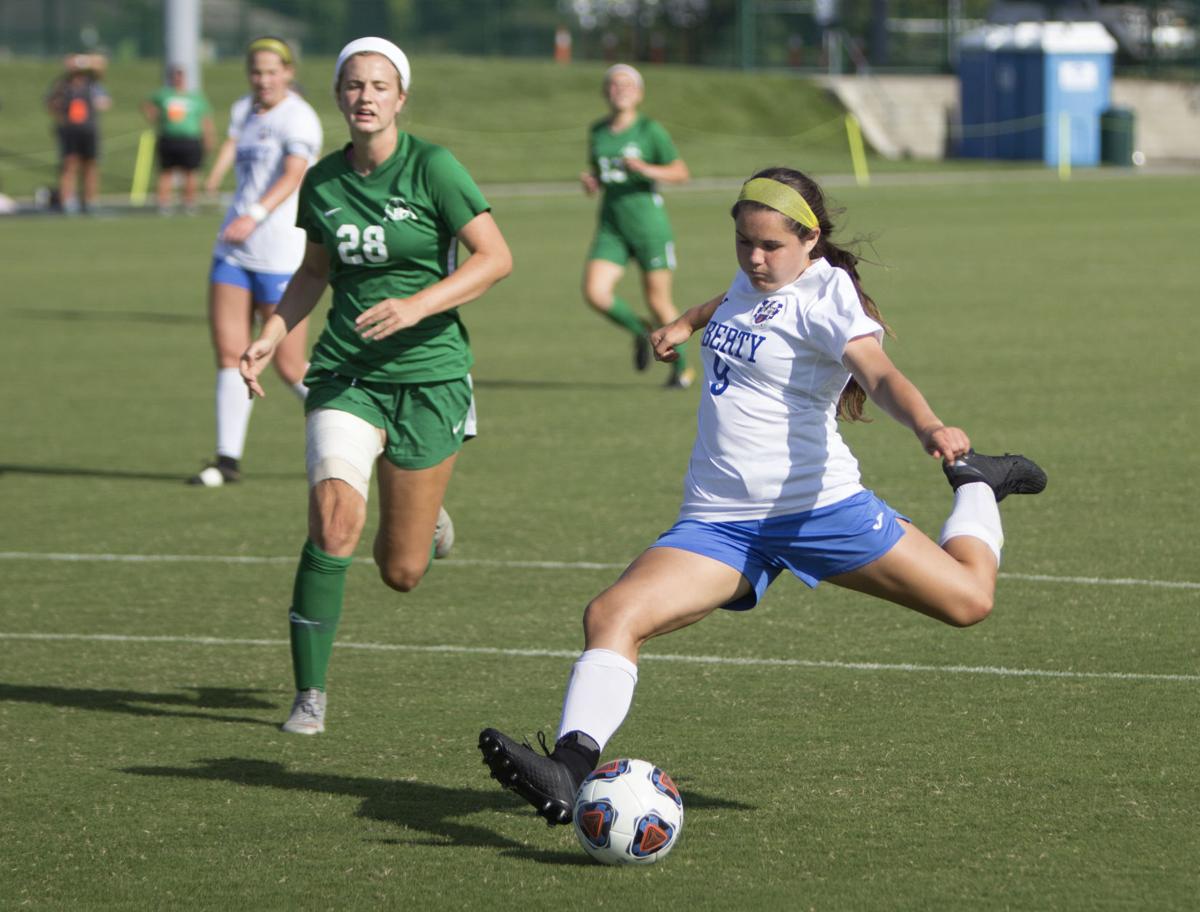 Liberty sophomore and forward Maya Gaona shoots the game-winning goal in the 47th minute of the Blue Jays’ 3-1 win over Nerinx Hall.

Liberty sophomore and forward Maya Gaona shoots the game-winning goal in the 47th minute of the Blue Jays’ 3-1 win over Nerinx Hall.

KANSAS CITY — How did Liberty pass time during a nearly two-and-a-half-hour weather delay in the Blue Jays’ most important game of the season? Singing, mostly. Nursery rhythms and a rendition of the national anthem echoed out of the Blue Jays’ locker room at the Swope Soccer Village as the Class 4 state championship was put on pause. The singing was accompanied by getting snacks.

“We did a lot of singing,” Liberty coach Tyler Nash said. “They were a little hangry. They kept talking about food and I am going, ‘You are about to win a state title, can we get 40 minutes in?’”

The singing was a warm-up act for screams and cheers Liberty players and faithful fans would unleash almost four hours after the title game began with Liberty holding a 3-1 lead over Nerinx Hall as the clock finally struck triple zeros on Saturday, June 1. The win marked the Blues Jays’ first soccer state title since 2011.

It took nearly the full first 40 minutes before the scoreless draw was broken.

“They were playing excellent defense. We were having limited chances,” Nash said.

The Blue Jays got a look in the 37th minute when sophomore Maya Gaona missed a shot in the box that nicked the outside of the post. The shot boosted Liberty’s belief they could break through the Hall Markers’ stout back line, Nash said.

Two minutes later, Liberty drew first blood with under a minute to play in the half.

Junior Madilyn Hamline crossed a ball into the box and Gaona did the rest, heading it past Hall Markers keeper Hannah Olive for a 1-0 lead with 45 seconds until the intermission.

“I just wanted to make it happen,” Gaona said. “I saw the ball coming and just went and hit it with my head and was hoping for it to go in.”

Both teams returned from halftime before the game was put in a holding pattern after 3 p.m. due to lightning and rain in the area.

“It never hurts to recover a little more,” Nash said. “We were able to piece that together a little bit more and get our focus again.”

Still, there was business to attend to for the Blue Jays.

“The girls wanted to play though. They were looking at the weather saying it’s time to play,” Nash said.

When the squads returned to the pitch, Liberty got back in the swing of things as if the delay never happened.

“The approach that I told them was, ‘They are going to come at you 100 miles an hour. But I will tell you, in the first 10 minutes, you are going to have a good opportunity to score,’” Nash said.

The Blue Jays head coach proved to be prophetic.

Senior Shae Turner hit Gaona on a breakaway seven minutes into the second frame. The sophomore powered the ball into the back of the net for her 14th goal of the season and a 2-0 Liberty lead.

Nerinx Hall halved its deficit in the 59th minute as Mackenzie Duff headed in a corner kick from Jessica Presusser.

Hamline cashed in an insurance goal in the 77th minute to seal the Blue Jays’ third state title and first in Class 4.

“It was great,” Gaona said on Liberty’s newly acquired state title. “I really loved being able to spend the time with the team and make this happen for ourselves and for the community.”

Liberty wraps up the season with a 23-2 record, ending with a 10-game win streak.

“It’s been an emotional ride,” Nash said. “We are a family.”

Life in the Red: Pierson-El with a special dedication after his first XFL touchdown

Witten wants to play for Cowboys in 2020

Randy Speer can be reached by emailing randy.speer@dsjnow.com, by calling (660) 747-8123 or on Twitter at @RandySpeer_DSJ.