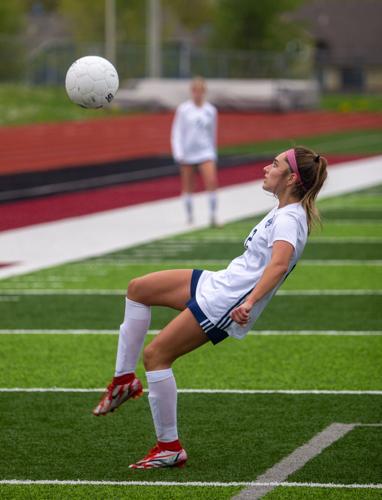 Liberty North's Ekaterina Theoharidis goes for the over head kick against Lee's Summit North on Thursday, May 5. 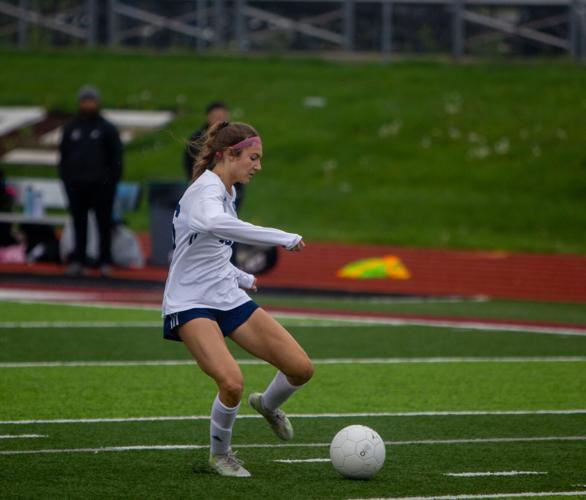 Liberty North's Megan Hinnenkamp shoots the ball that led to her second goal of the game against Lee's Summit North on Thursday, May 5.

Liberty North's Ekaterina Theoharidis goes for the over head kick against Lee's Summit North on Thursday, May 5.

Liberty North's Megan Hinnenkamp shoots the ball that led to her second goal of the game against Lee's Summit North on Thursday, May 5.

LEE’S SUMMIT — It was not the most electrifying game for the undefeated Eagles on Thursday, May 5. But, they got the job done by defeating Lee’s Summit North 4-0 on a dreary afternoon.

Liberty North head coach Steve Person shared this sentiment. He explained that he had to switch some players around due to an injury. Some players had to play out of position and it forced the Eagles to play in an unconventional style. A way of playing that looked unfamiliar at times.

“They all have a role to play in the mosaic, so when you pull out a piece, it looks different,” Person said. “It was different, it was not better or worse, it was different. So, we had to learn to play with those traits.”

The talent for Liberty North is too strong, though. They found a way to take the win over a Broncos team that gave it their best. The Eagles ended the first half out in front by a score of 2-0. The goal came from Ekaterina Theoharidis and Megan Hinnenkamp.

In the second half, Lee’s Summit North came out with pressure and tried to control the game. They were able to knock the ball around, but it came to little fruition. Liberty North’s fitness is off the charts as the team sprints harder and harder as the game dwindles.

Hinnenkamp earned the hat trick after two fabulous goals. The first one came in the 70th minute where the Broncos were spread thin on the back line. A gorgeous through ball allowed Hinnenkamp to run underneath it and she slotted the shot home around the Broncos’ keeper.

The second goal came from nice play on the right wing. A ball was crossed in low toward the goal mouth, but was cleared. Hinnenkamp had a soft touch and blasted a shot into the top of the goal. It was the third goal of the game for Hinnenkamp who celebrated her birthday. No better gift than a hat trick and clean sheet.

“After about 20 minutes, their legs gave out and then we started to run,” Person said. “When we run and you are stretched, we are going to make you pay which is what happened.”

The defense for Liberty North continues to be outstanding as goalkeeper Karli Angle has organized her back line with precision. Lee’s Summit North struggled to create sound chances as the Eagles kept their eighth clean sheet of the year.

“The clean sheet is everybody, everybody understanding how to keep the other team from being dangerous,” Person said. “We’ve got great athletes, too. They know if we can get there quicker than you can get rid of it, we are winning.”

Liberty North will face Lee’s Summit West in their final regular season home game on Tuesday, May 10. The conditions will be radically different as forecasts suggest hot temperatures, conditions Liberty North has not faced this season.

Final: LN 4-0 LSNFitness is an underrated part of the game, Eagles showed how fit they were by controlling the final 20 minutes and allowing zero chances.Liberty North’s 8th clean sheet, 17-0 on the year.