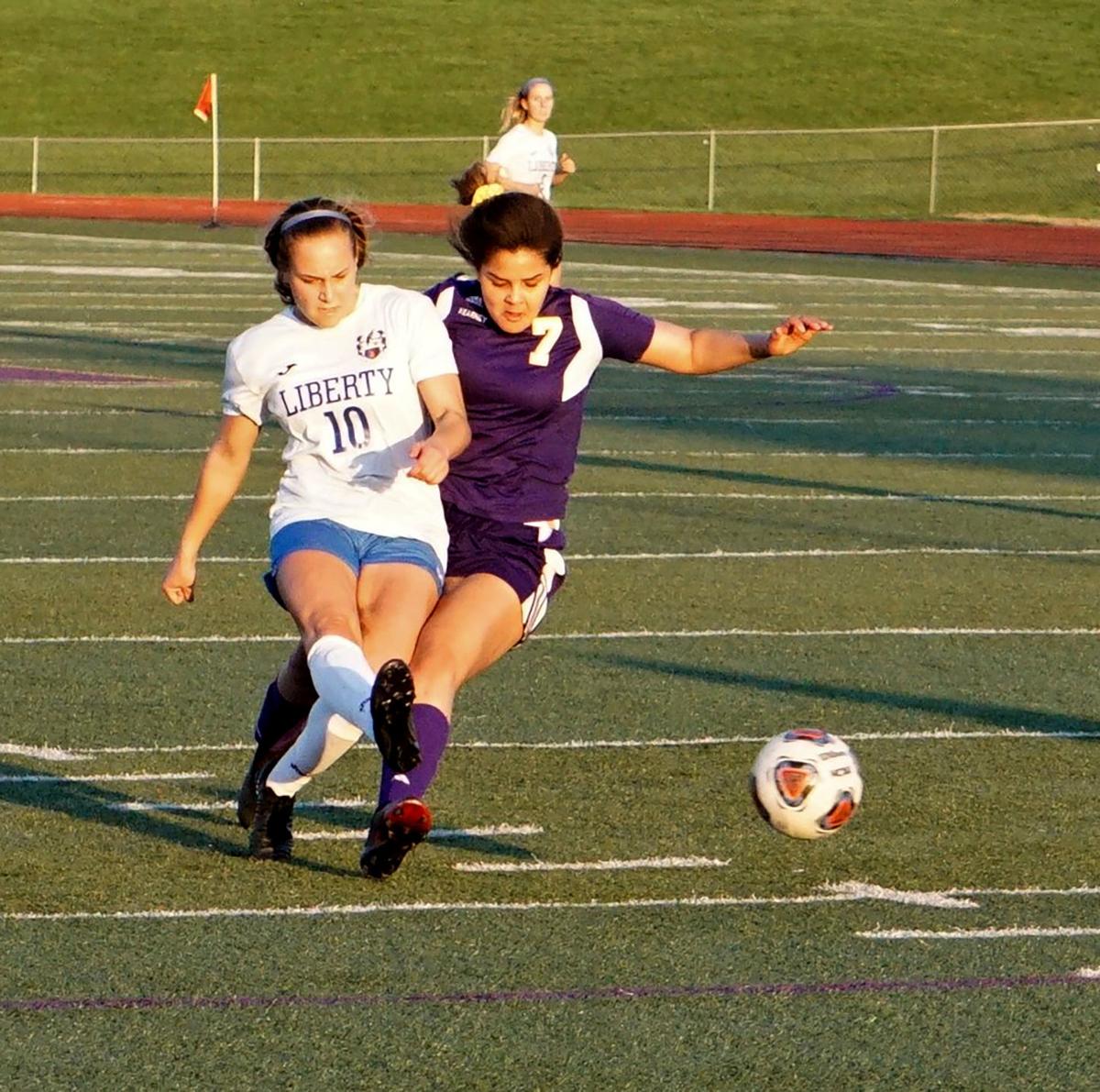 Liberty junior Madilyn Hamline sends a shot past the Bulldog defense for the first goal of the game Tuesday, April 8, in Kearney. Liberty claimed a 2-1 overtime victory, handing Kearney its first loss of the season. 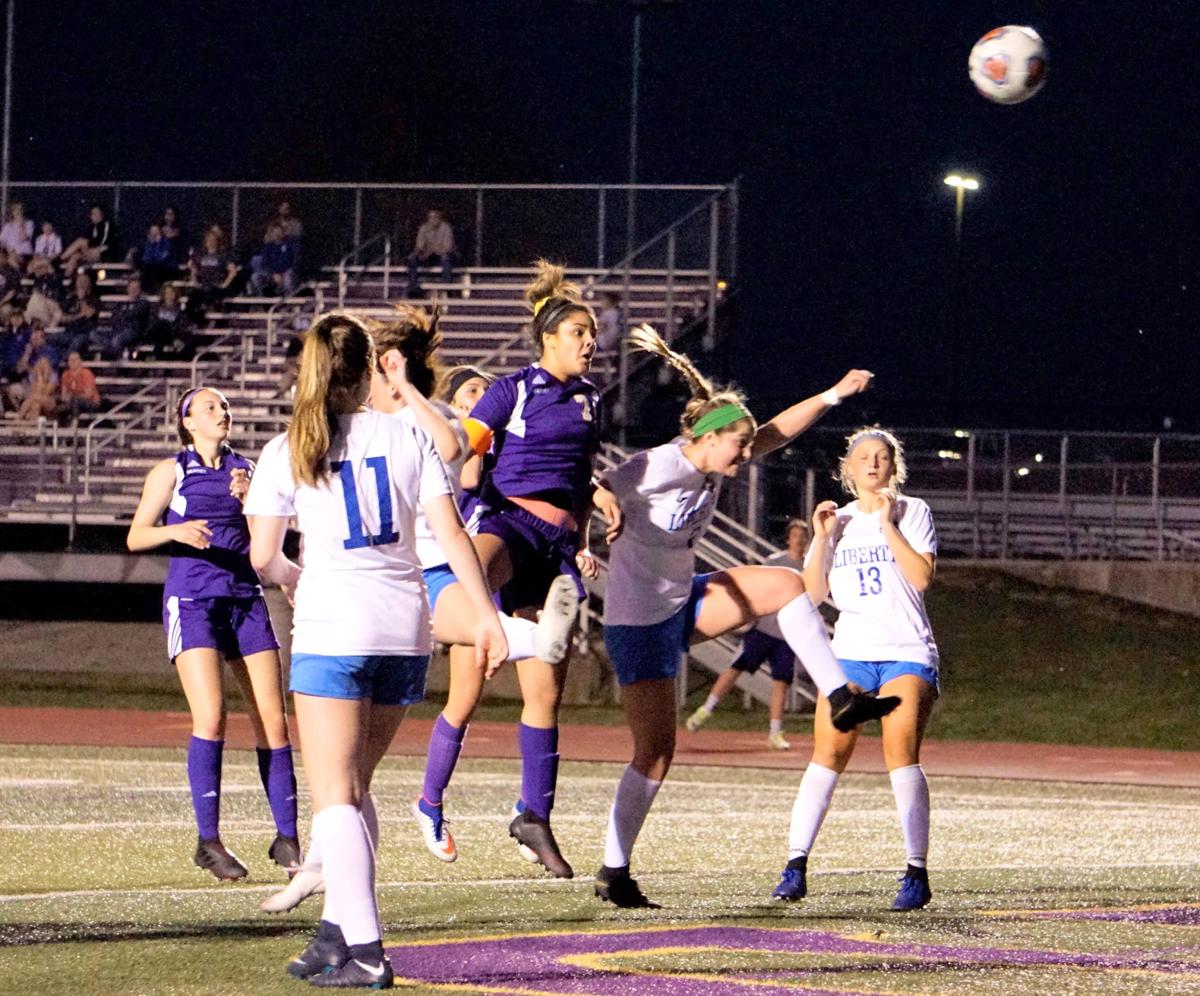 Kearney senior Saige Williams heads in a corner kick to tie up the game at 1-1 in the 77th minute Tuesday, April 8, in Kearney. The Bulldogs lost in overtime 2-1 on a penalty kick.

Liberty junior Madilyn Hamline sends a shot past the Bulldog defense for the first goal of the game Tuesday, April 8, in Kearney. Liberty claimed a 2-1 overtime victory, handing Kearney its first loss of the season.

Kearney senior Saige Williams heads in a corner kick to tie up the game at 1-1 in the 77th minute Tuesday, April 8, in Kearney. The Bulldogs lost in overtime 2-1 on a penalty kick.

KEARNEY — It took the entirety of the 90 minutes played, including overtime, for the Liberty Blue Jays soccer team to secure a 2-1 victory over the Kearney Bulldogs on Monday, April 8, in Kearney.

Kearney headed into the game at 7-0 and averaging more than five goals per game, while Liberty held a 6-1 record netting a little less than three goals a game. The numbers seemed to favor the Bulldogs, but despite that, the Blue Jays were able to find a defensive strategy that limited the quality looks Kearney got.

“They (Liberty) have a strong and fast defense and they close and double down very well,” Kearney coach Amanda Hopkins said. “So every time we got the ball, it was two on one and it really shut us down.”

For most of the game, the two teams traded possession, and the majority of the game was played between the 20-yard lines on the field. The first score came on a strike from Liberty junior Madilyn Hamline from 25 yards out.

Hamline slipped her shot past Kearney sophomore goalkeeper Mayson Behney to give the Blue Jays a 1-0 advantage in the 31st minute. The lead would remain the same heading into the second half as Kearney struggled to break through Liberty’s defense.

The Blue Jays changed up their attack in the second half, playing more of a passive offense to run the clock as much as they could. The strategy worked until the closing minutes of the game when Kearney turned up the aggression.

With a little more than three minutes left to play, the Bulldogs capitalized on a corner kick and a header by senior Saige Williams found its way into the goal to tie the game at 1-1 in the 77th minute. As regulation came to a close, Liberty coach Tyler Nash’s message to his team was to put the mistake behind them.

“I asked them, ‘How badly do you want this?’” Nash said. “It is one of those things we always try to reiterate is that we cannot change what just happened in the past. I think we elevated and played well in the overtime.”

The overtime resembled what most of the regulation time looked like as both teams struggled to find quality shots and the defenses stopped nearly any attack. As the clock wound down, Liberty’s offense found a seam and took advantage.

With five seconds left, Liberty senior Shae Turner sent a shot off that was knocked down by the Bulldogs in the box, but a handball was called. Turner would get a shot to win it for the Blue Jays on a penalty kick and drilled the top right corner of the goal to seal the 2-1 victory for Liberty.

Nash said he was glad to see Turner capitalize on the opportunity and send the Blue Jays to a 7-1 record.

“It was a good win for us,” Nash said. “It is good to put senior leaders who have continued to drive this team in those positions. It is good to see early on, especially against teams like this (Kearney).”

For the Bulldogs, the record moves to 7-1 as well, but Hopkins found a positive spin to the loss for Kearney.

“I don’t like to lose, I hate to lose but a loss early on in the season to a good team is not a bad thing,” Hopkins said. “We had a good run last year and they expect good things this year. Sometimes it is not a bad thing to get knocked off the pedestal and realized we really have to work for what we want.”