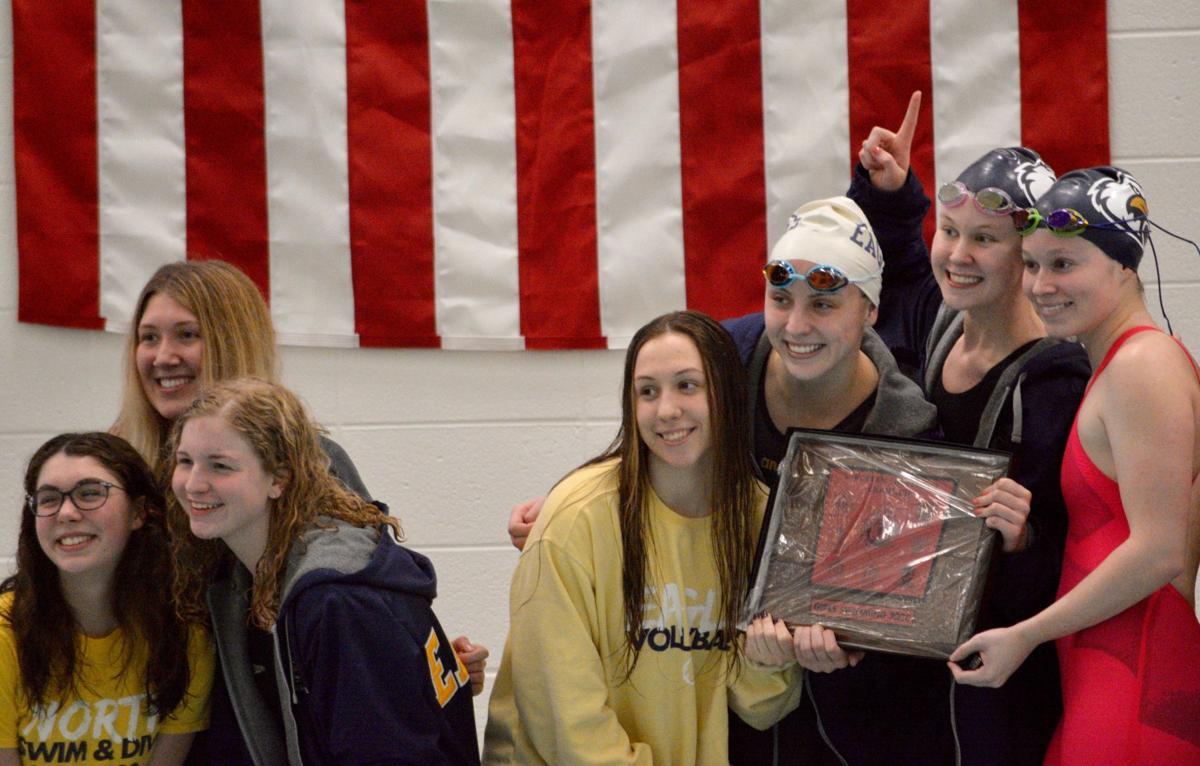 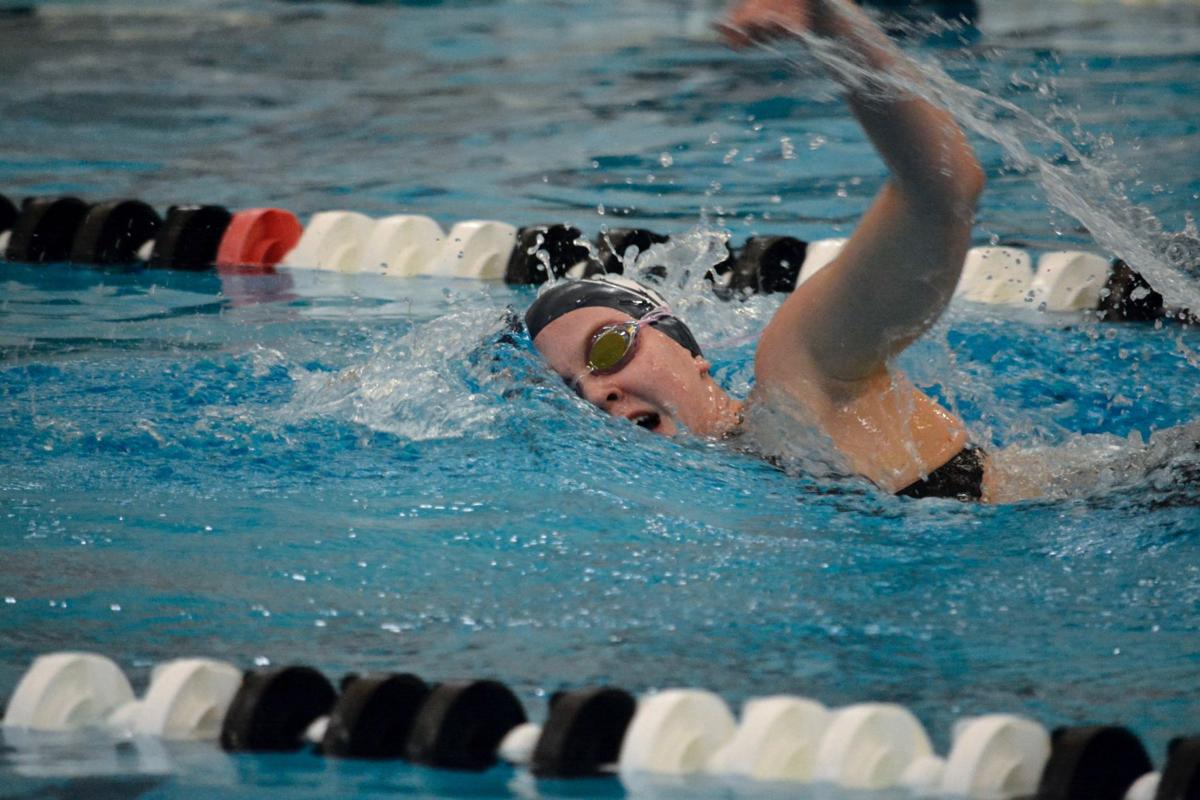 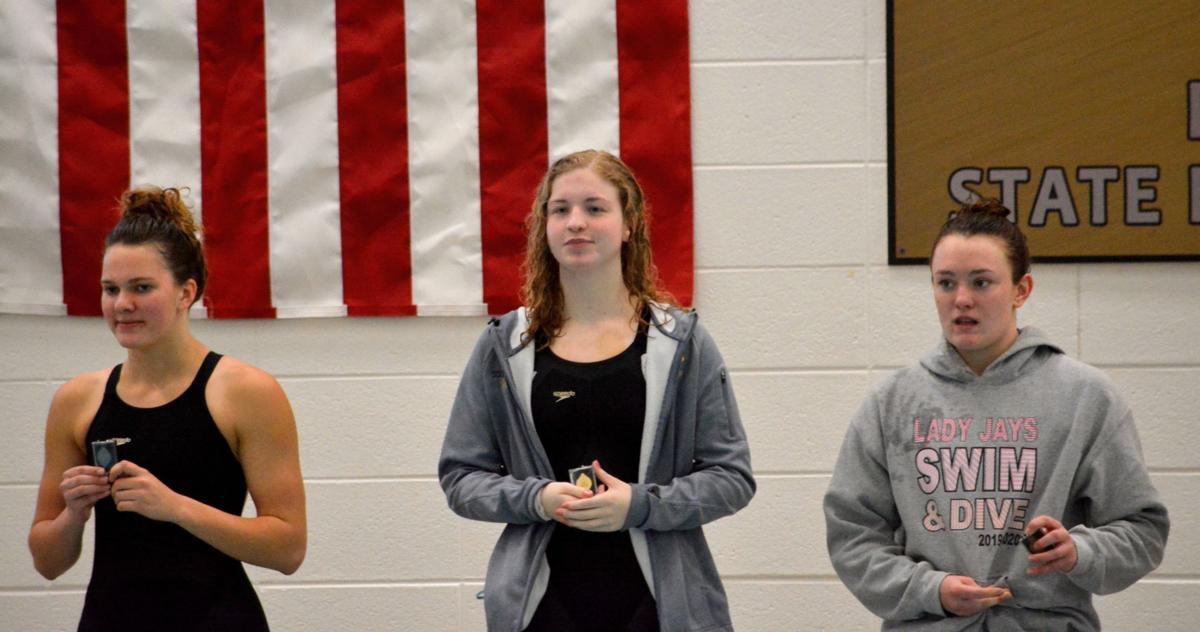 The Liberty North girls swim and dive team knew they were performing at the level needed to repeat as conference champions. The Eagles just didn’t know if they would be able to hold off a surging crosstown rival in the Liberty Blue Jays.

The two teams pushed each other to break — and in a few instances shatter — multiple personal, school and conference records. But Liberty North was able to hold on and keep its Greater Kansas City Suburban Conference Red Championship crown with 446 team points during the finals on Saturday, Feb. 8. Liberty finished second with 417.

“(Winning conference) means a lot,” Eagles coach Mark Warner said. “It’s been our goal. We won it last year, which was the first time in four or five years. So the girls wanted to come back and experience it again. The bigger focus now is state.”

The Eagles were led by a group of reigning individual conference champions. Sophomore Ainsley Dillon once again took home the gold medals for the 50-yard freestyle, where she set the conference record, and the 100-yard free. Senior Kate Huyser repeated as 200-yard free champion while also adding first place in the 500-yard free.

Senior Julia Blanchard was unable to retain her top spot in the 100-yard butterfly but broke her own school record to take home the silver medal.

“I think what really helped us is the whole team got behind each other,” Huyser said. “We had a goal in mind and just getting each other pumped up before each race really got us all in the right mindset.”

The Eagles needed that mindset as Liberty kept the score extremely close throughout the finals. But Liberty North was able to seal the victory due in large part to some tight finishes in relay events. The Eagles relay team of Dillon, Blanchard, Huyser and senior Bryn Mattes set conference records in the 200-yard and 400-yard free.

But the Blue Jays were right behind them in second place. Senior Madi Carmichael, junior Kate Minette and senior Christina Rangel were in both events along with senior Kate Towns in the 200 and junior Ellie Hartwig in 400. Both relay teams set school records, with the 400 team beating the previous best time by more than three seconds.

The rival teams both pointed to the competition between the schools as the reason for so many record-breaking finishes.

“(Liberty coach Chris) Murphy and I were just talking about how we don’t think either one of our teams would have swam as fast as they did today, especially in those relays, if we didn’t have each other to push,” Warner said. “And really we’ve been going back and forth all year, so we knew that today was going to be a big day for both relay teams going against each other.”

Although the Blue Jays lost to a rival that shares the same practice facility, Liberty was still proud of their achievements at the conference meet.

“The girls will never be satisfied with second place. I think they are satisfied, or should be satisfied, with how they swam,” Murphy said. “Because we had nearly 100% (personal) best times during the weekend, broke school records and just did a lot of good stuff.”

“It’s just nice to see all the hard work you put into practice and the weights that you do outside of practice finally show in your races,” Hartwig said. “It’s very rewarding.”

The Blue Jays’ performance was even more impressive considering Hartwig and her teammates spent most of the week battling the flu. Hartwig said she hadn’t been in the water since the previous weekend.

“I think we had a couple girls that weren’t feeling well, including myself,” Hartwig said. “I think that if we can get everybody well … it’s just a matter of who wants it more when it comes down to it.”

The Blue Jays will have a few weeks before they will have another opportunity to see what they can accomplish at full health at the biggest event of the season.

“We all worked hard this season. ... We’ve broken records earlier this season, but breaking them tonight just pumped us all up for state,” Carmichael said. “Knowing we can do that, I think it’s just going to motivate us even more for state.”