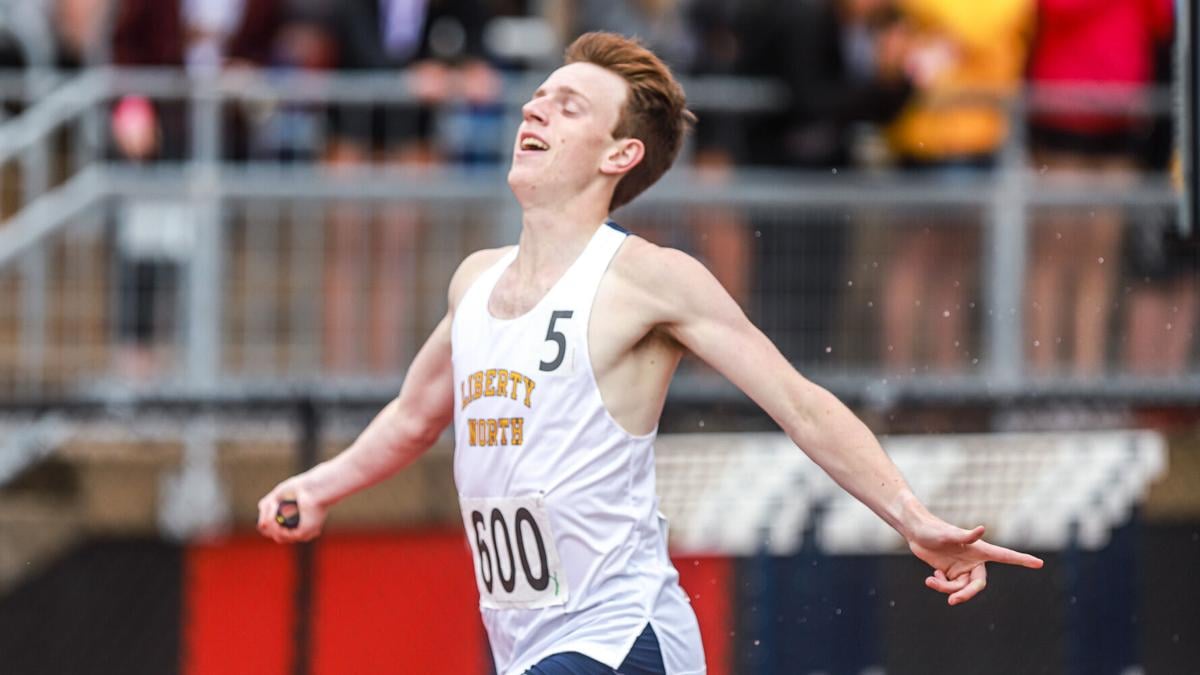 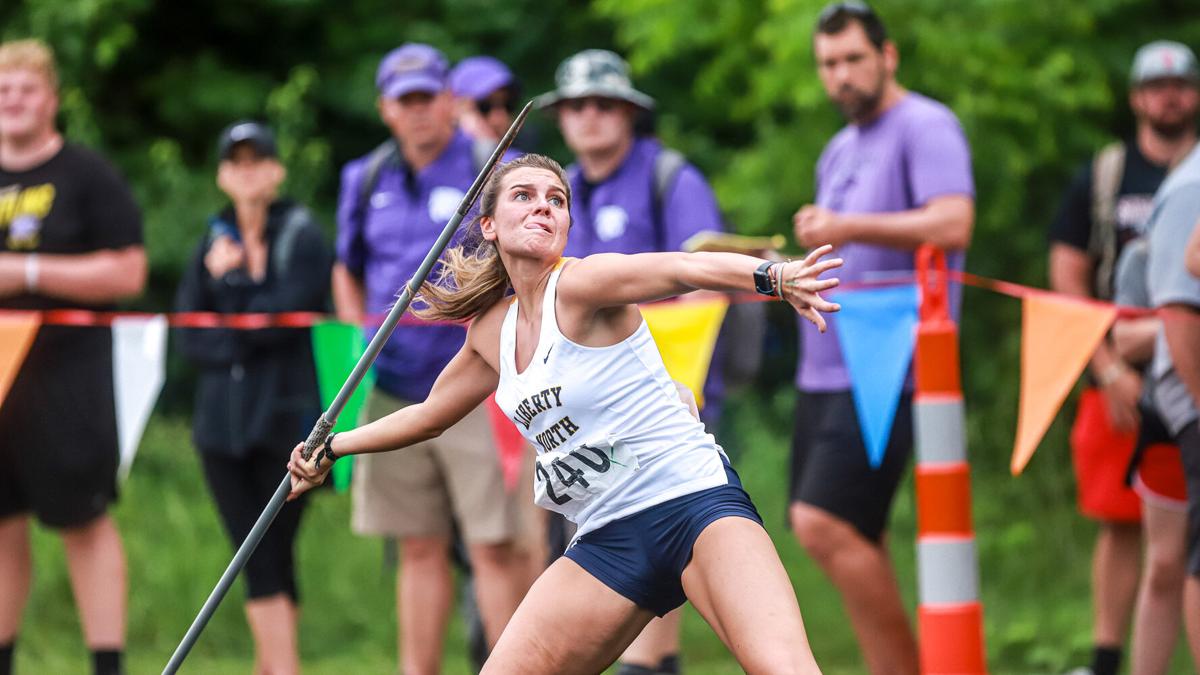 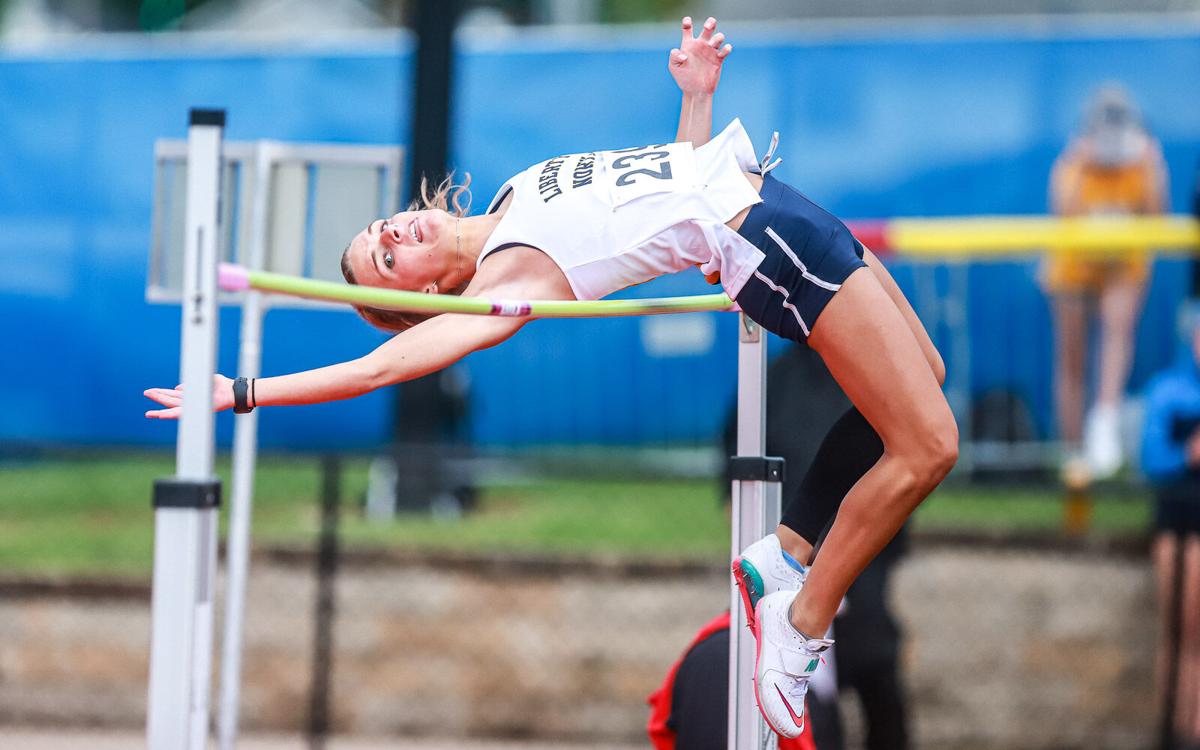 Liberty North senior Olivia Henkel starts to clear the bar on the high jump during the Missouri Class 5 track and field state championship meet Thursday, May 27 at Adkins Stadium in Jefferson City.

Liberty North senior Olivia Henkel starts to clear the bar on the high jump during the Missouri Class 5 track and field state championship meet Thursday, May 27 at Adkins Stadium in Jefferson City.

LIBERTY — The Liberty North track teams brought home a lot of hardware as the team took all-state spots in 10 events at the state meet and Eagles boys finished 1 point shy of securing a team trophy.

Ethan Lee continued to steal the show for the Eagles as the junior won four state titles. Lee earned two individual gold medals, winning the 800-meter run and the 1600-meter run, to go along with his two first-place relay finishes in the 4x400 and 4x800 relays.

Lee showed record-breaking speed, but only after his epic day was brought to a full stop as a weather delay pushed back the start time of the 4x800-meter relay by two hours. The Eagles middle distance runner seemed to replace the lightning that cleared from the skies to restart the meet.

The first three runners trailed Hickman for the lead by just one second when sophomore Grayson Tapp handed the baton to Lee.

That lead was not nearly enough.

Lee followed up by taking gold in the 1600-meter run. He stayed right outside the top spot for the first three laps before earning a 58.85 seconds mark on the final lap to finish with a 4:17.39, a full second ahead of runner-up Matthew Hauser of Rock Bridge.

He also waited until the last lap of the 800 meter to pull ahead, although he did so by maintaining an even 56.92 split. His time of 1:53.84 set his new PR and re-set the school record for the fourth time this season after breaking it in the season opener.

The other half of Liberty North’s dynamic duo of middle distance runners, Perez, finished fifth with a time of 1:56.19. Lee and Perez own the top 14 times for the 800 meter in Eagles time history.

Lee wrapped up his fourth state title with the race that wrapped up the state meet, the 4x400-meter relay. Senior Elias Ealey joined Lee, senior Luis Perez and senior Cade Gardner on a team that held first from start to finish as they ended up with a 3:21.36 time, providing sufficient padding ahead of runner-up Liberty’s 3:24.01.

Ealey and Tapp both earned gold medals in their first high school track seasons, with Ealey competing in track for the first time as a senior and Tapp missing his freshman campaign when last season was canceled due to the COVID-19 pandemic. Ealey also took 10th in the 400-meter dash with a time of 50.99.

Liberty North girls were only able to advance five competitors to the state track meet, but each one of them made their appearance count. All of the Eagles girls earned all-state honors by finishing in the top seven.

Senior Kaitlin Peek took the best finish of the bunch, earning third place in the discus with her throw of 42.15 meters. Peek reset the Liberty North girls discus record for the fourth time this season after breaking in the season opener. She topped her previous PR of 40.44 meters from the Falcon Relays in April while also improving by nearly two meters from her best postseason throw this season.

Junior Kayley Lenger took fourth place in the javelin with a throw of 38.47 meters. Lenger has continued to deliver in the postseason despite needing to wear a walking boot and needing to limit her approach on her throws.

She held third place after her second throw and looked to stay there until McKenah Sears of Grain Valley edged her out of the spot by one meter on the second to last throw.

Senior Olivia Henkel finished tied for fifth in the high jump by clearing 1.60 meters. Henkel has not been able to top her 1.67-meter mark from the Ron Ives Invitational back on March 26, but she crossed the 1.6-meter threshold three times in four postseason events. Henkel took fourth in the event as a sophomore in 2019 by clearing 1.52 meters, a mark she has eclipsed in all but one event during her finals season with the Eagles.

Senior Elaina Gorton rounded out the medal winners by taking seventh in the shot put with a mark of 11.51 meters. Gorton could not quite replicate her recent performances where she cleared at least 11.73 meters for the last four meets, including setting her PR at 11.9 meters the week before at sectionals.

With a small but decorated group of state performers, the Eagles accumulated 15.5 points to take 18th as a team.

Look for more state track stories on Liberty and Liberty North at mycouriertribune.com.