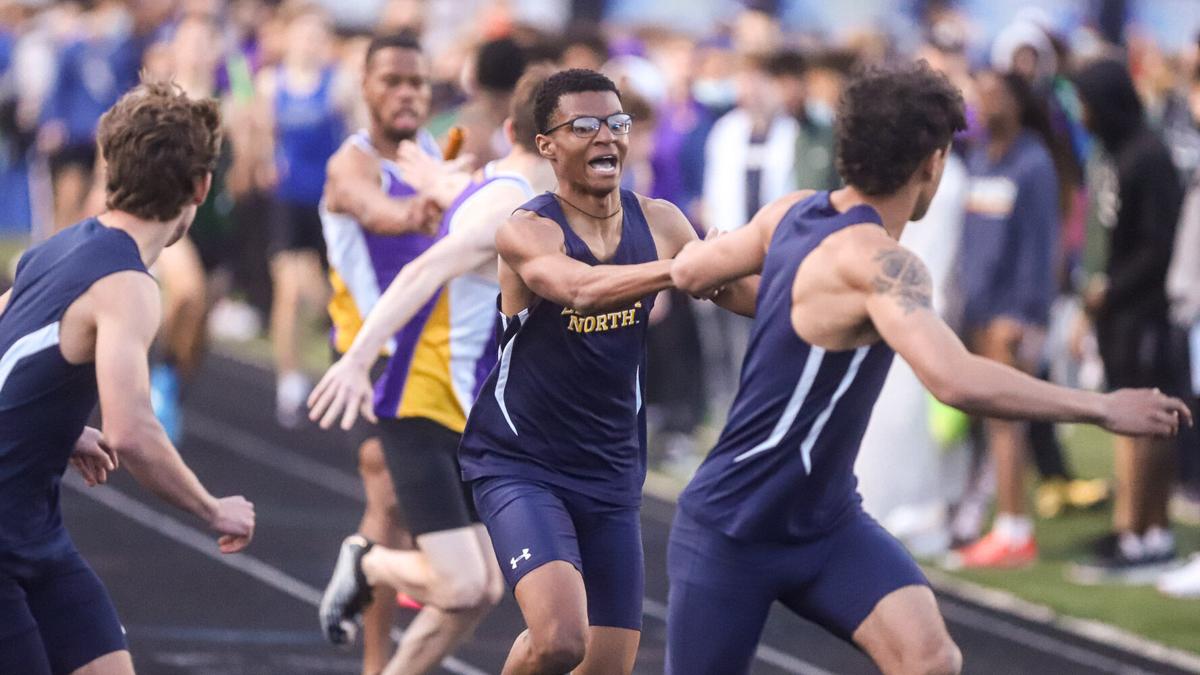 Liberty North track and field found itself ahead of the field once again as the boys and the girls teams both took first during the Liberty North Invitational Saturday, April 24 at Liberty North High School. 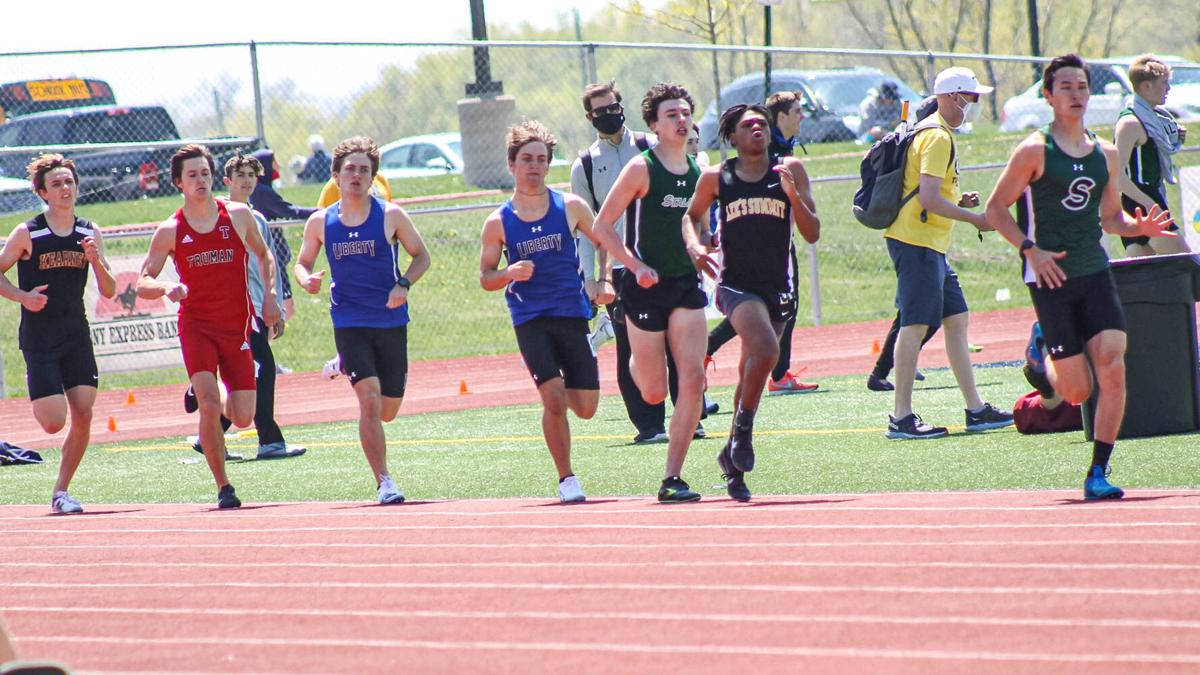 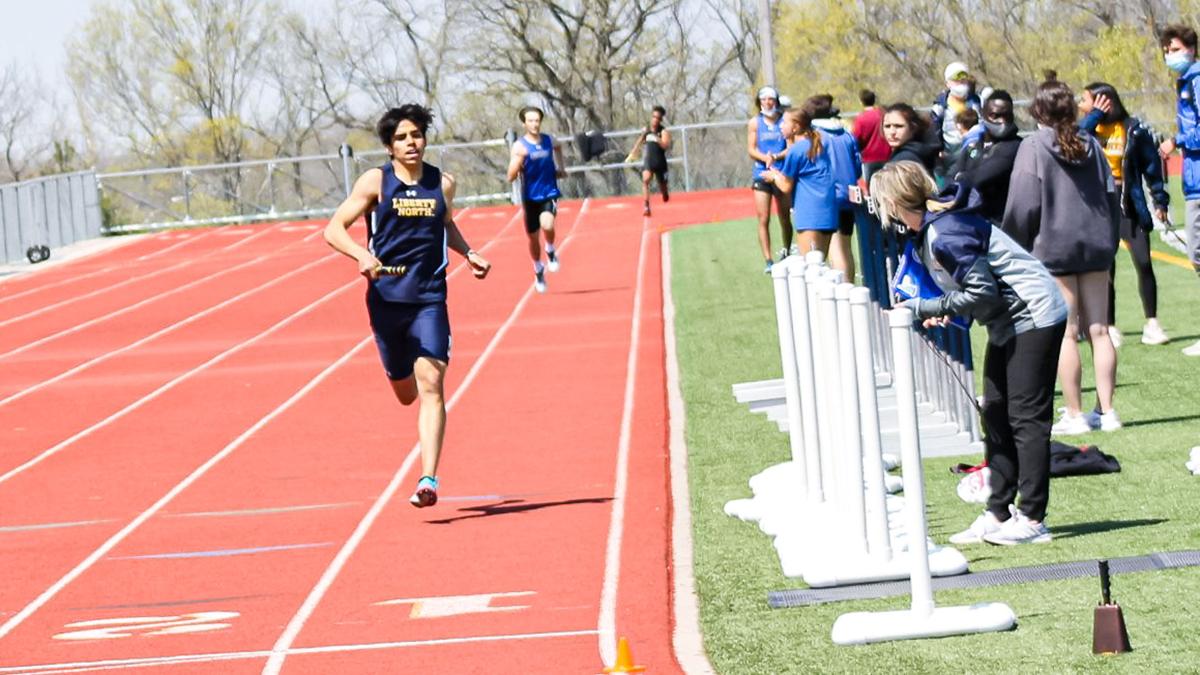 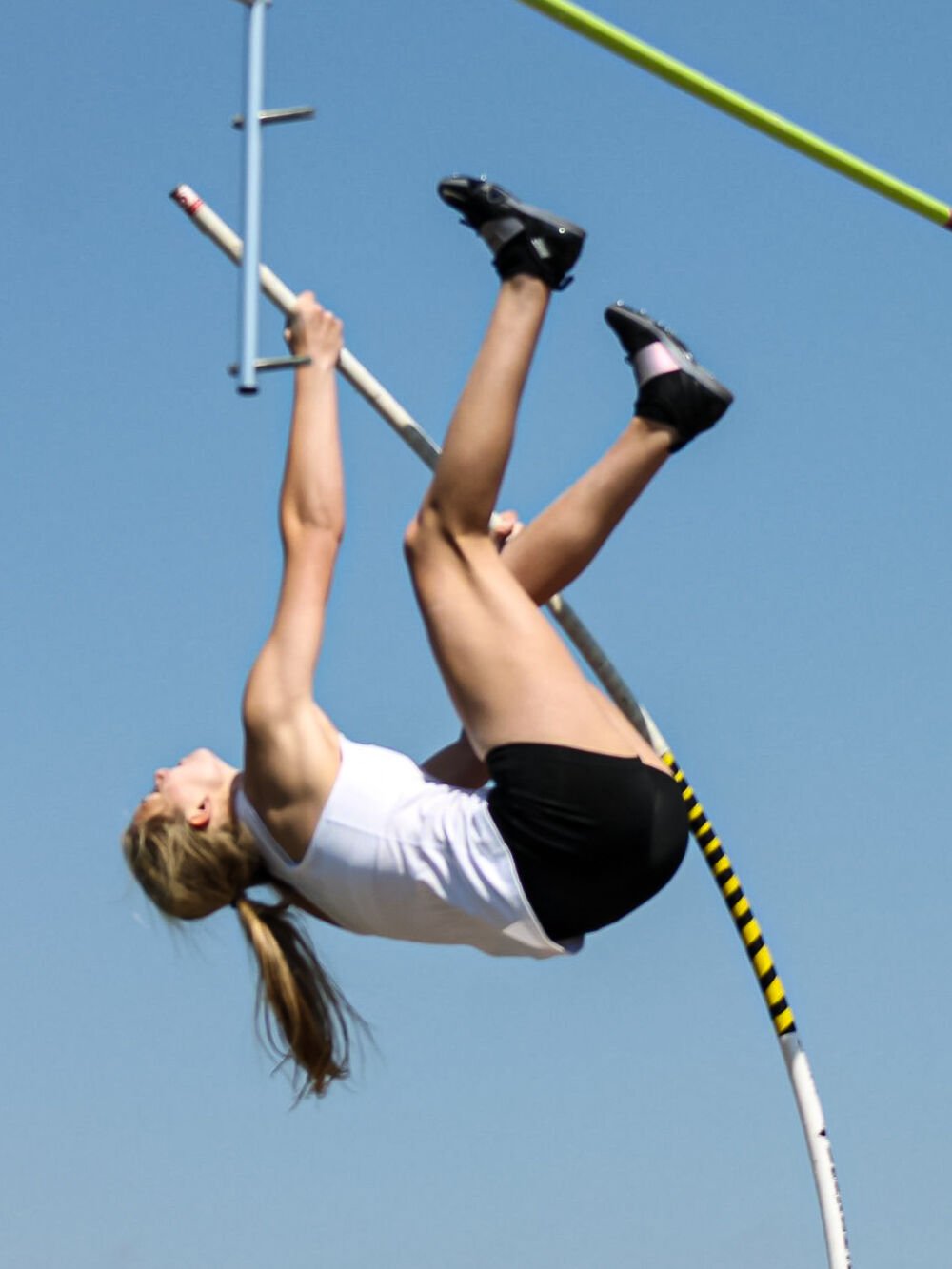 Liberty North track and field found itself ahead of the field once again as the boys and the girls teams both took first during the Liberty North Invitational Saturday, April 24 at Liberty North High School.

LIBERTY — Liberty North track and field found itself ahead of the field once again as the boys and the girls teams both took first during the Liberty North Invitational Saturday, April 24, at Liberty North High School.

The Eagles boys finished with a 180 points to second-place Liberty’s 171.5 while the girls team earned 154.4 points to stay ahead of St. Teresa’s Academy at 145.5 points.

The boys sealed up their meet when junior Ethan Lee, senior Luis Perez and sophomore Grayson Tapp swept the medals stand in the 800-meter relay. Lee and Perez were less than a second apart as Lee finished with a time of 1:57.71 while Perez finished in 1:58.30. Lee has won each 800 race so far this season and holds the top time in the state.

Lee also remains undefeated in the 1600-meter run after he finished first with a time of 4:24.10. Tapp took second in the race with a time of 4:36.15 to narrowly edge Luis Perez at 4:36.18, who had tied with Andrew Atkins of Staley for a tie battle at the finish line.

Those three Eagles were as impressive in the 4x800-relay race as they were joined by senior Cade Gardner to take first with a time of 7:58.31, which is the top time in the state by eight seconds over second-place Blue Springs High School.

Lee, Perez and Gardner were joined by senior Elias Ealey to set the top state time in 4x400 as well, taking first at the event with a time of 3:23.61. The Eagles other two relay teams took second place during the event.

Senior Weston Edwards gave the Eagles another performer who has yet to settle for anything other first place in one of his events. Edwards notched 4.7 meters in the pole vault to win the event in which he holds the top spot in the state.

Sophomore Calen Presser won the javelin with a throw of 42.66 meters.

Freshman Sage Wilde gave the boys another second place with his finish of 9:49.03 in the 3200 meter. Sophomore Eric Henkel tied for third in high jump with a leap of 1.77 meters while senior Isaac Langford took third in the 300-meter hurdles.

The girls team held off a surging St. Teresa’s Academy. Senior Jane Watts got the Eagles started strong by taking first in the 100-meter dash with her time of 12.70, setting her new PR.

Junior Kayley Lenger remains undefeated in the javelin as she won with a throw of 36.42 meters. Senior Olivia Henkel took first and junior Bella Zimmerman took third in the high jump with both clearing 1.57 meters.

Sophomore Kylie Chester, junior Ashi Jose, junior Becca Hall and Watts took second in the 4x100-meter relay with a time of 52.02. The same group took third in the 4x200 race.

The Liberty boys finished without the first-place trophy for the first time this season, but the Blue Jays were not far back as their 171.5 points put them in second place.

Senior Javion Byers took first in the high jump with a leap of 1.88 meters. He earned another individual medal when his personal-record 6.49 meter long jump resulted in a second-place finish.

Senior Matthew Henning won the shot put with his throw of 16.95 meters.

Sophomore Ryan Hale took third in the javelin with a throw of 40.36 meters.

Senior Clay Carbajal took third in the high jump with his leap of 1.77 meters.

The Liberty girls found themselves in third place by accumulating 123.5 points.

The 4x800-meter relay team of junior Olivia O’Reilly, junior Sasha Hough, junior Grayce Kilkenny and sophomore Britta Foust earned the best finish for the girls team by taking first with a time of 10:09.13, edging out the Eagles by 2.5 seconds.

Sophomore Natalie Hill earned runner-up in two events, completing the 300-meter hurdles with a time of 50.59 and earning a 10.39-meter mark in the triple jump.

O’Reilly added another medal finish by finishing the 800 meter in 2:31.26. Alyssa Richmond earned runner-up in the discus with a throw of 36.48 meter. Sophomore Morgan Cannon finished second in the javelin with a throw of 33.82, setting her PR by nearly four meters.

The Kearney boys finished third in the race at 106 points while the girls finished sixth with 66.2 points.

Sophomore Zach Proctor finished second in the high jump with a leap of 1.82 meters, setting his PR.

Junior K.J. Smith finished as runner-up in two events: discus and shot put. He earned a throw of 45.69 meters in the former and 14.09 meters in the latter.

Sophomore Zachery Grace finished in third behind Smith in both of those categories, throwing 45.05 meters and 13.9 meters, the latter being his PR in the shot put. Grace also set his PR in the 110-meter hurdles with his time of 16.19.

Sophomore Ava Lawless gave the girls their two medalist performances by winning the triple jump and taking second in the 100-meter hurdles. She won the triple jump by setting her PR with a leap of 10.84 meters. She finished the 100 hurdles with a time of 16.92.