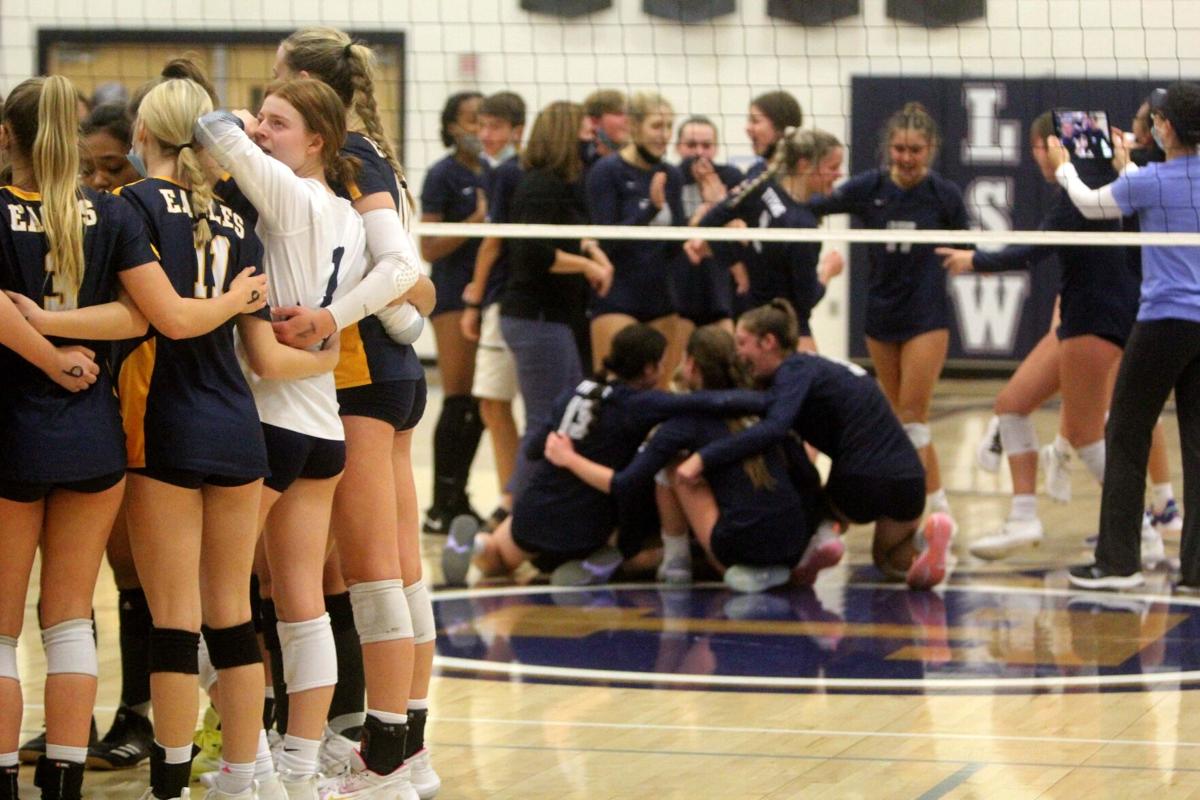 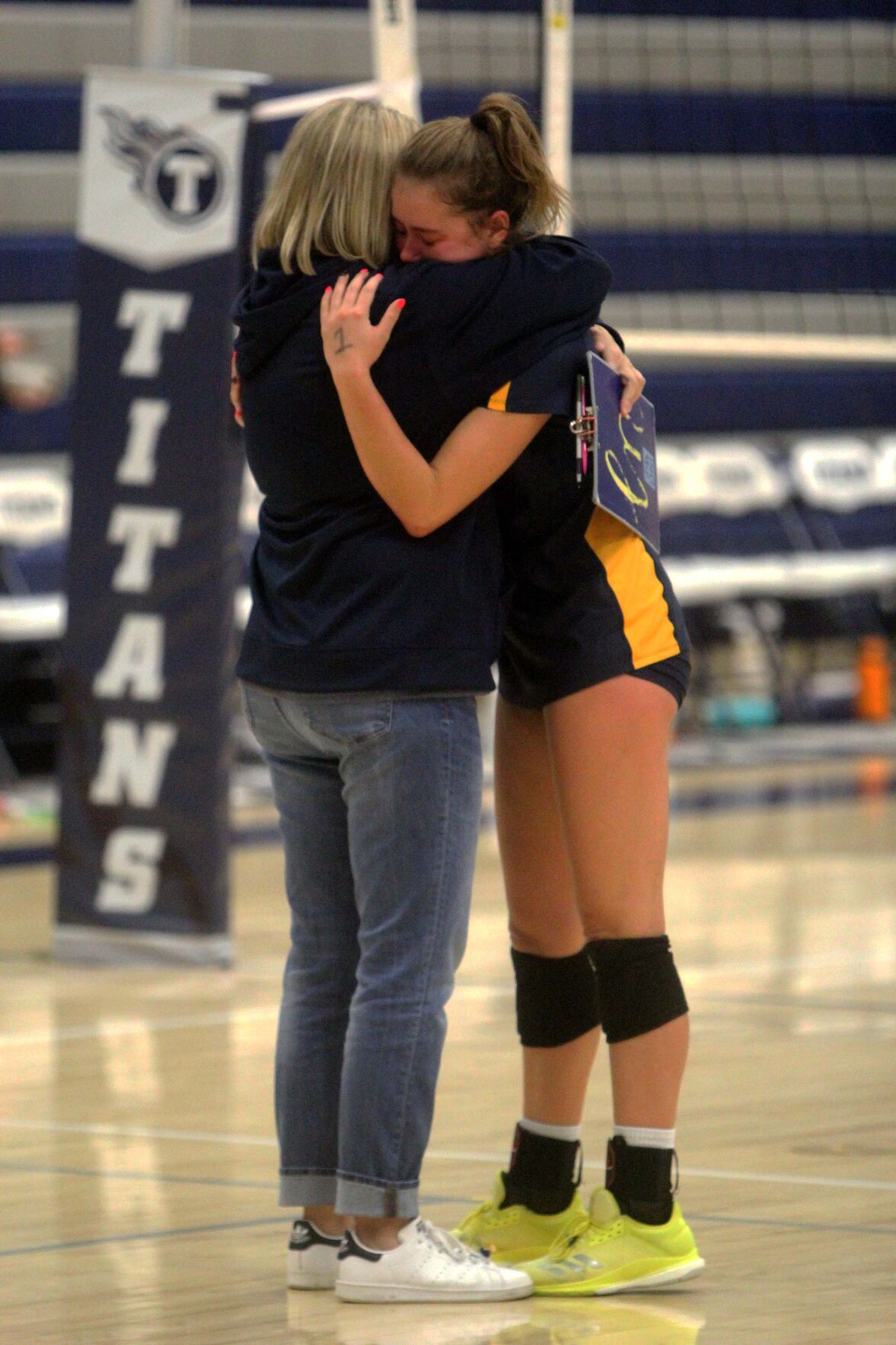 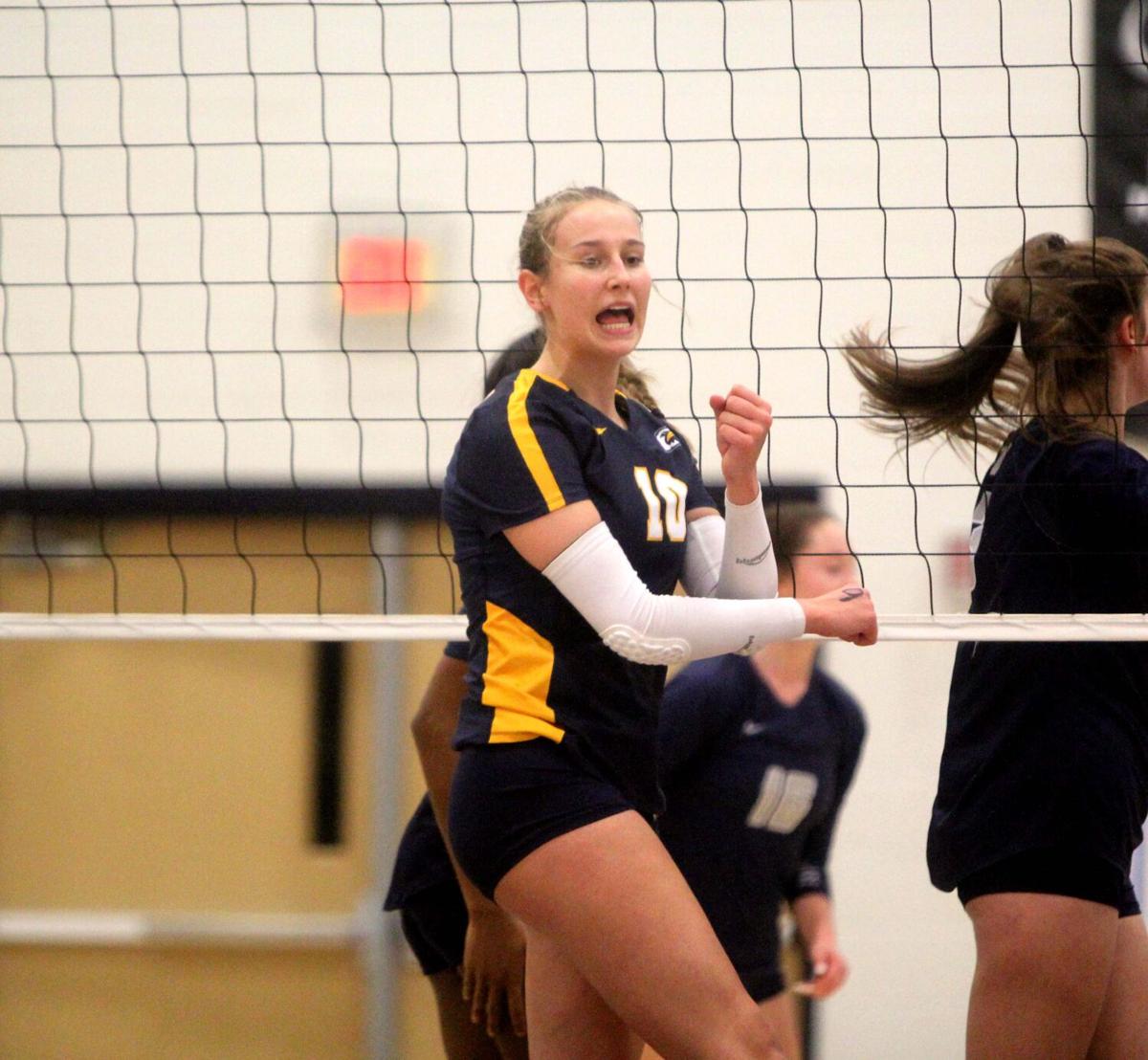 Liberty North's Isabel Zimmerman celebrates after scoring a point against Lee's Summit West during the state quarterfinals on Saturday, Oct. 30.

Liberty North's Isabel Zimmerman celebrates after scoring a point against Lee's Summit West during the state quarterfinals on Saturday, Oct. 30.

When you are a team of rhythm and strict schedules like Liberty North’s volleyball team any little thing can throw you off. On Saturday, Oct. 30, the Eagles’ bus was delayed to pick them up for their state quarterfinal matchup against Lee’s Summit West.

The team is dedicated to the same warm-up and routine each game as they settle in on away games, head coach Katie Dowden shared. But, in the opening set against the Titans, the Eagles were loose and ready to play.

“They came out really relaxed and composed,” Dowden said. “We were really confident, but this game is a game of momentum and mistakes. Things can change on a dime.”

The mistakes were minimal for Liberty North in set one as the Eagles won 25-13 in dominant fashion. Then both teams went blow for blow as the day reach a fifth set. The Titans were able to win set two 27-25.

In set three, Liberty North bounced back to win 26-24 as the Eagles ended the set on a 14-5 scoring run. In set four, the Titans answered by winning 25-22 to set up the crucial fifth set.

This was Liberty North’s second fifth-set game of the week. The other resulted in a come-from-behind win over Liberty. This time the fifth set would not be as kind to the Eagles.

Liberty North started strong, taking the lead, but the Titans were able to come back. The points would go back and forth, culminating in a 10-10 tie game.

The Titans scored the next three points, including a controversial point where Liberty North’s attempted kill ended near the back line of Lee’s Summit West’s. Both line judges called for an Eagle point, but the head referee believed differently and called for the Titan point.

With the momentum securely with Lee’s Summit West, it was going to be hard to come from behind as the Titans won the fifth set 15-13 to end the Eagles’ season.

“The thing that the Titans capitalized on was the speed on our blocks,” Dowden said. “They ran a quick slide and we struggled with it significantly. Hats off to them.”

As the Liberty North team left the court for the final time, one player didn’t want to leave, captain Addison Beagle. For what felt like hours, Dowden and Beagle embraced each other, feeling emotions of heartbreak and sorrow, knowing that this was their final game together.

Beagle, Dowden and the rest of the Eagles volleyball team will go down as one of the best teams in school history, amassing a record of 32-4, including a district championship and an undefeated record against rival Liberty.

“These guys have something special and they demonstrated that all season long. I wanted the state championship even more because of all the adversity that we have gone through,” the coach said. “They are the good in our world and they are going to be tremendously successful in everything they do.”