You are the owner of this article.
Edit Article Add New Article
You have permission to edit this article.
Edit
Home
News
Sports
Obituaries
Opinion
Announcements
Special Sections
Multimedia
Marketplace
Contests
Info
1 of 8 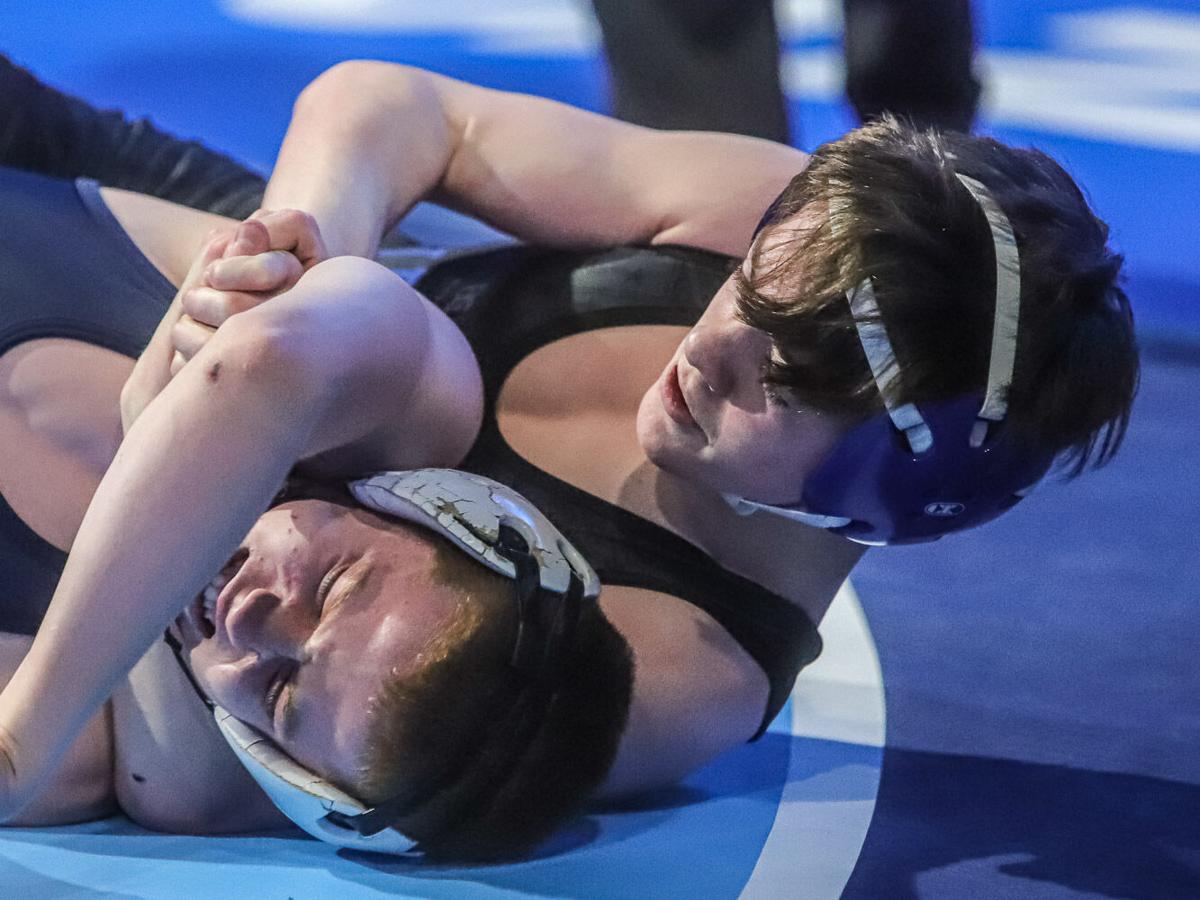 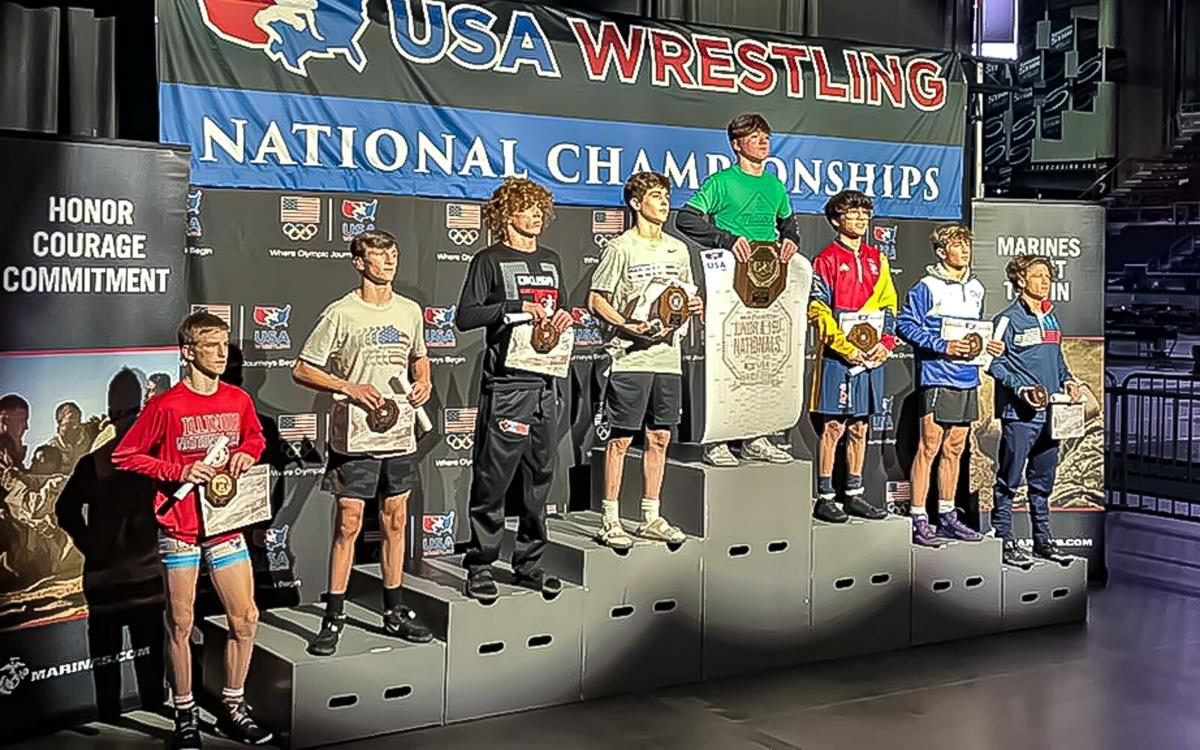 Liberty sophomore-to-be Hunter Taylor holds up his first-place medal and bracket after winning the 106-pound division in junior freestyle at the U.S. Marine Corps U16 and Junior Nationals in Fargo, North Dakota. 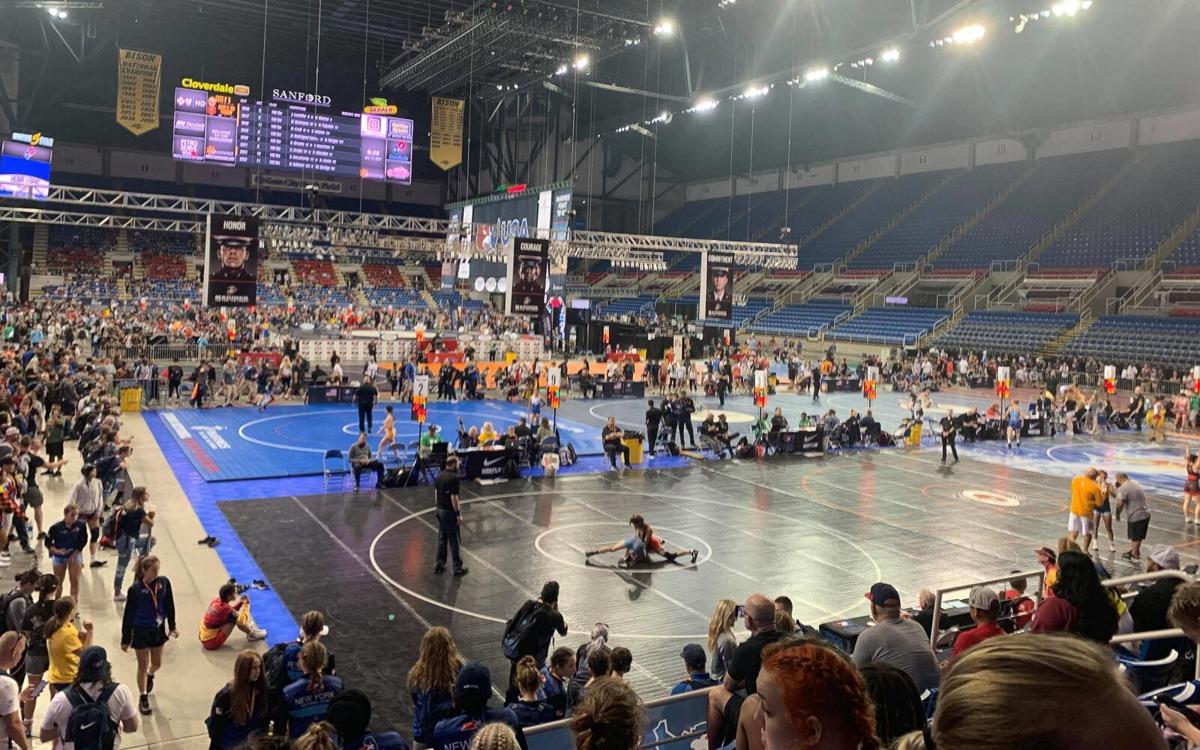 Wrestlers compete during the U.S. Marine Corps U16 and Junior Nationals in Fargo, North Dakota. 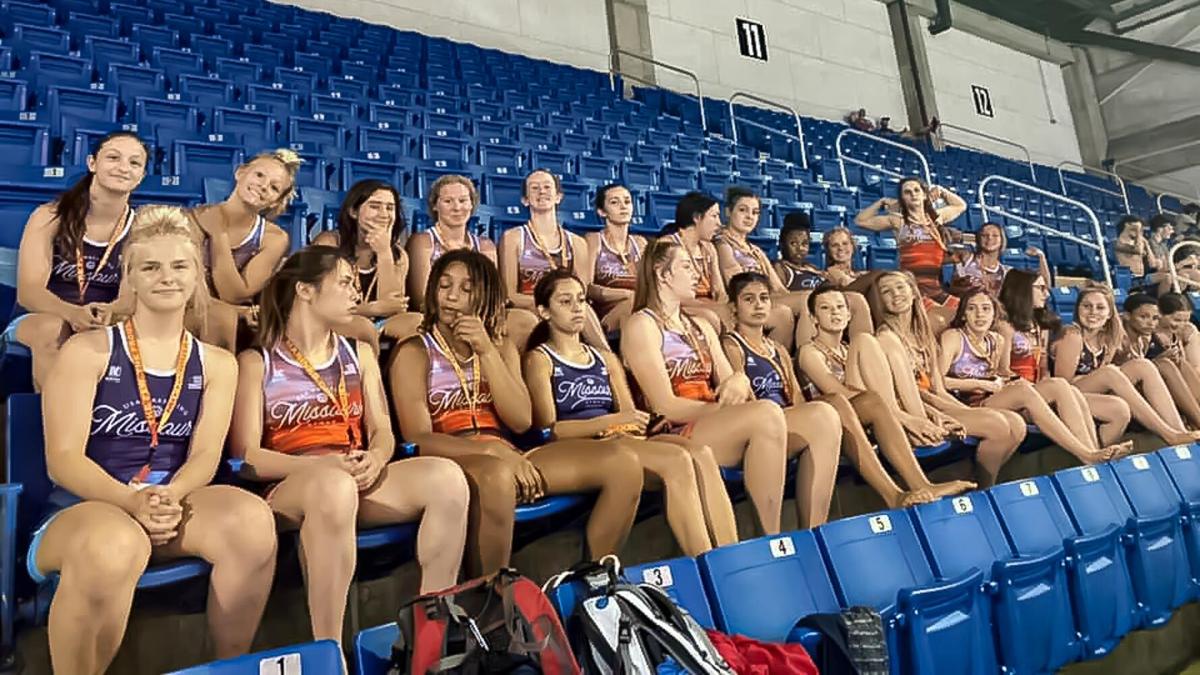 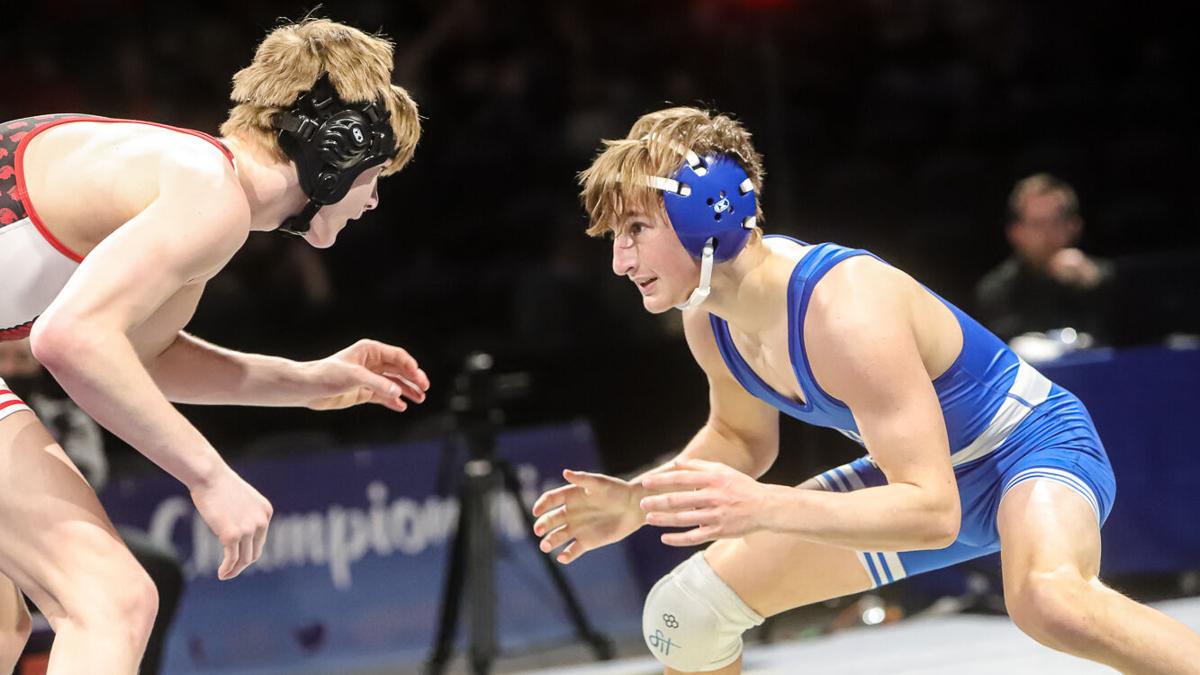 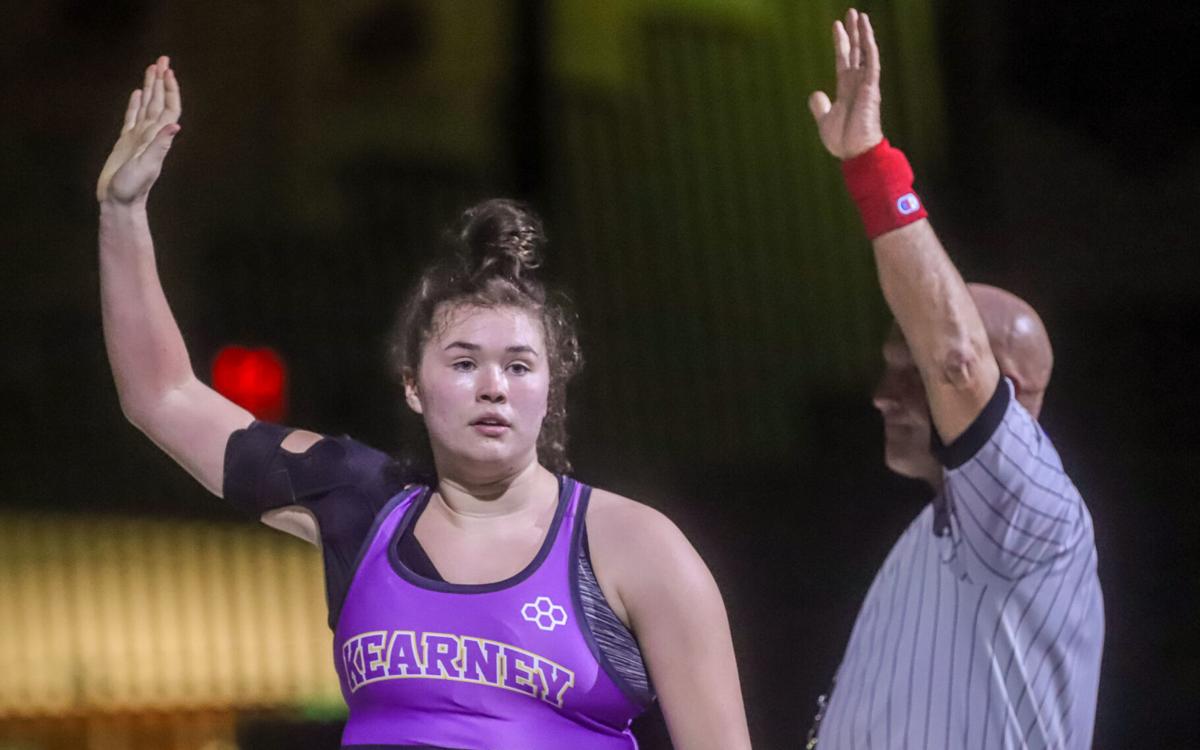 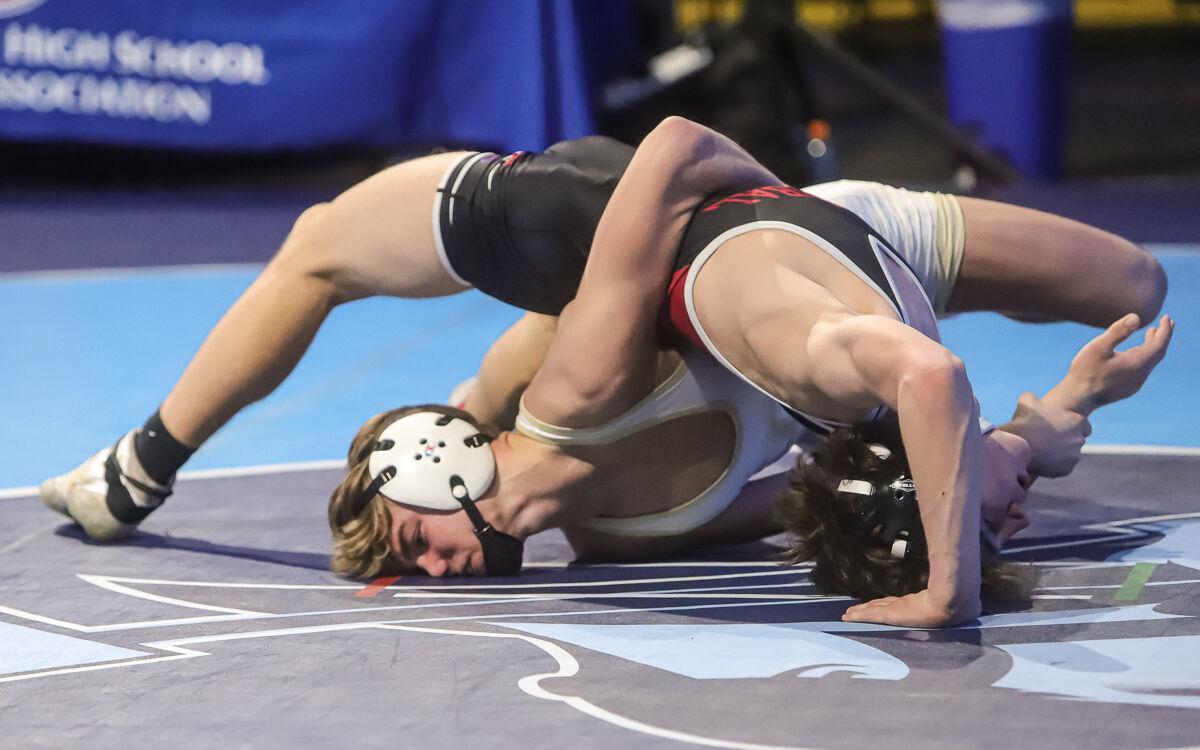 Liberty sophomore-to-be Hunter Taylor holds up his first-place medal and bracket after winning the 106-pound division in junior freestyle at the U.S. Marine Corps U16 and Junior Nationals in Fargo, North Dakota.

Wrestlers compete during the U.S. Marine Corps U16 and Junior Nationals in Fargo, North Dakota.

LIBERTY — Liberty wrestling brought a large contingent of competitors to its annual trip to Fargo, North Dakota, and the numbers paid off for the team in all-American honors.

Sophomore-to-be Hunter Taylor became the national champion in the 106-pound division for junior freestyle. Taylor said he’s had his sights set on winning at this event for a long time.

“I’ve been dreaming about this since I was little,” Taylor said. “I was probably 10 when I first heard of Fargo. To win it now, it feels pretty good.”

He racked up a total point differential of 62-13 over six matches, including a 10-0 win by the 4:21 mark of his first-place match against Brandon Mortar of Minnesota. Taylor, who won all but one of his high school matches during his freshman campaign, left little to doubt after a 3-2 loss in the state semifinal left him with a bronze medal.

Taylor said his state loss definitely impacted how he prepared for a return trip to Fargo after taking sixth in the U16 freestyle last year.

“It drove me,” Taylor said. “A lot of what I did to train for Fargo (was) just thinking about losing at state.”

Sophomore-to-be Christopher Coates had the opposite circumstances as the Missouri Class 4 120-pound state champion became the 132-pound national runner-up in the 16U freestyle. He narrowly lost the finals match against Zach Hanson of Minnesota in a 2-1 finish. Before that, Coates outscored his opponents 53-11 in his first six matches.

Incoming freshmen Devon Harrison and Peyton Westpfahl rounded out the all-American designations with their performance in the U16 freestyle. Harrison went 3-4 and took sixth in the 94-pound division while Westpfahl went 7-3 to take seventh in the 160-pound division.

Liberty took nine boys and two girls to the event, which is the most competitors making the trip to Fargo in the program’s history.

Dutton made a run to the quarterfinals before losing a pair of 2-point decisions, first a 10-8 loss to Nicco Ruiz of California and then Benjamin Alanis of Arizona.

Kage Lenger advanced to the round of 16 thanks to a 7-6 victory and a pin at the 2:14 mark of a match tied 4-4. Lenger fell to the backside of the bracket after a 12-1 loss to Jude Swisher of Pennsylvania. Lenger also went 2-2 in the 138-pound division of the junior Greco Roman division.

Senior-to-be Logan Rathjen went to the backside of the 145-pound bracket after a 12-1 loss to Noah Tolentino of California in each competitor’s first match. Rathjen followed up with a 15-5 win over Tyler Jones of Idaho and a pinfall victory over Gabriel Pugh of Wisconsin before losing his last match 15-9 to Alex Frowert of Virginia.

Senior-to-be Easton Hilton won his opening match in the 138-pound division of junior freestyle with a 12-2 win over Kendell Cummings of Wyoming before losing his next match 13-1 to Kimo Leia of California. Hilton closed out with 10-0, 6-2 and 10-7 wins before dropping his final match 10-0 to Julian George of New Jersey.

Junior-to-be Cooper Rider held a 8-6 lead over first round opponent Ethan McCullough of Georgia, but ended up suffering a pinfall defeat. Rider followed up by splitting 10-0 technical falls, first as a victory over Nathan Curry of Washington before losing to Markel Baker of Illinois.

Sophomores-to-be Jaden Breeden and Julia Breeden saw action in both the 16U and junior freestyle girls events. Although the twins weren’t able to pick up a victory in Fargo, the young duo gained valuable experience for a pair that won 64 matches during their freshmen campaigns.

Cole earned two pinfall victories to reach the finals, first to close out a match she led 8-0 against Karla Padilla Zepeda of Utah and then to avoid a potential decision in a 4-4 battle with Madeleine Wadesisi of Ohio in the semifinal. She faced a 9-0 deficit against Eliana Bommarito of Michigan in the final before Bommarito ended it with a pinfall. Cole’s finish earned her all-American status for the second time in her career, and made her the only Kearney girls wrestler to make all-American in program history.

Kearney’s other three-time state champion, senior-to-be Eli Ashcroft, picked up one win before falling to the backside of the 138-pound bracket in the boys junior freestyle with a 11-1 loss to Cole Rhemrev of Illinois. Ashcroft recovered with a 14-2 win over James Marvel of Florida before losing to James Latona of Alabama 6-3.

Smithville sophomore-to-be Alex Hutchcraft and junior-to-be Kolby McClain earned the top results of the five the Warriors who traveled to Fargo. Hutchcraft and McClain both won their opening matches before losing their final two matches.

Hutchcraft took a 6-0 lead of Easton Hull of Wisconsin before ending the match early with a pinfall. He went the full match time with Wanderlei Whittington of California with Hutchcraft earning the 7-4 decision. He lost a 10-0 technical fall to Damarion Ross of Iowa and a 6-3 fall to Drew Moser of Nebraska.

McClain earned a 1-0 technical fall over Parker Hayes of Utah before holding onto a 6-3 decision over Cash Raymond of Minnesota. McClain slid to the backside of the bracket thanks to a 1-1 stalemate going to Jacob Brunner of Puerto Rico for scoring the last point.

Muir also went 1-3 in the junior Greco Roman bracket. Hutchcraft lost both his U16 Greco Roman matches while McClain went 1-2.

Sophomore-to-be Noellie Parrott and senior-to-be Emily Knight represented the Warriors in the girls brackets, although neither was able to pick up a victory.

After a 6-11 freshman campaign, Parrott has pushed herself outside her comfort zone this summer in an effort to grow her skills on the mat. She entered her first Greco Roman event in May and pulled out two pinfall victories to take first-place in the 127-pound division.